The Vespa looks even better now and gets more performance, it is India’s most powerful scooter

When we look at all the scooters available in the market, most of them look boring and just serve the purpose of commuting from point A to B. But, this has not been the case with the Vespa. The Piaggio owned Italian brand has always tried to make scooters which look the part and make a style statement. Sticking with the retro looks, they launched the first Vespa scooter in India three years ago. Over the years, they updated the same scooter and launched newer variants to broaden its appeal. However, this time they have gone a step ahead and have given the Vespa a comprehensive change which not only means visual changes but mechanical ones as well. The biggest of them is the addition of a 150cc engine to the range. So how does the extra power feel out on the roads? Read on to find out.

Motor Quest: Launched in India in 2012, Vespa scooters have managed to appeal to the niche segment they are targeted towards and the sales have been satisfactory from that perspective. The new updates to the range makes the retro scooters look fresher. 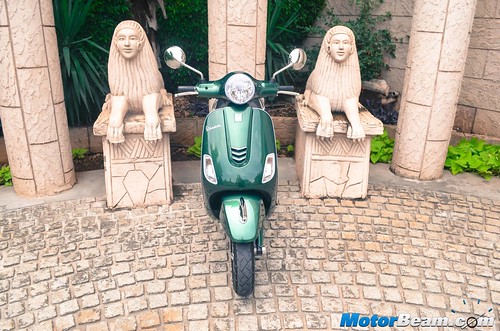 Retro styling is what Vespa scooters have been known for

Styling – Styling has always been the forte of the Vespa and it is no different this time too. Plenty of period styling elements makes one feel nostalgic but the addition of modern mechanical bits keep it in line with current crop of scooters. When the scooter was launched initially, the design was a bit tame and it looked more inclined towards the fairer sex. Sometime later, the Vespa S was launched and the changes to it made it more of a unisex scooter. This time, while the basic design is the same, many elements have been changed lending it a much more contemporary look. The square headlamps on the SXL variant combined with the square chrome mirrors help the male customers connect it with the scooters from the 1970s. Tasteful chrome bits all around the scooter add to the looks and premium feel of the scooter. 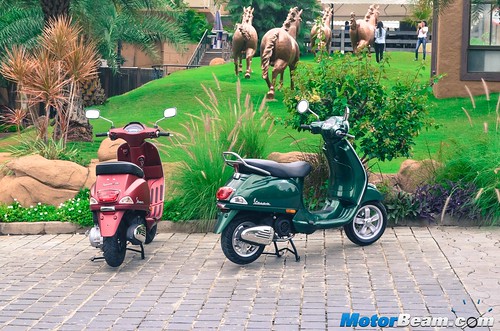 Changes to the design of the scooter include a redesigned front apron, new turn indicators, forged brake levers and a revised tail-light amongst others. One change which strikes immediately is the new 5-spoke alloys which look gorgeous and gel well with the retro styling. The only difference in terms of looks between the 125cc and 150cc variants is the badge on the right side of the scooter with the 150cc variant getting a 150 badge. Build quality is absolutely top-notch with most of the components having a premium feel. But that is something you certainly expect from a premium priced product like the Vespa. The rearview mirrors while look nice don’t provide a wide field of vision. 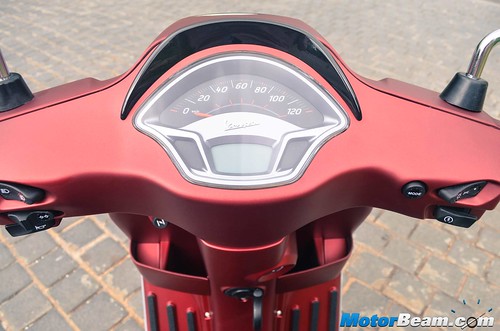 The instrument cluster has been revised, gets two tripmetres

Instrument Cluster and Switchgear – The instrument cluster on the Vespa has been completely revamped this time around and it also gets a digital display. While the speedometer is an analogue one, the odometer and date have been shifted to the digital display. Not only this, it also gets two tripmetres now and there’s a rather big mode button on the right side which lets you toggle between the same. The rest of the switchgear remains the same. Piaggio could have added a brake lock which proves to be immensely useful if one is parking on an incline or starting from one. Another feature which is still missing is a pass switch which helps one flash the headlight while overtaking in the night. Both the VXL and SXL get the same instrument cluster with the latter getting a black insert above the unit and red highlights within the enclosure. 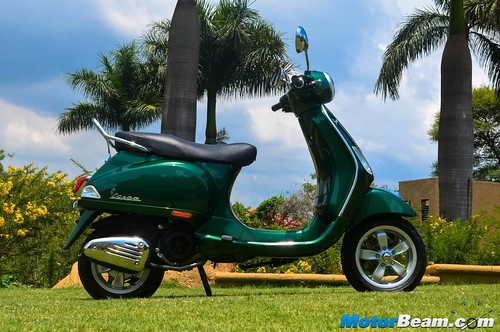 Ergonomics – Compact dimensions of the Vespa make it an easy to ride scooter and zipping in and out of traffic is fairly easy. While the seat is wide enough for most, it is a bit short. Riders which are a bit on the healthier side will feel the seat to be slightly uncomfortable since the contour on the seat for the rider is a bit towards the smaller side. Upright seating position is a given considering this is a daily riding scooter and the handlebar is placed at just the right place for people of all heights. The omission of a side stand and rear grab rail in the SXL variant adds to the looks but customers will feel short-changed after spending top money for the scooter. The positioning of switches is different from other scooters in the market and thus one needs to get used to it. 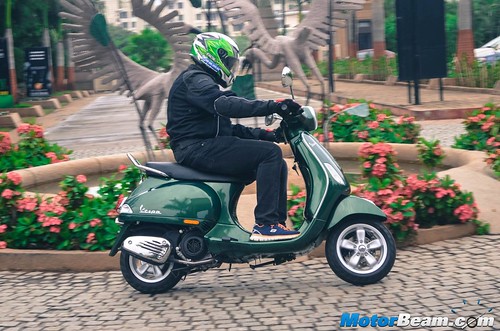 Performance – This is a topic which everyone would want to know about since the Vespa now gets a 150cc engine which produces more power and makes it the most powerful scooter in India at the moment. The new 150cc engine produces 11.5 BHP of power at 7000 RPM and 11.47 Nm of torque at 5500 RPM. This is a moderate improvement over the 125cc engine which itself makes good power. As long as you do not expect it to be a tarmac scorcher, it will please you. Out of all the scooters in the market, it is definitely the fastest but this tag comes at quite a premium. Also, the motor is not one of the most silent ones and does get noisy when the revs climb. Reaching higher speeds doesn’t take much time and it is stable at those speeds too thanks to the new tyres it rides on. 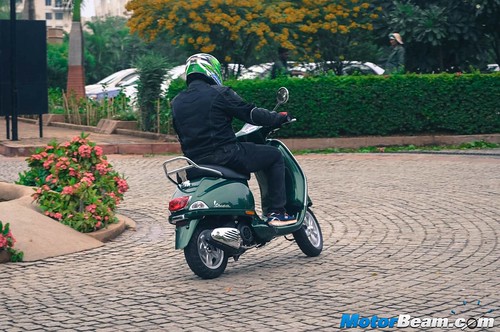 The engine combined with the sound dynamics of the scooter make sure that one doesn’t lose confidence while riding. While the 150cc engine has additional power over the 125cc, it isn’t very noticeable in city riding conditions. However, on the open roads, the bit of additional power makes itself evident making overtaking easier. Although the scooter remains vibration free for the most part, slight vibrations creep in below speeds of 40 km/hr which disappear thereafter. Crossing the ton mark is something the 150cc variants are able to do with ease and there’s still some juice left after that. 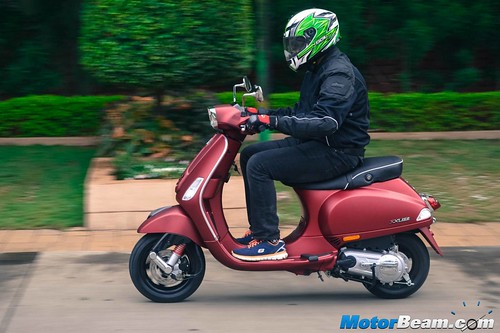 Riding Dynamics – Piaggio has tweaked the suspension of the scooter in order to address the issue of it being overly soft earlier and this has worked well. The scooter doesn’t bounce around as much as it did earlier and inspires a lot more confidence in the rider. The wheels also get a big change as not only the size of alloys has changed, the pattern and compound of the tyre has also been changed. Both the variants come with 11-inch alloy upfront and 10-inch alloy at the rear. Tyre size for the front wheel is a wide 110/70 whereas the rear tyre is even wider at 120/70. The beefier front tyre has helped in improvising the ride quality and stability at higher speeds while providing better ride comfort when riding on potholed roads. 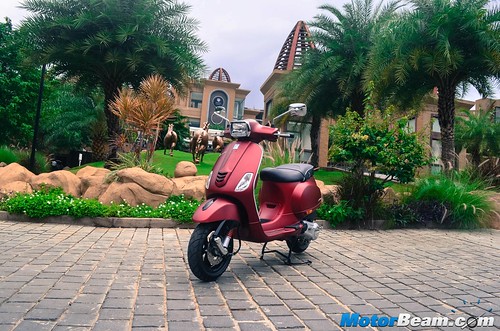 The Vespa isn’t the best or the worst in riding dynamics, somewhere in the middle

Despite not featuring a telescopic suspension at the front, ride quality is not as choppy as say the Honda Activa 110. The monoshock at the rear also does its job well by providing acceptable ride comfort. While the tyres are helpful in negotiating rough patches of roads due to their knobby tread pattern, they lack when it comes to grip in wet conditions. Since the front tyre size is unusual and no other scooter gets it, finding a suitable replacement won’t be easy either. Coming to the brakes, while the front disc brake provides good bite, it doesn’t give the feedback one would want and this can get a bit unnerving. The rear drum unit serves its purpose well and helps in shedding speeds quickly in tandem with the front disc. 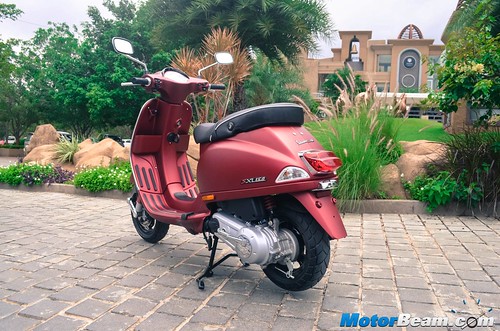 Although a quality scooter, the Vespa 150 is priced too high

Verdict – While the Vespa hasn’t changed drastically in this iteration, it does get some very useful changes which further boosts the appeal of the retro scooter. The more powerful 150cc engine has given it the required go to match the show and it also makes it the most powerful scooter in India at the moment. The suspension tweak and the upgraded tyres have added to the stability and ride comfort while the brakes provide the required stopping power. However, price is the biggest issue with this scooter and we aren’t sure how many people would be willing to shell out close to Rs. 1 lakh for the Vespa SXL 150 when many premium 150cc motorcycles are available for similar or lesser money. But for those looking out for style and convenience, the Vespa 150 is an excellent choice.

The Vespa 150 offers more power over the 125cc variants but comes at a big premium too. However, high quality components and the legacy of the brand makes the scooter worth the money for those who can afford it. 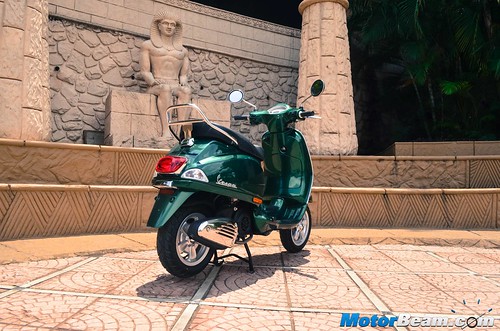 For those who want style, things don’t get better than the Vespa 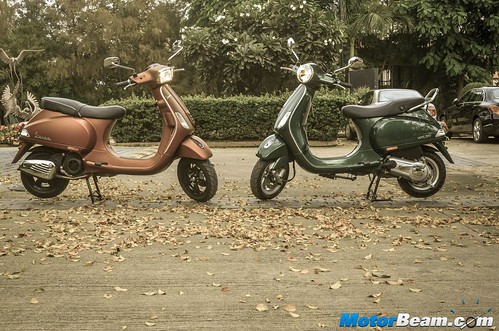