The Tata Safari was launched in India way back in 1998. It replaced the old Sierra and was one of the first proper SUVs from an Indian manufacturer. The Safari received a mid-life facelift after a few years when the DiCOR version was launched. Tata then went on to introduce the Safari Storme in 2012 and it was a big upgrade to the ageing SUV. Now the automaker has launched the 2015 Safari Storme facelift which is also a very minor update and there is hardly anything substantially different in the vehicle. But the SUV also boasts of a powerful engine, road presence and good off-road capabilities. So, let us have a look at the latest Safari and see whether it still raises a storm or not.

Motor Quest: When the first ever Safari was launched in India, it created a cult segment and off-road enthusiasts instantly connected to the SUV. The vehicle also won the Motor Forum’s Car Of The Year award in 2007 in the SUV category, beating international rivals like the Honda CR-V, Toyota RAV4 and Land Rover Freelander. 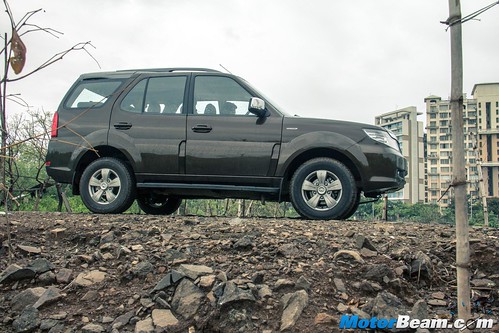 Exteriors – The Safari Storme has always been a good-looking SUV and the 2015 model is very, very similar to the previous model. The SUV still instills a lot of road presence thanks to its humungous size. It also has a very rugged feeling to it, meaning the SUV fills you with confidence that you could just take it anywhere. The vehicle is no longer offered in the dark red shade now as it wasn’t in demand. While Safari fans will definitely like the design, others have started to find the vehicle a bit dated now. 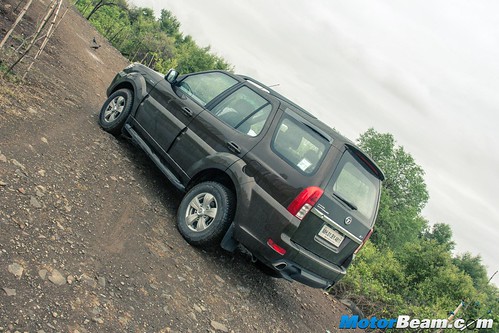 The 2015 Tata Safari Storme comes with a new grille (inspired from Land Rover) that has STORME embossed on it. The front bumper also sees a minor tweak in design. The side profile is exactly the same as the outgoing model. Tata Motors has also carried over the alloy wheels from the older model. The rear now gets a mildly redesigned tail gate with a chrome garnish having TATA engraved on it. As you can see, changes are very minuscule and we feel that the company could have taken a bit more effort in freshening up the Storme. The road presence is brilliant and people get intimidated by the size of the car and never did we face any rickshaws or bikes trying to cut across us. 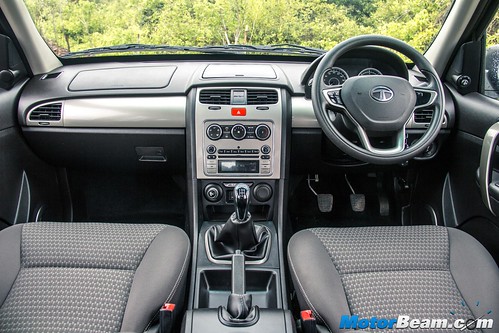 Interiors – The interior layout of the 2015 Storme is again very similar to the previous model. The interiors now come finished in a shade of black along with Java Black upholstery, dropping the airy looking beige of the previous model. The centre console gets a silver finish and the Harman infotainment system has been added with a LCD screen. The infotainment system also comes with features like Bluetooth audio streaming (finally), AUX, USB and iPod connectivity. A new reverse parking system has been added to the SUV and it makes use of the same LCD screen as the audio system (earlier it was in the rearview mirrors). The Storme also gets a new steering wheel which is similar to the Zest and it is a multi-function unit. The vehicle gets a new flip-key and electrically folding outside rearview mirrors. 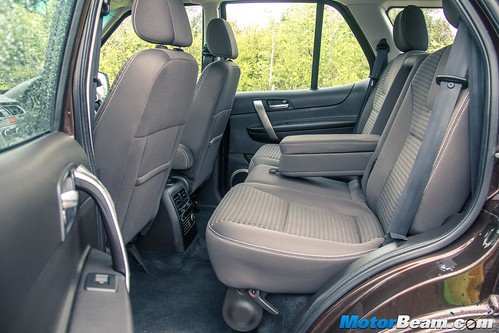 Acres of space inside the cabin even for really tall passengers

The Safari just screams ‘HUGE’. It is big on the outside as well inside

The cabin is very spacious and roomy and there is oodles of space everywhere. The front and middle rows get lots of legroom while the third row is pretty much cramped for full-sized adults. However, you can just fold the third row seats up and free up lots of cargo space. Tata should have offered front facing seats in the third row to make this car a proper 7-seater. The number of storage bins inside the cabin are in abundance. The driver gets good visibility all around thanks to the large glass area. The AC performs nicely but rear passengers take a little bit more time to be cooled. Overall, the performance isn’t bad but the fan speed feels a bit low. The audio system is decent. Regular users won’t have anything to complain about, but if you’re an audiophile then you will be asking for more. The new reverse parking system works well, but Tata could have installed a better screen, considering the fact that we are in 2015 now. 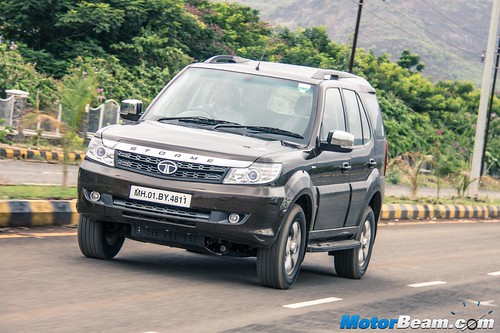 Turbo lag is quite contained in the Tata Safari Storme

Performance – The Safari Storme is powered by a 2.2-litre VARICOR diesel engine that now churns out 150 PS of power at 4000 RPM and 320 Nm of torque between 1700-2700 RPM. The engine is mated to the same 5-speed manual transmission but the SUV now gets a 260 mm self-adjusting clutch which is much lighter than the previous model. The steering also feels lighter than before. Torque delivery at low RPMs is good and the Safari offers good drivability. The vehicle moves along smoothly in low and mid RPMs and and the turbo kicks in at a notch below 2000 RPM. The vehicle cruises at 2100 RPM in 5th gear at 100 km/hr. The engine has enough grunt to reach speeds well above the ton, the additional 10 PS being felt. 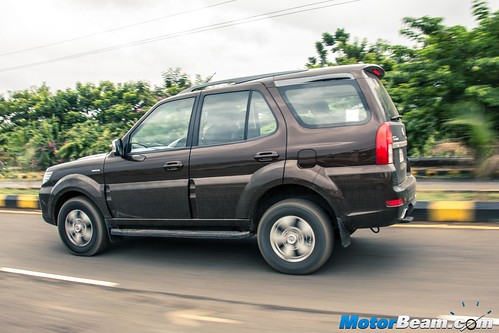 0-100 km/hr on the Safari 4×2 takes 14.11 seconds as per our VBOX tests (4×4 does it in 14.39 seconds) which is quite quick for a car of this size. The Safari Storme gets an electronic shift-on-fly feature that can engage the 4WD mode on the move. The vehicle also gets an LSD (Limited Slip Differential) and along with the huge ground clearance of 200 mm, the Storme needn’t worry about scraping road surfaces. The SUV comes in four variants – EX, LX, VX and VX 4×4. The non-4×4 variants get a rear wheel drive layout. Talking about mileage, we got figures of 12-12.5 km/l with relaxed driving manners while with aggressive driving, we extracted about 10 km/l, which is still good for an SUV of this size. 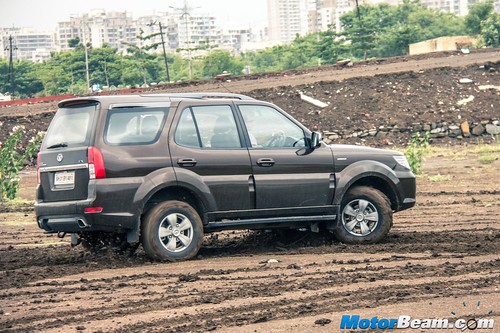 Tata has done a good job by increasing the fuel tank capacity. The SUV can now easily go on for at least 600 kms on a full tank of diesel as the tank has grown in size by 8-litres to 63-litres. Talking about the gearbox, the shifts are notchy and not at all slick. Also, the gear throws are very, very long and cause some discomfort in traffic, where frequent gearshifts are required. The long throws are one of the main reasons why the Safari feels a bit tiring to drive in city traffic. But the gearbox feels smoother than the previous version and doesn’t have issues getting into second gear like the old model. Looking at the demand that automatic gearboxes command these days, Tata Motors could have introduced an AT with this facelift itself, rather than waiting till 2016. 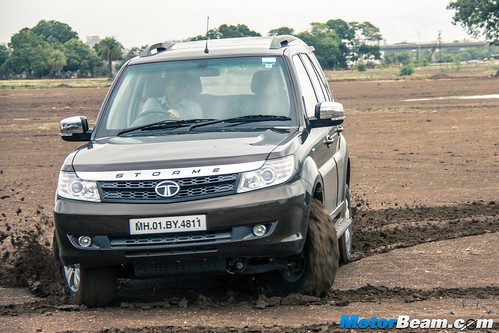 Driving Dynamics – The Safari Storme has a very rigid chassis and feels slightly stiffer than before. The turning radius is 5.4-metres. Since the vehicle is quite large in size, manoeuvring it on crowded roads isn’t as easy and you do need to be careful at times. However, the SUV boasts of immensely good ride quality which left a lasting impression. The Safari also handles pretty well and gives confidence while taking corners, although not as much as a sedan of course. Body roll can surely be felt thanks to the height of the car. Even while hitting bad patches of roads at high speeds, the SUV doesn’t feel unsettled at all. 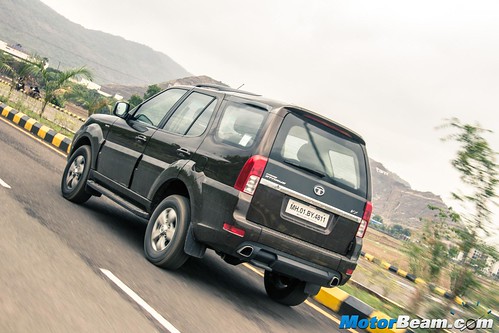 The Safari Storme is made for mile-munching, can gobble up distances

ABS and EBD is offered as a standard feature on the EX and VX variants, while the older Safari used to get these features in the base LX version also. Braking performance is good and the four disc brakes instil confidence. However, the brake pedal completely lacks feel. The Safari is made for our highways and it easily cruises long distances without any fuss and it remains very nicely composed throughout. The ergonomics are nicely sorted and all controls fall within easy reach of the hand. With audio controls now shifted on the steering wheel, the right stalk feels empty with no buttons on it. 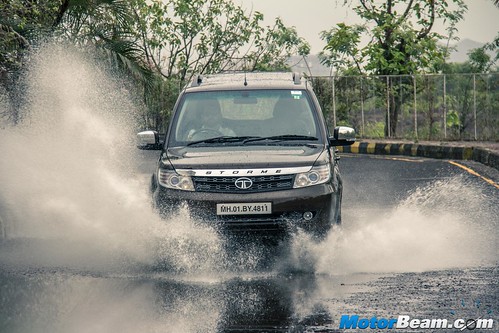 Safety and After Sales Service – The Tata Safari Storme comes with dual front airbags in the topmost VX variant while ABS and EBD are offered in both the EX and VX variants. The automaker should have provided at least ESP in this SUV considering its price, but maybe that’s reserved for the next update. The build quality, however, is seemingly good and reassuring and the fit-finish has definitely improved. Tata Motors is trying hard to improve its service with the HORIZONEXT programme but we think that the company still has a long way to go. The manufacturer has a widespread service network across the country but it really lacks when it comes to quality service, something that would keep customers happy. 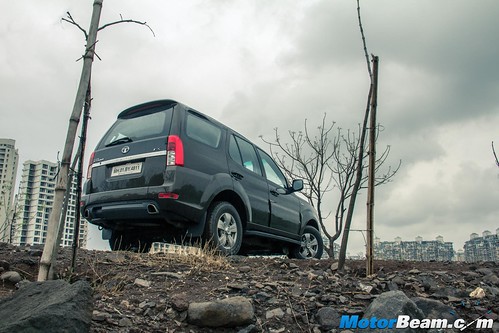 Buy the Safari Storme if you want an unadulterated SUV feel

Verdict – The Safari Storme makes a really good case for itself. The SUV excels when it comes to performance, space, comfort and road presence. It lacks some features but it offers a true driving feel, something that immediately connects your heart with the vehicle. The feel of driving a rugged car, the feel of knowing that you can take the Storme anywhere, this is offered in an unparalleled way. The vehicle has huge potential and we think Tata Motors should get serious about the Safari and put in more efforts in it. The Tata Safari needs to be modernised even more, it needs more features and even better quality and it will surely garner much more sales.

The Tata Safari Storme is a vehicle which could do with a more comprehensive update. Our 2014 long-termer was something that we adored to bits and after driving this model, all those memories just came back again. This is one of those vehicles which you don’t feel like letting go of. 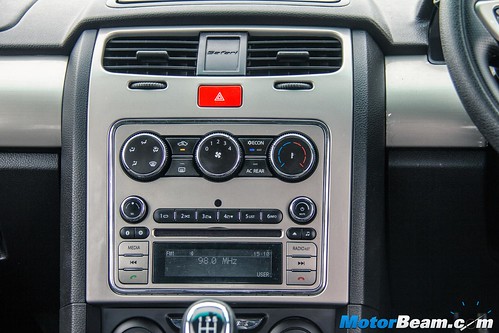 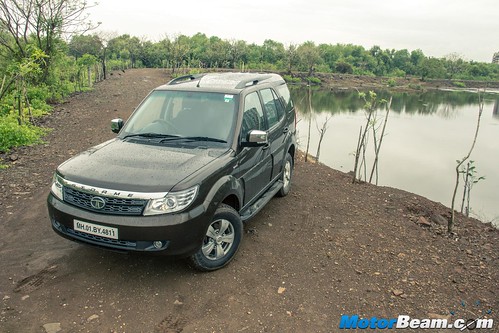 “You won’t find a bigger Safari fan than me and that is why I am the most disappointed by the lack of significant updates to the Storme. The new model definitely feels better put-together and also drives smoother, the changes being quite positive. However, considering what Mahindra has done to the Scorpio, the updates to the Safari feel lacklustre and not enough to change the fate of this fabulous vehicle.” – Faisal Khan, Editor, MotorBeam.
“The Safari has been a cult SUV for many and the facelift carried a lot of expectations. I was expecting a lot more in this facelift like push button start, touchscreen audio, etc. but was disappointed by the lack of it. Nevertheless, the new subtle and small changes do add some freshness to the package. A few more features would have greatly enhanced the appeal of this SUV, which truly deserves to sell in larger numbers.” – Javeid Khan, Deputy Editor, MotorBeam. 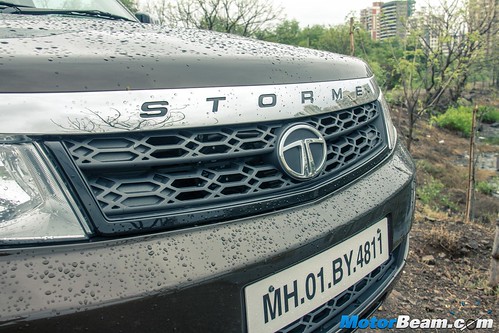 Sheer driving-feel is what the Safari Storme offers in abundance