The Polo GT TDI is the most fun you can have in a diesel hatchback, it’s just awesome

Volkswagen is the only company quenching the thirst of hatchback enthusiasts in India and their launch of the Polo GTs last year was received with a positive response. Earlier this year the company updated the Polo with a minor facelift and the GTs too have got the changes. The bigger change to the GT TDI is the new 1.5-litre oil burner which it also shares with the regular diesel Polo as well as its sedan sibling and distant cousin from the Czech republic. One of our favourite cars at MotorBeam which we had for a long term and just couldn’t let go, the Polo GT TDI is fast, frugal and fun but do the changes boost its appeal even further? 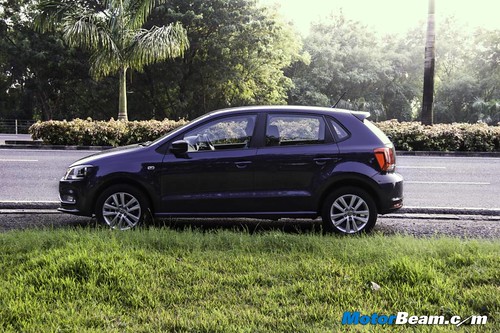 The Polo GT TDI gets blackened rearview mirrors; alloy wheels are carried over

Exteriors – The Polo GT TDI looks largely the same as before but gets the new design elements from the facelifted model which includes a new front grille with the black treatment (the GT badge is placed on the left now, earlier it was on the right), chrome strip running across the front bumper, revisions to the headlights, new license plate holder at the rear and new reflectors. The changes which differentiate the GT TDI from the regular Polo are the black rearview mirrors and a rear spoiler. The alloy wheels are the same as before although the regular Polo got a new design for the wheels, we still like the ones on the GT more. So not much visually different on the outside. 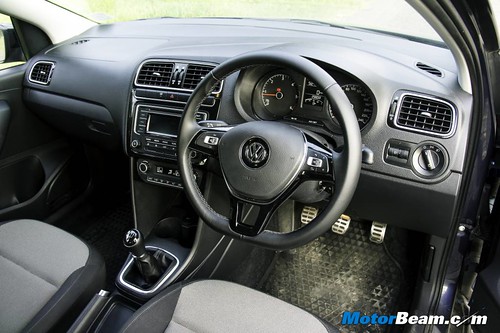 Interiors – On the inside too, things are quite the same. Just like the updated Polo, the new GT TDI also gets updated fonts for the multi-information display on the instrument cluster. The car also gets a fantastic 3-spoke flat bottom steering wheel which has more ergonomic placement of buttons for toggling through the MID. Rest of the car remains the same so you do get aluminium pedals and GT door sills. The big change though are the all black interiors (no silver on the centre console, instead it uses piano black which is also seen on the new steering). While the old Polo GT TDI (and the regular Polo on sale today) use a dual-tone interior theme of beige and black, the new GT uses an all black interior which looks very sporty and fits well with the go-fast theme. The cabin is a nice place to be in, the quality is good, there are a ton of features too but space at the rear is the only drawback of the car. Front passengers have ample room and the boot is very accommodating. 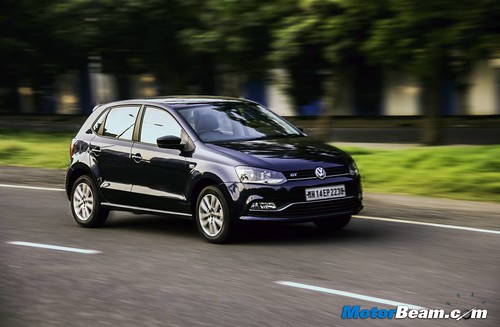 Performance – While the Polo GT TSI has retained its heart, the Polo GT TDI has ditched the large 1.6-litre TDI unit in favour of a smaller yet made for India oil burner. The 1.5-litre mill might be downsized but produces exactly the same output as its fore-bearer, thus output is 105 PS of power at 4400 RPM and 250 Nm of torque between 1500-2500. The 1498cc engine in the lower state of tune powers the regular Polo and generates 90 PS and 230 Nm, both the Polo 90 PS and Polo GT feel very similar as far as engine character goes. Just like the regular Polo, the GT TDI too has a good low-end punch with a strong mid-range and not so much punch at the top-end. 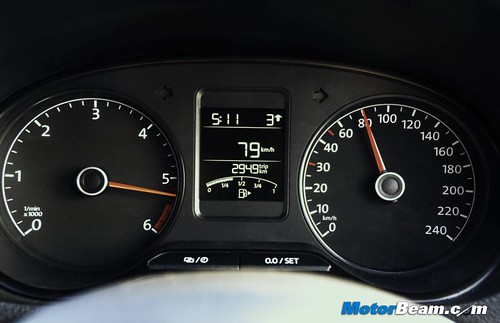 The new diesel engine in the Polo GT TDI hasn’t robbed any of the fun, it’s still a hoot to drive

When compared to the regular Polo, the GT TDI doesn’t have as good low-end drivability although the car is still fabulous when you want to amble around town. Case in point being the fact that one can put the Polo GT TDI in third gear and still crawl over speed-breakers at speeds as low as 15 km/hr, no hindrance from the powerplant whatsoever. When compared to the old Polo 1.6 TDI, the new car has a slightly lighter clutch but lacks the top-end rush, it does make up by having lower turbolag and better drivability and lower NVH, the motor is still vocal when you give it the beans (especially post 3500 RPM). In terms of mileage, the new GT is more frugal with a ARAI certified mileage of 19.91 km/l against the old GT’s 19.78 km/l. On our test, our right foot was heavily buried to the floor and we still managed to get double digit mileage numbers. In terms of outright acceleration, the new GT TDI is slower by 0.15 seconds to the ton (taking 10.03 seconds) which isn’t much of a difference, the regular 90 PS Polo is 2.31 seconds slower to 100 km/hr in comparison. 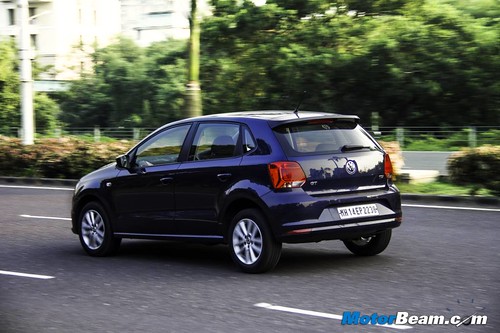 This engine in the Polo helps it become a small rocket of sorts, it’s faaaast

So the new Polo GT TDI is more drivable, it has a very strong mid-range and the surge can keep you grinning for hours. It is vocal but in a good way and the motor redlines at 5500 RPM (the redline reducing in each gear like in second it redlines at 5400 RPM while in third the tacho stops dead at 5300 RPM). 100 km/hr comes up in third gear and at the same speed in top gear, you would see the tacho tick at 2300 RPM which is the same as the regular Polo, you know why, because the gearing is identical between the 90 PS and 105 PS Polos. Thus you would do 45 km/hr, 80 km/hr, 120 km/hr in first, second and third gears respectively. It’s post that there is a difference as the higher output of the GT model gives it a better top speed. Fourth gear is good enough for 157 km/hr while fifth gear will see you top out at 195 km/hr. The gearbox is slick shifting and in-gear acceleration is very good. 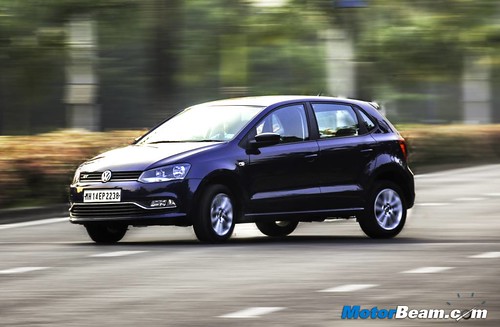 The Polo continues with the same suspension, balance between ride and handling is fab

Driving Dynamics – The Polo GT TDI shares its suspension set-up with the regular Polo and Volkswagen hasn’t made any changes for the go faster model. So you have a well set-up balance between ride and handling although the soft suspension does show a bit of bounciness when you drive really fast over very bad roads. The ride quality is excellent for the most part and so is the handling with tight body control and eagerness to dive into corners. The steering has good feedback too although it isn’t as flawless as one would expect on a car which proudly carries a GT badge on its chin. When you corner really hard, there is plenty of grip till a point understeer kicks in to ruin the fun. The new Apollo Alnac tyres are better than the Aceleres which we weren’t a fan of on the old Polo. Braking performance is good while high speed stability deserves an A+, the Polo just remains glued to the road at all times. 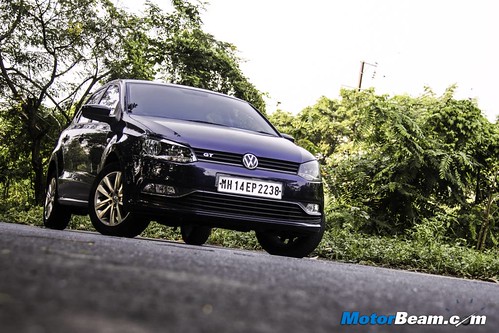 The Polo GT TDI continues to appeal to the heart like it always did, it’s a lot of fun

Verdict – The old Polo was available with a lethargic 1.2-litre 3-cylinder diesel mill which made the 1.6-litre engine equipped GT TDI the easy choice for those seeking power. Now with the regular Polo also getting a good performing engine, the GT TDI’s appeal becomes limited. The regular Polo is as much fun to drive as the GT model and the slightly higher output isn’t very apparent in day to day driving. With the price difference between the 90 PS Polo Highline and Polo GT TDI being a shade under Rs. 75,000/-, the extra amount you pay not only gives you the bragging rights of driving the most powerful made in India diesel hatchback but also ensures that even more expensive diesel sedans can’t match you when it comes to performance and that’s certainly a nice feeling to have.

Just like the old Polo GT TDI, the new one is also a rocket but a one which is fresher in appearance both inside out while being almost as quick and fun to keep a wide smile planted across your face at all times. 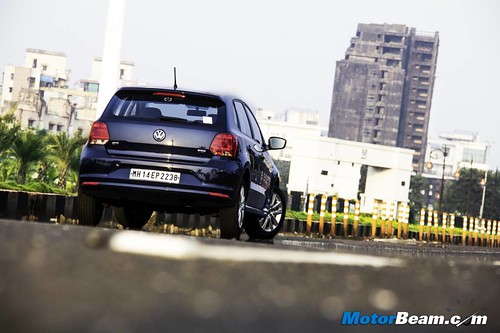 * Performance, the way it gathers pace
* Balance in handling and ride
* Build quality and feel

* DSG automatic gearbox available but not offered yet
* After sales service