The Volkswagen Polo GT TSI is fast yet convenient, it is a very tech laden hatchback

Without doubt, the Volkswagen Polo GT TSI is the best automatic hatchback in our country today. The Polo with the fantastic TSI engine is such a hoot to drive that any petrol-head would want to get one. The car stirred up quite a lot of excitement when it was launched last year and now Volkswagen has given it a minor facelift, in-line with what the other Polo models have received in India. Unlike the diesel powered Polos, the petrol powered GT TSI doesn’t get any mechanical changes and the hot hatch soldiers on with the same powertrain which is as impressive as ever. 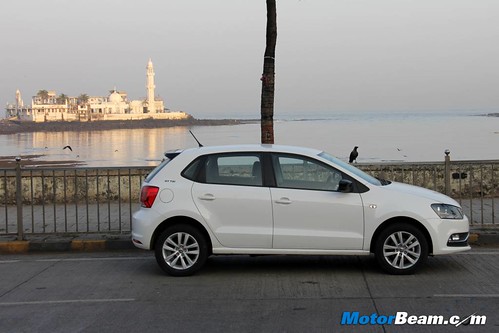 The Polo GT TSI looks largely the same as before, the design is still attractive

Exteriors – The Polo GT TSI looks almost identical to the Polo GT TDI. The only difference is the TSI badge on the boot and GT TSI stickers on the C-pillars. The alloy wheels differentiate the GT models from the regular Polo and the performance oriented variants also get black outside rearview mirrors and a black rear spoiler. There is also a GT badge on the right side of the front grille. Compared to the old GT, the new TSI looks fresher thanks to the revised front-end with the addition of chrome elements. This car simply doesn’t want to age and still looks as fresh as a daisy. 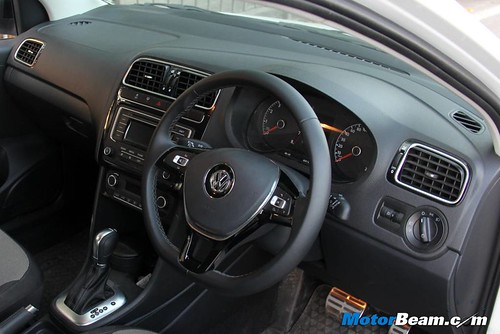 Interiors – The GT TSI shares its interiors with the GT TDI so you get an all black interior which gels well with the sporty theme. Quality is excellent and so is the overall feel inside the cabin. The piano black finish on the centre console, silver outlines around the AC vents and the 3-spoke flat bottom steering wheel are the big highlights in the cabin. The GT also gets aluminium pedals and the seats are very supportive too, so driving this car is a pleasure. In fact, other than the lack of rear seat room, there is no fault with the cabin of the Volkswagen Polo, everything is almost perfect. Small details like the one touch up/down for all power windows, large and easy to read fonts for the MID and doors which shut with a reassuring thud go a long way to make the Polo stand out from its rivals, the GT models having no direct competition anyways. 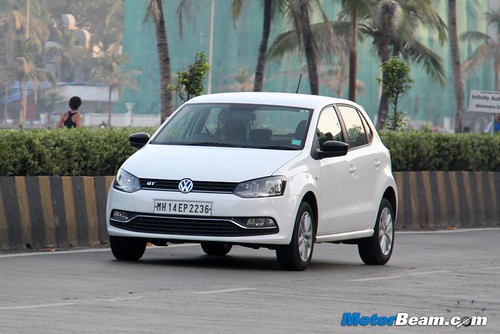 The 1.2-litre TSI mill has the power to send you in a tizzy, it’s addictive

Performance – Volkswagen is betting big on downsizing the world over and the Polo GT TSI uses one of those engines which are part of this strategy. The 1.2-litre TSI mill is insanely awesome and needs little introduction, we had a gala of a time with our long term Vento TSI. The turbocharged mill thrusts out 105 PS at 5000 RPM and 175 Nm between 1500-4100 RPM, with those kind of torque numbers, the GT TSI puts even bigger petrol engines to shame. Start the engine and you will be spellbound by the NVH or rather the lack of it. The powerplant is so refined, there is absolutely nothing to be heard. In spite of that, the motor is very quick to make progress, it has a fantastic punch in all parts of the powerband – low, mid and top although top-end rush could have been better. 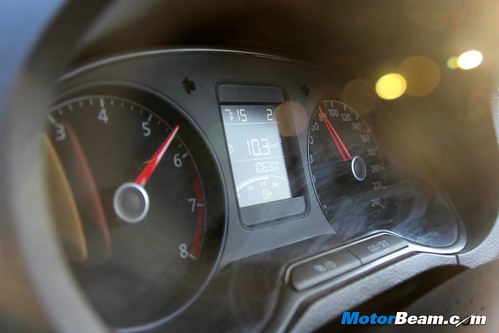 Driving the car in the city is a relaxing ordeal, the motor is quick to respond when you need it and the 7-speed DSG automatic transmission works its magic to keep the vehicle in the right cog at all times. When driven sedately, there is no hint of the forced induced beast which powers the Polo GT but give it the beans and the world transforms. The GT TSI takes off with urgency and hits triple digit speeds in a jiffy. While VW claims a 0-100 km/hr time of 9.7 seconds, the best we could record on our VBOX was 10.09 seconds, putting the GT TSI on par with the GT TDI in terms of outright acceleration. The problem with the GT is that the gearbox won’t let it rev more than 1200 RPM at standstill. Thus when you launch the car, there is some bit of lag which robs crucial milli seconds from the 0-100 km/hr time. 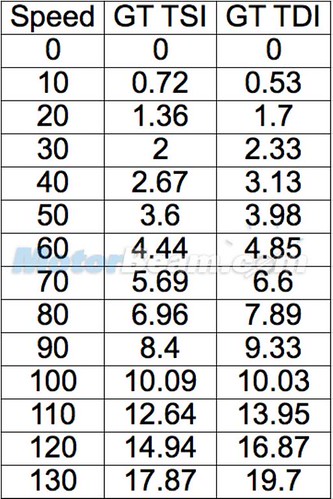 GT TSI or GT TDI, the above table shows the acceleration difference between both

As the above table shows, the GT TSI is faster at the top-end thanks to it having a good punch near the redline which comes in quite early at just under 6000 RPM. Although the tachometer shows redline at 6500 RPM, the GT seldom crosses the 6000 RPM mark with only first gear seeing the motor rev till 6200 RPM. There are three driving modes, D for drive, S for Sports and tiptronic function which let’s you shift gears on your own (there are no paddles!). In D mode the gearbox takes it easy, shifting early and as per throttle inputs, on full throttle it swaps gears at around 5500 RPM while in S mode the motor pulls to around 6000 RPM. In manual mode the gearbox remains in the lowest gear and won’t upshift till redline but if you don’t give full throttle, it won’t downshift. Gears will automatically change in manual mode if you fail to do so.

The Polo GT TSI feels good to drive both slow and fast, it gives you the best of both the worlds

The 7-speed DSG unit offers slick shifts and shows the urgency you would want from a performance car. The Turbocharged Stratified Injection is itself fast revving and becomes audible post 3000 RPM, creating an addictive note post 4500 RPM. 100 km/hr comes up in third gear and you can comfortably cruise in top gear at 100 km/hr with the tachometer ticking in at just 2100 RPM. The vehicle pulls very quickly to 140 km/hr (it does 150 km/hr in fourth gear) and post that progress is a bit tamed although given the road, the GT TSI will easily top out at 190 km/hr. When you turn on the car, the cluster reminds you to put your foot on the brake to engage gear, in spite of that one can change between N, D and tiptronic without touching the button on the lever. With our heavy foot and redlining day and night, the GT TSI returned a respectable mileage of 9 km/l. Driven sedately, this car will easily give double digit numbers. 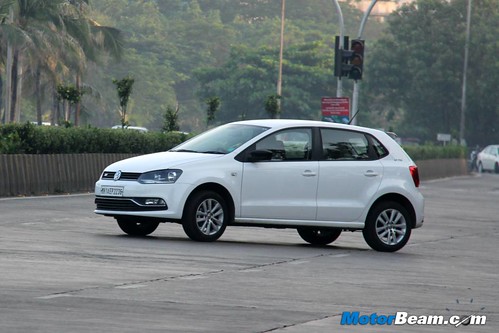 With a softer suspension, the GT TSI has a tendency to bounce at speed over bad roads

Driving Dynamics – The Volkswagen Polo GT TSI also gets ESP which prevents wheel-spin although this system isn’t really required on this car since power is fed in a smooth manner. There is also hill hold which isn’t of much use on an automatic car. The GT TSI is lighter than the GT TDI and is less stiffer too, the softness of the suspension being very noticeable when you hit a bump, the tendency to bounce a bit and leave its line is there. There is less understeer though and ride quality is excellent. The steering is quick but could do with more feedback, more so considering the GT is a performance model. Braking performance is excellent and the car stops dead in its track at any given speed (the hazards turn on when you stand on the brakes). The new Apollo Alnac tyres offer better grip and don’t lose traction as quickly as the Aceleres offered before. 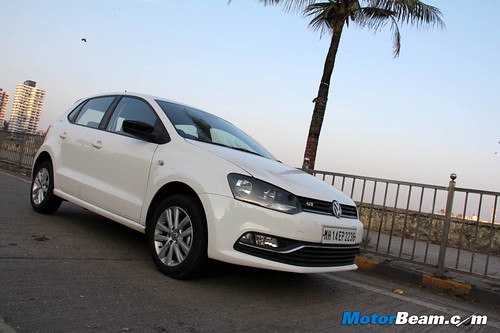 An easy car to pick, the VW Polo TSI is a breeze to drive yet it’s so much of fun

Verdict – The Volkswagen Polo GT TSI has always been a hot favourite for most of us and the updated model isn’t any different. While the cosmetic tweaks do make this vehicle more appealing, mechanically nothing has changed so the performance and dynamics continue to be the major pulling points to this vehicle. The Polo GT TSI is like Jekyll and Hyde, supremely comfortably to drive in the city, offering the convenience of an automatic and the pace to close gaps quickly while out on open roads, it simply transforms into a beast, giving you an insane adrenaline rush. All this makes it by far the best performance hatchback to buy for those who love driving.

The Volkswagen Polo GT TSI is only for the enthusiast as the price difference between this model of the Polo and the 1.2-litre engined petrol Polo Highline is a whopping Rs. 2.22 lakhs. You do however get a fabulous engine paired to an equally awesome gearbox. 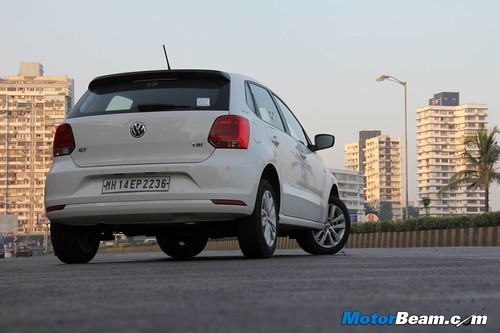