Volvo is back in the business of making new SUVs if one was wondering about the 12 years since the last generation of the XC90 was produced. Volvo is now owned by China’s Zhejiang Geely Holding Group since 2010 and the new ownership has given this ex-Ford Premium Automobiles Group (PAG) brand all the necessary support and infrastructure for it to move forward as a profitable enterprise. At the same time, Volvo also has strong aspirations and in the interim period right up to the launch of the Gen II XC90, has been communicating several things. Among the key messages was how it was moving towards a truly unique design language and is reinforcing the strong identity. The first generation was built on Volvo’s fixed wheelbase P2 platform, and the incoming XC90 is built on Volvo’s latest scalable architecture platform which allows engineers flexibility to design various models/variants. The incoming car is longer, taller and lower than the model it replaces. 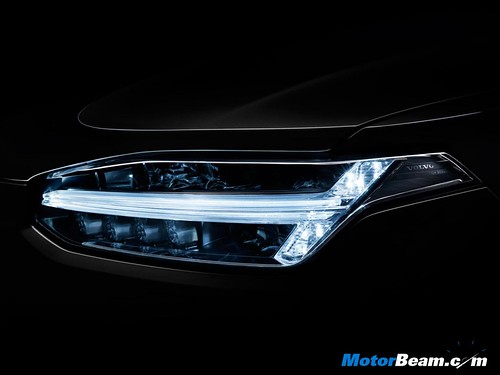 At first glance, the exteriors of the new 2015 XC90 visually connects with the outgoing SUV, but its design execution is crisper and more fluid than its predecessor. It is also the first family member with a distinctive new Volvo face which now comes with signature diagonal slash across its grille and squinty headlamps bisected by T-shaped LED daytime running lamps. Although, conservative by segment standards, its design effectively disguises the seven-seat vehicle’s mass when you consider the profile, proportions and stance in particular. Even with its looks alone, it conveys that it wants to take head on rivals from German/Japanese premium brands. Build quality is impeccable and even the near production cars that we tested were almost fault free. 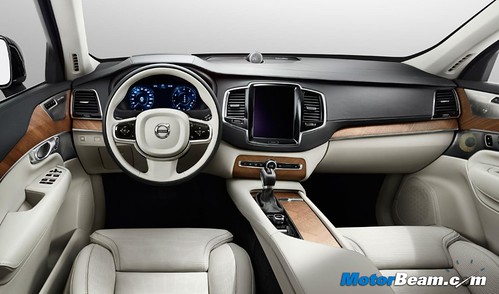 The XC90 features all new interiors, buttons are at a minimum on the dashboard

If Volvo has aspirations to move the brand up in the class, then one of the things that matters most is how the interiors have been presented and what do they convey. The results of the investment are more than indicative and suggest a deep and thoughtful process has been proposed. In fact, the investment has begun with the appointment of Robin Page in 2013. In fact, Volvo pulled off a major coup by hiring the man responsible for designing the interiors of uber luxury cars like the Bentley Continental and Mulsanne. The Page influence is evident at every nook and corner in the car’s cabin. What distinguishes the XC90 from its German or Japanese competitors are elements in the cabin which comes with leather bound superbly comfortable seats, stitched leather, textured metal, and veneer wood finishes with Scandinavian touch. The Mitsubishi-supplied touch screen responds quickly to tablet-style commands—not only tap but also swipe, pinch and even stretch. We found it quite intuitive compared versus the soon-to-be-outdated systems based on knobs and cursors. 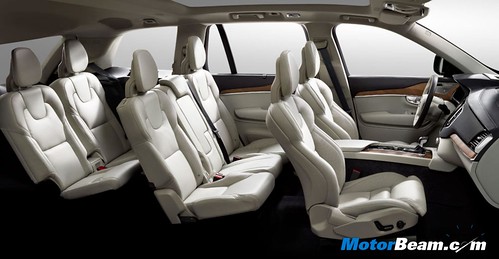 A plush cabin with high levels of comfort, Volvo has done a fantastic job

In terms of accommodation, depending on the market, it will be sold as a five or seven seater. In general, the ergonomics are spot on irrespective of the trim level. Driver gets a good driving position and hugely adjustable seat and steering wheel. Like a family MPV, there’s ample room in the second row with split-fold seats (40/20/40) which also slide allowing comfortable access to the third row. The third row seats, unlike many vehicles who design them for young children, is the same-size seats as those in the second row. Head and leg room in all rows are both fine for adults. With all seats up, there’s small cargo space available. The car offers cargo space of 368-litres with all three rows in place, 1019-litres with the third row stowed and 1900-litres with the second and third row folded flat. 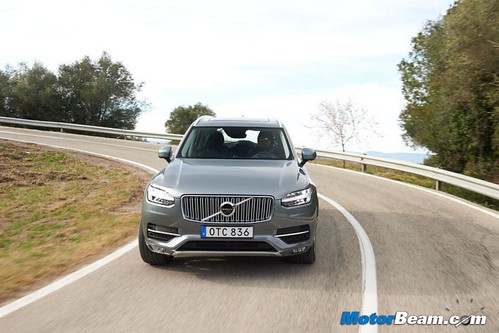 The powertrain of this car is the first example of how Volvo plans to move forward not only with the XC90 but the entire range of its new models which will benefit from the new strategy announced in 2011 that are to be based on a common 2.0-litre 4-cylinder engine block. These engines are forced fed and depending on model (T6 or T8 “Twin Engine” plug-in hybrid model), the application is slightly different. In the T6, the engine produces 320 HP and in the T8 where it is coupled with 80 HP electric motors, the combined output available is 400 HP. The hybrid model boasts CO2 output of just 59 g/km. Both set-ups use direct injection and interestingly a combination of supercharging and turbocharging instead of two turbochargers or just a supercharger alone and the reason for this is that the former combination has allowed Volvo engineers to virtually guarantee a refined attitude and finer control of the hardware. The engine is mated to a 8-speed automatic transmission. In the first year of launch, all XC90s are AWD models (2WD models will join later) and the 4×4 system uses an actively managed Borg Warner multi-plate clutch. 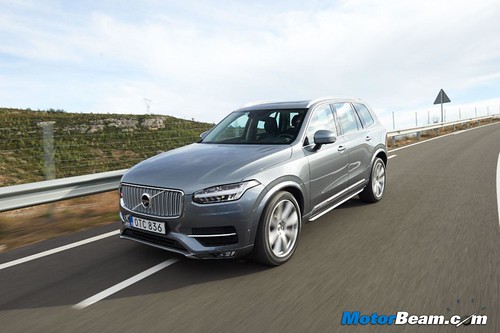 Even though 4-cylinder engines are the mainstay, performance is nothing short of excellent

The car we tested and spent most time was the T6 variant and if one visualised that a 2.0-litre 4-cylinder would be inadequate and under perform in a seven-seater SUV which weighs over 2000 kgs, then there’s a super surprise in store out here. The powertrain set-up and the way it has been calibrated for the job is nothing short of outstanding and we are sure on the merit of its class leading performance, it will win the hearts of the die-hards comfortably. The T6 petrol engine is a charming unit across the rev band, with lots of power available and virtually no turbo lag whatsoever. The exhaust note is throaty and it even blips when driving in sports mode. The car’s secondary and high speed performance was pretty impressive in terms of brisk acceleration, automatic gear shifting, gear hold complemented by a superb chassis. The steering is pleasingly smooth and linear and offers well weighted and calm performances, while straight-line stability is solid. However, we did feel at times the gearbox appeared to be a bit slow to respond to downshifts but it was quick to respond to the upshifts. The noise, vibration and harshness measures kept the cabin quiet, with most of the noise coming from the road. 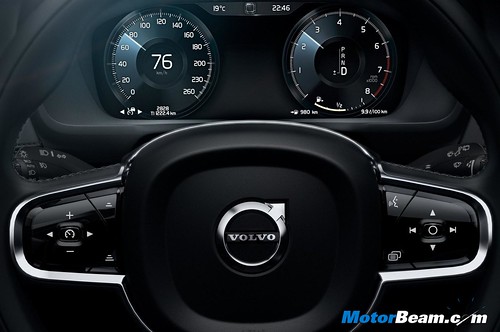 While the car’s hardware for all-wheel-drive is more road biased, it ensures the Volvo XC90 can be used on trail routines also. But, as with these kind of set-ups in the class, they are not designed to do serious off-roading because the preferred set-up would be mechanical with driver selectable terrain options, but not having it doesn’t necessarily mean it’s going to be a handicap in cars like the XC as most of competition, BMW X5, Mercedes ML, Audi Q7 among others all engage similar AWD technologies which apply electronic control software on the fly. The key reason why the drive feels so refined is that in the first generation XC90 SUV, Volvo was basically using an older design, but for the new XC90 it has ensured that none of the quirky features of its predecessors are carried forward. Hence, this car gets a properly designed independent front wishbone system, which keeps the front wheels more correctly orientated when cornering, and a five-link rear, with an unusual carbon/GRP transversely placed rear spring, which has been chosen because it’s compact and has built in anti-roll characteristics. 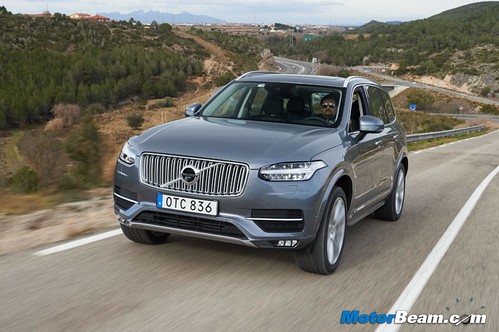 Volvo has achieved a fine balanace between ride and handling, the XC90 is responsive

Despite being a big car, the weight on the driver’s steering wheel is hardly felt. It feels light off-centre, but gets heavier upon sharper turn-in, and feels as responsive as some of its competitors, notably the X5 or X4. The turn-in is also commendable and on both accounts far superior than what one gets in truck-based SUVs. Volvo engineers told us that when developing the XC90, they looked at the Volkswagen Touareg, Porsche Cayenne and BMW X5 (all road-biased SUVs) in particular and worked out the wade depth (450 mm), ground clearance (238 mm) and approach, departure and breakover angles of 24˚, 21˚ and 23˚respectively. 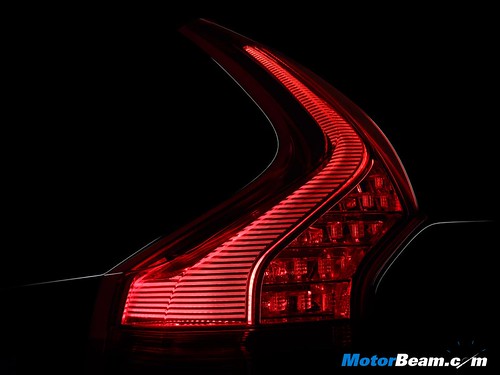 In general, the Volvo XC90 is comfortable for most occupants (third row included). Driver gets a command view but the A-pillar can appear obtrusive for some drivers and those who might worry about the blind spot arrangements will be once more assured that the safety-conscious carmaker has endowed the vehicle with the usual array and more in terms of kit and application – ranging from blind spot warning, 360-degree cameras, lane departure warning among other features. Interestingly, two new world first safety features have been included, automatic braking in intersections if a car drives into the path of travel from another angle, and Run Off Road Design, which works to keep occupants safe if the car goes off the edge of the road. That feature includes safety-belt pre-tensioning and crushable supports in the front seats to absorb crash force energies. Clearly, safety is at the forefront with every Volvo.

Volvo has entirely reinvented the XC90 SUV. It now adds a new level of quietly sophisticated design, comfort and efficiency to Volvo’s long-established values of safety. Deliveries in India will begin in the second half of the year.

* Exterior and interior styling, high attention to the minutest of details
* Performance of 4-cylinder engines which do a good job of moving this 2-tonne SUV
* Ride and handling balance, can off-road reasonably well too
* Insane amount of safety systems on board, two world firsts as well