“I have been to heaven and hell and am back to tell the story” is probably how I would describe my visit to 2016 Force Gurkha RFC India in a nutshell. But the statement makes people very curious as to why do I include heaven and hell in the same sentence. Well, since we all prefer the good things in life, let me begin with things which make me use the heaven. I attended the event from 24th July to 29th July. This meant that I missed few of the initial stages. For those unfamiliar with the event, the Indian chapter of RFC is divided into four stages – Prologue, Predator, Terminator and Twilight. 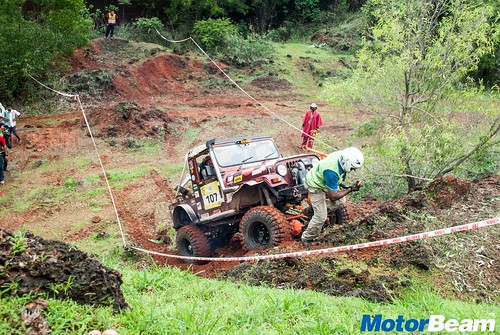 None of the stages could be called a cakewalk, not even the initial ones

Let me begin with the Prologue stages of which there are twelve. Reaching a day later at the venue meant I missed the first six stages. However, I wanted to make up for it on the next day and was at the event till all the stages were finished. For those who think that the initial stages would be relatively easier, dream on. Cougar Motorsports, the company that bought Rain Forest Challenge to India doesn’t know what easy means and all of the Special Stages were, well, special. The technicalities involved in each of the stages made them very interesting for the spectators. 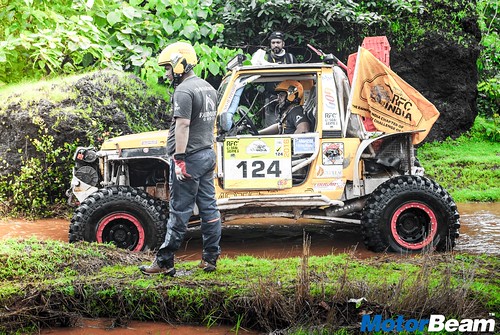 Breakdowns in between the stage meant a huge setback in points

Each Special Stage is worth hundred points and the competitor who finishes first would get full marks. The ones finishing on positions post that would get points on a reducing basis. While every team would want to maintain a lead over others since the beginning, it isn’t easy to do so. Try to go too fast in a stage and the chances of making errors and getting penalties is high. Go too slow and you end up losing points due to the reducing point system. What is needed is the perfect combination of speed and calmness to ensure that you get good points consistently in all the stages. 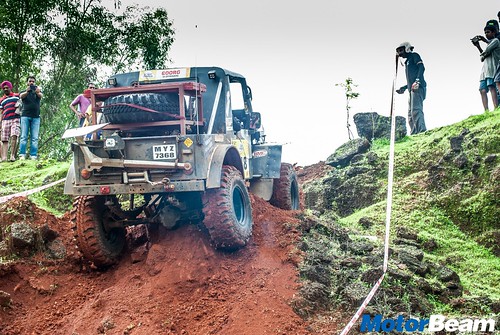 When stuck at obstacles, losing patience would often create trouble

No better example of calmness and speed than the first ever Indian winners of Rain Forest Challenge India – Gurmeet Virdi and Kirpal Singh Tung. The boys from Gerrari Offroaders were cool as cucumber throughout all the stages and showed excellent coordination. Coordination brings to an extremely important aspect of this competition. In order to perform well at the event, it was absolutely necessary for the driver and co-driver to be on the same page. The co-drivers job was physically a bit too demanding and having one who’s up to the task gave the teams an excellent advantage. 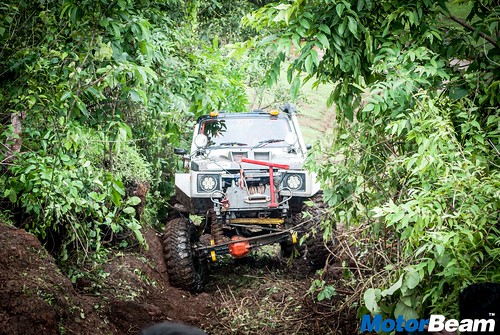 All the special stages were designed by the team of experts at Cougar Motorsports who are known to build stellar off-road tracks. What is most impressive is that there is absolutely no harm done to the environment around and the stages were built without cutting any trees. Infact, breaking a tree while rescuing the vehicle or winching meant a hefty penalty on the competitors. Also, since the Goa government supports the event, it makes it much easier for the organizers and competitors because otherwise transporting these beasts from one place to another itself can be a cumbersome task considering they aren’t road legal. 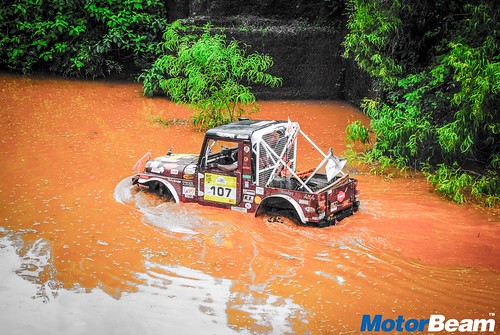 In some stages, time was a big constraint and led to DNF for many

Enough of the nitty gritties, lets get back on to how the event unfolded. Upto day three of the event, Gerrari Offroaders managed to stay ahead of the game. This was made possible by their strategy of incurring as less penalties as possible and not getting a DNF (Did Not Finish). It worked very well for them until day four. However, on day four, the steering in their developed an issue which meant they had to take a DNF in one of the special stages. This was a big blow and put them to the second position. However, they stayed positive and were determined to take the lead in the upcoming stages. 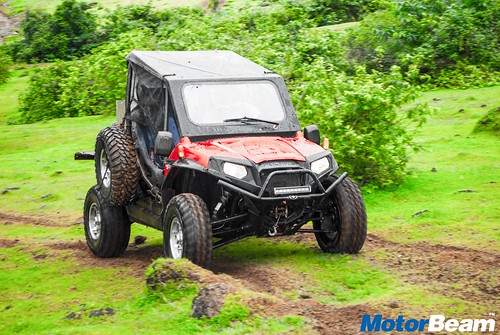 When competitors were resting, media folks drove the Polaris RZR 800

Considering how taxing the event is, the competitors had a rest day before the Twilight zone. This gave them time to relax, look upon the mistakes and decide the strategy going forward. The service team also got a chance to make repairs to the vehicles if needed. Speaking of service team, it is a very critical part of RFC because of the abuse the vehicles go through. Fixing issues in the least time possible is absolutely critical in order to finish all the stages of the day. The media folks also got to drive on this day and this was something which I was really looking forward too. We drove the Polaris RZR 800 over two stages and what an experience it was! 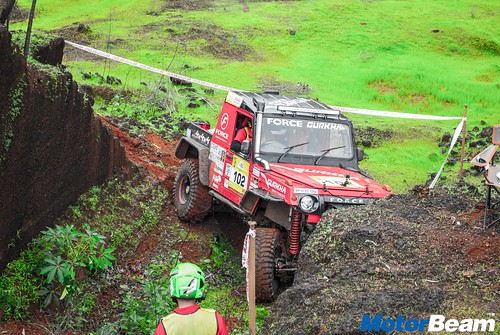 The Twilight Trail is something which is both scary and exciting

The highlight of RFC India has always been the Twilight zone and this time too it was no different. The Twilight zone is divided into two parts over a period of two days. On the first day, the competitors had to go through a seven kilometer long trail made within the forest. To do the same, they had a time of ten hours. While seven kilometers in ten hours sounds easy, it isn’t the case. The vehicles which went in first had a slight advantage since the trail wasn’t too mucky by then. But once a few monsters with grass shredding mud-terrain tyres crossed it, the going got tough. Rains added to the plight of the competitors too. 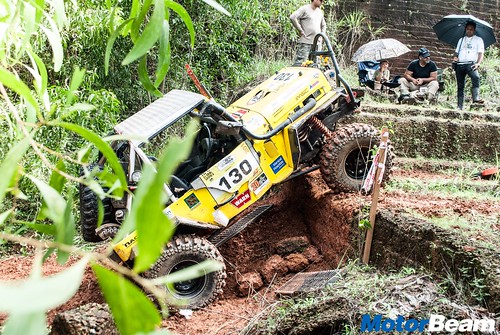 The natural path within the forest posed great challenges

While a few cars managed to cross the Twilight trail in a little under four hours, some took the full ten hours to get out of it. However, not all could get out and two cars got stuck inside out of the twenty one that went inside. Those two were recovered in the morning as recovering a vehicle in a jungle at night isn’t an easy task. The ones who managed to complete the trail got full hundred points. There were a few teams which used external help to get through the trail and were given a hefty seventy point penalty. Even after that, there was good entertainment when the final results were being compiled, more on that later. 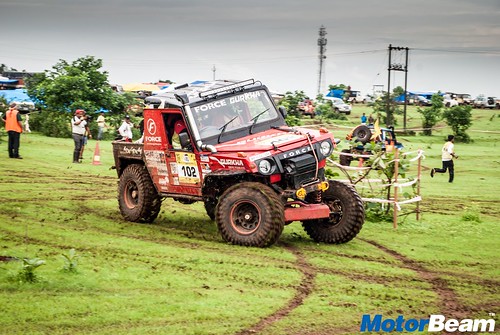 At the end of the Twilight trail, Gurmeet and Kirpal were lagging behind by forty one points. With just two stages left in the event, chances of them covering up and winning seemed slim. But, surprise surprise! When I reached the venue for the final two stages, I saw that these stages were more about speed and agility of the vehicles. Considering the Force Gurkhas built for RFC are too bulky and not particularly agile, this was set to an interesting day. As expected, the Force Gurkhas weren’t able to perform too well in these two stages while Gerrari’s Gypsy performed exceptionally well. 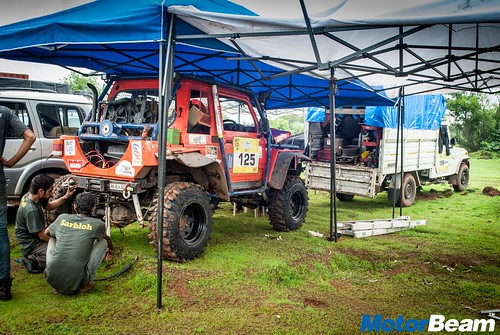 The fact that the rest of the competitors also managed to post good times in these two stages made everyone eagerly await the timings and final results. While word was that the boys from Chandigarh had won, official word was awaited as all competitors are given a chance to raise a dispute if they feel something was amiss. Force Motors ended up raising a dispute as to why the competitors who used external help on the previous day were allowed to participate the next day. After a lot of deliberation and discussion, they ended up withdrawing the dispute keeping sportsman spirit in mind. 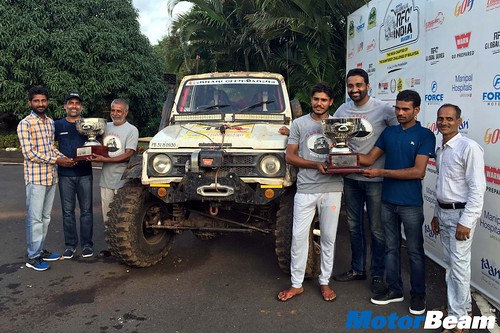 With all the confusion sorted, the official result was announced and history was made. An Indian team won the RFC India. The atmosphere around was extremely cheerful with everyone having a huge smile plastered on their faces and this included other competitors too. Well, you must be wondering where is the “hell” I mentioned in the beginning of my post. While the event is a lot of fun, it is extremely tiring for a person covering it. Waking up early and travelling to the location, hiking up and down to witness different stages, travelling back in the evening and repeating it every day does get very taxing. But, all is forgotten when you see the teams compete.