A few years ago Honda decided to restructure their product portfolio to reach a larger number of customers. The focus changed from premium offerings like the Civic and Accord to smaller cars like the Brio and Amaze. This was a smart move since the volumes lie in the smaller car segment when it comes to India. The Brio, by itself, may not have done too well for the Japanese manufacturer but more than half of Hondas products are based on the same platform. (Amaze, Mobilio and the upcoming Honda BR-V). Indian regulations of excise benefits to sub 4-metre cars and the love for 3 box design has made compact sedans very popular and Honda entered this challenging segment with the launch of the Amaze in 2013.

Motor Quest: The Amaze is a very important product for Honda as it is their highest selling model after the erstwhile City. Honda had updated the Amaze with an AVN last year and this is the first major update to the Amaze since its launch. Competition in the compact sedan space is fierce and newer products like the Figo Aspire are fighting for the same piece of cake. Keeping this in mind, this update to the Amaze couldn’t have come at a better time. 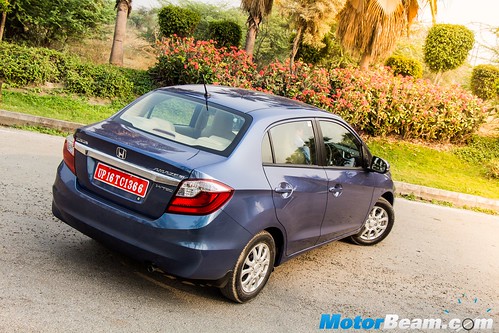 The sharp new styling elements add freshness to the appearance

The exteriors are more or less the same barring few aesthetic upgrades. Dimensionally speaking, the Amaze sits comfortably under 4-metres with a proportional profile. The front gets a new dual-chrome grille which takes heavy inspiration from the upcoming Honda BR-V. The front bumper now gives a wider perspective to the car and the fog lamps now have a sportier housing making the front look quite aggressive. At the rear, Honda has brought in new clear type combination tail lamps and a revised bumper design. It’s the front profile though, which makes the Amaze looks quite fresh. Honda has also introduced a new blue paint for the Amaze. 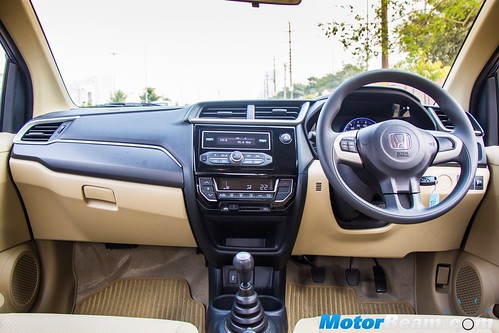 The biggest change comes in the interior department. Honda has done away with the Brio dashboard which was looking pretty aged by now. Replacing it is an all-new dual-tone dashboard which is similar to the City and Jazz. The new dash also gets silver accents and piano black finish in the centre. The new dashboard layout not only looks more premium but adds an integrated audio unit which supports Bluetooth phone connectivity and audio streaming. Replacing the manual AC is an automatic climate control which gels well in the central housing. Interior quality, fit and finish feels better all around. There are a few practical touches like a recess under the air-conditioner to keep odds and ends. Complementing the new dashboard is Honda’s 3D speedometer with multi-information display. 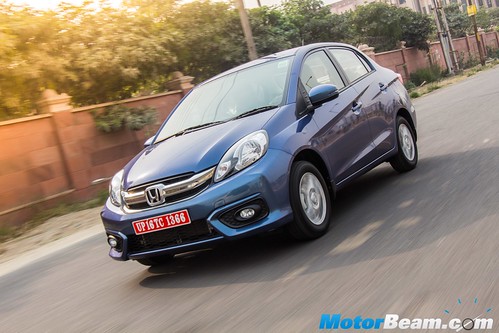 Powering the updated Amaze are the same set of engines as before. The diesel is powered by the 4-cylinder, 1.5-litre i-DTEC which produces 100 PS of power at 3600 RPM and 200 Nm torque at 1750 RPM. This motor fares quite well in terms of performance and fuel efficiency but was known to be noisy when compared to the competition. Honda claims they have improved upon the NVH levels with better insulation. This oil burner performs very well in the low and mid range of the rev band which makes it quite practical in most driving situations. Power fades off as you go to the higher end of the rev band. This engine comes mated to a 5-speed manual transmission which offers decent shifts but isn’t the smoothest shifting box in the segment. 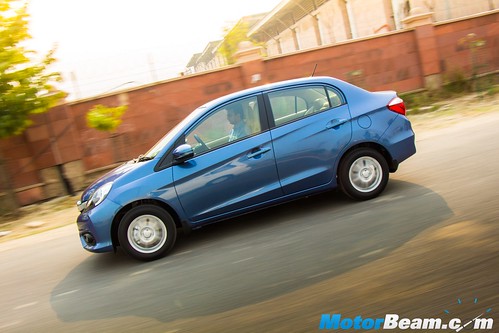 The 1.2 petrol is silky smooth and revs freely

Under the hood of the petrol version is a 1.2-litre, i-VTEC engine producing 88 PS at 6000 RPM and 109 Nm at 4500 RPM. This comes mated to a 5-speed manual gearbox. Honda is known for gasoline powertrains and this i-VTEC is quite rev happy and performs very well in the mid and high end of the rev meter. Low end grunt is average as with most petrol engines. This engine loves to be revved and pulls quite cleanly once you give it the beans. 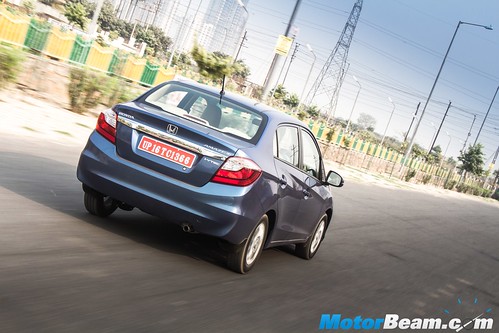 The new CVT transmission is convenient for city usage but noisy

Previously Honda was offering the Amaze with a 5-speed automatic transmission but the Japanese manufacturer has done away with this and has now slotted in a CVT transmission. This makes more sense as the CVT has infinite number of gear ratios making it more practical in most driving situations. We had a short spin in the CVT variant and it was quite easy navigating through peak hour Delhi traffic. However, it gets too noisy as you go higher up the rev band and progress isn’t brisk as you would get in a manual. The CVT version is more fuel efficient than its manual counterpart and produces 90 PS at 6000 RPM and 110 Nm torque at 4800 RPM. 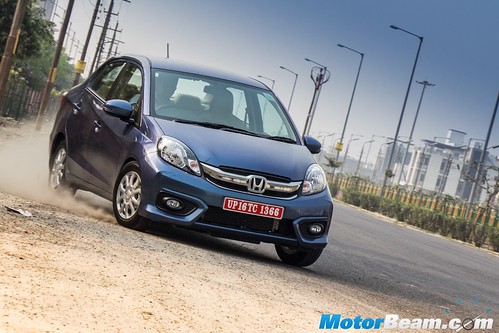 There are no mechanical changes done to the Amaze facelift and hence the driving dynamics remain exactly the same. This means that the ride quality is comfortable and flat as the speed rises while the handling is brisk and quite enjoyable on a set of corners. The steering wheel offers decent feedback, it’s light and easy to operate at low speeds and weighs up nicely as the speed increases. Overall a very well balanced chassis for the Indian road conditions. The brakes are strong as well offering effective stopping power with reassuring pedal bite. 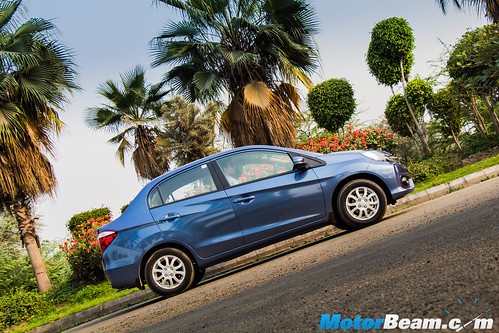 The slight changes to bumpers makes it look leaner and fresh

With the launch of new rivals in the compact sedan segment, the Honda Amaze started looking old amongst the fresher lot that come with new styling and latest equipment. However, getting some drastic changes inside out, the Honda Amaze facelift now offers a much more appealing package that can fend off some of its competitors. The heavily revised interiors are a fresh breath of air but the only chink in its armour is the lack of rear parking sensors that are only available as an accessory. The updated front and rear profile get sleek design elements that give it a broader stance and makes the Amaze’s presence felt on the road. Honda has marginally increased the price but it’s worth the extra penny spent.

The Honda Amaze had a great beginning for itself in the compact sedan space having a frugal diesel engine and well balanced compact styling. Maruti Suzuki had updated the DZire and recently Ford launched the Figo Aspire, which made some buyers overlook the Amaze. Now the Amaze is back with a bang and comes with some desirable changes that makes a strong point for itself in the competitive compact sedan segment. 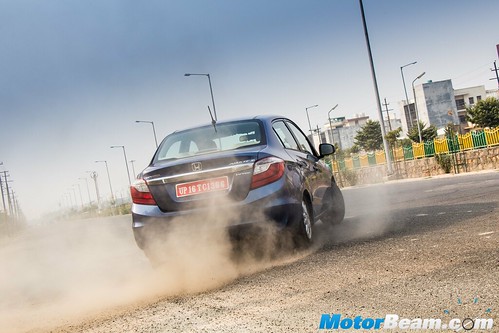 The Amaze offers a good mix of practicality and fun

* Rear parking sensors not offered as standard, it is an optional accessory 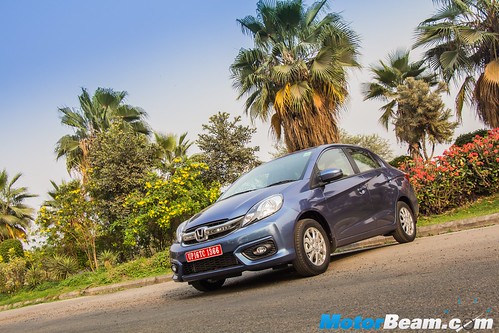 “The Amaze has always impressed me with its sedan like proportions and abundance of cabin space. The only spoiler for me was the dashboard which looked too plain and dated compared to the competition. Honda seemed to have heard us on that and the new dashboard design makes it look quite upmarket. The subtle improvements in fit and finish are also a positive in the updated car. Overall, it is the right step forward by Honda to ensure that one of their highest selling cars continues to attract customers.” – Javeid Khan, Deputy Editor, MotorBeam.
“I’m not a big fan of the compact sedan segment because of the abrupt tail section of most of these cars. However, I’ve always appreciated the well proportioned design of the Honda Amaze. Still, it felt incomplete from the inside having limited feature list and basic appearance. Honda has now addressed all the shortcomings of the Amaze and I was quite satisfied with the sharp new styling changes and a complete looking cabin having sufficient features on offer.” – Aariz Rizvi, Assistant Editor, MotorBeam.