The Honda BR-V’s USP is space, it offers a segment unique 7-seats and is powered by frugal engines

The compact SUV segment is the talk of the town in the Indian automobile market. Renault was the first to dominate this space with the Duster which was unchallenged for a long time. Nissan soon launched the Terrano and we did see some sibling rivalry between the cousins. Hyundai came out with the Creta only this year and this Korean SUV is currently topping the charts in terms of sales volumes. To directly compete with these, Honda will be launching the BR-V next fiscal year. The Japanese car maker isn’t calling the BR-V an SUV, instead it addresses the vehicle as a crossover. However, the BR-V is best classified as a compact SUV. We get a sneak peak of this new Honda at the company’s test track in Motegi, Japan. 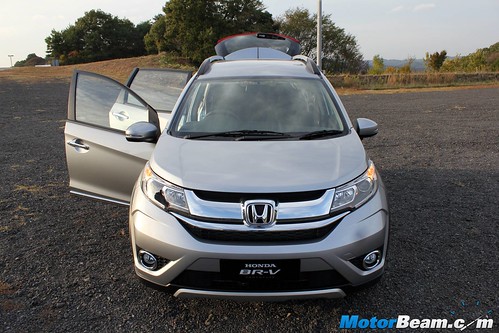 The BR-V (Bold Runabout Vehicle) is based on the Brio platform which was developed for emerging markets like India. Of the cars sold in India, the Brio, Amaze and Mobilio are all based on the same platform. The BR-V will be sold as a 7-seater (the competition only offers a 5-seater option). All the SUV elements are neatly integrated in the BR-V. The muscular wheel arches, roof rails, high ground clearance and the butch looking front add a lot of character when it comes to design. Honda has used chrome in abundance and it looks good in flesh and at no point feels overdone. 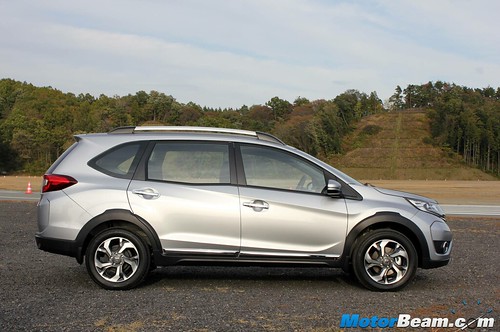 The front fascia is highlighted by the bold chrome grill on which the Honda logo sits. A black cladding runs around the car with faux skid plates, truly enhancing the SUV character. The side profile is reminiscent of the Mobilio with similar character lines and the shoulder line. The windows are large and give the cabin an airy feel. The rear gets an integrated spoiler and combination tail lamps. The BR-V beats all its rivals hands down when it comes to size as it’s very long at 4456 mm and also carries an impressive 2660 mm wheelbase. 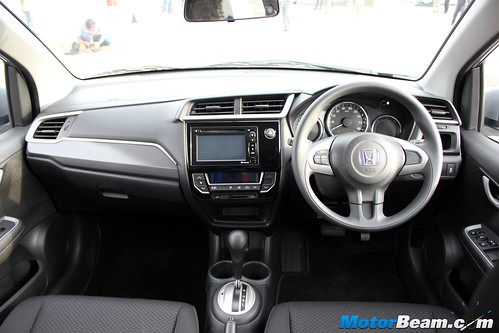 The dashboard of the BR-V is derived from the City and this is a very good move by Honda. Point being that the plain jane dashboard layout of the Brio/Amaze/Mobilio feels too basic and would lack sophistication when you talk about a crossover/SUV. The company has however carried over the steering wheel from the Brio based models but that’s about the only obvious signs on the interior about the BR-V’s Brio roots (other than the cupholders on the centre console). 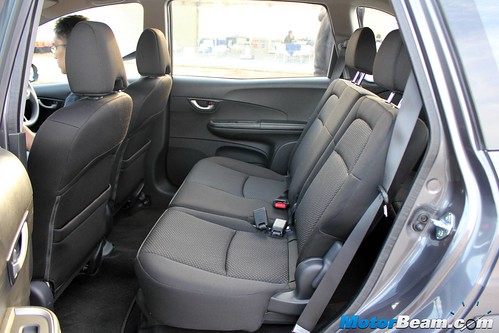 Plenty of space inside the cabin is a big boon, lots of storage bins too

The instrument cluster comes from the City and is a smart looking three pod unit with a nice multi-information display. All controls are accessible and easy to use but unlike the City, there is no touch panel for the AC controls, the BR-V getting the regular buttons. 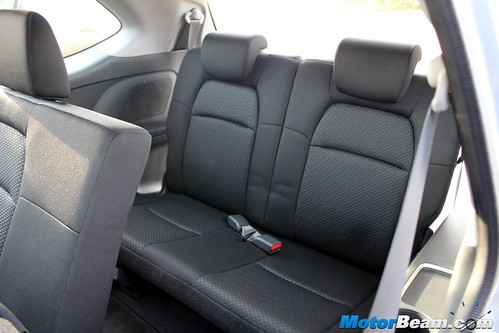 The seating arrangement is similar to the Mobilio with the last row bench ideally suited for small heighted adults or kids due to the knee up seating. The middle row seats have a higher range of travel and legroom can be adjusted in accordance to the last row of seats, there is no centre arm rest here. Overall there is good headroom, legroom and knee room in the BR-V but the cabin isn’t wide enough to make three in the middle row a comfortable fit. 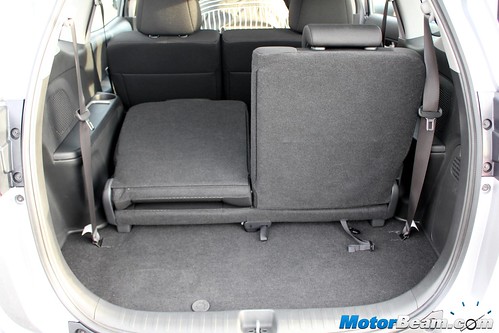 Even with the three row of seats, the BR-V boasts of a decent sized boot

All the headrests are adjustable, including those in the last row. Even with all the three rows up, there is still decent boot space and the middle and last row of seats can be folded in 60:40 and 50:50 ratio respectively. There is good storage bins inside the cabin including magazine pockets behind the front seats, large door pockets and space below the right most AC vents for receipts. 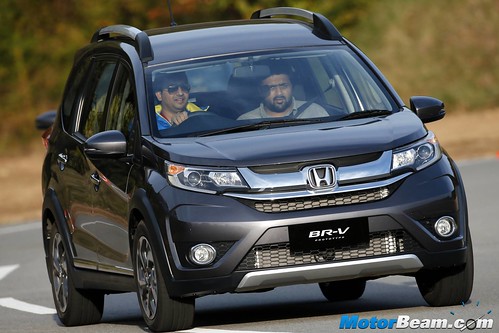 Honda will tweak the 1.5-litre i-DTEC motor for better response in the BR-V

Coming to engine options, there has been speculation on the specifications of the diesel mill. A 1.6-litre oil burner was rumoured to have powered the BR-V but it is the current 1.5-litre i-DTEC unit which is the engine of choice. Keeping the same engine in the Amaze, Jazz, Mobilio and City would make business sense and reduce the costs due to mass production. We expect Honda to use the same configuration of power and torque (100 PS and 200 NM). Mated to this diesel engine will be a 6-speed manual transmission and it looks like Honda is currently not considering a diesel automatic, even though the competition offers it (the Duster will get an AMT soon). Honda has also worked on improving NVH levels of the i-DTEC motor and the Mobilio was itself a step in the right direction as far as NVH levels go. 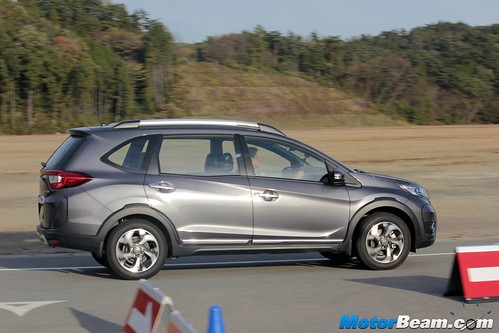 The petrol powered BR-V could do good sales for the 1.5L motor is excellent

The Honda BR-V will also come with a petrol engine and we are certain it will be the same tried and tested 1.5-litre i-VTEC motor, producing 119 PS of power and 145 Nm of torque. Mated to this engine will be a 5-speed manual gearbox. The petrol powered BR-V will also come with a 7-step CVT transmission. We drove the petrol powered Indonesian spec model, mated to a 7-step CVT transmission which has been tuned for improved response for the heavier BR-V. The engine produces about 119 PS and 145 Nm. Power delivery is quite linear with a strong mid-range and an impressive top-end. Honda petrol engines love to be revved and this i-VTEC is no exception. Nevertheless we will wait to drive the Indian spec car before we do a full blown review on the powertrains. As seen in the Mobilio and City, both these 1.5-litre engines are very frugal and will be among the most efficient in the segment. 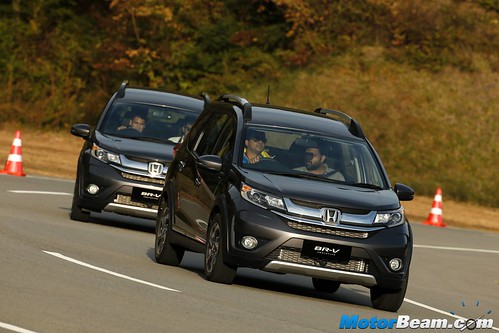 Balanced dynamics are very pleasing on the BR-V, ground clearance is 201 mm

Our stint behind the wheel was too short to be conclusive of driving dynamics. However, the dynamics are neutral with a good balance of ride and handling. The steering feedback and feel is similar to the Mobilio and the car remains stable at speed, thanks to the long wheelbase. Ride quality is good but the suspension felt on the stiffer side, a very Honda trait. But we can’t really give a verdict just yet since the test track was well surfaced without any undulations. Considering higher ground clearance of 201 mm and the increased suspension travel, the handling is pretty neutral. Body roll is there but is well contained and one simply doesn’t feel the length of the car when driving it. The brakes on the BR-V Prototype we drove offered good stopping power. 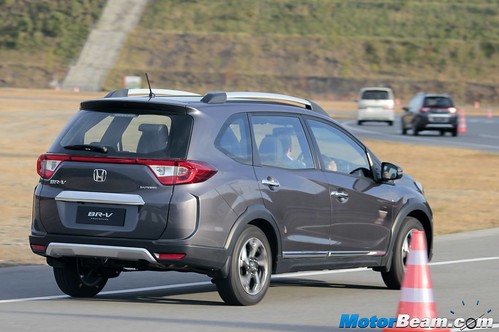 If priced right, the BR-V could pose a serious threat to the Renault Duster

With growing SUV demand and the worsening conditions of our roads, the Honda BR-V is likely to get very popular when it is launched in India. We expect Honda to price the BR-V between the Renault Duster and Hyundai Creta which will give buyers a unique alternative in the growing compact SUV segment. The option to seat seven people will be a boon in India and will be a big factor while making a buying decision. The BR-V will also make for a great alternative to MPV buyers who are looking for the extra seats while not wanting to compromise on the macho appeal of an SUV.

Honda chose to bring the Brio based BR-V to India and not the City based HR-V for cost reasons. Thus if priced right, the BR-V has big chances of success with Honda’s biggest USP being the added practicality offered by the bigger cabin of the BR-V. 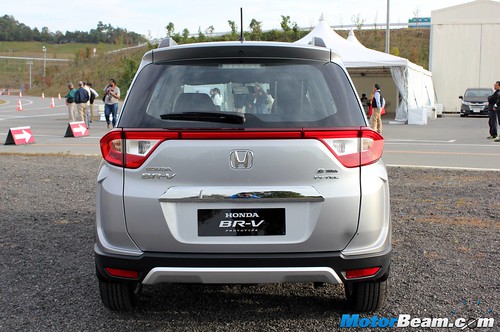