Honda hasn’t updated the Brio since its launch in India in 2011 and it is currently the oldest offering in the Honda lineup. Since it doesn’t have a diesel engine, it’s not been doing well in the market as well. The Japanese carmaker has now launched the Brio facelift with some cosmetic tweaks as well as a longer list of features. We take a quick spin in the new Brio to explore the changes.

Motor Quest: Honda Brio is the entry-level hatchback from the Japanese automaker which was showcased in concept form in 2010 and later in 2011 the production version was launched. The hatchback is positioned below the Honda Jazz in the company’s lineup across the globe and is currently running in its first generation. 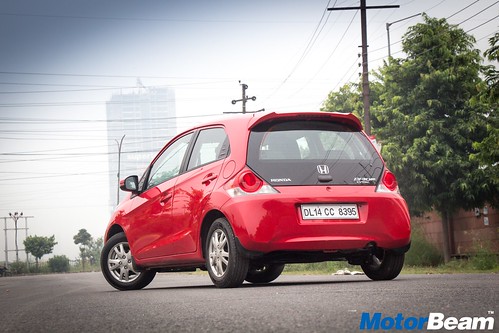 Exteriors – The Honda Brio has always been a unique looking hatchback in its segment and the styling is one of the biggest USPs of the Brio especially with that triangular rear profile. The new update on the exterior finally adds some freshness to the design after a big void of 5 years without any update. There is a gloss black grille up front and a sleek looking bumper with new details inspired from the Amaze. The side profile remains unchanged, they should have at least offered new alloy wheels. The rear is more or less the same as well, having tweaked tail lights and a revised spoiler with LED lights. 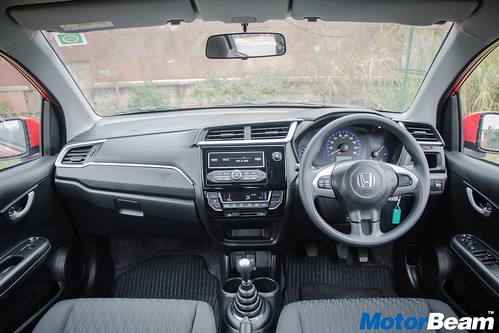 The new dashboard changes the look of the interior substantially

Interiors – Maximum changes are on the inside as you can notice the Honda Brio facelift gets a new dashboard, which is lifted straight from the Amaze facelift. However, the compact sedan gets a beige lower-half while the Brio gets all-black dashboard, which looks youthful. The range topping VX trim comes with all-black upholstery while the lower trims are offered with beige interiors. The steering remains the same but the instrument cluster is new featuring blue illuminated rings and new MID display. The centre console now offers a well integrated audio system with Bluetooth connectivity, audio quality is quite good for a car belonging to this segment. There is no auto climate control on offer but the digital AC controls which look like auto AC but are actually manual, is a neat touch. 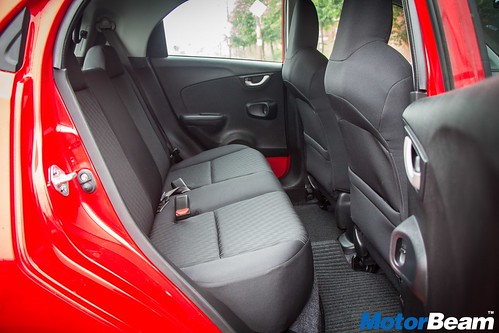 There is a Max Cool function for the AC which actually puts the fan to max and lowest temperature setting, which is a good feature to have when it’s super hot and you just want the AC on full blast when you get inside the cabin. You also get power foldable and adjustable ORVMs with blinkers on the VX trim. The driver’s seat gets height adjustment along with steering wheel adjustment. The seats are comfortable and well spaced out, rear legroom is decent but three passengers at the back would be a tight fit. Boot space at 175-litres is average considering the bigger capacities of hatchbacks in this segment. 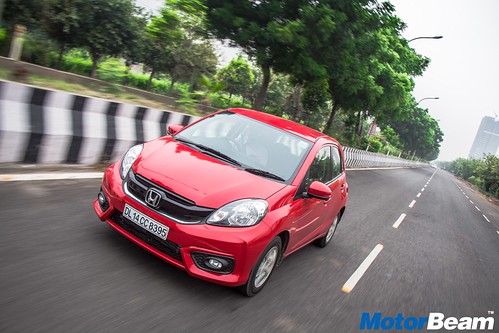 Performance – Powering the updated Honda Brio is the same 1.2-litre, 4-cylinder i-VTEC petrol engine that churns out 88 BHP at 6000 RPM and 109 Nm at 4500 RPM. As usual, it is a free revving Honda engine that loves to redline any time you want it to. The car feels quite peppy with this engine in city traffic. To make the best of this engine, you need to rev it hard. Mid-range is strong and it gets more exciting at the higher end of the rev band. NVH is well under control and you don’t hear much of the engine unless you rev the beans out of it. 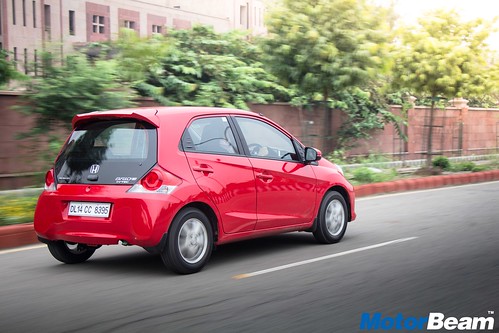 The Brio continues to offer 5-speed manual and 5-speed automatic transmission options unlike the Amaze facelift which gets a CVT now instead of the torque converter. The manual gearbox feels slick and tactile to use and along with the light clutch, many of you won’t complain about driving it in traffic. The 5-speed auto gearbox feels much better than the CVT and is a breeze to drive in traffic conditions. Yes, there is a slight lag while upshifting when you floor the throttle but it offers smooth shifts with part throttle. However, the Brio auto returns a claimed 16.5 km/l fuel efficiency which is lower than the manual’s 18.5 km/l claimed mileage. 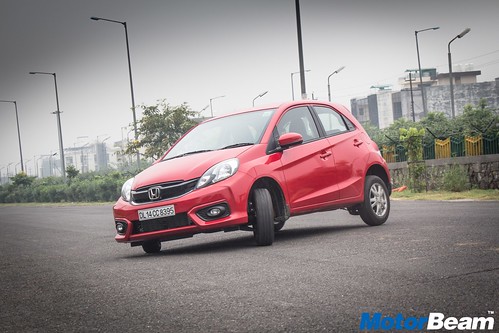 Driving Dynamics – The Honda Brio is underpinned by a very potent platform in terms of dynamics. This is why currently Honda has four products based on the same platform including two 7-seaters. The Brio can handle triple digit speeds with good stability on the highways. The ride quality is flat most of the times and it doesn’t unsettle on bad roads. Since it is a light hatchback, the handling is brisk and the Honda Brio feels eager to take corners hard. The steering feels direct and very predictable while cornering. Braking performance is quite effective too having a strong pedal bite. There are no mechanical changes so you won’t feel any difference compared to the pre-facelift model. 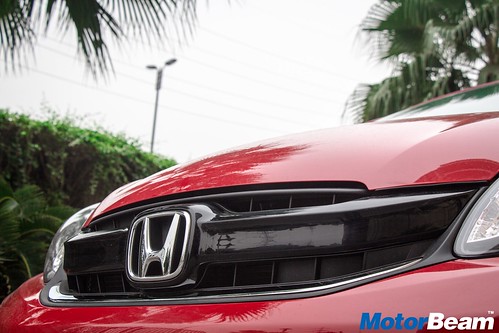 Safety and After Sales Service – The Honda Brio facelift is available with ABS and dual front airbags but only on the range topping VX variant. Honda should have offered the safety features at least as an option for lower variants considering the rising awareness of these features in India. Nonetheless, Honda’s badge is very well known for its after sales and reliability. They are offering a standard 2 year/40,000 km warranty with the new Brio. 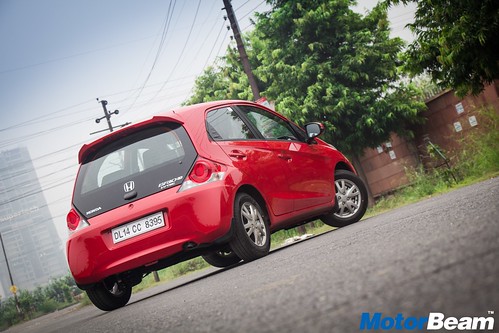 Verdict – The Honda Brio has always been a fun to drive car which offers good interior space and performance. It lacked when it came to features while a very plain-jane dashboard robbed the cabin of appeal. However, with this update Honda has given the Brio a new lease of life and has improved the whole package drastically. The Amaze derived dashboard not only looks fresh but has additional features to go with it. Amongst the cosmetic changes, we love the all black upholstery in the top variant. Though the mechanicals remain unchanged, the Honda Brio has become a much improved and appealing hatchback. 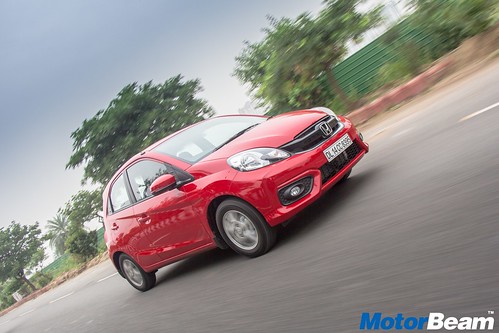 * Side profile and rear don’t get noticeable changes
* No touchscreen navigation system, rear parking sensors missing, no rear wipers
* ABS and airbags only offered on the range topping trim
* Still no diesel engine option with the Brio 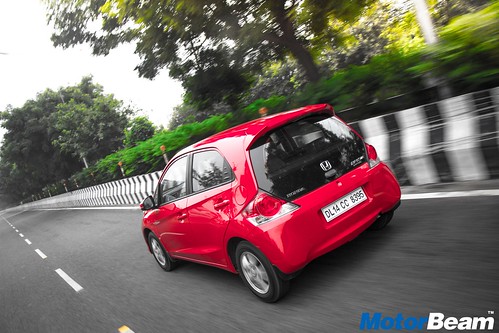 “I personally think the Honda Brio is a very practical car for use in a city like Mumbai. Its compact dimensions and light steering make driving and parking quite easy. It also has an automatic variant which makes life even simpler. I really like the new dashboard design which feels like a huge upgrade from the previous one. However, if Honda had managed to give it rear wipers, it would be a perfect small car in my book.” – Javeid Khan, Deputy Editor, MotorBeam.
“Honda didn’t update the Brio for a long time and it was getting aged now. In fact, the Amaze which is based on the Brio came later to the market and got facelifted before the Brio itself. The facelift makes it much more appealing now and personally I love the red colour with piano black grille and all-black interiors. It is already a good fun-to-drive hatch and has a lot of potential for after-market modifications.” – Aariz Rizvi, Assistant Editor, MotorBeam.

Honda Brio Sales Fall To All Time Low Of 74 Units