The Mahindra e2oPlus is more practical, offers good space and has a feel-good factor

The Mahindra e2o has been available in the market since a few years now but the company hasn’t been able to move out the electric vehicle from showroom floors. In a bid to generate more interest in its electric vehicle, Mahindra has now revamped the e2o and christened it the e2oPlus. The e2oPlus comes with some cosmetic changes and equipment upgrades over the older model, but the most significant addition are the 2 doors at the rear which make the EV more practical.

Motor Quest: Electric cars haven’t gained popularity in the Indian market and there is still a lot of time before them to gain acceptance here. In fact, besides the e2oPlus there are no other electric cars that are priced in affordable brackets and most other electric cars are positioned in premium segments. 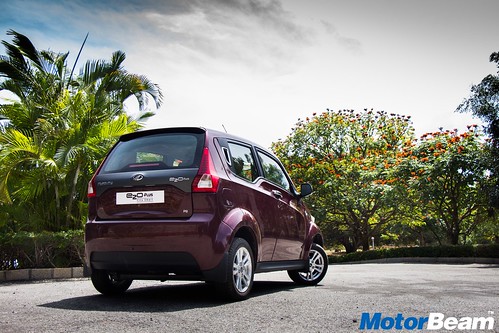 The new styling of the e2oPlus is quirky and youthful

Exteriors – There are a lot of changes on the outside. First and foremost, the e2oPlus gets a grille which bears a lot of inspiration from the XUV500. The bumpers also get a tweaked design while the headlamps come with projectors. The side profile isn’t too cluttered and it is best described as quirky due to the shape of the rear windows and the raked waistline. Rear door handles are mounted near the C-pillar. The rear of the e2oPlus is rather pleasant looking thanks to well-shaped tail lights and a boot lid that comes with a thick black insert. The e2oPlus has a typical tall-boy design but the puny wheels make the car look under-tyred. 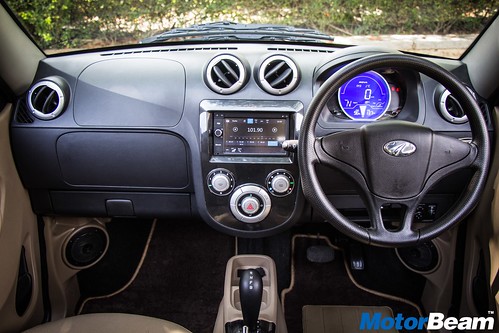 Interiors – The dashboard of the e2oPlus has a similar layout as the e2o. The dashboard comes in a shade of grey while the seat upholstery, door pads, etc. are done up in shades of brown and beige. As soon as you enter the cabin, you notice that space at the front is a bit tight due to the shorter width of the car. However, all controls fall in easy reach. The steering wheel is a bit large and behind that you get a futuristic instrument cluster which displays a variety of information like battery status, speed, range, etc. . The circular AC vents are a bit inferior in quality though. The centre console houses a Blaupunkt touchscreen audio system which runs Android. The system has a lot of functions and even displays a lot of useful information about the car. Sound quality from the system is below par though. 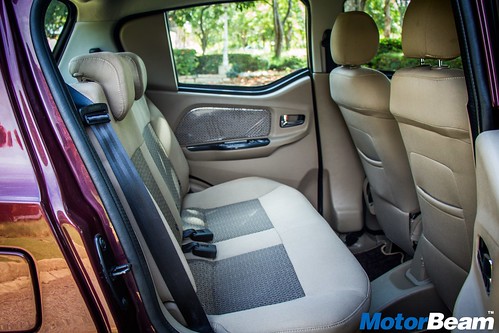 Interiors are decently spacious and equipment list is good too

The AC isn’t an out-and-out chiller but it does its job satisfactorily. The front seats offer good support for the thighs and even knee room and head space are pretty decent. However, the rear seats caught us by surprise. The rear feels quite spacious and 2 adults and can sit comfortably there. The seats offer pretty decent support too. Talking about the boot, it is pretty much compact but should be fine for your local shopping trips. The power window switches are placed near the handbrake just like the 2-door version. The Mahindra e2oPlus also has its own app. The app can be installed on your phone and then paired to the car. With the help of that, you can turn on the AC in advance, check the battery status, lock/unlock the car, etc. You can also use the app to activate Revive mode which gives the battery a slight juice which lets you drive it for 5-10 kms. 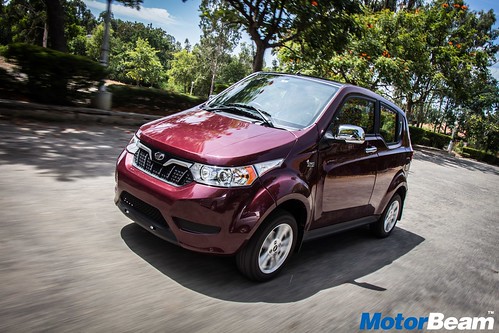 The Mahindra e2oPlus is very quick for city speeds 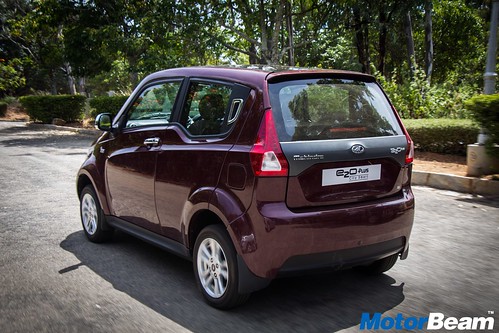 The motor is good for sedate driving mannerisms, range is limited

The e2oPlus feels effortless to drive if you’re not going bonkers with the throttle. It gains pace at consistent momentum and touches 60 km/hr in 9.5 seconds for the P8 trim and 14.1 seconds for the other trims. Top speed is claimed to be 85 km/hr and 80 km/hr for P8 and P2/P4/P6 trims respectively. However, the motor feels strained after 60 km/hr. There is also a Boost mode on offer which produces around 20% more power. The Boost mode sucks more battery and it gets switched off when the battery goes below 20%. The motor doesn’t make noise and all you get is a mild thrum sound. 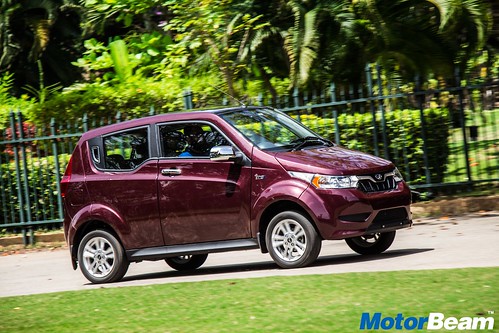 On full charge, the P8 trim is claimed to have a range of 140 kms while the other trims have a range of 110 kms. You get a 72 V Lithium-ion battery on the P8 trim while on the other trims you get a 48 V battery. Charging takes 9 hours for the top trim and 7.5 hours for the other trims. A quick charging option is offered on the P2 Fleet and P8 trims and the car gets charged to 95% in 75 mins and 90 mins respectively. The motor has a standardised consumption of 88 Wh and 99 Wh for the lower and top variants respectively. There are 2 charging slots on the car, one on either side. One slot is used to fit a normal charger that you can plug-in at your home or in your building while the other slot is for quick charging. However, a quick charging station will cost almost Rs. 5 lakhs and Mahindra is trying to market these charging points to large offices and corporate parks. Don’t be surprised if you find a couple of charging points on food malls of popular expressways too. 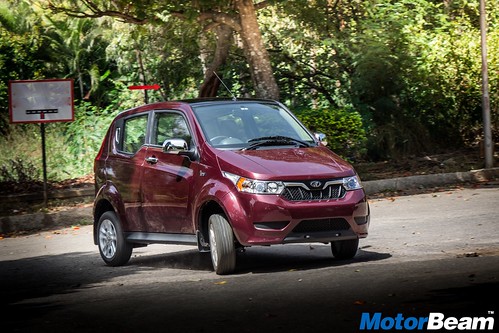 When you push the e2oPlus hard, there is some body roll to deal with

Driving Dynamics – The Mahindra e2oPlus has a slightly bouncy ride but otherwise the suspension and tyres do a pretty decent job of absorbing bumps. The steering is a bit heavy but feels at ease once the speeds increase. The e2oPlus isn’t an aggressive handler and the car is best driven sedately. It has some body roll too and the tyres also have just about average levels of grip. The brakes are spongy and you need to get used to the braking performance which is average. The car uses regenerative braking, meaning the battery gets charged while you’re braking. 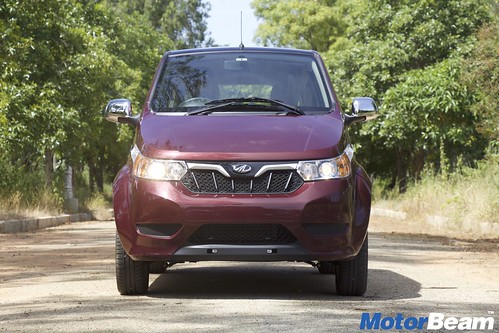 No airbags or ABS being offered by Mahindra with the e2oPlus

Safety and After Sales Service – The Mahindra e2oPlus doesn’t come with airbags or ABS but the automaker has used a unique steel space frame structure. Minor check-ups can be undertaken at any Mahindra service centre while major work will be carried out only at select service stations. The e2oPlus is basically a low maintenance car and customers can probably go for a check-up once a year. The battery is maintenance free for up to 5 years as claimed by Mahindra. The battery also comes with a 3-year/60,000 kms warranty. 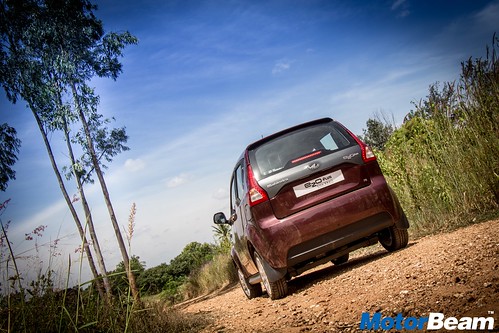 The e2oPlus offers a much better package with more practicality

Verdict – The Mahindra e2oPlus comes with a lot of technology and it is good to see a company bringing out a pure electric car at a relatively lower price. However, the biggest issue is that the car has a low range on a full charge and plus we lack infrastructure for car charging too. Another roadblock for Mahindra could be the fact that most buyers looking for a car in this price bracket will compare the e2oPlus to other premium hatchbacks which offer more space and value. The e2oPlus is a great effort, no doubt, but it remains uncertain on how the car is going to be accepted in the market. 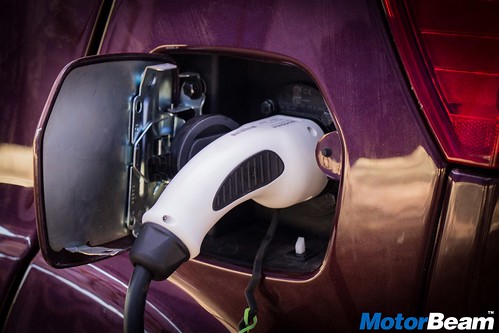 The quick charge system cuts the time drastically but is expensive 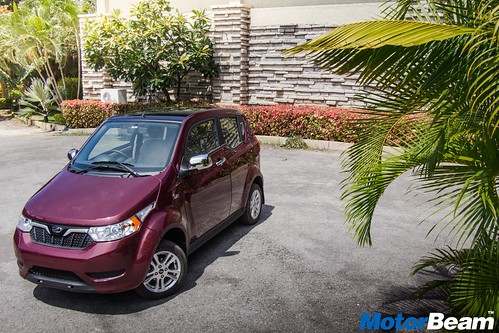 The e2oPlus is offered in four variants including a fleet version 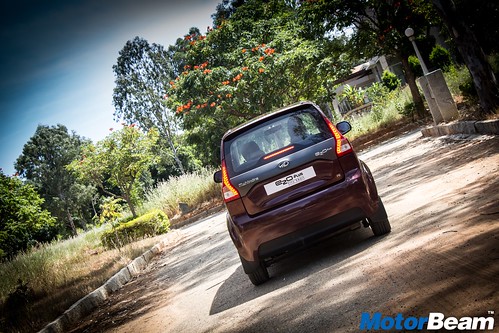 “The Mahindra e2oPlus is a fun car to drive especially with the boost mode, it is quick to respond. Mahindra has managed to carve out good space at the rear with ample legroom but I felt the car is a bit narrow. Since I’m a plus size, my shoulder was rubbing with Parth while driving. Otherwise it is a more desirable package than before.” – Aariz Rizvi, Assistant Editor, MotorBeam.
“Mahindra has incorporated a lot of tech in the e2oPlus and I like that. The car looks better now and is decently practical too. The battery range is a bit limited so the car should be fine for those who don’t have a long daily commute. The e2oPlus is a good buy if you want to do your bit for the environment and don’t mind skipping premium hatchbacks to pick this one.” – Parth Gohil, Senior Road Tester, MotorBeam.

News highlights of the day include Volkswagen, Hyundai, Mercedes-Benz and Skoda. Volkswagen Golf - The Golf is a popular premium hatchback in   END_OF_DOCUMENT_TOKEN_TO_BE_REPLACED