What could you possibly do on a hot summer day in Pune city? Well for a scooter guy like me, the day turned out to be pretty good. Because when you have a powerful scooter with you, fun isn’t a long way and if it happens to be the update of the first 125cc scooter in India, it gets even better. Yes, it’s the Suzuki Access and it finally gets an update and it comes in two variants. I could get my hands on the standard variant which is without the disc brakes yet I am still pretty much impressed.

Motor Quest: Suzuki launched the first 125cc scooter in India in the year 2007 as the Access 125. The successor was the Suzuki Swish 125 with the same engine. The Access had a few stickering and colour scheme updates over the time while the 2016 version of the Suzuki Access gets an all new design. 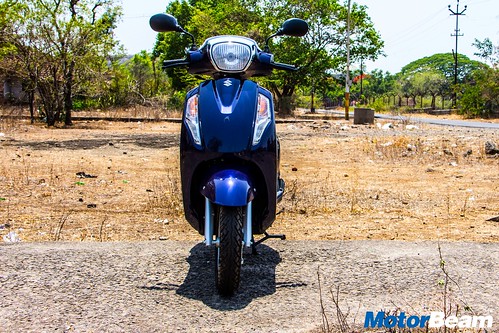 Styling – A first glance at the new Suzuki Access 125 and one could realise it isn’t the same scooter at all. The update has brought in a lot of design elements resembling the newer scooters currently in the market. For an instance, the front gets a retro look with a chrome covered square shaped headlamp. It gets a clean front panel with body mounted indicators and telescopic suspension at the front. The side panels go back in a curved design giving more of a retro based modern look. 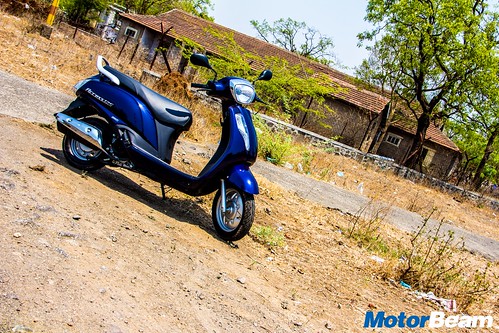 The tail-lamp being new in design doesn’t feel any different, it blends in with the design of the rear as a whole. The exhaust though gets a chrome cover and looks neat. Speaking of chrome, the Suzuki Access now also gets a chrome 3D emblem too. Even the tyre sizes differ where the front is bigger than the rear tyre. The test scooter was the standard variant without disc and it didn’t have the 5-spoke alloys which look brilliant. 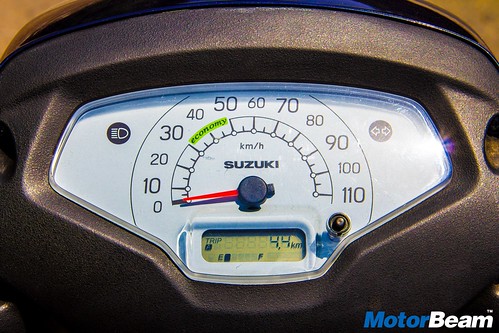 Instrument Cluster and Switchgear – The refreshed analog-digital console looks nice with a white background. The digital unit sits right below the speedometer. The speedo is analog while the odometer, fuel gauge and trip meters are in the digital unit. The new Suzuki Access gets first in its class twin trip meters and also a service reminder. The overall look at the console is simple and neat. The switchgear though is taken right from the older Access while the fit and finish is pretty decent. It also gets a one push central locking system, which is nothing but a quick shut button to shut the key hole. 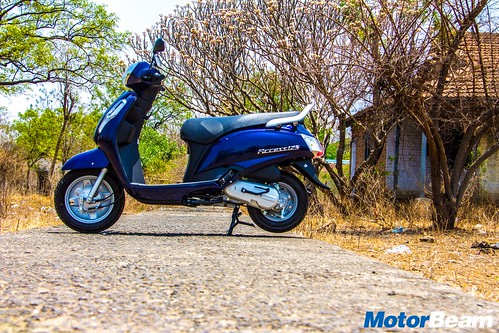 The longer footboard gives a lot of room for tall riders

Ergonomics – The scooters in the market currently feature similar ergonomics. The handle being tall and the seating position being upright. But Suzuki claims to have a longer footboard and a longer seat for the new Access 125. As there is no storage box at the front and rather just a front pocket, the footboard surely is longer, suitable for taller riders. The seat is long but gets thinner as it comes to the front and isn’t that comfortable there. It does have a softer cushion even for the pillion where the seat is wide. The front footboard being longer gets a pair of hooks for luggage carrying convenience. 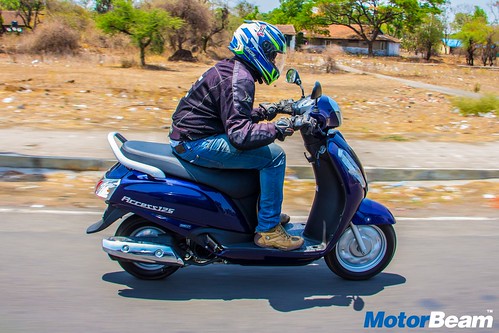 Performance – The Suzuki Access 125 was the first 125cc scooter for the Indian market and the engine has been the same since 2007. The 2016 update of the Access gets the same engine but it’s lightweight and robust thanks to Suzuki’s SEP technology. Due to which it is slightly torquey in nature and produces 0.5 Nm more than the older Access. The new Suzuki Access produces 8.58 BHP of power at 7000 RPM while churning out 10.2 Nm of torque at 5000 RPM. As the numbers suggest, the torque comes a lot early and hence the mid-range for this motor is fantastic. And we start pushing the motor, it could reach the ton very easily. Initial acceleration is also punchy and the scooter gets moving very swiftly. 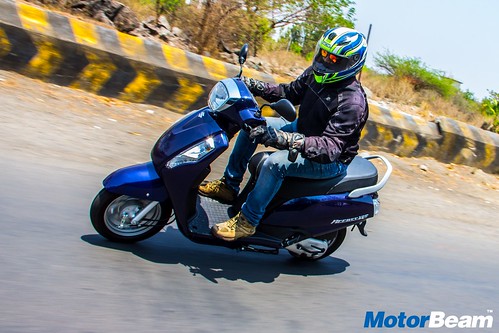 Power delivery is linear and the Access gains speed easily

As the new Access 125 features the same engine, the NVH levels should be similar while they are rather better. There are no vibrations and the engine isn’t noisy at all. Riding between 50 to 70 km/hr is best suited for the engine and if it’s pushed till 100 km/hr, some vibrations do kick in. The best part of the engine is the throttle response, with the twist of the throttle, the engine responds quickly and gaining speed upto 80 km/hr is an easy task. 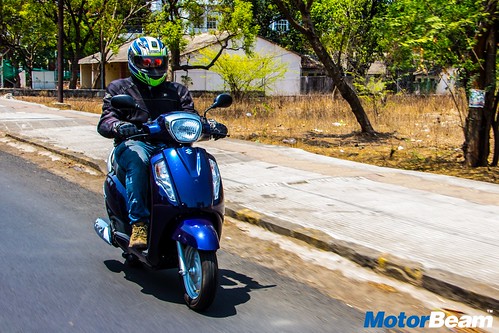 Riding Dynamics – Riding dynamics of a scooter are based on the way the scooter suits a person and the way it responds to the actions and moreover how the ergonomics help. The Access has had the best ergonomics and the elongated seat and footboard give more room for comfort. The Suzuki Access has always had telescopic suspension at the front but now it has a 12-inch front wheel adding to the stability. The weight of the older Access always kept it stuck to the road but the new variant weighs a mere 102 kgs which is even lighter than 110cc scooters! 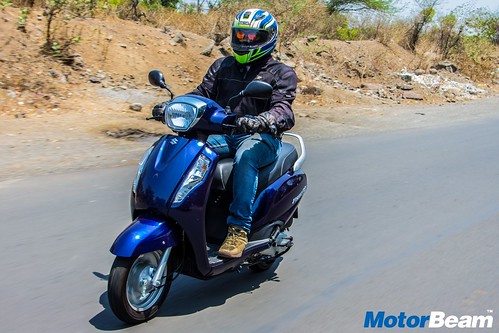 The ride quality is amazing and the Access does everything swiftly

The lighter weight and more torque makes the scooter quick and the telescopic suspension helps a lot in stability even while cornering. The brakes are very effective and the combination with MRF tyres works well. Our test vehicle was of the standard variant which didn’t have the disc brakes but the disc variant would surely provide better braking confidence. The soft suspension setup with a soft seat and no harshness gives a great ride quality. 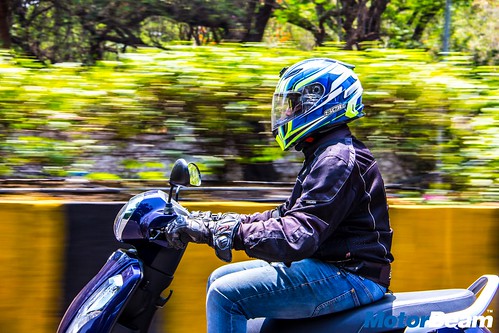 Riding the Access is comfortable and amazing at the same time

Verdict – The Suzuki Access 125 is an excellent scooter and has had its presence since 2007. The 2016 update has just made the scooter look more beautiful and a better performer too. The robust nature of the engine and the soothing ride quality surely makes the scooter appealing. The Suzuki Access 125 competes directly with the Honda Activa 125 and hence the pricing which is kept close to Rs. 70,000/- would be the decision maker. 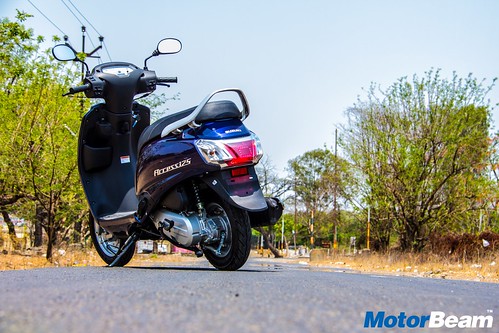 Everything is rather simple, not much of a looker from the rear 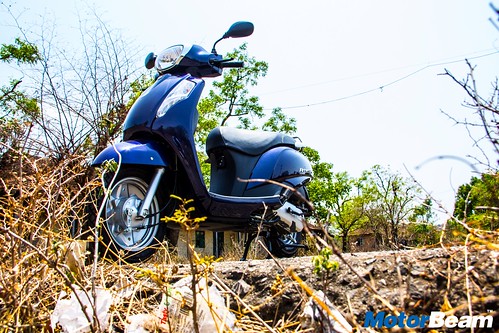 The front though fancies a lot of attention 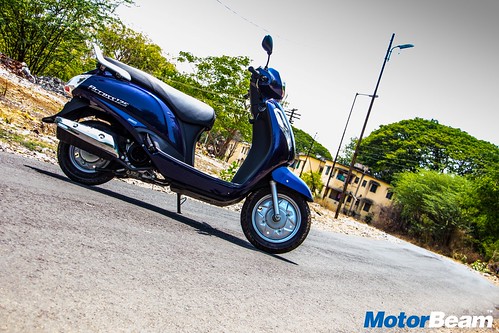 “The Suzuki Access 125 is am amazing scooter. Comfortable ergonomics and a powerful engine appeal a lot. The new design isn’t much of a looker but Suzuki has done a beautiful work with the front modern-retro look. The ride quality is amazing and the scooter is pretty stable at high speeds. The economy range would be 30 – 50 km/hr but the scooter stays alive post 50 till 80 km/hr. The price factor is the one which would concern a lot, but as the Activa 125 has started the trend, the new Suzuki Access 125 is the perfect competitor now.” – Dhanil Vira, Road Tester, MotorBeam.