When people bought the Tata Safari 5-10 years back, their neighbours used to admire the big butch SUV and think that one day I will also get this beast home. However, now if you buy the Tata Safari Storme, your neighbours might throw a lot of questions at you – “Why didn’t you visit the Mahindra dealership?”, “What’s wrong with the compact SUVs from Renault and Hyundai?”, “What do you find so appealing in this two decade old SUV?”, etc. Well, I wanted to answer the questions of such curious neighbours out there. Hence I got the Tata Safari Storme facelift in the MotorBeam Delhi garage even after our Editor-in-Chief had the pre-facelift model for a while in the MotorBeam Mumbai fleet. 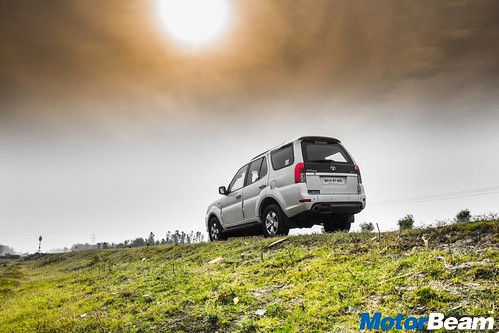 The design is simple but grows on you with time

One report of the Safari Storme won’t be enough to satisfy all the curious souls out there, so you might have to follow the long term review until the final report comes up. The Tata Safari is a legend and an iconic SUV in the Indian automotive scene and still a heart-throb for many enthusiasts. The bitter truth is that it has now lost its ground against the new breed of SUVs and compact SUVs. Technically, the questions raised against the Safari are correct. Yes, the Mahindra SUVs make more sense in terms of value since they offer a longer list of features (or gimmicks), swanky styling, car-like driving feel, a multitude of electronics, etc. which the Safari Storme doesn’t offer. 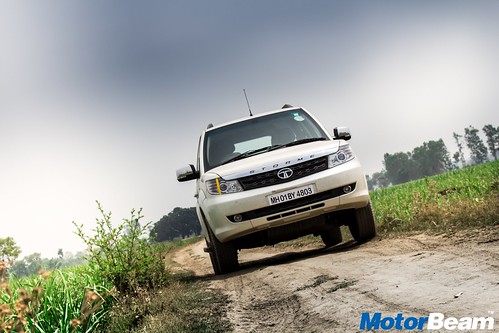 The humongous size is quite intimidating for fellow road users

The premium compact SUVs are also quite sensible alternatives for buyers seeking practicality and ease of driving. They are driver friendly, offer automatic transmission options, take less space on the road and are well engineered, which the Safari isn’t. Considering these facts, why on earth would anybody buy the Safari Storme? I’ve been living with the SUV for a while now and I must say that my attachment with the Safari is getting stronger with every passing day. The silhouette might look similar to the first ever Safari but the Storme looks more polished and the plain vanilla styling grows on you over time. It has got the traditional SUV proportions, tall stance and is huge in size making its presence felt on the road. 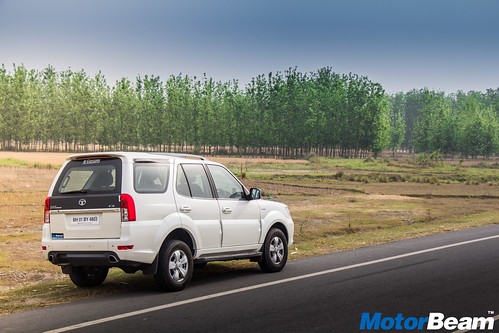 The big glass area makes for a great visibility outside

The high ground clearance makes you climb inside the cabin using the side step, not convenient for the elderly but you get a commanding view of the road when you are up there. One of the best things about the Safari is the driving position where you feel like the king of the road. None of the SUVs in its segment give you this feeling, not even those belonging to the higher segments. You get great visibility all around and the huge bonnet up front is clearly visible, so it’s easy to anticipate the distance of cars in traffic and obstacles when you park the vehicle and even while off-roading. The inside rear-view mirror is sizeable and shows you the entire rear windscreen without any obstruction. The ORVMs are huge as well, offering a clear view of your surroundings. Sadly there is no rear parking camera in the Safari but the proximity parking sensors do a good job of sensing obstacles you can’t see. 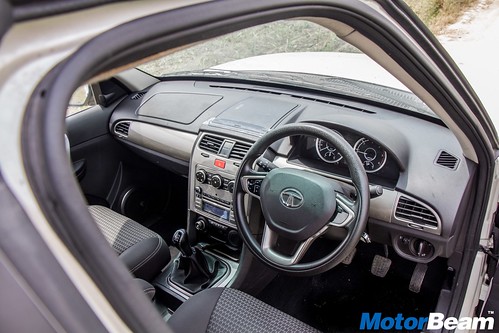 The interiors get black treatment, more convenient place to be in

The updated Storme now gets all-black interior theme, even on the range topping model unlike the outgoing Storme that had beige interiors. The beige cabin felt more airy but the good thing about the black interiors is that it’s maintenance free and isn’t a dirt magnet. Black also feels quite youthful and the new Zest inspired steering wheel makes the dashboard look fresh. The Harman audio system offers seamless and quick Bluetooth connectivity every time you enter the cabin with your phone’s Bluetooth switched on. Call quality is crisp and you finally get steering mounted controls for ease of use. Audio quality is epic for a car in this segment, it churns out clear acoustics. The Safari has a no nonsense interior, it offers fantastic space for three passengers at the rear and great cushioning along with dedicated second row AC vents. 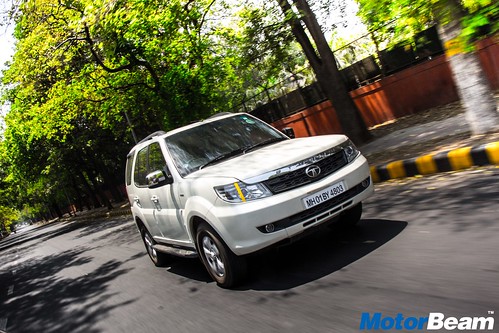 The engine offers good thrust to pull the hefty Safari

No doubt about the fact that the Safari is a heavy, two tonne vehicle but it comes with a gem of an engine. We haven’t got the Varicor 400 Storme but the 320 Nm oil burner is no less. It offers a wide band of torque to ride on, which kicks in early negotiating the turbo lag well under 1800 RPM. Lugging all that weight so easily with this engine makes you smile when you throttle it out, imagine what would happen with the more powerful Varicor 400 engine. The meaty mid-range pulls it cleanly and continues to do so with a strong top-end grunt. Many of you might find it noisy at higher RPMs but that loud roar to the petrolheads is quite satisfying and makes you actually feel that ‘the Storme is coming’. No pedestrian or vehicle dares to cross the beast’s path when its roaring and if they do so, their heart rate might increase with fear. Such things make you feel content while driving the Safari, hardly any other modern day SUV can do that. 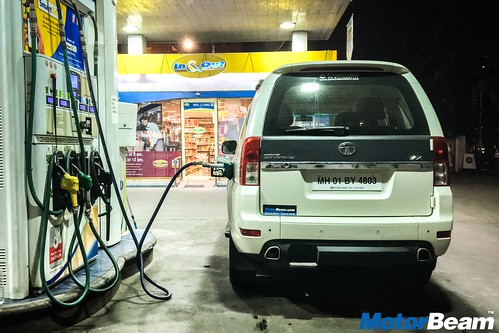 It is a diesel guzzler & makes you refuel quite often

The new self-adjusting clutch is extremely light to operate, which is a boon for city driving. Some say that it has a notchy gearbox and that’s not true. The gates are well defined and the shifts are tactile, it’s only that the gear throws are long. For me, long gear throws are fun, it gives you a raw and mechanical driving feel, which you rarely find these days in the newer lot of SUVs. Technically, a car being heavy isn’t supposed to be good for the dynamics but the Safari is a different breed altogether, feels like a tank. It makes you swing with body roll around the corners, which is surprisingly thrilling, you can feel the speed while driving, it just floats calmly over undulations and big craters without unsettling the passengers. 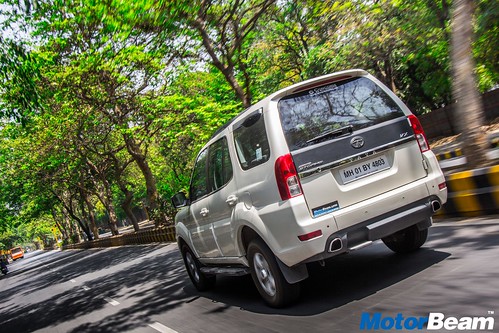 The ride quality is pliant, high speed stability is good

You might wonder what is an emotional connection with a car and how is it possible. When you live with the Safari and experience the whole combination of the aforementioned driving traits of the beast, you feel attached to the car. My first encounter with the Safari was driving the Dicor version and my initial impressions were as negative as anyone who would drive the Safari for the first time. But I gradually discovered my affection towards this SUV after driving it more and more. Nowadays, the newer lot of effortless, equipment rich, automatic SUVs drive you to your destination but the Safari is a rare gem that you drive yourself to your destination and feel happy about it. This is what makes you feel connected to the car. 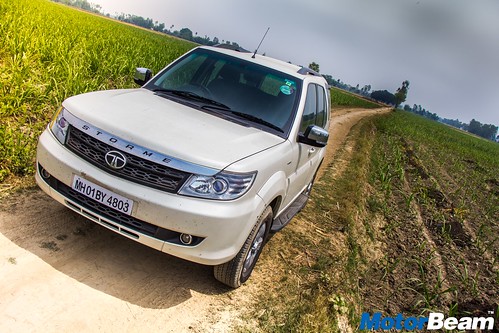 Yes, there are quite a lot of missing features in the Safari such as a touchscreen display with navigation system, rear parking camera, automatic climate control, sunroof, keyless entry and go, automatic transmission, proper third row seats, etc. but the driving feel it offers is quite unique which can’t be felt with a mere test drive. In this report, I have penned down some of the experiences so far with the Safari. Expecting to encounter new good or bad experiences with the beast in the coming reports which also includes a long 1500 km road trip from Delhi to Mumbai in the near future. Stay tuned as we discover some new traits of this big bad SUV. 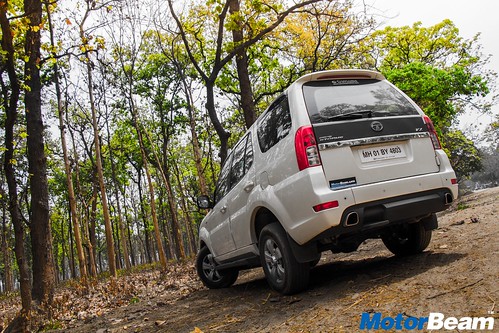