Staring into the first corner standing on the grid, you think of your strategy to lead the race right from turn 1. It’s a hot day and you can feel the sweat dripping down as you find it hard not to let go of the clutch until the lights go off. When you finally manage to hold the front end down as you come twisting off the start line, each gear shift is enough to make you grin as you dip through the first corner and you know you’re going to reminisce these moments. For life is racing, everything else is just waiting. The Apache has always made us feel that way and for years it has bespoke its racing creed. The TVS Apache 200 is something that carries this game ahead by carrying essential elements that the older Apaches have missed out on. We tested it on the track in January, and this time we put it through our signature testing style. Yes, we’ve had our fun on this marvellous machine.

Motor Quest: The Apache started out as a 150cc commuter back in 2006. The RTR series was launched in the subsequent years which marked the entry of TVS in the small capacity sports segment. With the launch of the RTR 180 in 2009, it has undergone just one visual update along with the addition of ABS to the respective models. The Apache RTR 200 4V was first unveiled in January 2016 with a launch lined up in the following months. 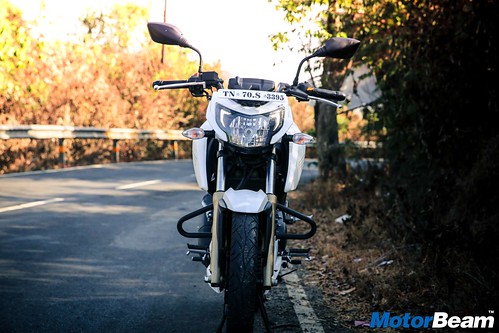 The headlight gets a much needed visual update

Styling – First thing that strikes after a glance at the Apache 200 is that how similar it looks to the previous Apaches and yet how refreshed it feels. The headlight gets a slight makeover which looks sharp and carries the iconic LED DRLs. The number plate on the top does look out of place but apparently makes up for the lack of a windshield. The new design on the alloy wheel is very well thought of and looks a lot in line with the petal disc. The fork gets the typical golden colour while the mirrors and the belly-pan are carried from the older Apache. LED blinkers could have also added a certain aesthetic value, but is it too much to ask? 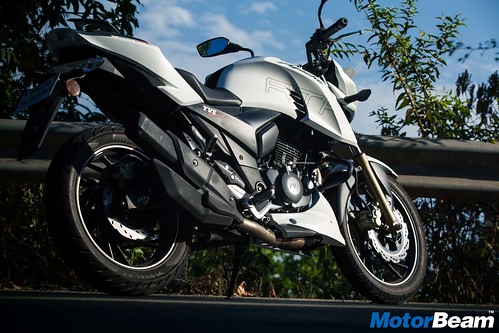 Styling is kept similar to represent the RTR family

The fuel tank on the Apache 200 is a very unique one because of its offset placement of the fuel cap. The shape of the tank is also kept similar but eliminates the need of a bikini fairing like the one seen on the Apache 180. The overall graphic design is kept quite subtle with the iconic ‘TVS Racing’ and the ‘RTR’ logos. The rear is beautifully crafted with the split seats and a slightly muscular styling. The tail isn’t as impressive as the awesome looking LED tail-light along with the chunky rear tyre. The muffler is a little awkward looking but starts to grow on you once you hear the exhaust note! The grab-rails, the small scoops beside the rear seat go very well with the overall design. 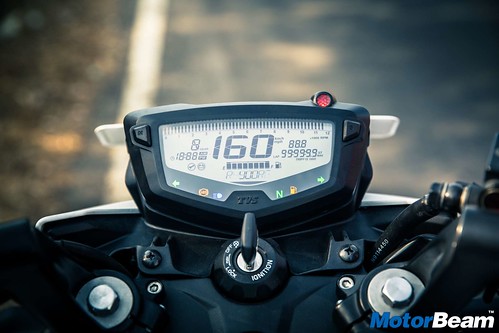 The most beautiful looking and feature loaded console in this segment

Instrument Cluster and Switchgear – The console on the Apache 200 shows just how much TVS has focused on improving each and every aspect of the bike. It would have been easy to stick the same old console from the previous versions, but no! The RTR 200 has a pretty solid instrument panel that gives you virtually every piece of information you’d expect from a 200cc bike. The large horizontal tachometer on the top is pretty useful in timing gear-shifts, while the information toggled includes two trip-meters, odometer, lap-timer, reserve fuel trip-meter, 0-60 km/hr timing and the best top speed. Other information includes a clock, service reminder, fuel gauge, gear position indicator and the speedometer which takes centre stage. The console is so feature loaded that writing it all itself is very exhausting. 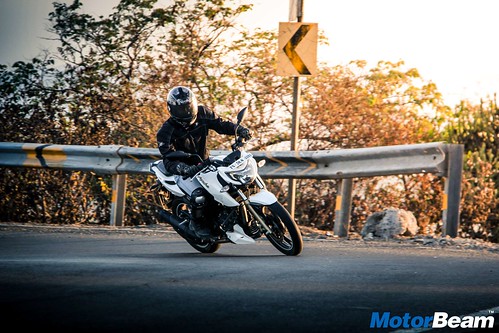 A good compromise between comfortable and sporty stance

Ergonomics – The Apache 200 carries a similar seating stance as that of the older Apaches. The footpegs are high and rear-set; however, the clip-on handles are a bit higher that ease the stance quite a bit. The handles are sufficiently distant and the console is also easy visible. The seat is weirdly shaped but however it is, it’s one of the most comfortable ones I’ve seen on a sport-commuter. The raised pillion seat also might seem to call for discomfort, but surprisingly it is very well cushioned. However, the tank shape and its matte finish does not facilitate for the best of grip for the pillion and one has to resort to holding on to the rider. 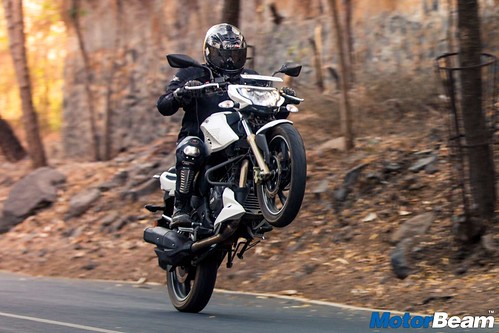 The RTR 200 absolutely loves to carry wheelies wherever it goes!

Performance – It’s easy to dismiss the Apache 200 spec-wise. A 200cc oil-cooled engine, that produces barely 20 BHP is a bit below 2016 standards. However, this Apache is much more than mere on-paper numbers. It has got that typical racing throttle response (where have I heard that before?) that gives you no time to shift gears as you hit the rev-limiter even before you know it. The first gear does 35 km/hr, second does 58 km/hr, third maxes out at 78 km/hr while the fourth hits the ton. It’s not that short-geared, it is just that quick! The 18.1 Nm of torque is enough to pop wheelies at your mercy, whenever and however you want ’em. The exhaust note isn’t as impressive as the RTR 180, but is still better than most other bikes in this segment. 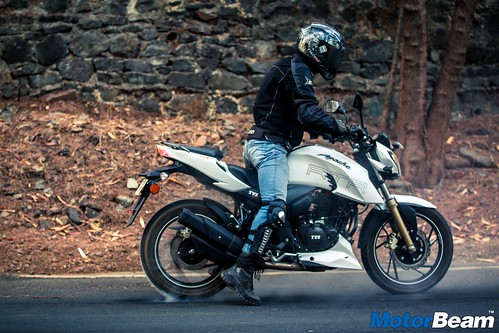 This one never says no to have fun

The engine is so refined that there are virtually no vibrations up until the high mid-range. The four-valve setup sure does make the engine a lot more breathable. It can cruise at 100 km/hr with the revs barely at 6500 RPM with impressive NVH levels. Even at these speeds there is ample grunt to push to 120 km/hr without stressing the engine too much. The engine is quick revving and does the 0-100 km/hr sprint in just 13.17 seconds as per our VBOX tests. Not that quick, but the wind-blast sure does impart that feeling. 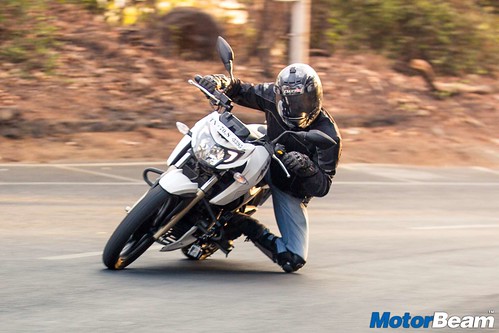 The Apache 200 absolutely loves to be around the corners

Riding Dynamics – The Apaches have always been agile and eager to frolic around, and the Apache 200 does just that in the best way possible. The slightly increased wheelbase makes it a little relaxed around corners that adds to confidence out on the roads. The Pirelli tyres on our test bike held pretty well under solid braking and not once did the front lock dipping into the corners despite the absence of ABS. To be honest, I’ve never trail-braked so much even on a track! The engine is quick enough to respond mid-corner and the exit is just the way you’d want it to be. The high clip-on handles do create an awkward cornering stance, but nevertheless do not compromise on comfort and dynamics in the middle of a corner. 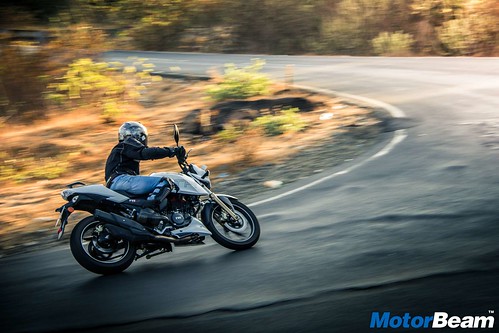 This Apache is impressively fast around the twisties

The Apache 200 handles exactly like a sport-commuter, agile yet tameable

Coming on to regular usage, the Apache 200 is really a well sorted package. It feels a tad little, but the feeling is still better than the previous Apaches. The front brake lacks that initial bite, but works really well and has a gradual feedback. However, the rear could’ve been better considering it’s meant to be used on roads more often than on race tracks. The stock suspension setup on our test bike was a little too soft and honestly, it felt excellent for regular usage. Straight-line stability is impressive up to 90 km/hr after which, the lack of a windshield aids in uninterrupted continuous wind-blast on to the rider. This seriously makes the bike feel incomplete even when out on urban highways where speeds are barely 100 km/hr. 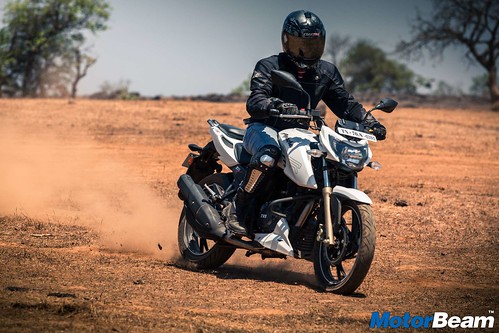 ABS model not on sale yet? Let’s have some fun then!

Verdict – It goes without saying that the Apache 200 is the best production bike in many aspects that TVS has made till date. It has overcome its engine vibration problems and stability at high speeds have improved by leaps and bounds. While the cheapest model might not get you the best of the lot, the Pirelli tyres and ABS are a must have. With the price being attractive, the Apache RTR 200 sure is bold enough to play with the biggies. Of course TVS has won this race with the Apache 200 with so many improvements to it, but as it is said, “The championship is still long” and there’s yet a lot to achieve in the long run. 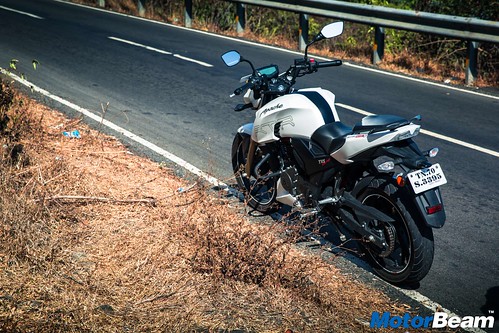 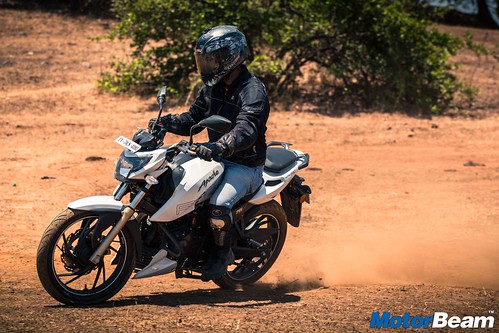 Agile yet tameable, perfect dynamics for a street bike 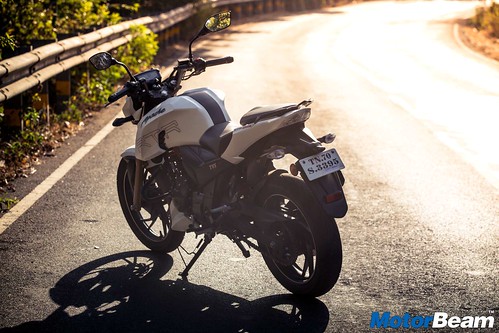 “I honestly expected more from the TVS Apache 200, more so after all the hype created by the Draken concept more than 2 years back. As a motorcycle, yes, it’s very good but in no way is it a revolution, something TVS’ key rival has always managed to do. More than the bike, is the disappointing sales experience of the motorcycle as still not all dealerships have started to stock the Apache 200, leading to frustration for prospective buyers. Why launch a motorcycle if you can’t deliver it in the first place?” – Faisal Khan, Editor, MotorBeam.
“The TVS Apache RTR 200 4V is a beautiful motorcycle with lots of design cues appealing to the muscular design. The engine though which feels like a bored-out version of the TVS Apache RTR 180 can be also called the better version of it, as the way the refinement has been kept in mind, this is by far the smoothest Apache. The riding dynamics again play a major role in keeping the Apache more desirable with a comfortable yet aggressive riding posture and light weight. The only thing that would confuse anyone to buy the 200 4V is to choose among the different colours, Carb/EFI and the tyre options too. It will be the best choice to stick with the Pirellis while the others can be chosen at personal preference.” – Dhanil Vira, Road Tester, MotorBeam.
“I’ve always liked the TVS Apaches for their agility and their acceleration. However the engine vibrations have always disappointed me. The RTR 200 is exactly what was needed from the TVS stable which was long due since the previous update to the RTR 180. I can’t help but compare the RTR 200 with its smaller sibling even when this one carries slightly superior hardware. The performance numbers just fail to create an impression in the times of KTMs and Benellis. Nevertheless, the Apache 200 is a very good product from TVS even though it is a few years late.” – Adwait Babras, Road Tester, MotorBeam.