The 2017 Hyundai Tucson soft-roader has a good blend of comfort, features and a stylish design

Hyundai has been on a roll in the Indian market. They have a product in almost every segment and most of them are doing really well. The automaker had launched the first generation Tucson in India more than a decade back but the car failed to create a stir in the market. The company has been selling the Creta and Santa Fe SUVs, and to fill the void between them, Hyundai has now launched the third generation Tucson in the Indian market. 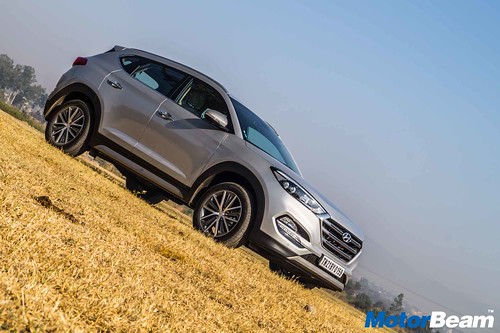 Hyundai has implemented the Fluidic 2.0 styling on the Tucson

Exteriors – On the outside, the Tucson definitely looks and feels much bigger than the Creta and it has good road presence. Hyundai has implemented a the Fluidic styling philosophy on the Tucson. The design is well proportioned and the car manages to look quite pleasing. The body has a lot of curves unlike the Creta which has a boxier styling. The Tucson also has just the right amount of chrome and the styling doesn’t feel overdone at all. The front fascia looks very appealing and it has dual barrel projector headlamps, LED DRLs and fog lamps. The headlights are super bright in the dark and illuminate the road well. 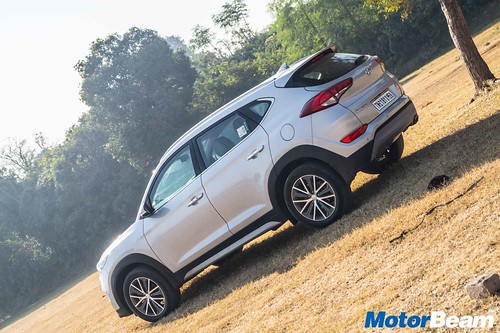 The Tucson looks very pleasing and the design is a hit

The side profile reveals the low ground clearance and the not-so-long length of the car. You get diamond cut alloys which is standard Hyundai fare now. On the manual variants, you get 17-inch wheels while on the automatic trims, you have 18-inch wheels. Move to the rear, and you notice that the curves make the car look a bit smaller than what it actually is. The design of the LED tail lamps bears a lot of inspiration from the ones on the Elite i20. There’s also dual exhaust tips finished in chrome. The body cladding runs across the length of the car, giving it a butch feel. 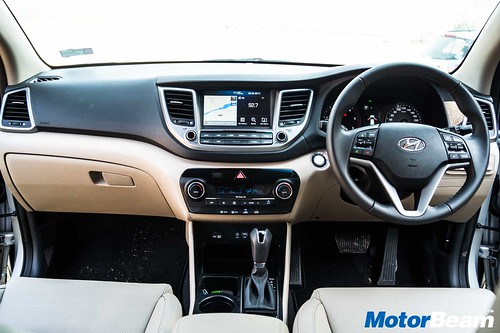 The dashboard is similar to other Hyundai cars

Interiors – Move to the inside and you are greeted by a typical Hyundai dashboard. The steering wheel has that familiar design while the centre console and instrument cluster also give you a reminder that you’re sitting in a Hyundai car. The dashboard has great quality all over with the fit and finish also being great. The steering wheel, gear knob and door pads are wrapped in leather and feel good. The steering has the usual buttons for audio and phone controls along with cruise control. The 8-inch AVN system comes with a very responsive touchscreen which also looks crisp. You get navigation, voice recognition, Apple CarPlay and Android Auto too. The audio system is one of the best sounding ones in this segment. 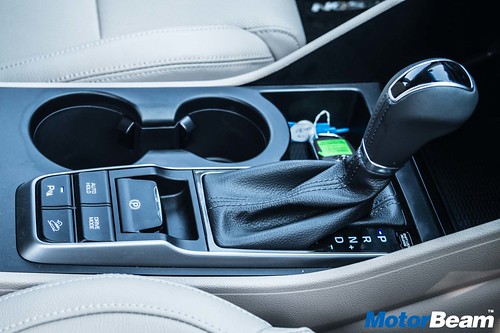 Lots of features on offer, but some are missing too

There is a dual zone climate control system which works really well. It chills the cabin pretty efficiently. The instrument cluster displays a variety of information like service details, fuel efficiency, average speed, trip details, distance-to-empty, etc. The IRVM comes with an anti-dazzle feature and the top part also displays the direction in which the car is facing. The ORVMs too have anti-dazzle function along with heating and auto-folding features. You get a push button start/stop system and the smart key is the same one that is also provided on the Grand i10, Elite and Active i20, Creta and Elantra. The least Hyundai could have done is offered a better and more premium looking key on the Tucson and Elantra. You also get a dual horn which sounds similar to the one on the Creta. There is a rear camera on offer along with parking sensors at the front as well as rear. Hyundai has skimped on a sunroof though, which should have ideally been provided at this price point. 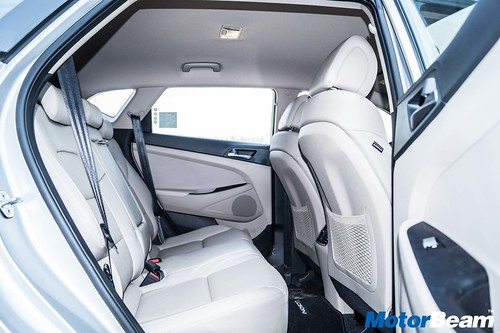 The seats are very comfortable and space is good

The front seats are brilliant in terms of support and cushioning. The driver’s seat is 10-way power adjustable so finding a good driving position isn’t difficult. Do note that the driving position doesn’t make you feel that you’re driving an SUV and it is very car-like. The front passenger seat gets manual adjustment and it doesn’t seem to have height adjustment while the seat is placed a bit too low. You get a large armrest at the front, though you cannot adjust it for rake. At the rear, the seats are again pretty comfy and can be reclined too. Knee room is nice while head room and shoulder space are good too. Under thigh support is satisfactory and due to the not-so-large transmission tunnel, you might be able to squeeze in a third passenger too. 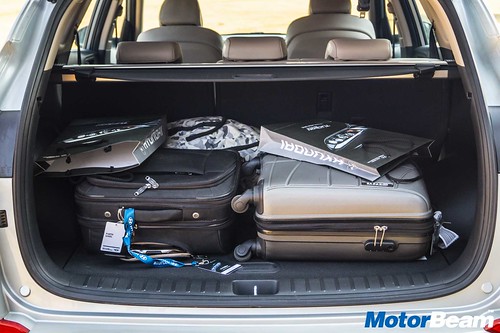 Outward visibility from the car is great thanks to the large windows. There are quite a few storage spaces and cubby holes on the inside. The front armrest can be opened up to reveal a large storage space and it also comes with a small bin which is removable. Near the front passenger seat, on the RHS, you get a small magazine holder. There are bottle holders on each door and cupholders on the rear armrest. The centre console also has a couple of cupholders and other storage spaces. The boot is large at 513-litres and the tailgate is electrically operated. 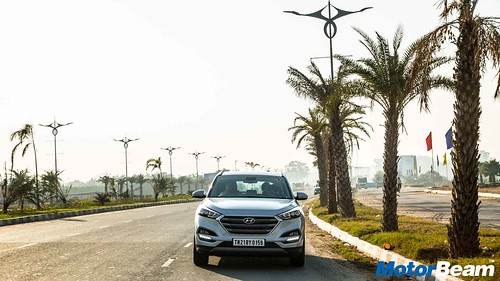 The Tucson is offered with 2.0-litre petrol and diesel engines

Performance – The 2017 Hyundai Tucson is offered with a choice of 2.0-litre petrol and diesel engines. Both the engines are offered with 6-speed automatic and manual transmissions. We couldn’t get to drive the manual transmission variants though. The petrol engine is the same Nu unit that powers the Elantra and it produces 155 PS of power at 6200 RPM and 192 Nm of torque at 4000 RPM. The Nu petrol engine has an ARAI-claimed fuel efficiency of 13.03 km/l (MT) and 12.95 km/l (AT) but real life figures can be much lower than that. 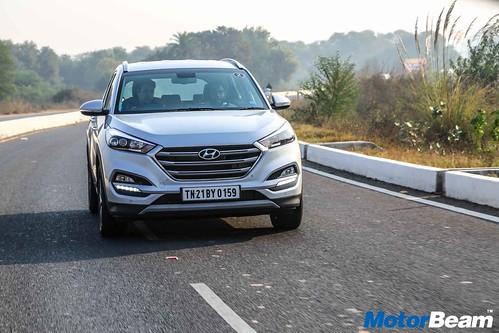 The petrol engine has adequate performance but isn’t punchy

Between both the engines, our pick would be the diesel engine without any doubt

The petrol engine isn’t that exciting to drive and feels underpowered due to the weight of the car. People who drive sedately aren’t going to complain but if you wish to seek thrills from this unit, you’ll be fairly disappointed. Sport mode doesn’t help matters much either while Eco mode tapers down performance for that wee bit extra fuel efficiency. The engine is pretty refined though and is also very silent. It even revs freely all the way till the redline. If you’re buying the Tucson, the petrol engine should be your choice only if your running is too less and you absolutely hate the idea of a diesel car. 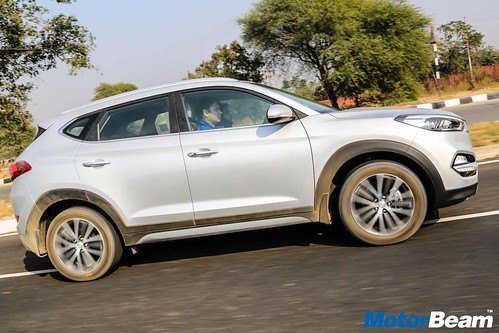 The diesel engine has impressive performance but is a bit noisy

The 2.0-litre CRDI unit has been brought down to India for the first time. It produces 185 PS of power at 4000 RPM and 400 Nm of torque from 1750-2750 RPM. The best part about this engine is that turbo lag is very well contained and once you past the little lag, there is a very strong torque wave which makes the Tucson accelerate quickly. The engine sounds a bit rough, but I think that could be attributed to the fact that our test car had done just 750 kms at the time of testing. The engine has good punch all the way till 5000 RPM and doesn’t really feel out of breath. The ARAI-claimed fuel efficiency figures are 18.42 km/l (MT), 16.38 km/l (AT) but we managed to extract 12-13 km/l from the AT trim. 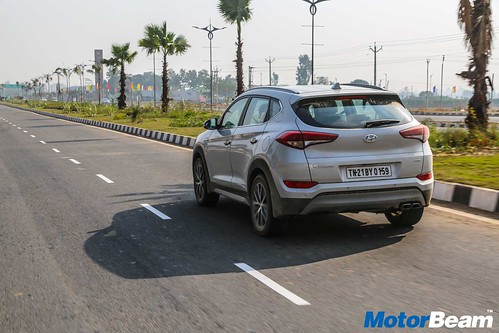 Apart from that, there are Eco and Sport modes along with a regular city driving mode. The Sport mode increases the fun factor by a small amount while Eco mode lowers down the performance slightly. The 6-speed automatic gearbox is a nice unit and does its job well. Gear shifts feel very seamless and the entire process is quite smooth. There is no S mode on the gearbox, but you do get a manual mode. Hyundai has also skimped on manual paddle shifters on the Tucson. All in all, our pick between both the engines would easily be the diesel unit thanks to its performance and efficiency. 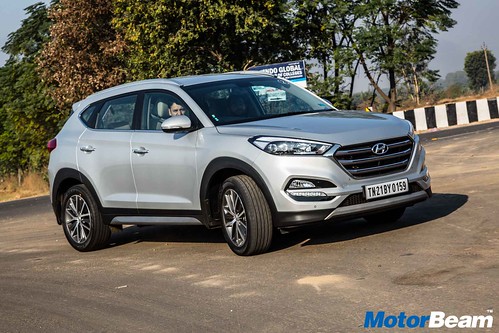 Driving Dynamics – The 2017 Hyundai Tucson comes with McPherson Struts up front while at the rear you get a multi-link transmission. The suspension set-up is nice and most of the potholes, broken patches of road, etc. are tackled easily. The car doesn’t lose composure easily and remains fairly stable. However, there is some vertical movement while driving fast on uneven terrain. Ground clearance is just 172 mm which is pretty average for an SUV. Since we drove only the automatic variants, we couldn’t test the 17-inch wheels that are offered on the MT trims. However, the AT trims come with 18-inch Nexen tyres in 225/55/18 size. The tyres are decent enough for regular use but yes, you do get better choices for this size. Hyundai might have probably chosen these wheels to keep costs in check. If you’re willing to do some aggressive driving, the Nexen tyres might show their shortcomings. The steering is better than older Hyundai cars but it still lacks feedback and feel, especially at high speeds. The steering could have been a bit more confidence-inspiring. The Tucson comes with all 4 disc brakes and they are very sharp and have no issues in shedding speeds. 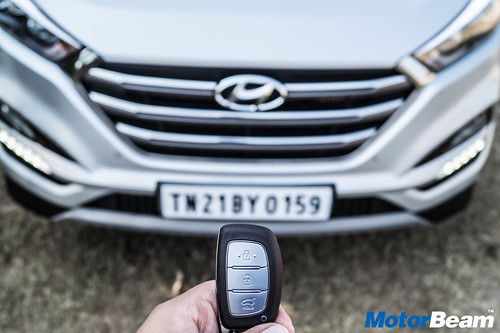 Lots of safety features are offered on the 2017 Hyundai Tucson

Safety and After Sales Service – We all know that Hyundai has a vast after-sales network in India, so servicing the Tucson won’t be an issue at all. Talking about safety features, you get 6 airbags, ABS with EBD, Hill Start Assist, Downhill Brake Control, ESC, VSM and Traction Control. 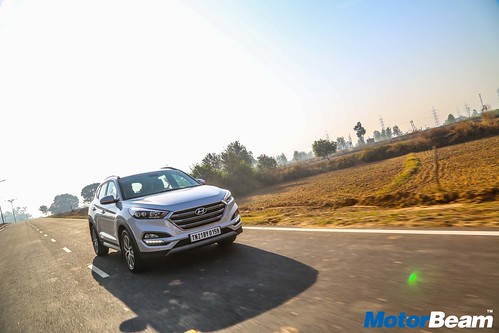 The Hyundai Tucson makes for a good buy as a 2WD, feature-loaded SUV

Verdict – The 2017 Hyundai Tucson is a good package and can be a great choice for someone who wants a 5-seater SUV and doesn’t mind having only 2WD. The Tucson is definitely priced a bit on the costlier side and even though it should be rivalling the Mahindra XUV500 and Honda CR-V, don’t be surprised if people start comparisons with the Ford Endeavour and Toyota Fortuner. The Tucson isn’t an out-and-out proper SUV but more of a soft-roader, and it should definitely be your pick if you want a nice diesel SUV that isn’t as large as the Endeavour or Fortuner. 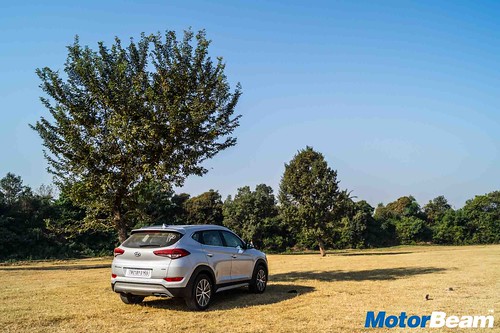 * The Fluidic 2.0 styling works really well
* Interiors have a lot of features on offer
* Suspension has a great set-up
* Brilliant performance from the diesel engine
* Lots of safety equipment on offer
* Very practical on the whole

* Missing features like sunroof, paddle-shifters
* Performance from the petrol engine isn’t all that great
* Steering still lacks feedback and feel
* Ground clearance is a bit too less 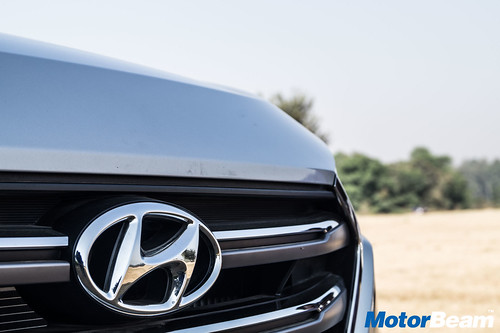 Hyundai has been having a good run in the Indian market

2022 Hyundai Tucson Unveiled With More Tech & Features Than Ever