India isn’t the only country where SUVs are outright favourites. Be it the urban setting or the countryside, the demand for these vehicles is constantly rising. The global demand for this body-style is so high, it is estimated by the year 2020, SUVs will consist of 40% of the market. Keeping in mind the changing consumer preferences, automobile manufacturers are ensuring they have a strong SUV portfolio in their lineup. Ford has just completed 50 years of making SUVs and to give a real feel of what their SUVs are capable off, they invited us to the Philippines to drive a wide range of these vehicles in their own terrain. 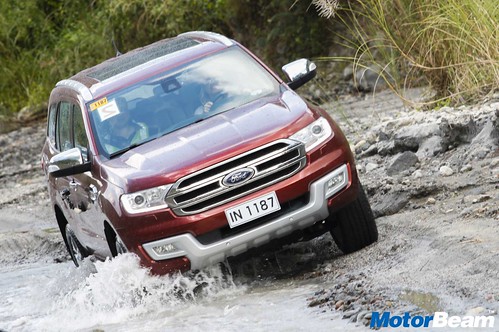 Ford manufacturers a vast range of SUVs. Each of these has a specific role for a specific region or market. At our disposal were four such SUVs. While each of these are classified as SUVs, they differ vastly from each other. We were going to try each one of them in a way they ought to be used. Our lineup consists of the Ford Explorer, Escape (Kuga in certain countries), EcoSport and the Everest (Endeavour in India). 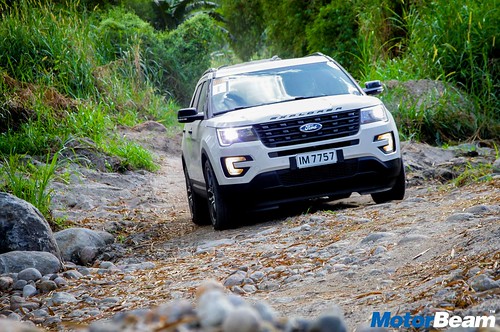 We started out with the Ford Explorer. A large, comfortable and powerful SUV which is primarily used in the American and Australian markets. Our test car was powered by a V6 EcoBoost engine which had more than enough grunt on offer. We set out to the outskirts of the city where the Explorer felt at home in some serious off-road terrain. Like the Endeavour, the Explorer gets ‘Terrain Management System’ which lets you shift into multiple off-road modes on the go. The Explorer fits in for those who want to tame both urban and off-road territory. Ford has no plans to launch this in India currently. 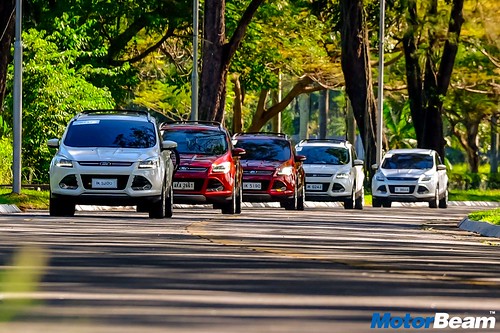 Next up was the Ford Escape (also known as the Ford Kuga in certain markets). The Escape is a mid-size SUV which is aimed at those who want to primarily use it in the city and yet want to escape for some adventure on the weekends. It has a sizeable cabin with sufficient cargo area. Ford was considering this for India a while ago but has dropped plans as per our sources. However, the Kuga aka Escape would be a good option to bridge the big gap which exists between the EcoSport and Endeavour in Ford’s SUV portfolio in India. 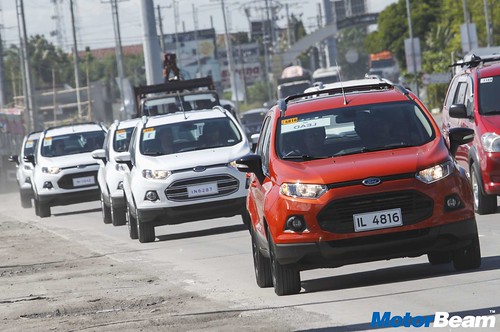 Day two of our drive was interesting as we got to drive the EcoSport and Everest, both of which are sold in India. The EcoSport, known as an urban SUV, is made to tackle city life and how! Compact dimensions make it quite easy to drive and park in crowded conditions. We drove through thick city traffic while we covered two major towns of San Fernando and Angeles. The cabin is comfortable with a lot of versatility in space. The boot size is big enough for the occasional weekend trip or when you have to pick up your relatives from the airport. We sampled this by transporting a whole crate of coconuts to our hotel. 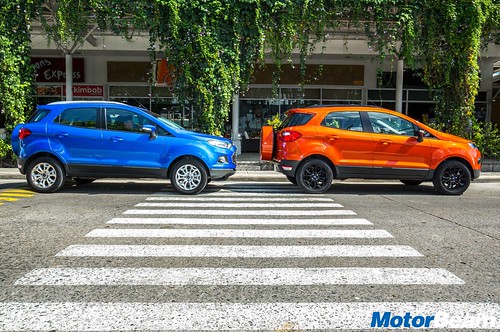 The EcoSport is one of the best-selling compact SUVs in India and we too were driving a car which was, in fact, made in Ford’s Chennai plant in India. However, in this case it was in the left-hand drive configuration. Our EcoSport was powered by the same 1.5-litre gasoline engine which produces 112 PS of power and was mated to a dual-clutch automatic transmission. The high ground clearance and seating position makes it quite apt for our cities which are predominately infested with bad roads. The EcoSport is all about practicality in a compact package. 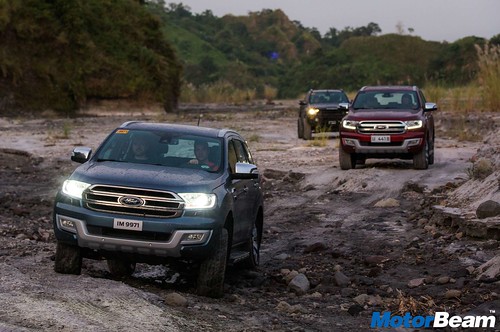 Finally, the car which was the most exciting on this trip. The Endeavour, a genius package and truly adheres to its tagline ‘Engineered for Extraordinary’ and Ford had indeed chosen an extraordinary bit of land to test out this monster. A bit of history before going into details. In the province of Pampanga lies Mount Pinatubo, a volcano which erupted in 1991 spewing out 10 cubic kilometres of volcanic ash. This volcanic ash when mixed with water is called lahar, a mix of pyroclastic material and debris. Situated about 3-4 kilometres from Mount Pinatubo are the lahar beds, a valley which entirely consists of volcanic ash with a river flowing through it. 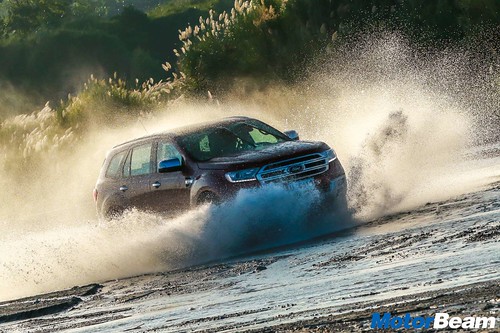 This valley was the precise reason why Ford had us travel all the way to the Philippines. Volcanic ash behaves like sand when it is dry but it completely changes character when it is wet. Unlike wet sand which tends to sink slowly, wet volcanic ash suddenly sinks and one can be totally caught off-guard. To make things more complicated, the flowing water and the rain can completely change conditions in a matter of minutes. What could be a better environment to test out the capability of the Ford Endeavour? 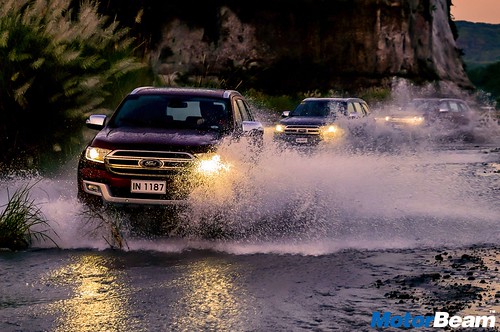 The Endeavour is simply an off-road monster, conquering all terrains

In this treacherous terrain, the Endeavour felt perfectly at home. Terrain Management System made our life easy. We used ‘Sand & Rock’ mode to traverse this beautiful valley, occasionally shifting into 4L and locking the differentials. The Endeavour has nearly perfect approach, rake-over and departure angles ensuring that its underbelly didn’t scrape anything. We also used HDC (Hill Descent Control) while traversing steep gradients. At many places, the ground would just sink unexpectedly but we managed to clear all this without a problem. While this SUV roughed it out, we were cocooned in the comfort of the cabin. Powered by the 3.2-litre engine, the Endeavour delivered punchy performance from the oil burner. 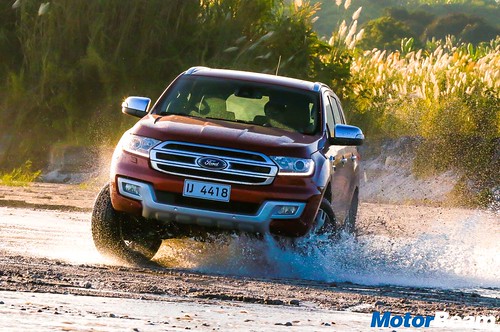 Ford’s SUV Experience was an ideal way for us to live a day in the lives of these SUVs. The four vehicles we drove were very different from each other. Out of these, we only get the EcoSport and Endeavour in India. The EcoSport, yet again, proved to be a perfect companion in the urban setting with its compact dimensions and practicality. The Endeavour managed to tame some extreme conditions with relative ease thereby showcasing the highly capable yet comfortable nature of this mighty off-road machine. 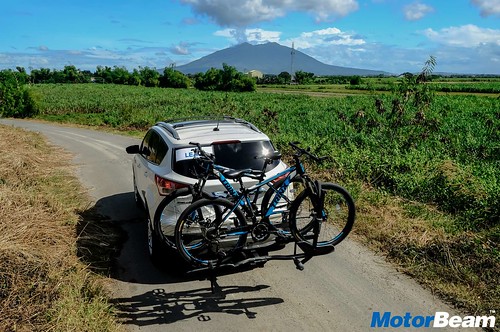 Ford India Enables Over The Counter Sale Of Spares