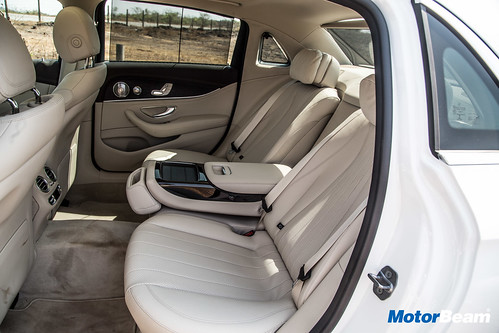 The rear seat takes comfort to a whole new level!

Interiors – While opening the doors to get inside, I am greeted by a familiar feel and look. Jumping in to the rear seat first, what astonishes me is the sheer amount of legroom that the car has. From the rear left seat, you can control the front passenger seat and free up some space for yourself. The rear seat itself is supremely comfy and the soft cushioning really helps matters. The seat back can be reclined by up to 34-degrees and I’m sure you’d want to take a nap here while your chauffeur navigates through traffic. The rear windows come with sunblinds and both of them can be controlled from either of the rear doors. There’s a large centre armrest but shockingly it misses out on audio controls. Another negative is the fact that there are just no cupholders at the rear apart from the bottle holders on the doors. 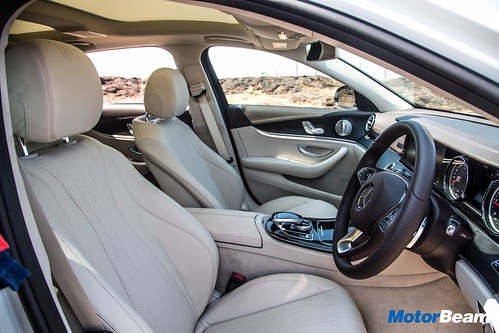 Front seats are excellent too and very supportive

Moving to the front seats, the design and feel is rather sporty but again the seats are really supportive. The seats have electric adjustment with tons of adjustment options. You also get memory function for the seats. Top notch leather has been used all around and you’ll definitely feel special here. The E, however, has a large transmission tunnel which translates into less space for a third passenger at the rear. The boot is again large enough at 540-litres. The boot is well-shaped but the space saver tyre takes up a lot of space since it is strapped in the cargo area. There is a 3-zone climate control system compared to the S-Class which gets a 4-zone unit. 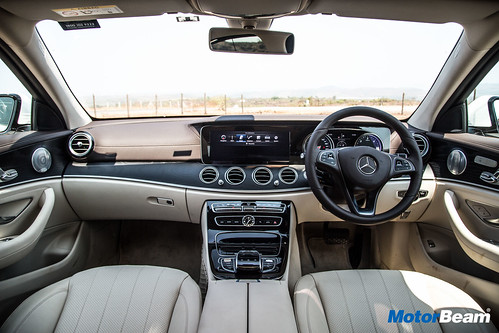 Dashboard has a classy layout similar to the S-Class

The dashboard carries a neat layout. While the global E gets an all-digital instrument cluster, the Indian spec car comes with twin dials in the cluster. The instrument cluster gets a nice screen in the centre and there’s another large 12.3-inch screen for the infotainment system in the centre console. The COMAND system has been upgraded and it gets Apple CarPlay and Android Auto connectivity. However it is still not a touchscreen system. You do get two touch pads on the steering though and once you get the hang of it, the system is pretty intuitive. On the audio front, you get the usual Burmester system with 13-speakers which sounds brilliant. Another useful feature is the 360-degree Park Assist camera. The large panoramic sunroof helps the cabin feel airy.

News highlights of the day include Triumph, Ola, Royal Enfield and Skoda. Triumph - The premium British bike maker is about to launch the Tiger   END_OF_DOCUMENT_TOKEN_TO_BE_REPLACED

Royal Enfield has developed new 350cc platform for future bikes. The coronavirus has let down the auto industry and the buyer sentiment.   END_OF_DOCUMENT_TOKEN_TO_BE_REPLACED

RE to bridge the gap between 350cc and 650cc motorcycles. Royal Enfield is the mid-size king in the domestic market. Their 350cc bikes are   END_OF_DOCUMENT_TOKEN_TO_BE_REPLACED