With the 2017 Pulsar 150, Bajaj has concentrated on mechanical updates

The brand ‘Pulsar’ has been associated with Bajaj Auto since a really long time. First launched in November 2001, the Pulsar 150 brought about a revolution in the country’s performance motorcycling scene by standing against the usual crowd of 80-125cc commuters. Many rivals, even under the same brand, came and went but none could hold a candle to the Pulsar 150’s charm. What’s more? Even after close to 16 years of existence, it manages to outsell every motorcycle in its class clocking sales of over 36,000 units this October. Mind you, there has been no drastic transformation in all these years. For 2017 though, Bajaj has launched a BS4 compliant version of the Pulsar 150 to comply with the Government’s latest norms. The domestic major claims that the changes are more than just superficial, but are they? We take it for a spin to gauge the magnitude of improvements the ‘Definitely Male’ motorcycle has incorporated.

Motor Quest: Started in 1944 as a scooter trading company, Bajaj shifted its focus to motorcycles since 1986. In 2001, the Pulsar 150 and 180 were born. The duo was a saviour for enthusiasts and commanded more respect than the KTMs of today. There have been 9 different Pulsar models on sale till date but the Pulsar 150 remains as strong as ever. Bajaj has previously updated the Pulsar 150 in 2003, 2005, 2006, 2009 and 2010. Capturing the largest stake in the brand’s domestic sales, the Pulsar 150 still holds the crown of their bread and butter model. 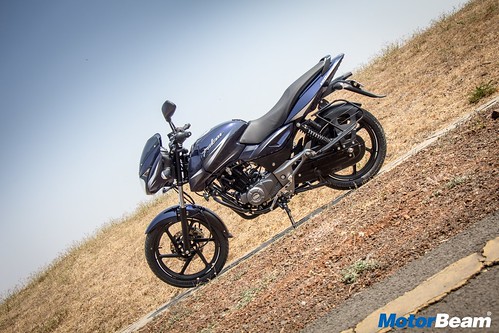 There have been no alterations to the design since literally a decade!

Styling – Even after two or three gazes at the 2017 Pulsar 150, we were hard-pressed to differentiate it from the pre-2017 models. Save for the laser-edged paint scheme, the similarity is so intense that mango people won’t be able to tell it apart from the older Pulsars at all. A sleek visor sits atop the sizable halogen headlight while the sculpted tank is flanked by extending shrouds on either side. The silhouette transitions to a raised rear in a seamless manner and the vertically-laid split LED tailpiece plays its part to sum up the design beautifully. The engine case is now dipped in gunmetal shade and if one goes close enough, there is a SAI (Secondary Air Injection) pipe running around the cylinder head to improve combustion. The side-mounted exhaust looks proportionate while the 6-spoke alloy wheels have been carried forward with the addition of rim stripes. Looking at the overall design package, it is obvious that Bajaj doesn’t want to mess with an already proven formula but that trait is best left to the Japs! 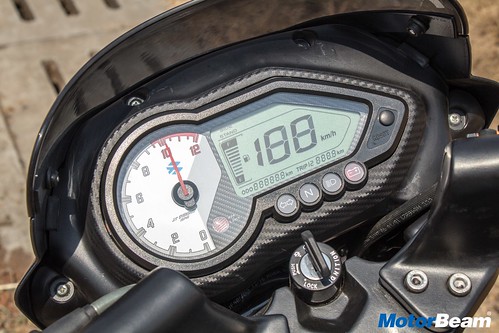 The part-digital instument console does a self-check on startup!

Instrument Cluster and Switchgear – Doing duty on the 2017 Pulsar 150 is the same part-digital instrumentation unit which made its debut on the UGIII Pulsar in 2006. Almost 11 years down the line, things haven’t changed much. Bajaj has generously sprinkled faux carbon fibre finish in and around the console while the tachometer area looks fresh with the use of energetic white background colour. There is an RPM limit light below the tachometer on the right side which lights up as you hit the redline. 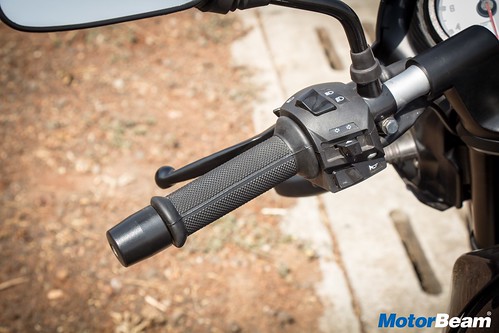 A blue-backlit LCD display dominates the other side and houses a fuel gauge, odometer, speedometer and two trip meters along with other warning signs and malfunction lights. While a clock is sorely missed, well laid-out data ensures that the available information is legible even under direct sunlight. At this price, we couldn’t have asked for more! Switchgear is carried over as it is from the previous version barring the headlamp switch as the Pulsar 150 now gets AHO functionality. Backlit buttons are a joy to use and have a premium feel to them. However, this is not your typical Japanese creation and does have some imperfections when it comes to fit and finish.