India is closely following the global trend of moving toward SUVs. Nobody knows that better than Renault, who has been fairly successful with the Duster. The Duster came at the right time for the French manufacturer and was unrivalled for a long time. There was just one major flaw with the Duster, it just didn’t feel premium at all. The interior quality was very average and didn’t justify the asking price. The Duster further lost the gloss once Hyundai launched the Creta and even though the Creta was more expensive it still found a lot more homes. Now, Renault wants to get back in the SUV game with the Captur, a Duster-platform SUV which Renault claims is more upmarket.

Motor Quest: In global markets, the Renault Captur is based on the Clio but in India it is based on the Duster’s platform to keep costs in check. In Russia, the same car is called Kaptur. Renault states that Captur is actually pronounced as “capture”. 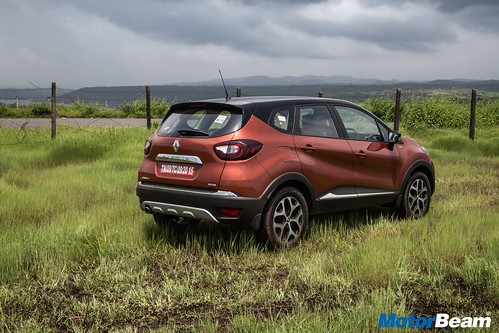 The side profile reveals how big the car is

Exteriors – The biggest USP of the Captur is in the styling. Renault has rendered it more crossover styling than a traditional boxy SUV. However, the SUV elements are still very much there like flared wheel arches, cladding, faux skid plates and segment best ground clearance of 210 mm. And those 17-inch alloy wheels also scream SUV. Renault has equipped the Captur with LED headlamps and tail-lamps. You also get fog lamps with cornering function and the best in all are the LED DRLs and dynamic swipe indicators (at the front) which Renault likes to call floating indicators. 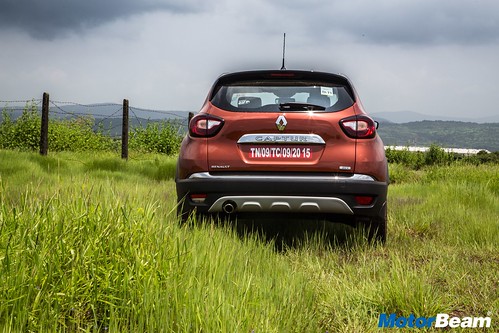 The Captur has a muscular stance with funky styling

The Captur is also the widest and longest car in its segment but that is more due to redesigned bumpers as the track and wheelbase is identical to that of the Duster. The side profile is highlighted by distinct proportions. The shoulder line rises up as it goes backwards and adds to the style quotient. The rear quarter bears a little similarity to the Kwid but that’s ok since it is part of the same family. Chrome has been generously used all around and Renault will be offering a lot of customisation options on the Captur at the dealership level, something similar to what they are already doing with the Kwid.