The Bajaj Avenger 180 which was launched 13 years ago in India was the first cruiser bike to be developed by an Indian company. Of course, there was the Kawasaki Bajaj Eliminator (EL175), a 175cc cruiser but it wasn’t very affordable to customers at that time. And then in 2005, Bajaj developed the Avenger 180 by taking the design cues from the Eliminator. Later on, the 180 was replaced by an upgraded version, the 200, basically with a slightly bigger engine in 2007. Both the 180 and 200’s engines were sourced from the Pulsar bikes of respective engine displacements. The engines were re-tuned to meet cruiser characteristics.

Motor Quest: All the updates of the Avengers have seen few changes in its design but the powertrain remained the same and was sourced from the Pulsar but in a different state of tune. The first generation model was made by taking design cues from the Kawasaki Eliminator which was offered at a premium price tag at that time. The Street 180, Street 220 and Cruise 220 comprise of the current Avenger lineup. 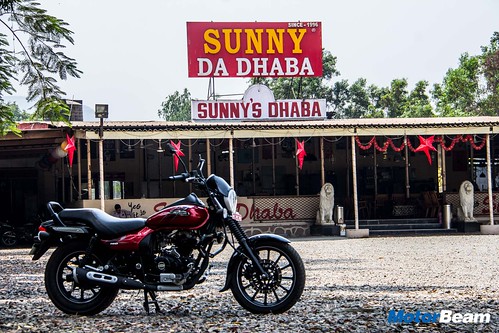 In terms of styling, the Avenger Street 180 looks urban and modern

Styling – The new Avenger Street 180 is now the entry-level cruiser in the Avenger series. It comes in the Street variant only and looks similar to its elder sibling, the Street 220. The motorcycle gets a new skull-shaped headlight with LED DRLs and a smoked visor over it, a new tail-light and a new grab rail, it is a padded grab rail. The seat gets a carbon fibre like seat texture and the fuel tank gets a new and bigger Avenger insignia, while the side panels get Street 180 stickers. The fuel gauge and the tell-tale lights are placed on the fuel tank which are completely out of the rider’s sight. Since it is a Street variant and not the Cruise, it gets a complete blacked-out theme and no chrome bits at all. It looks urban and modern in that all black-theme though. The overall fit and finish of the bike is good. 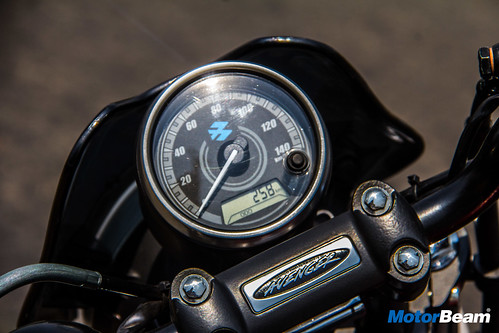 Instrument Cluster and Switchgear – The instrument cluster on this Street 180 is an analogue-digital round pod unit (the 2018 Avenger Street 220 and Cruise 220 get a fully-digital unit). The digital display takes the lower centre space in the pod. It shows odometer and one trip meter. The analogue meter only shows the speedometer with an easy-to-read font. There is also the company’s logo on the analogue meter. As said earlier, the fuel gauge and tell-tale lights are placed on the fuel tank. The RHS features a kill-switch and a self-start button, while the LHS gets the horn, low/high beam switch, indicator and pass-light switch. They are placed in the proper reach of the rider and the plastic quality of them is also good. 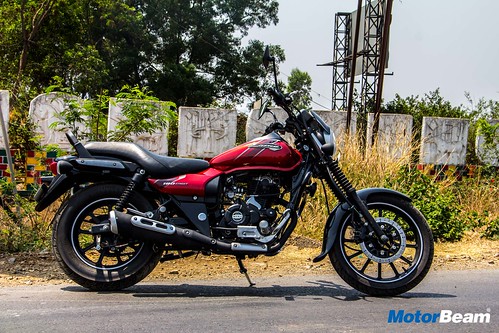 Seating position is low and relaxed

Ergonomics – The Avenger 180 offers a very relaxed and comfortable riding position. Its low-slung design makes it accessible to riders of all heights. The seating triangle has not changed at all. You sit low with stretched out arms and legs. The rider’s seat has a good amount of cushioning and hence it is comfortable. The pillion gets a padded grab-rail which feels good to hold and it also acts like a part-backrest. The rider’s seat is good for city commutes and also for highways. But, if the seat would have been more scooped, it would make the rider sit in it and would make long distance riding more fun with utmost comfort. But the overall ergonomics make the Avenger Street 180 a relaxed cruiser.

Avenger To Get Pulsar 200 NS Engine?