We just love fully-faired motorcycles. But somewhere in between, we lose out on comfort. That is where the category of sports-tourer motorcycles comes into the picture. However, we have had very few of the sports-tourers in the Indian market and it all started with the launch of the Honda CBR250R. Within a few years, we had the first middle-weight by Honda, the CBR650F. With a few changes and updates, the middle-weight CBR is now BS4 compliant and has been reintroduced as the 2018 Honda CBR650F.

Motor Quest: The Honda CBR650F was launched in the year 2015 and made its way on Indian roads. After 3 years, the CBR650F gets an updated engine which is now BS4 compliant and the list of updates are more cosmetic. A new paint job and colour scheme, updated headlight and tweaked suspension complete the list. 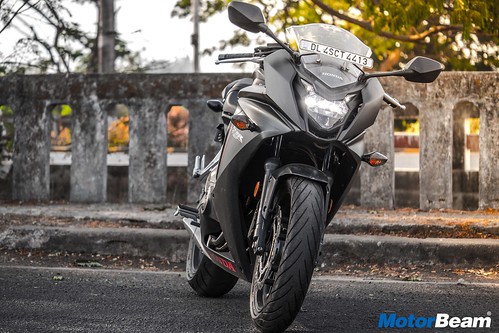 The LED headlight update has made the CBR650F look very aggressive

Styling – The 2018 Honda CBR650F retains the same design language as its predecessor but now comes with minor cosmetic changes and enhanced features. For starters, the most prominent change to the styling comes in the form of this new LED headlamp. Then, you have two new colour schemes – a gunpowder matte black with red graphics and a millennium red with black and white graphics. We personally like the matte colour. Besides, Honda has also given the motorcycle a new exhaust and it has moved slightly behind from its earlier position. Rest of the design elements like 12-spoke alloys with a swirl design, petal disc brakes and the LED tail-light now with clear lens continue as is. Overall, the new colour schemes and the LED headlamp make the CBR650F look fresh but not very significantly. 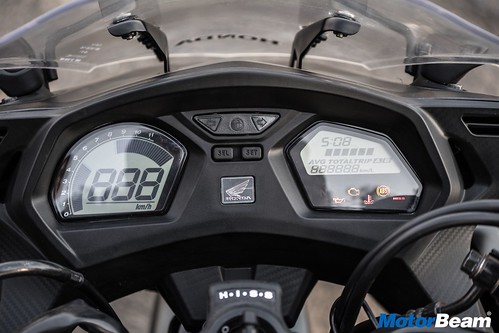 Instrument Cluster and Switchgear – Now this is where the 2018 Honda CBR650F slightly disappoints us. The Japanese automaker has carried over the same twin digital meters (LCD) from the previous model with no changes at all. When launched three years back, this console was something but it’s 2018 now Honda! The console even misses out on a gear position indicator. The switchgear too is carried over but this unit feels solid to use. The RHS houses an engine kill switch and a self-start button while the LHS houses the usual horn, high beam/low beam and indicator switches.

Honda CBR650F To Be Priced At Rs. 8 Lakhs, Launch In July