The Hyundai Creta was first launched in 2015 and over the years Hyundai has given it minor updates which definitely did boost the sales of the compact SUV. Three years post the initial launch, the Korean carmaker has finally given the Creta a comprehensive update. We say comprehensive because the 2018 Creta now gets a host of new features too.

Motor Quest: The Hyundai Creta was first showcased in a concept form at Auto China in Beijing in April 2014 and a year later, the compact SUV was launched in India. The vehicle went on to become the darling of the Indian masses. From inception till end-February 2018, Hyundai has sold 2,48,582 units of the Creta in India. 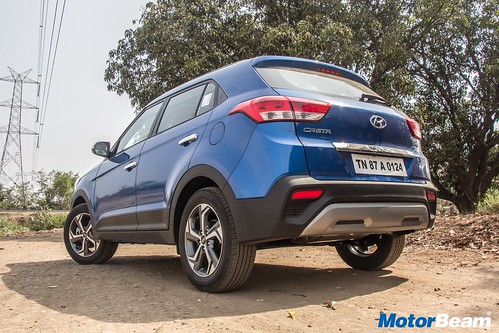 Most of the changes are in the front, the rear gets mild changes

Exteriors – The Hyundai Creta gets a mid-life makeover and in its latest avatar comes across as a more handsome-looking car. Changes are more concentrated towards the front and as a result, you now get the signature cascade effect grille that looks more imposing. The projector headlight setup gets subtle tweaks as well and they no more house the LED DRLs. The lower part of the front bumper gets a faux silver skid plate that adds to the SUV appeal. The fog lamps are a size down now and the LED DRLs have been positioned near them. At the sides, nothing much has changed save for the new 17-inch diamond-cut alloy wheels which have a new design. The rear looks identical to the pre-facelifted car except for the shark-fin antenna and the silver skid plate. The compact SUV is now available in two new colours – Passion Orange and Marina Blue. 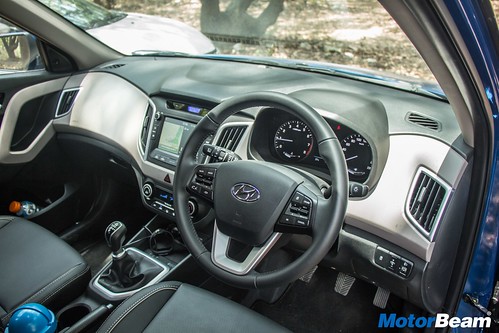 The Creta now gets a longer list of features

Interiors – The interiors of the 2018 Hyundai Creta remain vastly unchanged. The dual-tone dashboard houses an identical 3-spoke multi-function steering wheel and an instrument cluster with a MID display. The 7-inch touchscreen AVN system now gets a new software and features Apple CarPlay, Android Auto and MirrorLink. The facelifted Hyundai Creta gets a host of new features like an electric sunroof, 6-way power adjustable driver’s seat, wireless charger, cruise control and a wearable fitness band called Smart Key Band. The wearable band controls a host of functions as well apart from acting as a key during your fitness routines. Other features on offer are steering mounted audio controls, automatic climate control, push-button start, ARKAMYS sound system, rear parking sensors with camera and rear AC vents. The seat comfort and the space on offer at the rear remain identical to the previous model.