Few cars are as multifaceted as the BMW 3-Series. From being a proper premium sedan to being a driver’s delight, the 3-Series has always stood out as an exceptional sporting saloon. It pioneered a segment and mastered it with every new generation. The 7th generation model comes at a time when the competition is fierce and the automotive scene is shifting towards green power and higher dependence on technology. The competition is not only from other compact sedans like the Mercedes-Benz C-Class but also from a range of big and small SUVs at a similar price point. In a day and age when all brands are softening their products to favour fuel-economy and tech-savviness, BMW is making bold claims of the 3-Series’ dynamic prowess. Does the 3-Series have what it takes to stand out from the diverse crowd and more importantly can the new model redefine the sports-sedan segment once again? We hit the road to find out.

Motor Quest: The 3-Series name is a little over 40 years old and in the last 6 generations, it has been a massive success story. Over 15 million units have been sold and the model currently accounts for 30% of all BMW sales. This bread and butter model started its life as a 2-door in 1975 but a 4-door sedan version followed by an estate, coupe, and convertible body types were added soon after. It invented the segment of compact sedans aimed at the driver. The concept became so popular, it prompted other brands to join the race. The 3-Series stood its ground and perfected the formula with every generation. It has impressed several critics and has won many awards till date. The 3-Series came to India in 2007. The sedan enjoys a decent fan following in our country with many people looking at it as an entry-point into the BMW range. The 7th generation model comes here soon after its global launch. Codenamed as G20, the new sedan is based on a brand new platform and promises to be bigger, more efficient, more luxurious, more advanced and all this without compromising on the driving thrills one associates with the 3-Series. 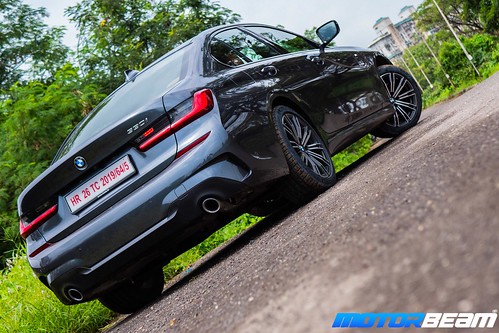 The new 3-series has a striking and aggresive look

Exteriors – The new 3-Series looks like a compact sedan it ought to. The long bonnet and stubby rear result in a well-proportioned design. The headlights have a kink in them at the centre which merges in the bumper. This divides the headlight piece into two, giving it a distinct appearance. The headlights seem to be inspired from the E46 3-Series. The sculpted bumpers and the creases on the bonnet make the front look quite imposing. The typical low-slung profile makes the 3-Series quite sporty. 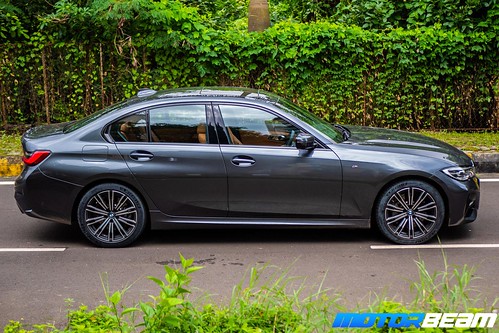 The design is well-balanced along with snazzy alloys

The side has a sharp crease in the bottom and a prominent line in the lower half. Both the elements play well with reflections, aiding to the athletic look of the 3-Series. The sedan comes with Sport, Luxury and M-Sport trim options, each with their own individual design features. The Sport Line is relatively basic, the Luxury Line adds more chrome and an elegant set of 17-inch alloys while the M-Sport adopts a racier approach with sharper bumpers and more attractive 18-inch wheels. The rear is minimalistic in comparison but the squarish taillights with angular L-shaped LEDs definitely look the part. In conclusion, we think the 3-Series is one of the better-looking sedans in the market today.

Renault wants to go all guns blazing in the Indian market by creating new segments. Renault launched the Triber in 2019 and this 7-seater   END_OF_DOCUMENT_TOKEN_TO_BE_REPLACED