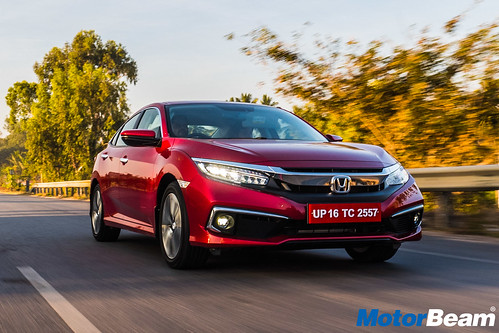 Performance – Honda is offering the Civic in India with two engine options. Starting with the petrol, it’s the 1.8-litre unit that outputs 141 HP and 174 Nm. The engine is smooth and refined but the gearbox choice plays spoilsport as far as enthusiasm goes because it’s slow to respond, has the rubber band effect in the top-end and overall performance isn’t impressive for a Civic. The bottom-end isn’t strong and the more you rev the motor, the more it rewards you with progress. Redline comes in at 6500 RPM and the Civic petrol does have a good top-end, making a sporty snarl past 5000 RPM. A manual gearbox would have been really welcome in the Civic petrol as the engine is a gem but the CVT box doesn’t let one exploit the best out of this VTEC mill. 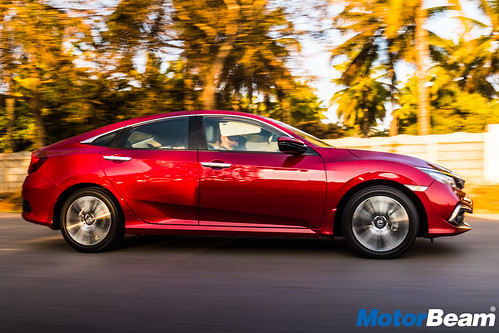 Coming to the better engine on offer on the Honda Civic, it happens to be the 1.6-litre i-DTEC unit that also powers the CR-V but unlike the crossover, the Civic uses a 6-speed manual gearbox and not a 9-speed automatic. The oil burner lacks refinement, is vocal, more so as you rev it past the mid-range. It does excel in drivability with good low-end punch, turbo lag being very well contained. Top-end is lacking but the engine is free revving and reaches 4800 RPM on the tachometer. The 6-speed gearbox is smooth shifting and the clutch is light too. 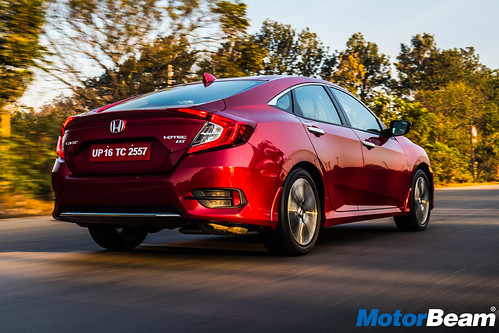 The ECON mode helps to increase the fuel economy

The Honda Civic is a frugal car, both engines get the option of an ECON mode for reducing fuel consumption and the ARAI rated mileage is a stellar 26.8 km/l for the diesel, the petrol manages 16.5 km/l. The cluster also changes the light from green to white when you get hard on the accelerator, thereby signifying when you are driving frugally. The Civic is equipped with low rolling resistance tyres and a low coefficient of drag which helps it be so frugal. That said, the gearbox should have been swapped with the petrol getting a manual and the diesel getting an automatic! 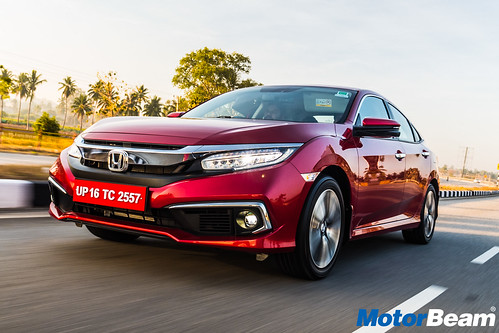 The ride quality is average and body roll is well contained

Driving Dynamics – Underpinned by the same platform that is also used on the CR-V and Accord, the Honda Civic is 22 kgs lighter and 25% more rigid than its predecessor. The suspension is on the firm side and handling is great, with body roll very well contained. It’s eager to dart into corners and inspires confidence too (thanks to the low seat). What is really a joy is the steering, it’s light at low speeds and weighs up nicely at high speeds, giving an abundance of feel and feedback. 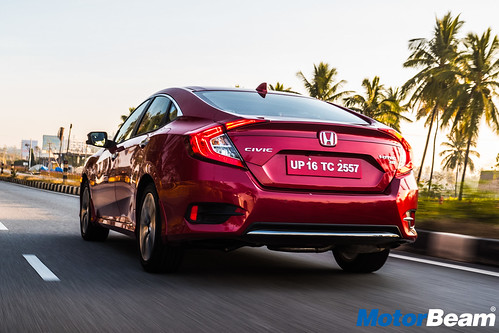 The brakes are good but the tyres lack grip

The stiffness of the suspension means that over bad roads, the Civic isn’t very compliant although, for the most part, ride comfort is good. The vehicle remains stable at high speeds and road noise isn’t much, you can hear the diesel engine clearly though. The Yokohama tyres are low DB ones and although silent, don’t offer the most grip, the same can be felt in the diesel due to the torquey motor which loves to spin the front wheels. The diesel Civic is slightly front heavy (it weighs around 55 kgs more than the petrol model) and is more prone to understeer too. The brakes offer good stopping power with the rear discs helping in quickly shedding speed. Honda has increased the ground clearance by 20 mm at the front and 15 mm at the rear, the car didn’t scrape on any speed breaker. At 126 mm (laden GC), the Civic has a 6 mm higher clearance.