The new Honda Civic gets a bold new design, feature-loaded interiors and both petrol and diesel engine options

There was a time when Honda had truly understood the demands of the premium car market in India and had aligned their products accordingly. The Civic was the crowning glory in Honda India’s line-up. It had everything one wanted from a mid-size sedan and it became the de-facto choice in the segment. But as years flew by, the market conditions became unfavourable. The petrol prices shot high, the Rupee was falling in front of Yen and the smaller SUVs like the Renault Duster were being introduced in the market. With changing demographics Honda began concentrating on cheaper cars which began diluting the premium image of the company. A few years back, Honda admitted that it had to go more premium and one of the ways to do that was to re-launch the Civic. 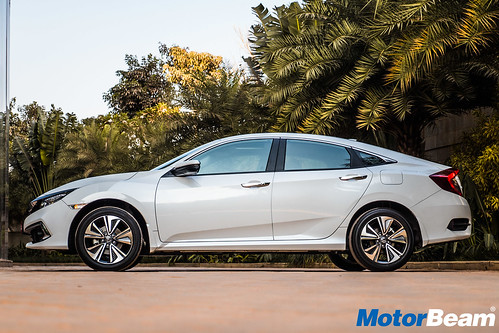 The Civic nameplate is returning to India after 7 years

The new Civic is not going to have it as easy as the previous car. The competition is intense and the market is flooded with SUVs which are cheaper and offer more. Luckily, for the Civic many Honda fans still remember the car and the Civic name has a considerable fan-following. The new Civic also comes with what it was sorely missing, a diesel engine to widen its appeal. Will it have the same charm as the older car and can it make the shrinking D-segment popular once again? Let’s find out.

Motor Quest: The Civic is an old nameplate being around since 1972. The Civic was launched in India in 2006 and it became an instant sales hit. Upon retrospection, it wasn’t hard to see why. The Civic had the cracking formula of terrific looks, superbly well-appointed interiors, smooth and rev happy petrol motor and that Honda badge which many considered as prestigious. The Civic, in its best year was selling around 2500 units a month – an unprecedented number in the segment. But eventually, due to various reasons, it had to be phased out and Honda began concentrating on cheaper cars. But such was the impact of the previous one, that Honda had to get it back. This time they have worked on the key shortcoming of the previous Civic and that is the lack of a diesel engine. Honda is hoping to recreate the magic with the new generation. 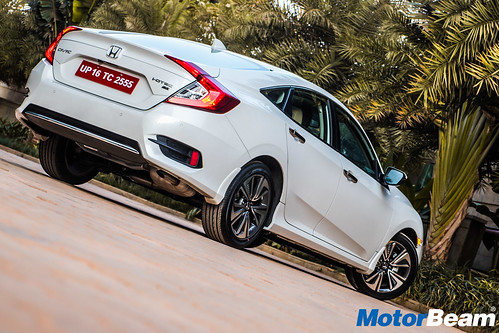 The Civic’s design is unique and cutting-edge

Exteriors – The 10th-generation Honda Civic comes to India in the form of a mid-cycle facelift and straight away it looks striking. The front has that in-your-face look that will go well with the Indians. The bold chrome grille is surely the highlight occupying the majority of the front portion. The beautifully detailed headlights and sharp contours for the foglight only up the style quotient factor in the low slung design, the Civic looks fresh and sporty. 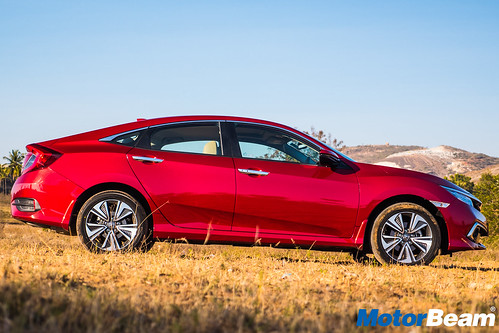 The Honda Civic looks smart, elegant and has a lot of presence on the road

Attention to detail continues on the side where the body looks perfectly proportioned with lines flowing along seamlessly. The five-spoke 17-inch alloys look fitting to a premium car like the Civic and the glossy chrome-finished handle-bars add a dose of flair. Where the front is sporty, the side comes across as more elegant and that is just fine. What is very noticeable is the exceptionally well-executed fast-back sloping roof design which makes the Civic stand out instantly in the segment. At the back, while the boot is stubby, it seldom looks out of place. However, the boomerang taillamp looks a bit large but has an interesting design nonetheless. Unlike the headlights, the taillights are only partially LED. The bumpers and number-plate housings are well designed and especially from the rear three-quarters, the Civic looks very athletic. We can say, to an extent, that the new Civic has the magic of the old car in the style department. (The lower trims miss out on LEDs but get projector lamps and 16-inch alloys).