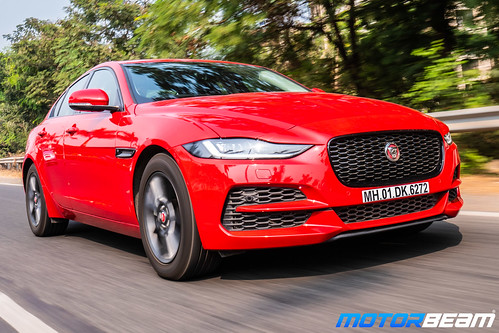 The Jaguar XE shares its refined petrol engine with the Velar

Performance – The Jaguar XE is offered with 2 engine options with the petrol model now getting only a single state of tune (the earlier different state of tune for different variants didn’t make much sense anyway). Known as the P250, the XE petrol belts out 250 PS of power and 365 Nm of torque from a low 1500 RPM, peaking at 4000 RPM, giving a very wide torque band, resulting in linear performance and great drivability. Turbo lag is well contained and the motor feels eager throughout the rev range, taking 6.5 seconds to reach the ton (0.6 seconds faster than the Velar and 0.7 seconds slower than the BMW 330i). 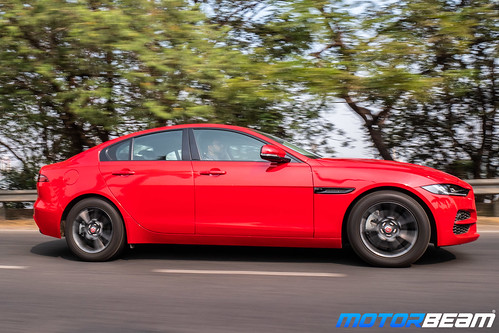 The same engine is also used in the Velar but doesn’t feel all that sprightly, something to do with the weight as well since the XE tips the scales at 200 kgs less. The engine is sweet-sounding and really screams to the redline which comes under 6500 RPM with usual shifts happening around 6000 RPM. However, take manual control of the gears using the steering mounted paddles and the motor will rev close to 7000 RPM in first gear. 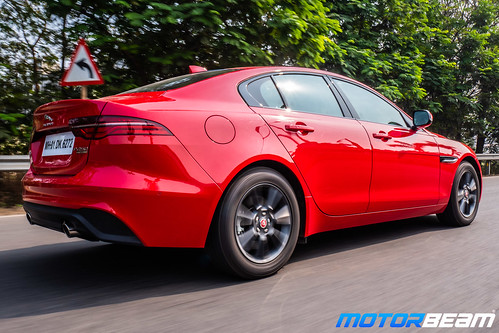 The gearbox has a tendency to unexpectedly downshift in city traffic

The 8-speed gearbox is quick enough with shifts but a bit too optimistic at times, giving an additional downshift in slow-moving conditions. There is a Sports mode for the gearbox which alters the speed of shifts while there are 4 driving modes on offer – Winter, Eco, Comfort and Dynamic, these alter the engine, steering and air condition. Fuel economy is between 8 to 12 km/l and the petrol model has a bigger fuel tank capacity at 61.7-litres against the diesel’s 56-litres. And yes, both the engines are now BS6 compliant! 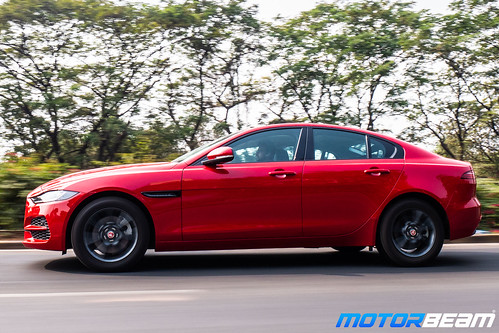 Driving Dynamics – The Jaguar XE made a definite mark in the segment by offering great levels of dynamism. That hasn’t changed with the facelift and it continues to be one of the best cars in terms of ride and handling balance. Weight has been kept in check with the use of aluminium, near to 50:50 weight distribution has been achieved too and while the platform is the same as the F-Pace and the Velar, the big difference lies in the overall feel of driving this Jag, it’s fab! 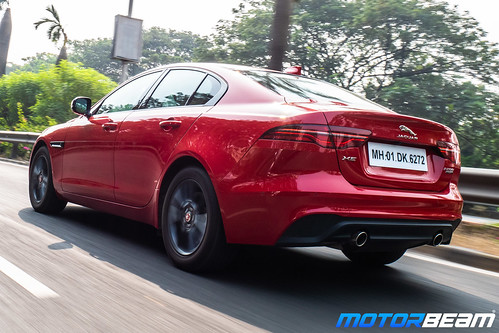 Thanks to the near 50:50 weight distribution, the Jaguar XE has an outstanding ride and handling balance

Body roll is very well contained and Jaguar’s first attempt at an electric power steering is nothing short of a joy to use, heavy at lower speeds but weighs up brilliantly at higher speeds although it’s not a very quick steering but feels a bit like a hydraulic unit. The car uses an integral link rear suspension which has separate components to tackle lateral and longitudinal forces, the ride quality is brilliant, the car absorbs almost everything in its stride without a hiccup and rides like a bigger sedan. High-speed stability is excellent and so are the brakes. The ground clearance of 125 mm is ample as the baby Jag doesn’t scrape on speed-breakers.