The XE has got a lot of attention from Jaguar and it shows, a very important car for the brand

When an individual wants to announce their arrival, one of the first step is to buy a luxury car. Considering they have just started making a fortune, it is the entry level luxury sedans which they look at. The volumes make this segment very attractive for all the luxury brands. Now, it is Jaguar who have understood that this segment needs to be catered to and catered well. This has led to the introduction of the Jaguar XE, the entry level sedan from the British marquee. So what all has Jaguar done to ensure that the car does well in the market?

Motor Quest: Launched in 2014 at the Geneva Motor Show, the Jaguar XE grabbed a lot of eyeballs. Being the most affordable car in the portfolio, it has a lot riding on its shoulders. While sales begun in Europe last year, the car came to India this year. Available globally with a choice of petrol and diesel engines, it currently comes only with a petrol option in India. 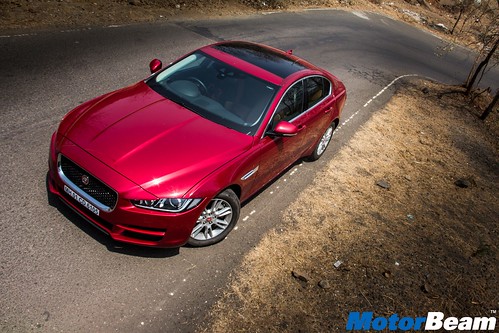 The Jaguar XE is a smart looking sedan, not too flamboyant

Exteriors – When you look at the car for the first time, the word that comes to your mind is – understated. Jaguar has been very conservative with the design approach and it is nowhere as radical as the F-Type or the other concepts that they have. The front gets the family look resembling the elder siblings, the XF and XJ which isn’t a bad thing. Move on to the side profile and you notice the sloping coupe like roofline which adds a touch of sportiness to the package. The rear is very minimalist too with only the tail lights being the attention grabbers. 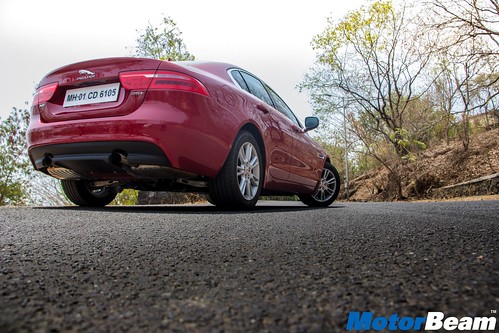 The J-blade LED DRLs coupled with the power bulge on the bonnet lend an aggressive stance to the front. On the sides, the 17-inch alloys look rather plain jane and Jaguar could have offered a size larger or at least a different design for the top-end trim. The attention seeking tail lights have been designed to mimic the ones seen on the F-Type. Luckily, Jaguar hasn’t splattered the car with chrome and it has been applied very tastefully all around the car which lends it an upmarket look. The design would offend none but it wouldn’t make the Jaguar XE win any design awards either. 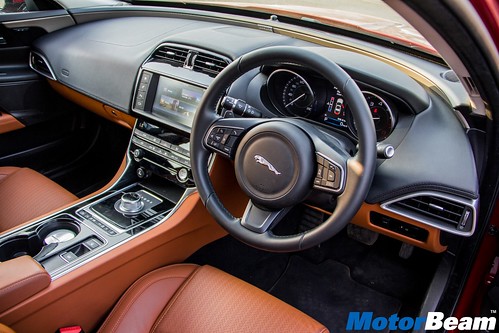 The interiors are well appointed and overall quality is good

Interiors – The sporty and understated design philosophy of the exterior has trickled down to the interiors as well. It shares some beautiful elements with the big daddy XJ like the ‘Riva Loop’ which is a continuous band of trim running around the dashboard and connecting the front doors. The dashboard itself sports a clean design with the touchscreen infotainment system taking centre stage. The AC controls are neatly laid out with buttons being of adequate size. Speaking of buttons, it is slightly disappointing to hear a click sound from many buttons. It robs away some of the premium experience and Jaguar could have used better buttons. 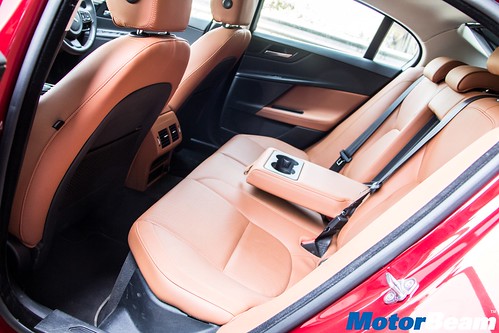 The interiors feel luxurious and offer great comfort to the passengers

The overall interior quality is very good in the Jaguar XE. The front seats offer excellent support and are well cushioned. The rear seat is a little tight in terms of headroom for tall passenger owing to the sloping roofline but is otherwise very comfortable. The under thigh support and legroom is good for any passenger below 5’10”. However, a third passenger would not be comfortable due to the tall transmission tunnel and protruding rear AC vents. 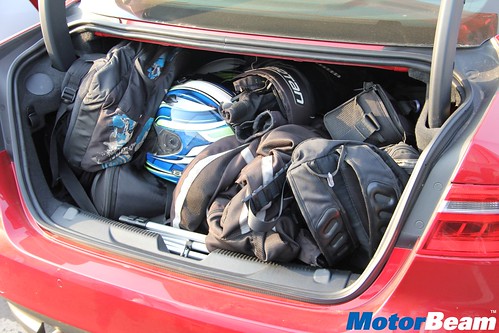 The boot gulps in a lot of luggage, spare wheel under the floor

The boot is very practical due to its flat and wide floor. The spare tyre is tucked away under the floor unlike the Mercedes C-Class and BMW 3-Series which makes all the boot space usable. The infotainment system is much improved over the previous iterations seen in other Jaguar cars but it still isn’t the best in trade. A very neat party trick in the Jaguar XE is the 360 degree camera which is the best we have ever seen in a car. It works very well to show the complete surroundings of the car and makes parking in tight spaces a breeze. The Meridian sound system will satisfy the audiophile in you by providing good music quality. 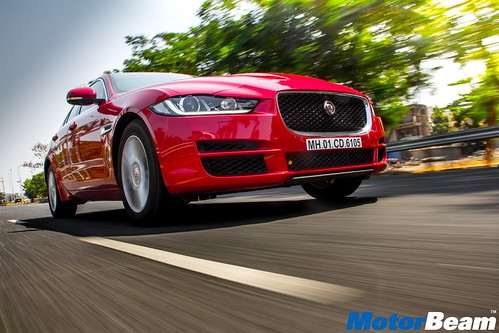 Performance – The Jaguar XE has been launched with just a petrol engine in India for now. The two trim levels get different tune and we had the higher tune variant. The 2.0-litre Ford sourced engine produces 237 BHP of power and 340 Nm of torque. The figures translate into excellent performance which is further assisted by the brilliant 8-speed ZF gearbox. The gearshifts are extremely smooth and most of the times, one wouldn’t even realise when the gear changes. When using paddles, the gearbox holds the revs and doesn’t upshift automatically on hitting the redline. This lets the driver have a lot of fun in ghat sections. 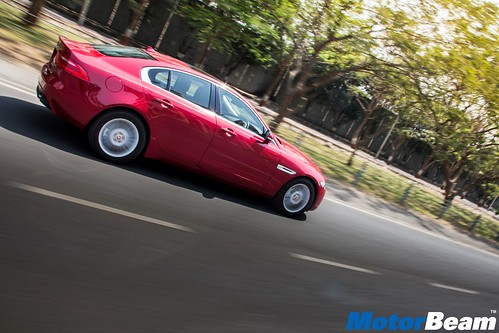 The Jaguar XE gets four driving modes – Eco, Normal, Dynamic and Winter. The character of the car is very different in the four. The Eco mode dulls the throttle response and the gearbox upshifts very quickly to maximise fuel efficiency. The Normal mode is the best balance of power and comfort with the steering being reasonably light. The Dynamic mode is best reserved for those occasions when you are in the mood for a bit of fun. The Winter mode is particularly useful in snow conditions and it makes the car start of in 2nd gear to control the power transmitted to the rear wheels. 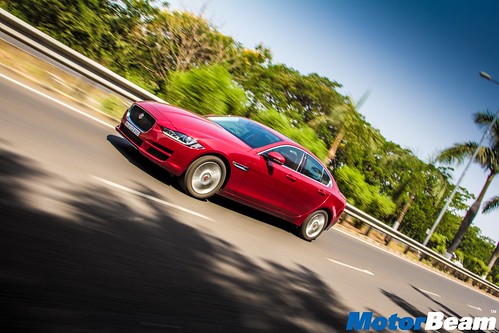 The Jaguar XE has the best driving dynamics in its segment

Driving Dynamics – Before the Jaguar XE came, it was the BMW 3-Series which had the crown for being the most fun to drive sedan in its segment whereas the Mercedes C-Class has the tag of being the most comfortable. The British manufacturer tried to go one up on both and has been able to achieve the right blend of sportiness and comfort. The aluminium structure makes the car light weight and it shows when you drive. It feels much lighter when you take it around corners and tackles them very well. The suspension has been tuned in such a way that it doesn’t compromise on comfort but yet is stiff enough to make the drive involving. 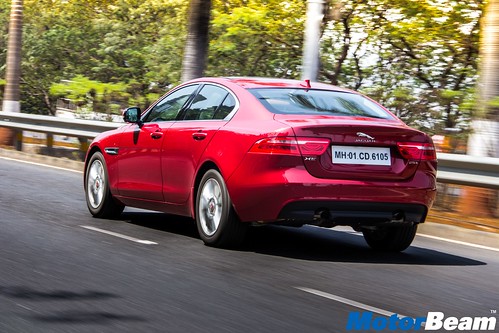 The steering is an electric unit but it weight up very well with speeds. The weight distribution is very close to 50:50 at the front and rear which takes the driving feel a few notches higher. The suspension deserves a special mention as it does the job very well. Undulations and small bumps aren’t felt by the passengers and there is no bounciness even at high speeds. The high profile tyres also contribute to the comfort levels by compromising a bit on looks. Braking duties are performed well by the brakes which do the job of shedding speed remarkably well. All the factors combined give the driver the confidence to push the XE harder. 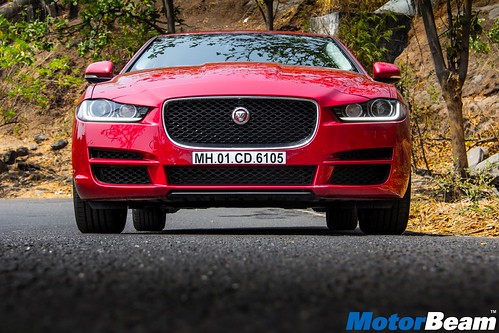 In terms of sales and service network, Jaguar lags behind arch rivals

Safety and After Sales Service – The Jaguar XE got the highest safety rating, 5 star in the Euro NCAP test. It comes with the usual package of safety features which are more or less standard across the segment. The lightweight aluminium structure of the car is supported by high strength steel in impact areas which gives solidity to the car. The sales and service network of Jaguar is limited when compared to the German trio but they are expanding steadily. Yes, the current Jaguar owners haven’t been happy with the service quality but the Tata owned brand is committed towards customer satisfaction. 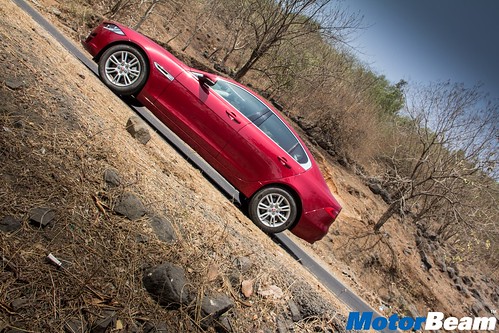 Verdict – Jaguar is the last one to introduce an entry-level sedan amongst its peers but it has used its time very well. The XE is an excellent package combining practicality, sportiness and comfort. The engine combined with the gearbox and driving dynamics will ensure that the enthusiast in you is satisfied whereas the comfort level will ensure that the other passengers are comfortable too. It has truly shaken up the segment with the only fly in the ointment being the high price. It is priced at a quite a premium over the Mercedes C200 but we would say it is well worth the premium. The British brand has indeed succeeded in making the baby Jag the best driver’s sedan in its segment. 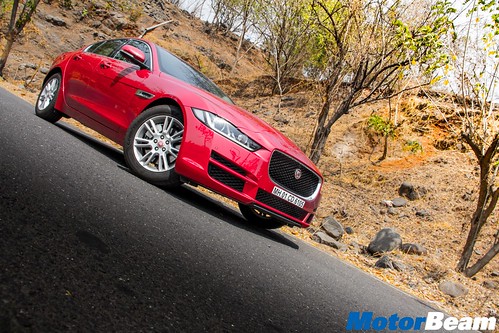 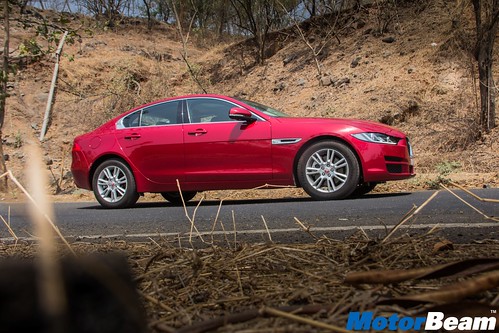 Only petrol variants available for now, diesel ones coming soon 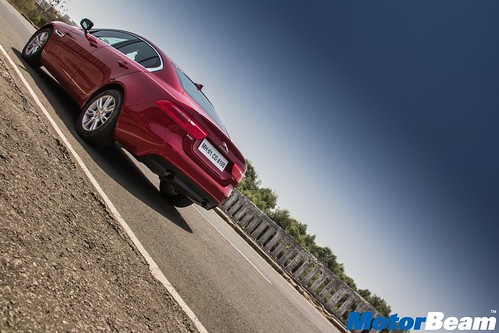 “The Jaguar XE is a pleasing surprise in the sea of German sedans in this segment. Being the last to the segment has played to Jaguar’s advantage as it has been able to study its rivals thoroughly and come out with a product which excels on most of the fronts. The ride quality was the big surprise considering how good the XE handles. The stand-out point of our test car was without doubt the performance which is supremely fun, the entry-level British cat being quick with a nice exhaust note.” – Faisal Khan, Editor, MotorBeam.
“It isn’t easy to compete in a segment where the Germans have a strong foothold. When the XE was launched I wasn’t quite sure if it will be able to give the German trio a run for their money but after driving it my perception has completely changed. Full marks to Jaguar for developing a class act. I love the XE for its distinctive styling, cabin layout and best of all, its performance and dynamics. It also adds a touch of exclusivity for those planning to buy a sedan in this segment.” – Javeid Khan, Deputy Editor, MotorBeam.
“When the Jaguar XE was launched, it was touted to be the best handling car in its segment. Naturally, my expectations from the car were really high and I am glad it fulfilled those. The supremely comfortable driver seat lets you push the car hard into corners. Try to do a high speed run and the very well set up suspension ensures that small bumps and undulations do not unsettle the car at all. The last to join the party, the XE has set the benchmark very high for the next generation BMW 3-Series.” – Aman Sancheti, Road Tester, MotorBeam.