The Jaguar F-Type is loud, fast, sharp, sleek and fun, it’s the stuff dreams are made of.

Supercars, they can often be called overhyped because there is just so much talk about them, yet we hardly see them on our roads. The problem is, not all supercars are usable on a day to day basis which really hampers their sales. But used frequently or not, none of us motoring enthusiasts can deny the fact that in our childhood, we have always had a red coloured sports car on one of our walls. Times change but the desirability of these go-fast yet appealing machines never subsides. Even today, all of us still think and dream of sports cars. One of the most sort after and much applauded sports car of all time is the Jaguar E-Type, a car so good in most ways that its successor had to meet a lot of expectations. 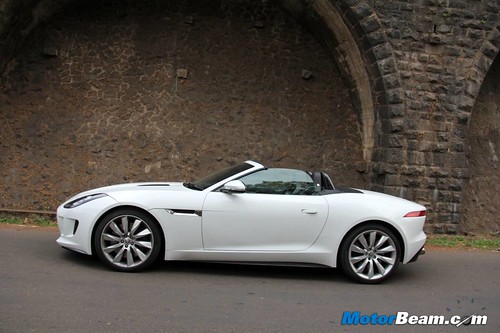 Jaguar’s brilliant F-Type has surpassed all that people desired from it, the British automaker outdoing itself by bringing in a car which is so well engineered that people drew comparisons with Porsches, a company which has been mastering sports cars day-in and day-out over the past 40 years. The F-Type has already got our thumbs up, we had put it through our comprehensive road test last year in Spain and were mighty impressed with how Jaguar has put together one marvel of a supercar. This time around, we drove the F-Type on Indian roads to see how it is to live with a supercar in our country. 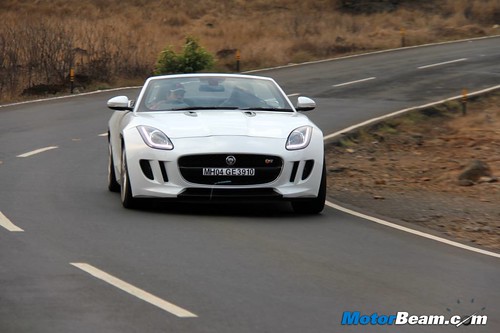 Smoking hot this, the F-Type is beauty in motion, quicker than any cat

The Jaguar F-Type arrived to us at night and that’s probably the best time to enjoy a supercar in our conditions. Roof down and an empty stretch of road ahead was enough to make sure I wouldn’t sleep at night, with the melody from those quad exhausts ringing in my ears. The F-Type is one of the best sounding cars I have ever driven and that is a huge compliment as the past few months has seen me pilot accomplished cars including a slew of AMGs. Still, no AMG can match the exhaust note of an F-Type and that itself is a huge applaud for the F. Turn on the flagship Jag and it rumbles to life with a ferocious thump of sorts, waking up the entire neighbourhood. But before I take you through the experience of driving a car which can nudge past 100 km/hr from standstill in a mere 4.3 seconds, let’s dwell a bit into the finer details. 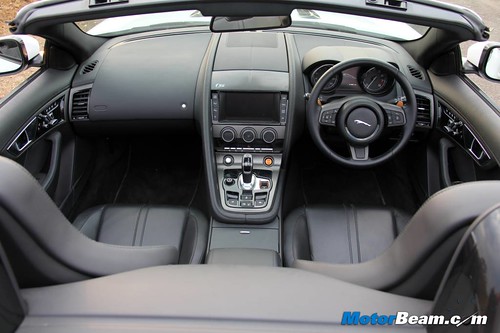 The F-Type’s cabin is one masterpiece, it’s such a fine blend of style, sportiness and luxury that you can sit all day long, simply admiring the cabin. Everything is just so thoughtfully executed, right from the chunky three-spoke steering wheel to the driver focussed centre console. The materials used are top notch sensational, everything exuding a feel of premium-ness. The centre console has buttons neatly placed on it, easy to operate on the move and the buttons for the AC controls are inspired from a fighter jet. Party tricks? There are two. To get in, you unlock the car and out pop the door handles. Turn on the AC and the centre AC vents pop up, neat stuff indeed. 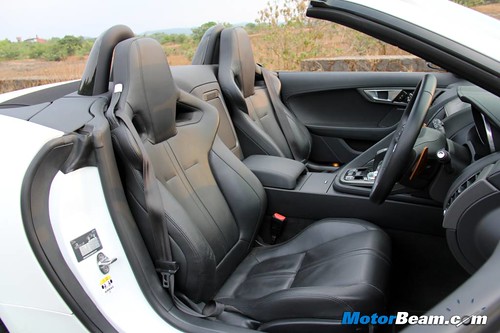 Then there are those seats, immensely comfortable with terrific bolstering, buttons to adjust them are placed on the doors, right in sight. You can sit for hours in these, yet not sniff a hint of fatigue. Of course, the big part of the F-Type Convertible experience is open top motoring, all it takes is 12 seconds and voila, you can get wind in your hair. 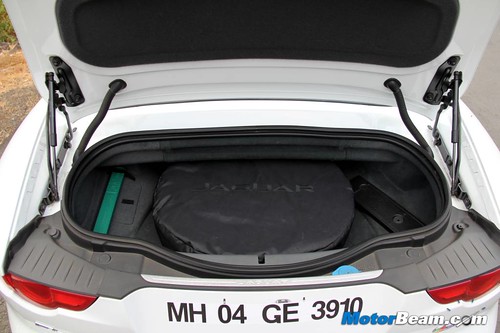 Not a very practical boot, space saver tyre occupies most of the 200 litres

Yet, travelling anywhere would mean taking some luggage, the F-Type like any other supercar, doesn’t really have a boot to boast off. There are small yet significant cubby holes inside the cabin but in the trunk, there is hardly any space, more so if you have the spare wheel lying there. 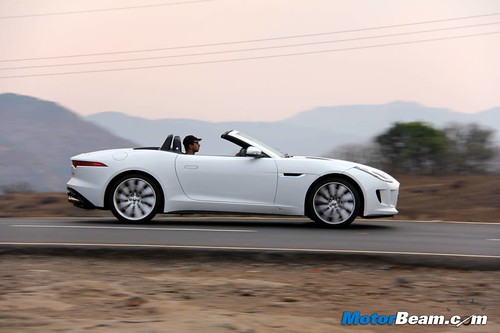 Wind in your hair and aural bliss in your ears, the F-Type excels at both

Since I wanted to enjoy the F-Type with its roof down, it was amply clear that an early morning drive is what’s best with this Jag. For the first time in history, I beat my alarm clock, rising up a full hour before it would ring in an attempt to wake me up. By the time the alarm clock rang at 5 AM, I was already long gone, relishing in the fun of the 5.0-litre Supercharged V8 on the Mumbai-Pune expressway. This Jaguar has some serious performance, with a sound track to match at every RPM. 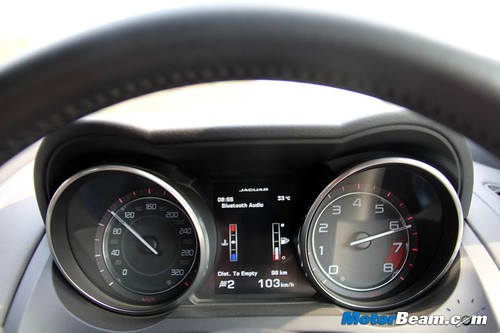 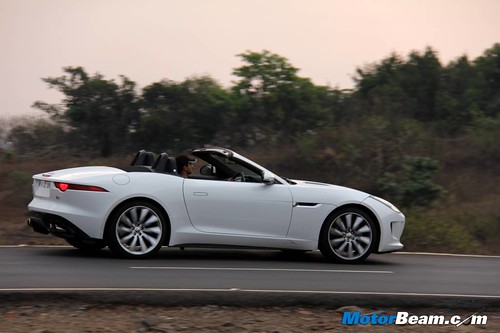 The F-Type offers as much fun slowing down, the exhaust cracks and burbles

The crazy performance is amplified by the way the F-Type cracks, pops and burbles on downshifts, blipping the throttle. To best enjoy the aural bliss, one needs to find a tunnel, the Mumbai-Pune expressway has plenty of them. Enter a tunnel at low speed, downshift to first and give it the beans, the effect is nothing short of nirvana, the F-Type bringing the tunnel to life with an exhaust echo which is so loud yet serene that I could do this all day long, yet I chose not to, because I couldn’t wait to push this aluminium bodied machine through the twisties Lonavala’s Aamby Valley had to offer. 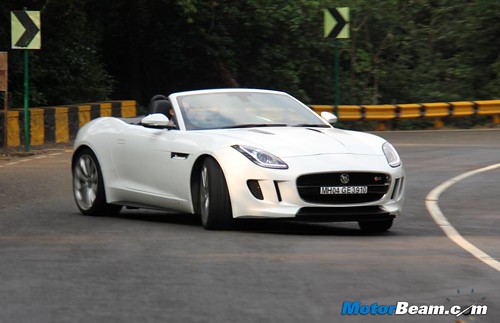 DSC off and the F-Type is quite tail happy, drifting in style and speed

So much of power going to the rear wheels isn’t very safe as oversteer is a given. But Jaguar engineers have done a fantastic job of balancing the car through the corners, in spite of you being much quicker through the curves then you should be. The handling is sharp, precise and the F-Type is eager to dart into every turn with an eagerness that fits its sporty character well. It simply remains glued to the tarmac, some hint of oversteer persists but the electronics keep intervening to cancel them out. 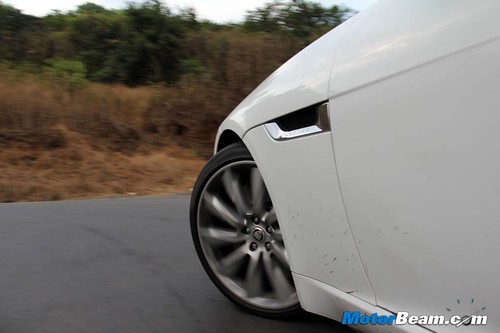 The F-Type has a 51:49 weight distribution (on the V8) and to achieve the same Jaguar has placed the battery and washer fluid reservoir in the boot. It’s a stiff car with 10% quicker steering than any other Jaguar, something quite apparent on the uphill climb towards Aamby Valley. You can continue to push hard and yet there is no signs of loss of grip. The V8 model has electronic active differential integrated into the Dynamic Stability Control system. While you are turning through corners, the dampers are stiffening up the body ensuring those wide Pirelli tyres keep you pointing where you intent to go. 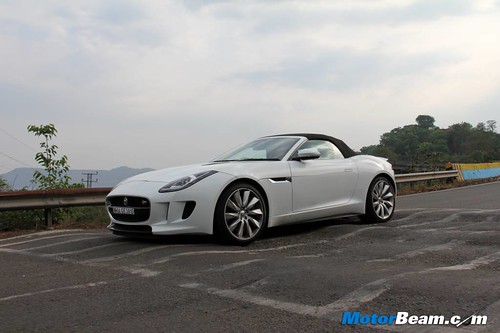 However, the big gripe with super cars is, that they have a terrible ride quality which can break your back. While the F-Type is stiffly sprung, its ride quality is quite acceptable, even on not so good Indian roads. The ground clearance is so good that you don’t scrape the underbelly on normal breakers while on absurdly constructed ones, you will have to tackle them sideways. The underbody of a sportscar touching on a breaker causes more emotional grief than damage to the vehicle’s underbody. 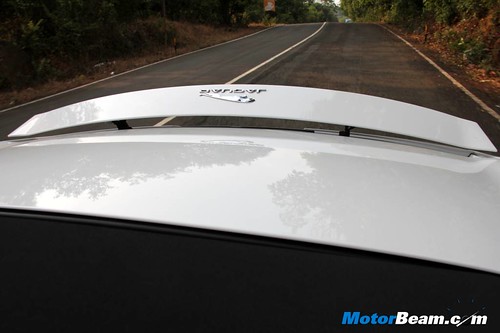 You really expect a car with so much oomph to stop dead in its track should you want to come to a halt and the F-Type’s brakes are more than up for the job. The pedal has good bite and the pedal feel is extremely positive too, helping you to brake late when driving spiritedly. The car remains totally glued to the road at high speeds, a rear wing deploying as soon as you whizz past 96 km/hr (60 mph), reducing lift by a whole 120 kgs. You can also manually engage the rear spoiler with a touch of a button on the centre console. 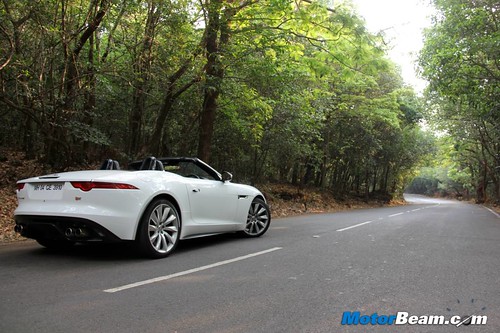 Our day with a supercar was quite eventful. We drove it in the city, on the expressway and through valley roads, the Jaguar F-Type pleasing us in all conditions. The car has the makings of a winner, it does so many things so well, yet with utmost style and panache. The F-Type has more than enough power than you would need, good dynamics and a cabin which makes you feel special. Yet, I haven’t spoken about the one thing which is reason enough to buy this supercar, the styling. I mean just look at it. Sleek, sexy and aerodynamic, the F-Type looks fast while standing still and that’s big enough reason why where ever we went, people stopped in their tracks to ogle at this British marvel. This is one supercar, a rare supercar, you can live with on a daily basis, it excels in all environments yet it doesn’t compromise on the driving experience, a deal hard to coin.

The Jaguar F-Type is a whole lot of fun in all types of conditions, you feel special driving it, parking it or simply even looking at it. It’s a supercar which is not only fast, sharp and poised, it’s also quite practical.