The dream of riding a superbike is free, the hustle to own, however, is sold seperately

All of us dream to own a litre class superbike in our lives. If not own one, every motorcycle enthusiast at least dreams to ride one. While there are a few perks of being an automobile journalist and riding a litre class superbike includes one of those. However, a stint with any of these is not that frequent but we got a chance to ride one of the fastest motorcycles in the world. The Aprilia RSV4 RF has its place in the top 10 fastest motorcycles in the world. And this is how one fine November weekend was spent with the RF.

Motor Quest: Aprilia have been developing motorcycles inspired from WSBK races. The design of the WSBK race bikes looks a lot like the production Aprilia bikes. However, the engine has its major input from MotoGP. The RF in the name stands for Race Factory which is a limited-edition and there are only 500 pieces all over the world. There is another called the RSV4 RR which is exactly the same but with a simple livery and slightly lesser hardware. 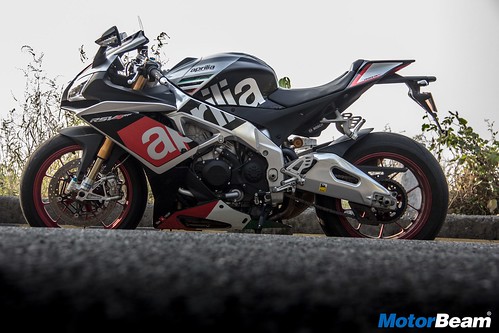 The Aprilia livery is all over, RSV4 is a proper attention seeker

Styling – The Aprilia RSV4 RF is the most attention seeking bike ever. With the Aprilia Racing livery all over, this superbike just grabs all the attention it can. Triple split headlight at the front gives it an aggressive face. The sleek fairing along with the tank and chassis has the Aprilia word written in a split. While the contrasting golden USD forks just add up to more attention. The belly pan has the Italian flag colour while the small tailpiece continues with the silver-red-black colour scheme. 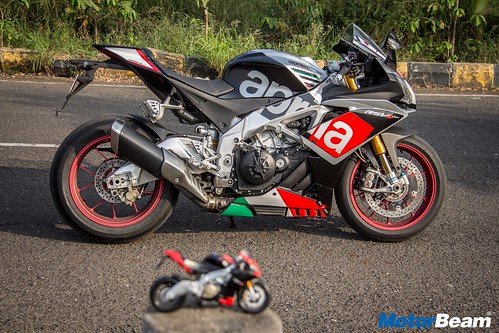 The Aprilia RSV4 RR is attractive too, like our scale model here

The Aprilia RSV4 RF has one of the most beautiful tail design ever seen on a motorcycle. Integrated LEDs for the tail-light with a shark fin design towards the end. It also gets a tiny well-designed mudguard to hold the number plate and the indicators. The exhaust also gets contrasting sliver-black with a big exhaust hole at the end. Dual steel discs add more to the front and not to forget the maroon forged aluminium rims holding the massive rubber giving the RF more character. Integrated LED indicators on the rearview mirrors go very well with the overall design. 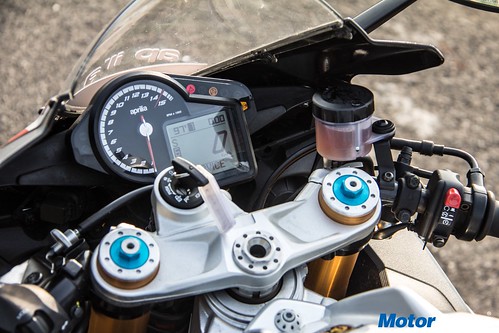 Not the console for a techie, but for one who loves to see the revs bulid

Instrument Cluster and Switchgear – The analogue-digital instrument cluster has been seen earlier on the Aprilia Tuono while here it gets a black background. The analogue tachometer has its redline marked at 14,500 RPM and the red needle looks rad. The digital console displays a few details like the engine temperature, gear position indicator, riding mode, traction level, speedometer as standard. However one would have to switch between the fuel consumption, odometer and trip meters. The switchgear feels premium yet it has very few buttons. It does not feel handy to toggle between riding modes or the trip meters. However, two separate switches for traction control make it better.