When one talks 150cc motorcycles, there is such a variety of body styles that are available, right from mass market commuters to premium commuters and even tourers like the Yamaha Fazer and Pulsar AS 150. In a move which comes as quite a surprise, Bajaj Auto has just launched a 150cc Avenger. Offered in a single Street trim, the Avenger 150 is targeted solely at city users but shares almost everything with the bigger Avenger Street 220. But does it make sense for a cruiser to come with a puny sized engine? 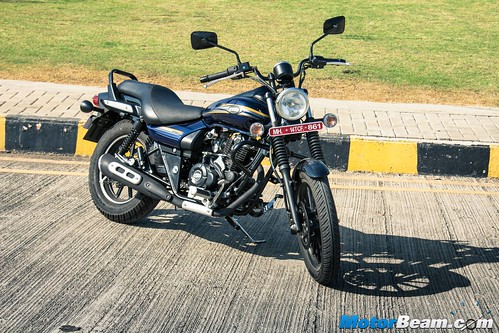 The dark theme gives the Avenger Street 150 a sporty appearance

Styling – The Street 220 and Street 150 in the Avenger range look the same as they use the same parts but what differentiates them is the colour, the bigger 220 model gets a matte black finish while the Street 150 comes in Midnight Blue shade only, at least for now but there are appealing pin stripes on the tank. There are of course differences underneath, like the engine and thus the lower capacity model is 2 kgs lighter. That said, for a layman, other than the badging, there is nothing to tell this is the smaller of the Avenger Streets. 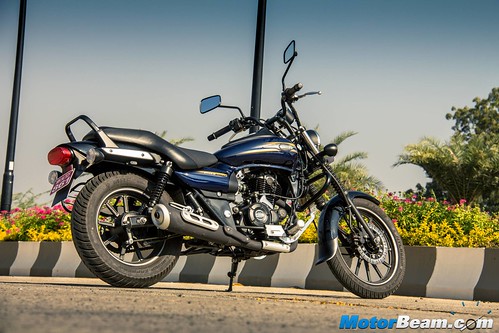 The Avenger Street 150 gets white hue headlamps, flexible indicators for higher durability, rubber bellows and the all black treatment. In fact, the bike will remind people of the Harley-Davidson Street 750 as this desi-cruiser too gets black finished engine, exhaust and alloy wheels (12-spoke on the front and 9-spokes on the rear). The Bajaj logo isn’t visible unlike earlier while the focus is on the Avenger brand name with the new logo. The cruiser stance and the sporty finishing does make the Avenger stand out although a projector headlight (the current lamp is 55W which offers decent illumination) and black levers would have been a nice touch. 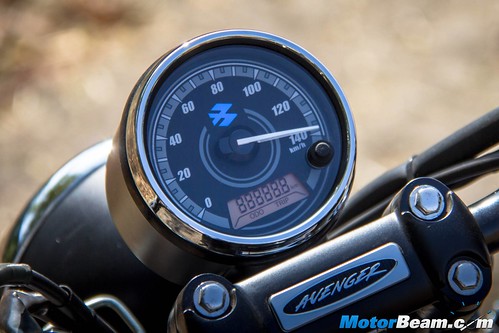 Easy to read instrument console doesn’t have much to display

Instrument Cluster and Switchgear – The instrument cluster is a simple unit but carries the basic information which one would seek. So there is a single-pod meter which carries the speedometer and an illuminated Bajaj logo in it. There is an LCD screen for the odometer and single trip meter while the fuel meter is on the tank. Indicator and tell-tale lights are on the tank, next to the fuel meter. The speedometer gets a chrome surround for that premium feel while the handlebar too gets the Avenger logo on it. Switchgear quality is good but the buttons feel a bit small and the pass light switch is a bit different. 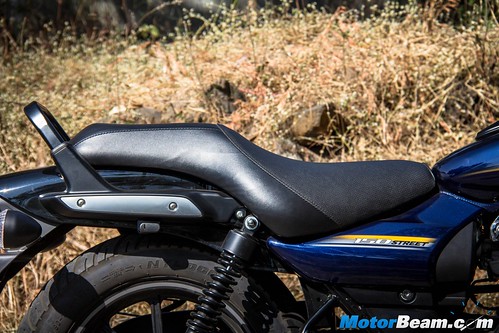 Ergonomics – Being a cruiser, the seating position is comfortable, as expected. One sits upright, the handlebars being in easy reach and the seat height is low enough to easily accommodate even short riders. The footpegs are front-set but not extremely so and get a new design for added comfort. The single-piece seat is contoured and gets an increase in seat height by 15 mm due to the increase in foam thickness, resulting in more comfort than earlier. The pillion doesn’t get a back rest but there is a new grab rail and pillion comfort is good but not great. The mirrors aren’t of much use as they don’t show a clear view of what’s behind. 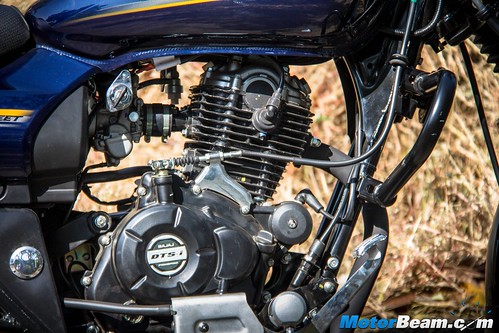 150cc DTSi powerplant comes from the P150 but gets tweaks

Performance – Bajaj Auto has plonked the same 150cc, 2-valve engine in the Avenger Street 150, the said motor powers the Pulsar 150. The company has worked on the motor heavily to improve low and mid-range performance and the Street 150 delivers on that count by being quick off the line, power delivery being linear. Just like the P150, peak torque comes up at 6500 RPM but Bajaj claims that close to peak torque is available right from 3500 RPM, up to 6500 RPM. The company also claims that the Avenger 150 has up to 10% higher torque than the Pulsar 150 in low and mid-range of the powerband. To this effect, a 38 teeth rear sprocket has been used for better ride-ability. 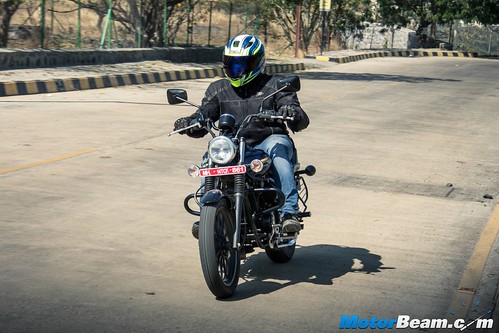 The Avenger Street 150 has ample performance for daily city riding

The Avenger Street 150 uses a large air filter (from the 220) for improved breathing and bottom-end performance. Bajaj does improve its engines with every launch and the same can be seen on the Avenger 150 as the mill feels so much better in terms of NVH (thanks to the improved CDI), the refinement levels being quite good but some vibes can be felt on the pegs and the mirrors. Even the way the bike redlines is a bit different from old models as there is smoothness in the top-end and the bouncing off the rev counter has also reduced. 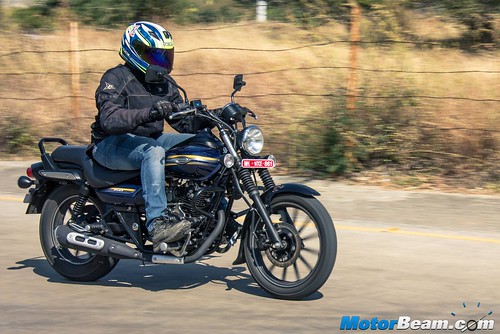 The Avenger Street 150 has a smooth shifting gearbox and the clutch is light too, thus this cruiser is quite city friendly with ample city performance. But post 80 km/hr, progress dulls drastically and the Avenger 150 doesn’t pull with much enthusiasm. With a long stretch of road, one will see a speedo indicated 120 km/hr but true top speed is around 105 km/hr. The bike screams when you give it the beans but in a nice way and the exhaust note sounds very similar to the Pulsar 150. There is no kick start on this Bajaj motorcycle and a maintenance free VRLA battery has been used. The motorbike also gets a new drive chain which Bajaj claims has up to 20% higher life. Real world mileage is between 42-47 km/l. 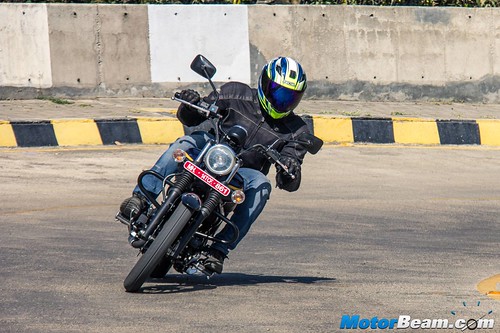 Predictable handling along with lower set bars help in maneuverability

Riding Dynamics – The Avenger Street 150 shares the same underpinnings as the bigger 220 models but has a 10 mm shorter wheelbase resulting in improved flick-ability but doing it quickly does tip the bike too much. It also is less wide and shorter in height, making it slightly more compact for city use when compared to the Street 220. The company has made tweaks to the second spring rate in the rear suspension to improve ride quality and also prevent bottoming out over speed-breakers, this works well as the improvement can be felt. The ride quality is good and the Avenger absorbs bumps without any fuss, the tube tyres offering good grip too. 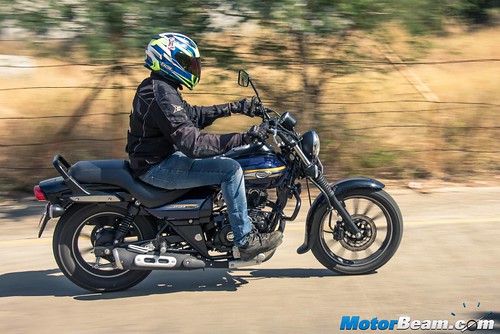 The chassis is stiffer and there is good front-end feel from the Avenger Street 150, enabling quick turn-ins by cruiser standards. The rear is a bit soft for comfort reasons but the motorcycle remains composed at speed and doesn’t feel nervy, offering good stability when you hit the ton. The 150cc model being offered in Street trim only, gets a lower set handlebar which Bajaj likes to call ‘Street Control’. Braking performance is good but not excellent and the braking unit comes from Endurance (for cost reasons) and not ByBre as one would expect. The 150cc model gets 20 mm smaller front disc brake over its elder siblings. 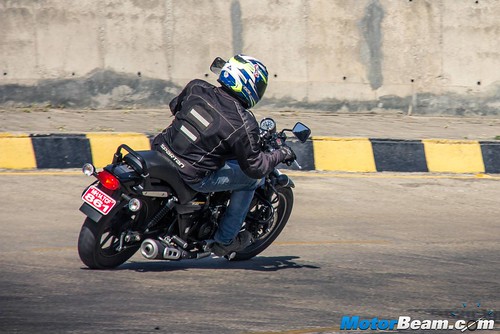 Those looking to buy a cruiser, you no longer need to break the bank

Verdict – A 150cc cruiser might sound like a ridiculous idea but there is some method to this madness. The Avenger Street 150 is aimed squarely at urban users and in that regard, it has plenty of performance on offer. But engine aside, this motorcycle borrows everything else from its elder sibling, the Avenger Street 220, making it an enjoyable ride at an attractive price. Sure this Avenger could have done with more power but given the price tag, it makes for an attractive buy for cruiser aspirants.

Bajaj Auto is using its tried and tested Pulsar formula with the Avenger by turning the motorcycle into a brand. The 150cc model might not be a cruiser in the real sense as it lacks highway punch but it does offer the snob value of a cruiser. 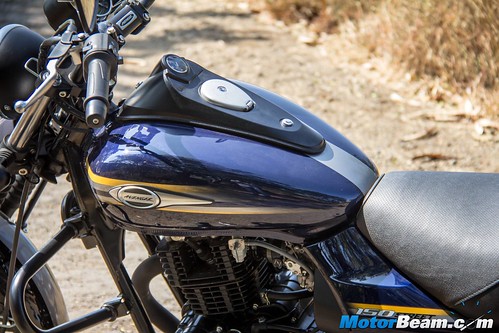 Nice graphics and new Avenger logo stand out on the tank

* More powerful engine would have made this 150cc highway friendly
* Only one single colour on offer, no matte black for the Street 150
* No tubeless tyres on offer 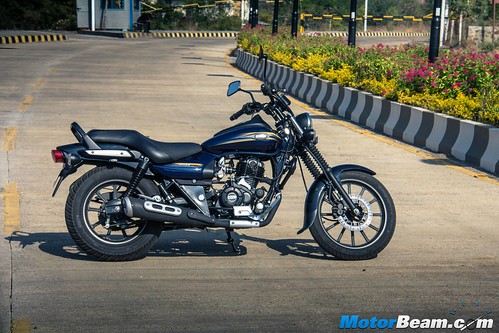 The Avenger Street 150 reminds people of the Harley-Davidson Street 750! 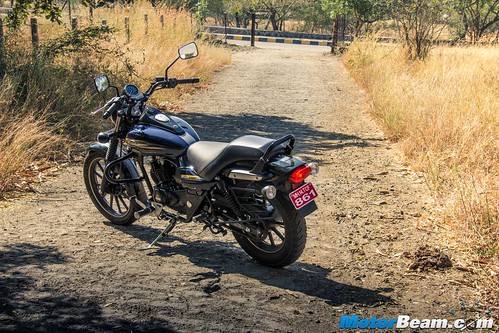 “The Avenger Street 150’s performance was quite surprising in a good way as it did not feel underpowered in the city. The styling does draw attention while riding it is easy with comfort being very good for riders of most sizes. However, if I had to buy the Avenger, I would spend Rs. 10,000/- more and get the Street 220 as the added performance is worth every penny.” – Faisal Khan, Editor, MotorBeam.
“Addition of this bike in the 150cc segment where there is literally no cruiser or no such comfortable motorcycle has made the Avenger Street 150 appealing. The engine from the old Pulsar 150 does work out well here but the weight of the bike isn’t much of a gamer as it stays the same as of the Street 220 (2 kgs less) with lesser power on offer and even lesser torque output.” – Dhanil Vira, Road Tester, MotorBeam.
“This new addition by Bajaj to its cruiser lineup is a very nice move as this motorcycle provides practicality and comfort, both at the same time. This with the Pulsar 150’s engine is tuned well and also performs well and sounds exactly like the Pulsar 150. As its chassis is carried from Avenger 220s, it feels heavier to cruise on in heavy traffic but the flattened handlebar, cruising ergonomics and comfortable seats feel nice to ride this bike.” – Viraj David, Road Tester, MotorBeam.