If efficiency is all your seek, then these bikes are tough to beat, they are the most frugal

Fuel efficiency is on the top of everyone’s mind in India and to help matters, multiple agencies started to rate the fuel economy of both cars and bikes. One such popular agency is of course Automotive Research Association of India (ARAI) and we have time and again criticised them for the over-optimistic and unrealistic mileage figures they slap onto vehicles. When Bajaj Auto launched the Platina 100 ES, ARAI certified it with a mileage figure of 96.9 km/l, making it the most frugal 2-wheeler in the country. Hero couldn’t let that happen as they have been the pioneers of “Fill It, Shut It, Forget It”, so the Splendor iSmart went to International Centre for Automotive Technology (iCAT) and came out becoming the world’s most fuel efficient bike with a claimed figure of 102.5 km/l. Now both ARAI and iCAT are government agencies but when the former tested the Splendor iSmart, they rated it at 65 km/l.

Motor Quest: While the Hero Splendor is the highest selling motorcycle brand in the world, in September 2012, Bajaj sold more Discovers than Splendors and at the press conference, the company’s president of motorcycle business said “It is upward for Discover and downward for Splendor”. However, since that time, sales of the Splendor have increased by 60% while that of the Discover have fallen by 60%. 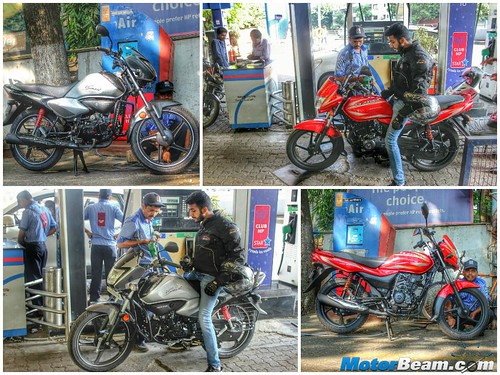 So there is a big difference between the mileage figures on the Splendor iSmart as quoted by ARAI and iCAT, which one is actually true. When we tested the bike, we got a number of around 58 km/l but then our testing is far from ideal conditions. Comparing the mileage of the Platina rated by ARAI with that of the Splendor iSmart rated by iCAT didn’t make much sense. So we tried to become like ARAI and iCAT riders by doing our own test. Naturally with my right wrist having a tendency to twist the throttle hard and fast, in came MotorBeam riders Omkar Jadhav and Viraj David, both being nearly the same in weight (Viraj is 2 kgs heavier). 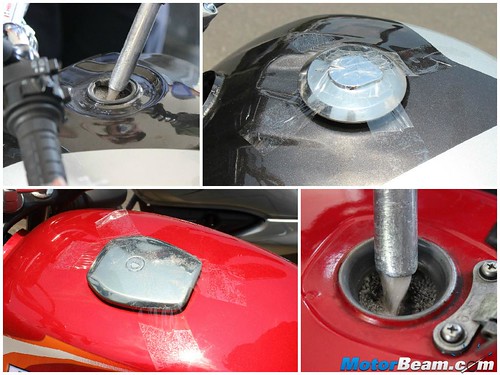 Full tanked and sealed fuel lids, time to see which is more frugal

Our method of testing was tank to tank. We took both the bikes to a fuel station in Pune, filled them up to the brim and tripped the meter on the Splendor iSmart while we noted the reading on the Platina 100 ES as it doesn’t get a trip meter. We sealed the tank with tape just in case and also checked the air pressure on both motorcycles. Now both the bikes we had were the top variant, so both come with electric start and alloy wheels. Our test Splendor iSmart was brand new, done only 109.4 kms at the time of starting this mileage test while the Platina 100 ES had raked in more kms and its odometer read 1215.7 kms. 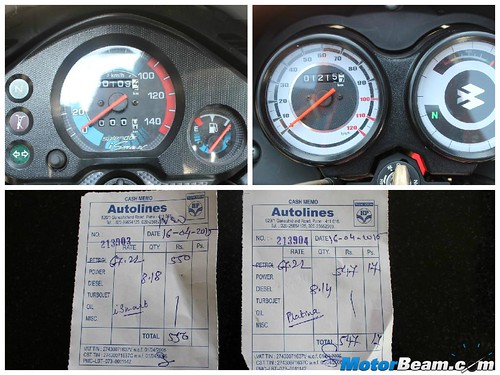 Now we could have simply chosen an open road and got the ideal condition aspect covered but since these are entry-level commuters which majority buyers use in the city, we decided to mix it up a bit. So our total test route was around 145 kms – 60 kms in the city and the rest on the highway. That’s roughly 40% city riding and the rest on highways. Since the Splendor iSmart gets i3S (idle Stop Start System), it had an advantage in the city as the bike would shut off when it was idle for more than 5 seconds and restarted again when you depress the clutch. At almost every stop, the Splendor iSmart would shut and save fuel which was crucial in this test. 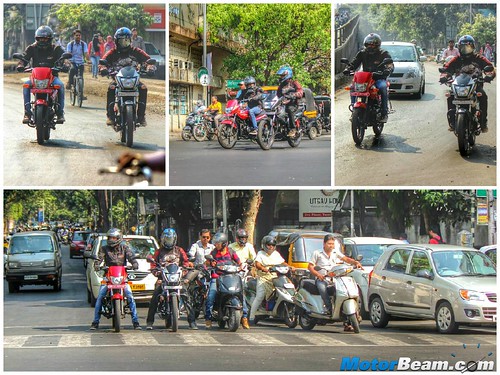 We headed to Lonavala but did not go up the ghats as the inclines would put stress on the engines, resulting in heavier throttle and reduced mileage. The riding was done by keeping oneself upright on the saddle, not exceeding 50 km/hr in the city while on the highway, the cruising speed was set to 60 km/hr. We did exceed 60 km/hr and did a top whack of 65 km/hr twice when we had to overtake large container trucks. It felt good, saving the earth a drop of fuel every time. One must remember, it takes absolute patience to ride like this on the highway, even if you are piloting a 100cc machine. Seems close to impossible to ride regularly like this in the real world. 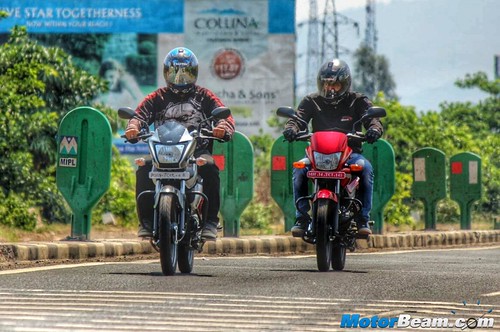 The engine powering the Hero Splendor iSmart is an old unit but very proven and it powers almost 70% bikes which are plying on Indian roads. The 97.2cc engine is a Honda motor which was recently tweaked by Hero to produce 8.36 PS and 8.05 Nm. Meanwhile, the 102cc mill in the Platina 100 ES generates 8.2 PS and 8.6 Nm. Both bikes are matched to a 4-speed gearbox and the engines on both are single-cylinder, 2-valve, SOHC units with air-cooling, the Platina using twin spark plugs (DTS-I) for better combustion. Peak power on the Splendor is produced 500 RPM later at 8000 RPM. The Splendor is 2 kgs heavier than the Platina at 110 kgs, in spite of it having a smaller fuel tank of 8.7-litres against the Bajaj’s 11.5-litres. Both bikes run on the same width tyres but the wheels on the Splendor are 18-inch (that should technically improve mileage as bigger wheels have a larger diameter so it will cover more ground) while the Platina uses 17-inchers. 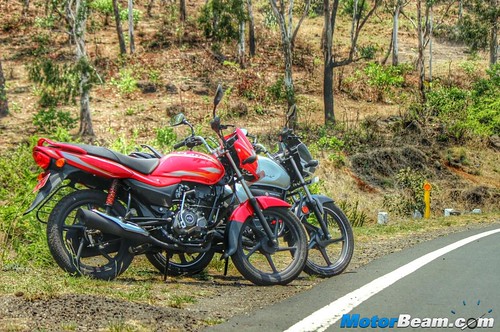 So before we get to the result, let’s first talk a bit about how these bikes are to ride. The Splendor iSmart is more comfortable to ride on long rides, it also feels more refined as the Platina does make some noise from the gearbox in the initial two cogs. The design of the Platina is old and it gets new colours and graphics along with orange indicators. In comparison, the Splendor iSmart looks quite good and also fresh in spite of carrying an old design. Both bikes offer easy handling but the suspension on the iSmart is better, it also gets tubeless tyres. Meanwhile, the Platina offers better performance and is slightly quicker too, both having a top speed of around 90 km/hr. These bikes get 110 mm rear drum but the front drum is bigger on the Splendor at 130 mm while the Bajaj uses 110 mm drum at the front too, braking performance of both bikes is average at best. 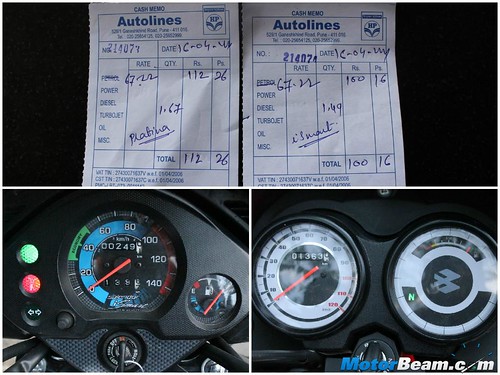 After completing the ride, we came back to the fuel pump with anticipation, who had won? But there was a problem, although ridden side by side all throughout, the odometer on the Platina read 1363 kms (total done 1363 – 1215.7 = 147.3 kms) while the trip meter on the iSmart showed a reading of 139.7 kms (249.1 kms on the odometer). The Platina took in 1.67 litres of fuel while the Splendor took in 1.49 litres, resulting in a mileage of 88.2 km/l on the 100 ES and 93.76 km/l on the iSmart. Now we have seen that the meters on Bajaj bikes are more optimistic but if we take the odometer reading of the Platina to calculate the mileage on the iSmart, it results in a figure of almost 100 km/l (98.86 km/l to be exact). Clearly, the Splendor iSmart won and what really helped it win comfortably is the i3S tech as our previous tests have confirmed that with the stop-start system, the Splendor is more frugal by at least 2-3 km/l. That’s the reason why with the same engine sans i3S, the Splendor Pro is rated at 93.21 km/l, lower than the Platina’s official figure. This test also proved that with careful riding, one can come close to claimed figures, the Splendor might have won this test but the Platina costs Rs. 10,000/- less which is enough to go for 13,121 kms on the above mileage.

The Bajaj Platina 100 ES and Hero Splendor iSmart aren’t direct rivals because they have a significant price difference between them. Ideally, it’s the Splendor Plus which would compete with the DTS-I powered bike and that variant of the Splendor is less frugal than the Platina. However as far as mileage goes, the Splendor iSmart is indeed the world’s most frugal motorcycle. 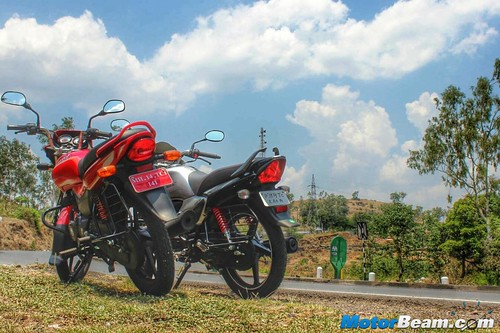 When ridden carefully, you can extract much better mileage from any vehicle