The most awaited and talked about motorcycle in the past few months, the Pulsar RS 200 seems to have lived upto expectations of prospective buyers and although sales haven’t started in all cities yet, the bike has managed to garner 4000 bookings already. With every new Pulsar, Bajaj does try to do something new, in the case of the Pulsar RS 200, there is a lot to talk about in spite of the bike essentially being the full faired version of the Pulsar 200 NS. We had ridden the bike earlier on the streets but only for a brief time while later we did sample it on Bajaj Auto’s Chakan test track and came out impressed. Now we put it through our road test to see how the flagship Pulsar, which has been in development for almost 3 years, performs in day to day riding.

Motor Quest: The Pulsar RS 200 is the second of the second generation Pulsar and is the first full faired motorcycle from Bajaj Auto. It was envisioned at the time the 200 NS was being developed and the design was first showcased on the Pulsar SS 400. 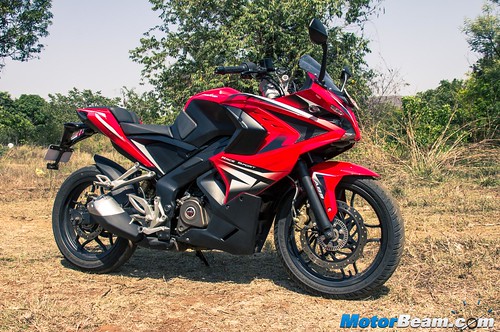 Remove those graphics and the Pulsar RS 200 will look better, we think

Styling – The Pulsar RS 200 gets a full fairing and it does gel well with the rest of the design but there are just too many cuts and creases on the fairing, making it look very busy and overdone too. The motorcycle also gets twin projector headlights (offers fantastic illumination at night) along with daytime running lookalike LED parking lights and LED indicators which are borrowed from KTMs. The graphics seem unnecessary as the RS 200 has been spotted without graphics earlier and did come out as more appealing. Build quality is good but the fairing isn’t bolted on as strongly as some vibes did creep in post a hard ride. 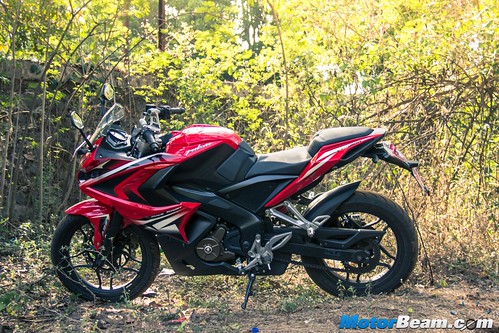 What we simply don’t like on the Pulsar RS 200 is the tail light and that’s just not our opinion. Almost everyone we asked about the design, simply had lots to say about the rear tail light specifically, saying things which we rather not write here. Sure that floating tail light is different but it’s just not in-line with the design of the rest of the motorcycle. The tank and fairing do appear bulky from certain angles while the rear is a bit pointed. The stubby exhaust looks good but overall, the RS 200 could have looked better. Sure, there are many (mainly in smaller cities) who will love the way the RS 200 looks. 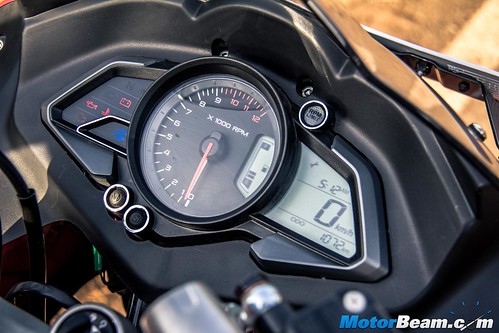 Instrument Cluster and Switchgear – The same instrument cluster as the other 200cc Pulsars (200 NS, 200 AS) features on the RS 200 but gets blue backlit instead of orange. Start the bike and it swipes all the way to the maximum number on the tachometer. The analogue-digital instrument cluster is easy to read and with the redline needle being right in the centre, keeping a tab of engine RPMs is a breeze. Bajaj logo glows like a DRL at all times while the console also has indicators for service due, low battery and side stand. There is also a clock but a gear position indicator is missing. Switchgear quality is very good and the switches are backlit for that cool appearance in the dark. 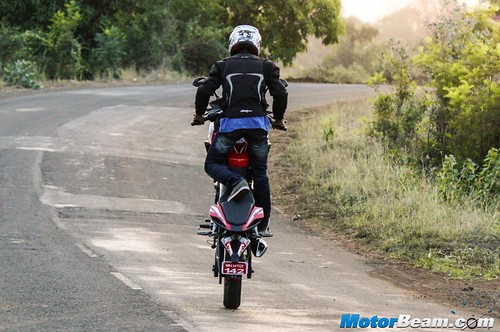 Ergonomics – One sits upright with a bit of a lean, thus the Pulsar RS 200 boasts of a comfortable riding position with a hint of sportiness to it. The seats are well padded for stress free long rides (there is a tank guard too) but pillion comfort isn’t very high and the grab rails aren’t the best to use. This bike is more suited to tall riders than short riders while people having the average Indian height will find it reasonably easy to pilot this Race Sport Pulsar. The mirrors aren’t the best in terms of giving you a good view of what is behind. 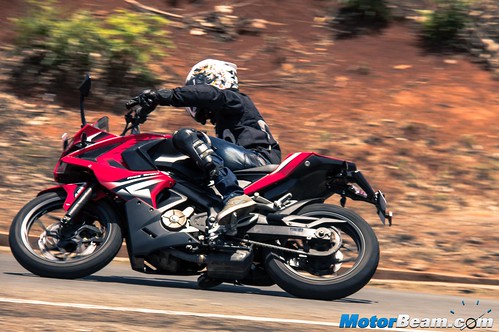 The engine on the RS 200 is very refined, vibrations are much lower than the NS

Performance – The Pulsar RS 200 uses the same engine as the Pulsar 200 NS but gets a few changes for improved performance. For starters, the motor now gets fuel injection and that itself makes a world of a difference, the RS 200 being much more refined. The mill gets a new head to accommodate the Bosch sourced FI system and compared to the 200 NS, the RS 200 gets 4 mm bigger throttle bodies. The gearing is shorter in sixth for improved mid-range performance while the added 1 PS and 0.3 Nm results in the triple-spark motor generating 24.5 PS and 18.6 Nm. 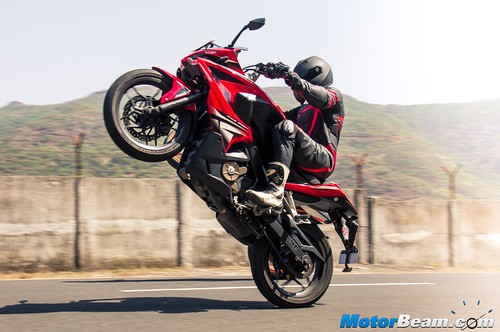 The most powerful Pulsar, the RS 200 is fast despite the added weight

The RS 200 sounds nice in the top-end, it pulls to triple digit speeds easily

The increase in power was vital because with the fairing and the projector headlights, the Pulsar RS 200 now weighs 20 kgs more than the 200 NS. However, all that added weight isn’t felt when you get riding because the RS 200 feels responsive from the word go, building power in a linear manner with a punchy mid-range. The top-end performance is good too and the motor screams in a pleasing way which is more audible thanks to the side mounted exhaust. Redline comes in at 11,000 RPM and NVH levels are good, with vibes from the mill being very much in control but they are still there near the redline. 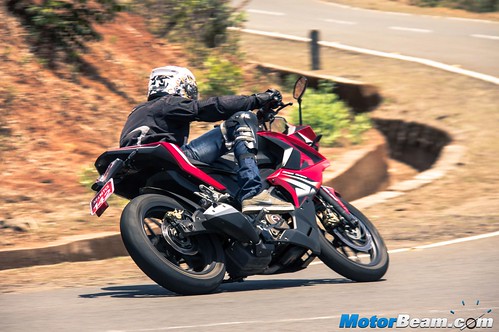 Linear power delivery makes it easy to ride in the city, gearbox is slick

Strapping on our VBOX and doing some test runs, we managed to do the 0-60 km/hr run in 3.92 seconds while the ton came up in 10.12 seconds, the motorcycle supporting clutchless shifts. The top speed on the console was 152 km/hr in top gear while the same translated to 141 km/hr on the VBOX. The full fairing helps in accelerating quickly to higher speeds and the better aerodynamics is quite apparent too. The gearbox offers smooth shifts and the clutch is light. Just like the 200 NS, the RS 200 comes with snail-cams for adjusting the O-ring seal chain of the motorcycle, a rare feature in an Indian motorcycle. During our test, we managed a fuel efficiency of 36.5 km/l which is very reasonable for a 200cc bike. 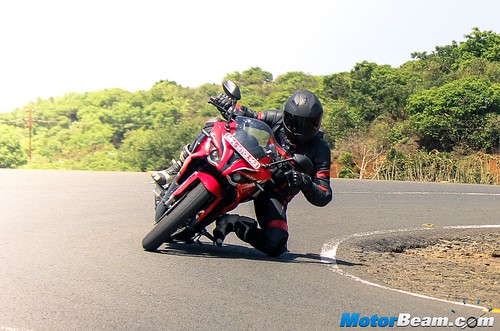 Riding Dynamics – Using the same chassis as the 200 NS, Bajaj Auto has given the Pulsar RS 200 clip-on handlebars along with a sharper steering rake angle by 1 degree, resulting in a decrease in wheelbase by 8 mm. The weight has shifted at the front for a heavier feel at the steering. The swingarm is longer and the bike is heavier but it does corner nicely, invoking a lot of confidence to push harder. The MRF tyres offer good grip but the RS 200 isn’t a razor sharp machine like the Yamaha R15 or the KTM RC 200. However, the Pulsar RS 200 offers a good ride quality and although it’s stiffer than the NS, it does a good job of absorbing bumps. 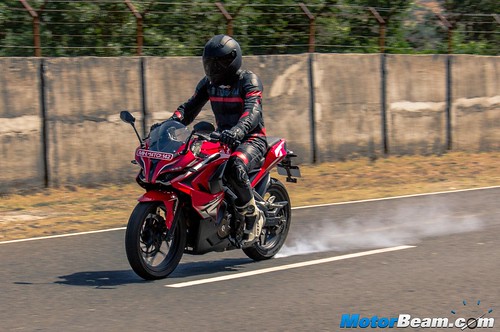 The second generation Pulsars (the 200 NS, RS 200 and the 200 AS) are leaps and bounds ahead of the previous Pulsars in terms of dynamics and where the old Pulsars weren’t corner cravers, the new ones really please you with the level of feel and feedback they offer. Top drawer components (perimeter frame and rear monoshock) and effective weight distribution are to credit for this improvement in handling. The Pulsar RS 200 gets the option of ABS which is a front-channel one (can’t be switched off), i.e. working on the front wheel only. When everyone in the team rode the bike, everyone locked the rear wheel because most have the habit of applying equal brake pressure on both wheels, having ABS just at the front doesn’t help as much. Braking performance is good otherwise but we recommend the non-ABS variant over the ABS model. 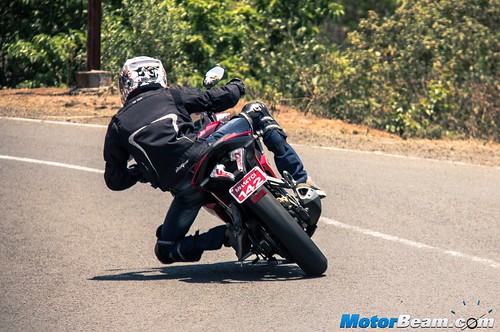 Verdict – The Bajaj Pulsar RS 200 delivers all that it promises, it’s the fastest Pulsar and also the most advanced one. What Bajaj has managed to do very well is, give a good balance between sportiness and comfort, something which will please a lot of prospective customers. At its price, there is little direct competition to the Pulsar RS 200 and given the front-channel ABS model which costs Rs. 15,000/- more (on-road price difference between the variants), we suggest the non-ABS model as the single-channel ABS isn’t as effective as a full blown ABS (when TVS can offer a dual-channel ABS on the Apache 180 with on/off button for lesser money, why can’t Bajaj?). Still, as a package, the Pulsar RS 200 is a very compelling one.

The Pulsar RS 200 has good performance and can corner very well. In spite of that, it is very comfortable and with a bigger fuel tank than its rivals, has a longer range too. This motorcycle is practical and can be used for daily city duties, track riding and even touring, making it an all-rounder at an attractive price. 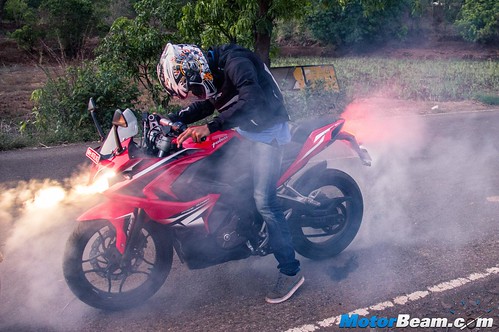 The RS 200 has MRF tyres, they make a big difference over the Euro Grip rubber

* Full faired design means those who want a sports bike will now look at the Pulsar
* Balance between ride and handling is good, can corner but won’t transfer the bumps
* Engine feels more refined and is smooth, vibes are lower too and top speed has improved

* Single-channel ABS is only half the use, for the price, dual channel should have been offered
* Styling is still over the top, some bits are just out of place on this bike 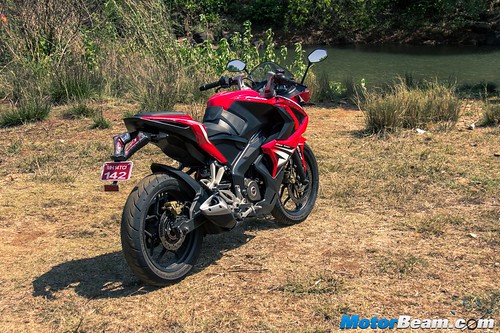 For Pulsar lovers, the RS 200 might not be all new but is a big step ahead

“Call me crazy but the design of the Pulsar RS 200 doesn’t bother me and it has started to grow on me but yes, the tail light is still not easy on the eyes. What the Pulsar RS 200 does offer in spades is performance and comfort, making it easy to live with on a daily basis. It’s no specialist machine, it does everything well but the single-channel ABS isn’t something that is convincing. All that said and done, it’s the best Pulsar till date and a leap in the right direction” – Faisal Khan, Editor, MotorBeam.
“The Pulsar RS 200 has good performance and the engine is smooth and refined, likes to redline and helps one corner at higher revs with complete comfort. The bike handles nicely and the sound is nice too. On the flip side, there are vibrations at higher speeds and that tail light just doesn’t gel with the overall design. A good bike to point to the sky, the RS 200 is wheelie friendly too” – Hrishi Mandke, Pro Stunter.
“What pleases most about the Pulsar RS 200 is, in spite of being fast and a good handler, it’s also comfortable so long rides and touring is an easy task on this machine. I like the design at the front and side, the ride quality is good and the engine also sounds exciting. However, the mirror placement is a bit wrong, there are no air gaps on the fairing and wider tyres (like the RC 200) would be quite welcome on this Pulsar” – Viraj David, Road Tester, MotorBeam.