This really is an all-rounder, it’s a sports tourer that enjoys spirited riding

It’s been my pleasure to be a proud owner of a KTM Duke 390 and a Kawasaki Ninja 300, that being said when I heard Benelli was launching another bike in the same segment, it got me nothing short of excited to see competition get so strong from other manufacturers. First, from Honda with their now outdated CBR250R, then came competition from the rather forgotten machine called the Hyosung GT250R which faced a lot of issues and made you envy a Royal Enfield owner, which is saying something. KTM then comes to the mix and takes the segment by storm with the RC 390 which offers a lot of performance while still undercutting all of the above-mentioned bikes in terms of value and price. If this isn’t enough, further adding to the mix comes the well reputed and much awaited Yamaha R3. To be honest with you, most of the bikes mentioned above aren’t single-cylinder machines or proper sports bikes. Except for the RC 390, they all lean more towards the sports touring family. So just like me, I bet you too are very eager to find out where this new twin-cylinder menace from Italy (or China) fits in.

Motor Quest: The Benelli 302R is the full-faired version of the TNT 300 but isn’t mechanically the same as its street-fighter cousin. It is Benelli’s only full-faired motorcycle after the 600 GT. 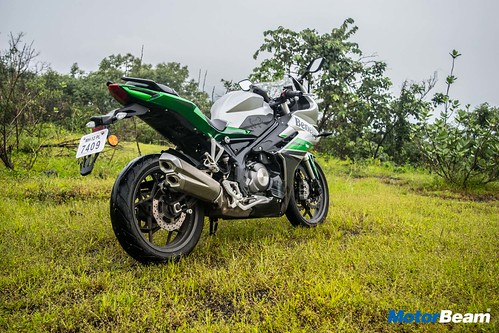 A moment of silence to admire this stunning design

Styling – To begin with, the silver and green colour look beautiful and is a unique colour not seen by any other manufacturer in this segment or above. The Benelli 302R is one of the, if not, the longest motorcycle in its segment. It has great road presence and immediately gets people’s attention with its single yet twin headlamp set up with LED daytime running lights. Even the front wheel doesn’t miss out on any attention to detail with the twin petal discs and the front fender with its vents and lines just look so purposeful, adding onto and complimenting the aggressive yet bold design. The attention to detail is so evident once you walk around the motorcycle and start noticing things like the Benelli logo under the visor and at the tip of the tail. No matter where you see, you’ll always find some design queue incorporated in every part. The strong and characterful design is just gorgeous, with the shoulder seamlessly blending into the rest of the fairing along with an LED indicator mounted on each side. The front half of the fairing being divided by the smart-looking steel-tube trellis frame that links the steering head directly to the swingarm pivot. The engine casing looks expensive and exudes quality and is a total eye candy. 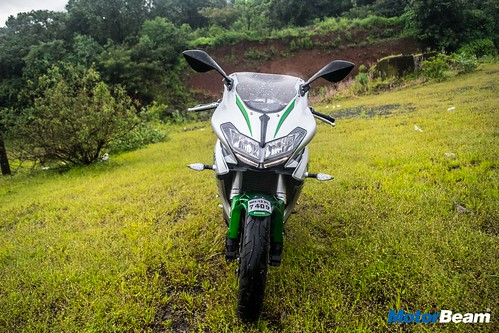 The menacing look with the sleek daytime running lights

Move up to the tank and you’ll notice the Lion logo proudly engraved into the fibre under the tank, speaking of which, the tank has these strong chiselled lines that make it look muscular and downright bold. The footpegs are quite unique and are the same ones found on its elder siblings which is never a bad thing. The 302R gets split seats with the name ‘Benelli’ engraved into the seats which is quite an expensive and cool looking feature. The green on this silver runs from the front fender, all the way across till the tail. The tail design is a little bland compared to the sharper tails found on its competition but the LED tail-lights help spice things up. One thing I really liked was that most people overlook the design of the wheels. They don’t look as large or chunky as the ones found on its naked sibling, pun intended, but still looks intriguing and are finished in gunmetal grey, unlike the usual black or orange. One thing I’m still getting used to is the exhaust. I personally don’t find it very attractive but it’s the sound it makes that gets me going, more on that later. 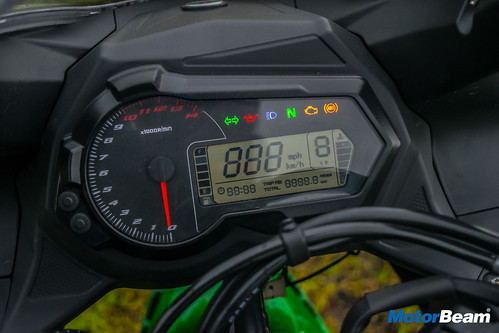 The Benelli 302R gets a simple yet dated speedometer

Instrument Cluster and Switchgear – The instrument cluster looks extremely dated and like something you’d find on a Bajaj Pulsar. It shows you most basic information like speed, two trip meters, an odometer, a fuel gauge, a gear position indicator and an engine temperature gauge. The gear position indicator is large and easily visible even at high speeds but sadly misses out on a shift light indicator, something that would have been a nice addition. The speedometer is finished in an orange backlight which adds to that rather bland feel. The buttons are well positioned and are of good quality and the starter button is in red which is different and feels purposeful. There is no headlight ON switch, just a switch to alter between high and low beam just like all bikes these days due to AHO. The motorcycle also gets adjustable clutch and brake levers which is a welcome addition. 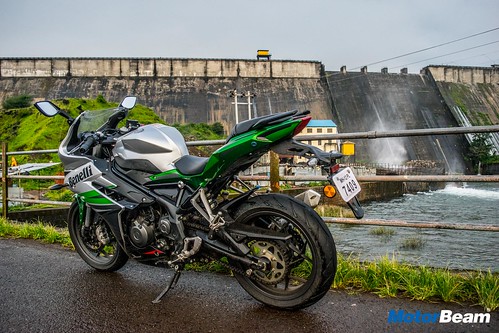 Ergonomics – This is a very comfortable machine and even after an entire day of riding, I barely broke a sweat. I’m going to go ahead and say that this clearly is more comfortable than the KTM RC 390 and even manages to outdo the Kawasaki Ninja 300 in terms of comfort. Touring is a breeze on this machine with its thick and wide seats and upright yet leaned forward riding position that manages to strike an amazing balance between laid back and committed. The pillion doesn’t sit too high up and is quite comfortable. The mirrors are positioned vertically unlike the usual horizontal positioning found on other bikes. At first, it takes a little getting used to but the mirrors are wide enough to offer good visibility and only someone really broad would have trouble with their arms or shoulders obstructing their view but there is a serious problem once you get moving anywhere past 4000 RPM and the entire mirror goes blur due to the amount of vibrations that get to it, making them practically useless beyond 60 km/hr. 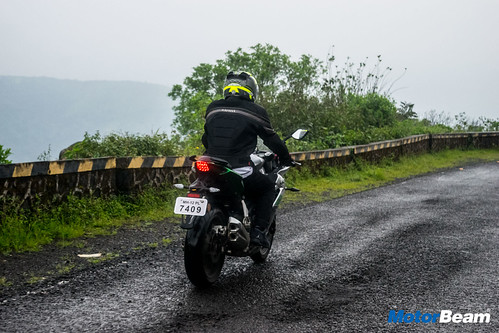 Both the rider and pillion feel comfortable on long rides

The footpegs are placed at a comfortable position letting someone even as tall as me get comfortable without any complaints but it too suffers from vibrations at higher revs and just for the record, I’m 6 feet tall. The visor is very short offering little or no wind protection and barely even deflecting the wind while riding in a tucked-in position. The 302R could definitely do with some better wind protection if you plan to ride at higher speeds. Another issue I faced with this motorcycle was the headlamp illumination which is very poor. Besides its twin headlight setup, it still doesn’t manage to light up the road ahead of you and even the high beam feels like an extra low beam. I wish Benelli would have gone with the times and given this beauty an LED headlamp but I suppose that would be beating a dead horse.