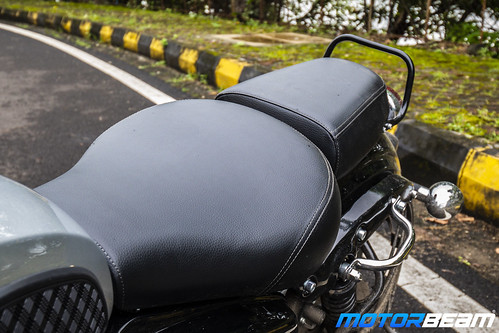 Ergonomics – The Benelli Imperiale 400 has an upright riding posture. This gives the rider a commanding poise while riding. With a seat height of 780 mm, it is comfortable for the average Indian height rider. Catering to its upright riding position are the wide handlebars and center-set footpegs. The fuel tank has rubber grips, to aid the rider grip on while riding. The brake and clutch lever has a long reach, this would be difficult to get used to initially, but it is acceptable to a certain degree. The pillion has a smaller seat but the posture is similar, making it quite comfortable for both. The mirrors are wide and give a decent view of what’s behind. 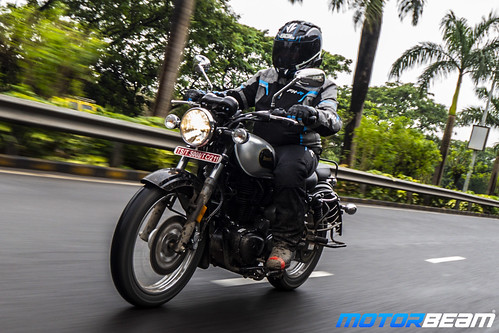 Hitting triple-digit speeds isn’t much of an issue

Performance – The Benelli Imperiale 400 is powered by 374cc single-cylinder motor which produces 21 PS of power at 5500 RPM and 29 NM of torque at 4500 RPM. The motor has a strong mid-range with a decent top-end too. The throttle response is quite linear and the redline starts at 6000 RPM, but if pushed, it revs almost up to 7000 RPM. This power is transferred to the tarmac via a 5-speed gearbox which is slick shifting and the clutch isn’t too hard either. The bike lacks initial low-end torque which essentially characterizes a cruiser. The gearbox needs to be downshifted to gain speed after a slow down. 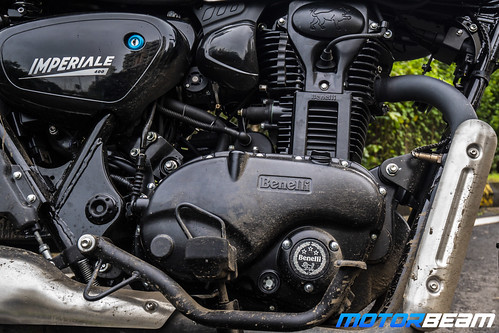 This single-cyliner air-cooled motor is quite refined too

Thanks to the counter-balancers, Benelli has relatively won the refinement game. The bike experiences some vibrations at idle, but it diminishes as soon as the revs climb on the tachometer, giving it a smoother riding experience. The bike doesn’t heat up much even in stop-and-go traffic. The sweet spot where the powerplant comes alive and vibrations are at a minimum is between 80 to 100 km/hr. Some amount of vibrations can be felt on the handlebars and foot-pegs at higher speed post 100 km/hr and the Imperiale tops out at 130 km/hr. 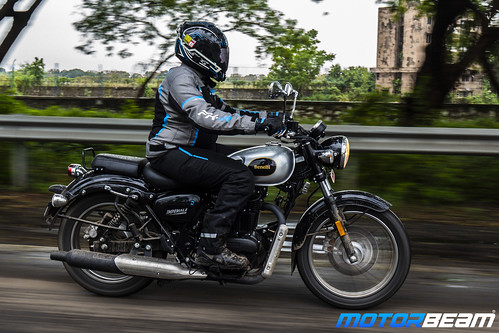 Straight-line stability is quite brilliant

Riding Dynamics – Imperiale 400 is impressively comfortable on Indian roads as it has an upright riding position. This with the not-so-wide handlebar makes it easy to tackle through Indian traffic. Long rides on this bike are no issue, as the rider seat is sprung underneath and the cushioning on the seat is soft yet firm. The 41 mm front suspension and pre-load adjustable rear suspension can take on a bad patch of a road without much hassle. The suspension is on the softer side which makes it a very comfortable package. It is very agile and comfortable during the straight-line but not much confidence inspiring while tipping into corners. 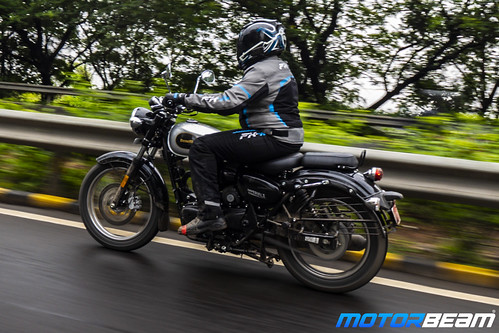 This Benelli can make-do with commuter duties as well

The Benelli Imperiale gets 19-inch front and 18-inch rear spoke wheels shod to TVS tyres. The tyres aren’t wide but they grip really well and the feedback is adequate. It also gets dual-channel ABS as standard with a 300 mm disc at the front and a 240 mm disc at the rear. The feedback from the brakes is progressing and it misses out on an initial bite. But the stopping distance isn’t much of an issue as the brake and tyre combo works well. The Imperiale has brilliant ride quality while the dynamics are suitable for the character of the bike.

Benelli Imperiale 400 Price To Be Under Rs. 2 Lakhs