Touring capabilities with a hint of adventure? Both these bikes are loaded to go the distance you can only think of

There have been a lot of motorcycles coming in, in the last few years. But it is the adventure category that has had made everyone go nuts. While we rode the Benelli TRK 502 just a few weeks back and also had a chance to ride the Suzuki V-Strom 650. We thought what if we compare both the middle-weight adventure-tourers. Priced quite apart, both the motorcycles serve the same purpose, a battle of an Italian heavy-weight against a sharp Japanese machine.

Motor Quest: Suzuki launched the V-Strom last year in India, while it was on sale worldwide since quite some time. This year, Benelli launched the TRK 502 and the 502X which they had showcased 3 years back in IBW. Both the motorcycles have been on sale worldwide while they enter the Indian market when everyone is looking for an adventure. 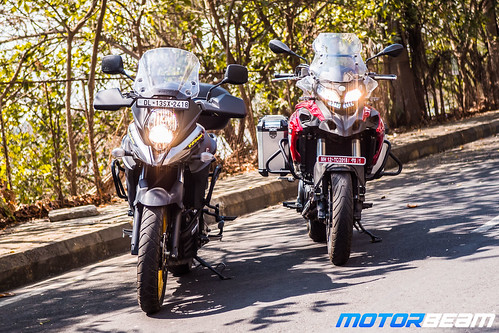 The V-Strom is sleek and sharp, the TRK looks bulky and huge

Styling – The Benelli TRK 502 was showcased in 2016 and since then the design has been exactly the same. However, the V-Strom incorporated the design from its elder sibling and looks a lot similar to the V-Strom 1000. In comparison, the Benelli is bulky, speaks for road presence while the Suzuki stays sleek and small. The adventure fairing on the TRK is edgy and almost twice the size of that on the V-Strom. However, the headlight unit is bigger on the V-Strom while the windscreen visor also seems more purposeful. There are a lot of tubular parts and exposed chassis on the TRK while the V-Strom stays quite covered and neat. The Benelli gets LED indicators while the V-Strom has halogen units while both get LED tail light. 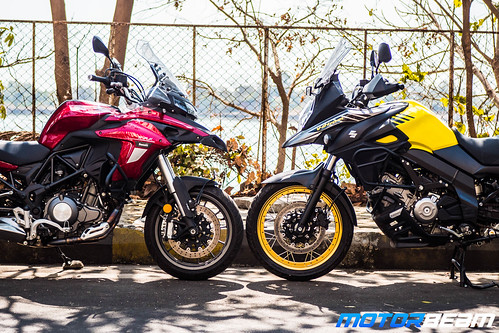 Both the motorcycles are attention seekers, while the V-Strom is sleek, the TRK 502 is a bulky machine

The crash protectors on the TRK also make it look huge however the same on the V-Strom are small and appropriate. The TRK 502 is equipped with 10-spoke alloy wheels whereas the V-Strom gets spoked wheels. The colour scheme on the V-Strom is also quite appealing but the single shade all over the TRK looks attractive too. The V-Strom here had a plastic topbox which stil made it look sleeker, however, the TRK 502 had metal panniers adding more to the bulk. Overall, the Benelli has the looks and attracts more attention over the Suzuki. 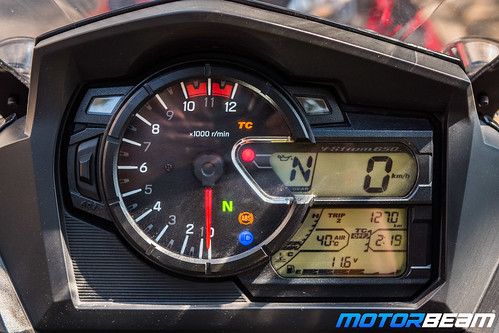 V-Strom’s cluster is loaded with a lot of information

Instrument Cluster and Switchgear – The instrument cluster on the V-Strom as well as the TRK is an analogue-digital unit. But the one on the V-Strom displays a lot more information and it is segregated really well. Both the consoles have a tachometer in the analogue section while the digital bit includes the odometer, twin trip meters, clock, temperature and fuel gauge and a gear position indicator. With a single switch, one can switch between miles to kilometres on the TRK. However, the V-Strom provides more information with the battery voltage, current traction level and live and trip mileage indicator. 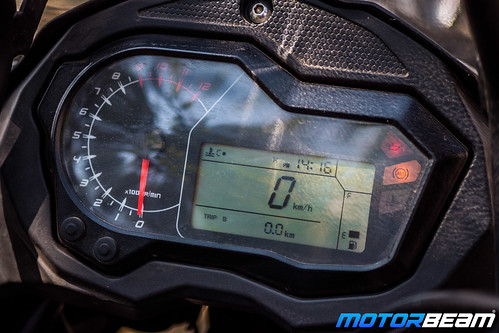 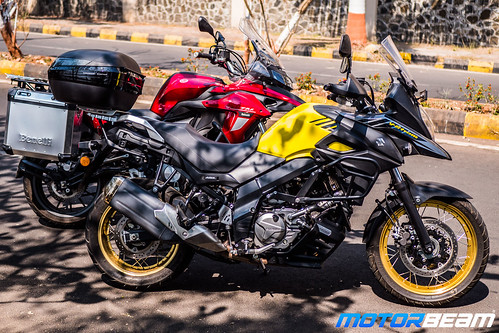 Suzuki has a 35 mm higher seat height than the Benelli

Ergonomics – Both the V-Strom and the TRK have an upright riding posture but the Suzuki has 35 mm of extra seat height against the Benelli. The handlebar is also taller and closer to the rider on the Benelli while the V-Strom feels slightly further away. Shorter riders would find the TRK more comfortable and accessible than the V-Strom but the pillion seat is too high on the TRK. Hence the pillion would love to be on the V-Strom as it has more space to move around. The rear-view mirrors on the Benelli are not that useful but look good while the ones on the V-Strom might look too huge, they provide a good view of what’s behind. The V-Strom also gets knuckle guard and both the bikes get adjustable brake levers. Overall, the V-Strom is an easy goer but the TRK feels more composed.

Suzuki V-Strom 650XT Travelogue – Ride To The Mountain Of Death