Suzuki V-Strom 650XT Travelogue – Ride To The Mountain Of Death

After a year full of race-events, it was time to take a break! Being friends with a good set of people who like traveling is a boon, but being friends with a set of people who like traveling to places far and unexplored is even better! Talking about these friends, they had a plan to travel for 15 days and cover the best possible places in the southern regions of India and I wanted to be a part of it. So, I planned out a shorter visit version which would make do within 5 days. For this, I got the Suzuki V-Strom 650XT as I feel it is by far the best middle-weight tourer one could get. 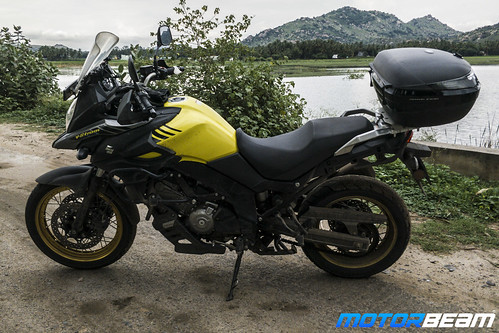 This time around, I was accompanied by a proper litre-class tourer, the Kawasaki Ninja 1000, another was one of the craziest street naked, the Triumph Street Triple RS and a comfy mile-muncher, the Maruti Ignis. We were split into two groups, the 3 bikes rode along the old highway while the Ignis kept a good pace and took the expressway as we left from Mumbai. I could brag that I had the biggest fuel tank here but the Ninja and the Street Triple RS had similar fuel stops and I would refuel at the same time too. Our first stop was right after Pune where we were reunited with the car guys too. Quick breakfast and we headed along the Mumbai-Bangalore highway. By this time I could say, to keep up with the big bikes like the Ninja 1000 and the Triumph Street Triple RS, the V-Strom turned out to be perfect. 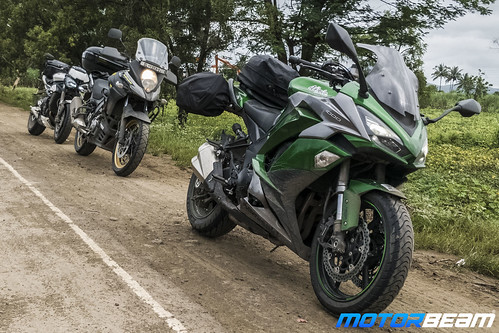 We had a leader, leading the way till Bangalore

While we were headed down south, the plan was to reach Bangalore the first day itself! Being a little optimistic and with the last year’s experience, Mumbai-Bangalore in a day was easy-peasy, but we did not think of the fact that we were riding big bikes and the new road construction would take a case on us. By the time we were halfway through, we reached Hubli and stopped for lunch. The Ignis caught up to us because it required no fuel stops whatsoever but getting through multiple tolls it was left behind. After a sumptuous meal, we left Hubli and kept the pace going but from there till Chitradurga the national highway was no longer a highway. There were too many diversions and the amount of road construction brought our pace down. 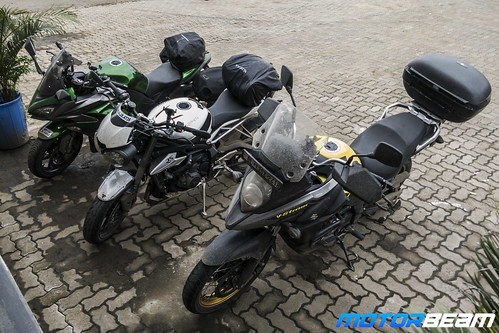 The roads after Chitradurga till the Electronic City, the southern-most part of Bangalore city, were super smooth but the time lost during the bad stretch made us ride in the dark. We reached Bangalore, our first stay, at 10 pm after completing over 1000 kilometres in a day. At Motorbeam, I am known for arranging the best possible stays at the most economical costs and our stay was right on the highway with good rooms and a decent service too. I was the only one not having a sore butt because the V-Strom’s seat is very comfortable. It is so good that my friend who was riding the Street Triple RS switched with me for the last 100 kms. The day ends and we had a good night’s sleep as the next stretch was for Kolli Hills, the Mountain of Death, and it was merely 270 kms away. 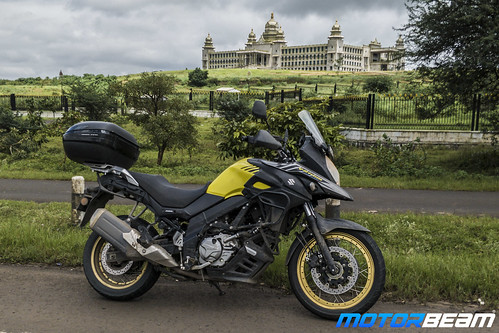 The roads of Karnataka are beautiful but as soon as you enter Tamil Nadu it gets even better with brilliant scenery around. We reached the base of the Kolli Hills and took a stop for some refreshments as the next 30 kms were gonna be full of vertical hairpin climbs! Kolli Hills is known as ‘the Mountain of Death’ because of the 70 hairpin bends within 30 kms leading to a total elevation of over 1300 meters. As we were entering this place on a weekend we were expecting a typical weekend crowd, but from the first few hairpins, we figured that we had to be super careful. A bare minimum space for two cars to pass and a climb that you might burn the clutch or wear the brakes if riding or driving down. This, with the number of busses and travelers we encountered and the number of near misses we had, it definitely felt like ‘The mountain of death’. 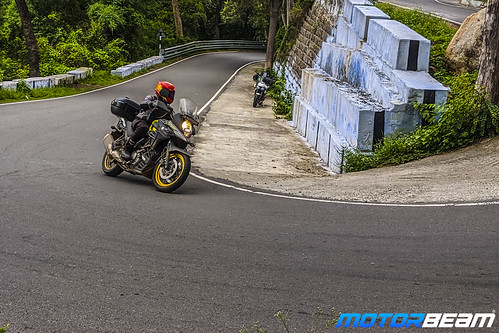 Tipping into corners with a ton of confidence

We reached the top of the hill station and the place was beautiful. The exponential increase in the climb led to brilliant weather too. During the climb, the Street Triple RS was flying while the Ninja 1000 was struggling due to its extra weight. The Suzuki V-Strom handled like a naked motorcycle and it wasn’t far off from the Street Triple RS the whole way up. The longer wheelbase led it to take corners a little wide but handlebar had the best feedback I could have asked for. The tyres, however, weren’t the most helpful as they had about a 1000 kms life left while they had already done over 10,000 kms on the odometer. However, to keep things in control, the traction control on the V-Strom worked to the core and kept me safe from losing the rear.

February 2020 has been a bad month for sedans. We all are aware of the fact that the automobile industry has been suffering since more than a   END_OF_DOCUMENT_TOKEN_TO_BE_REPLACED

KTM releases latest TVC showcasing versatility of the 390 Adventure. Catch All The Latest Videos, Subscribe To MotorBeam So the much awaited   END_OF_DOCUMENT_TOKEN_TO_BE_REPLACED