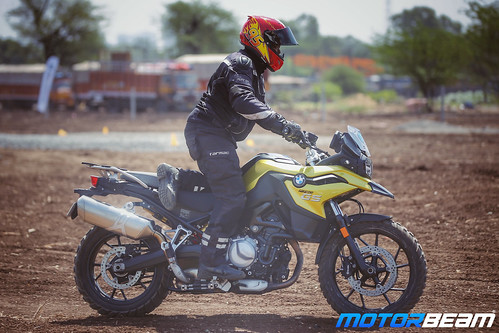 Understanding the body posture while riding off-road is tricky

A lot of people fell as one of the sections was very bad and getting through it was not easy but by the end of it, there was a turn which made it even more challenging. I had a fall too, post which I did use the technique of taking a breather first and then going for the lift. The technique was to keep the back facing the motorcycle and then pick it up. Here, as the back stays straight, lifting over 200 kgs doesn’t feel too bad, pun intended! After this drill, we took some rest as the day got hot and everyone was sweating with the big bikes. During the rest period, we had another classroom session on how to turn the bike around by weighing-in the foot pegs. 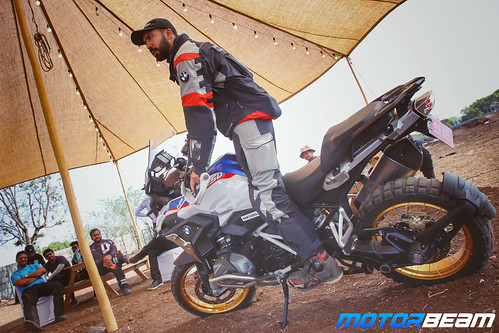 Here’s Shahnawaz showing us where to look while you ride

The next training was like a Slalom test where all the cones were put in a line and we had to ride from one end to another, standing up. Although everyone got along pretty well with the bikes, taking a U-turn was still a task. A slalom drill has a set of cones and we have to move through it like a snake. A few of us got through without falling but weighing the body from one foot peg to another and turning the handle in the opposite direction at the same time became quite challenging. The only way to get through safely was by shifting the vision from one cone to another right before we reach the first one. 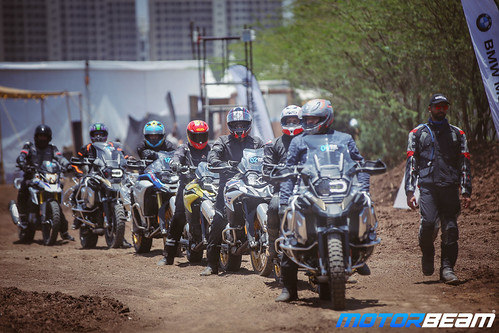 Everyone lined up for the slalom training, each and every bike present from the GS line-up

Riding off-road? Your vision matters a lot – you go where you look and that takes practise

Completing the Slalom became easy as we got to know how to keep the vision right and then we kept switching the body according to the turn. But by the end of it got worse as we had to take a U-turn without putting our legs down. This brought us to our next drill, taking circles within the set of cones. The same technique of vision and body position would be applied but this time we had to lock the handlebar completely left as we did those circles. I was still riding the F 750 GS while people switched between the 1250 and the 850. A few smart ones hopped onto the 310 to have some fun.