The entry-level hatchback space in the Indian market is quite a crowded one. However, none of the hatchbacks belonging to this segment are capable of touching the amount of volumes the Maruti Alto spins, not even the most affordable car in the country. In recent times though, the Alto is feeling the heat from the new bunch of hatchbacks putting a dent on its sales such as the Renault Kwid. Now Datsun is all set to launch the redi-GO with an aggressive pricing in this segment aiming to churn out high volumes. We drive the new Datsun in Kolkata to see how it fares.

Motor Quest: After launching the GO and GO+, the Datsun redi-GO is the latest entrant in the Nissan portfolio targeted against the Maruti Alto, Hyundai Eon and the Renault Kwid. The Datsun redi-GO is based on the same CMF-A platform as the Kwid but comes with revised dimensions and many more changes under the skin apart from the engine and some mechanical parts to keep the costs low. 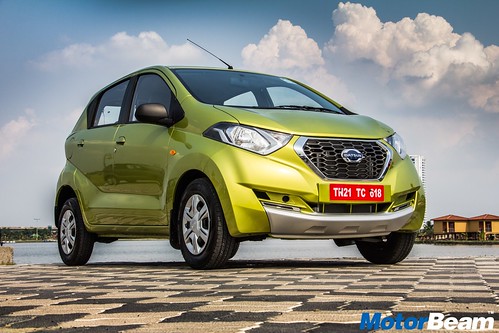 The redi-GO has unique styling cues and looks quite youthful

Exteriors – The Datsun redi-GO looks quite refreshing from the outside with the curvy lines and especially in this bright green colour. The hatchback gets an upright stance with a high ground clearance of 185 mm. The front gets angular headlamps, a wide Datsun grille, raked down bonnet and a sporty bumper that integrates LED daytime-running lights. These DRLs though switch off when you switch on the headlights at night. Also notice the single wiper for the front windshield to keep the costs low. On the side profile there is a deep character line running on the lower half of the body that rises sharply towards the rear and meets the tail lamps. The rear looks a tad simple with the small tail lamps. The tailgate gets a wavy patter and the brawny bumper integrates reflectors. Datsun is offering faux silver skid plates as optional, which adds to the sporty look of the redi-GO. 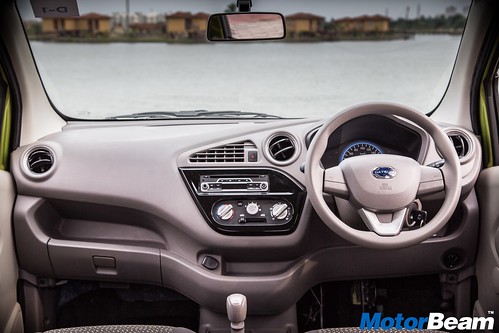 The steering of the redi-GO looks very appealing, dash design is fresh

Interiors – After the last two products, we get to see a drastic change on the interiors of the Datsun redi-GO. Since it has a tall-boy design, the ingress and egress is extremely comfortable. Get inside the cabin and you would notice fresh new styling details such as the three-spoke steering wheel, which looks very nice and feels good to hold. The instrument cluster is basic but easy to read, there is a digital tachometer and a small MID that shows instantaneous mileage, average fuel economy, distance to empty and a new gear shift indicator. On the centre console there is a fixed AC vent on the top that ensures 50 percent airflow to the rear passengers. The air conditioning is good enough for all the passengers. The overall dashboard layout looks neatly done and doesn’t appear basic like its elder siblings. 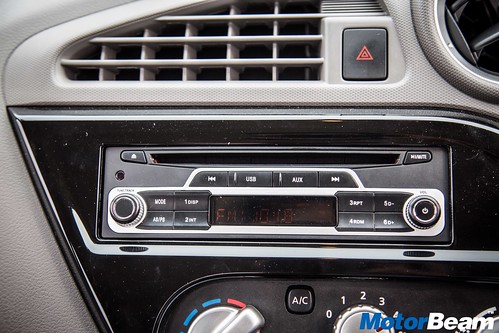 Audio system is quite basic and doesn’t offer Bluetooth connectivity

The equipment levels are basic but cabin feels spacious

There is an integrated audio system in the Datsun redi-GO that offers basic features like radio, AUX, USB and CD. Unlike some of its rivals, the redi-GO doesn’t get Bluetooth connectivity and the sound quality is average too. The lower part of the centre console houses two controls for the front power windows (the rear windows are manual) and two cubby holes. There are some storage bins inside the cabin such as the open space above the dashboard, space to keep your phone below the AC controls and front door pockets that are small and can’t even fit 500 ml bottles. One thing to notice inside the redi-GO’s cabin is the excess of exposed sheet metal that looks a bit tacky. 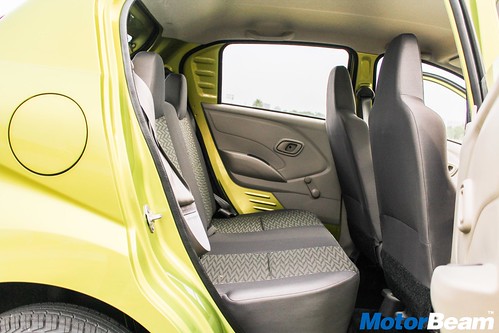 There is good enough legroom and tremendous headroom on offer

The Datsun redi-GO feels quite airy on the inside thanks to the light colour tones used. The rear passengers have lots of headroom, decent legroom for a car this size but the shoulder room for three is a bit tight at the back. Seat cushioning is average, which might get a bit uncomfortable over long journeys. However, the driver has an upright and commanding driving position with a good all-round visibility of the road. The boot space is quite generous having a capacity of 222-litres. 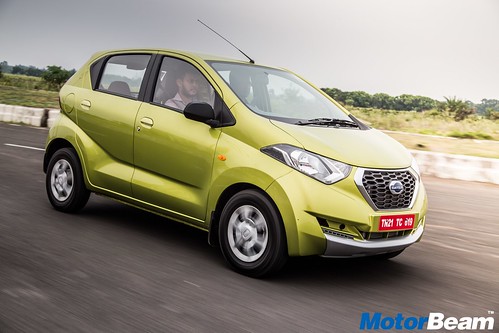 The redi-GO feels peppy once you rev it hard

Performance – The redi-GO shares its engine and transmission with the Renault Kwid. Sitting in the hood is the same 3-cylinder, 799cc petrol engine which churns out 54 PS of power at 5678 RPM and 72 NM twisting force at 4386 RPM. Datsun claims they have tuned the engine to extract more juice from the engine as compared to the Kwid. There isn’t much power to play with in the lower end of the rev band and you really have to accelerate hard to get going, however this engine offers a strong mid and high range. Keep the revs in the mid to high range and you will be able to extract good power from the engine. 3-cylinder engines do have some inherent vibration. The doors and steering have some amount of vibration on idle but it disappears once you step on the gas. 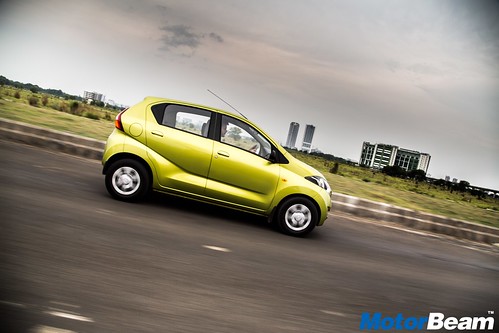 The transmission is slick and has well spaced out ratios

The 5-speed manual transmission offers smooth shifts with evenly spaced out ratios. The first gear tops out at around 40 km/hr, the second just under 80 km/hr while the third will get you doing about 110 km/hr before hitting the rev-limiter. After this the engine loses steam as it has already passed its peak output. Datsun claims that the redi-GO will hit the ton from zero in 15.98 seconds, which isn’t bad for a car in this price bracket. Power feels adequate most of the times but there are times when you would have liked more grunt from the engine. Though a 1-litre engine would have been ideal, Datsun went for the 0.8-litre considering cost and fuel economy. 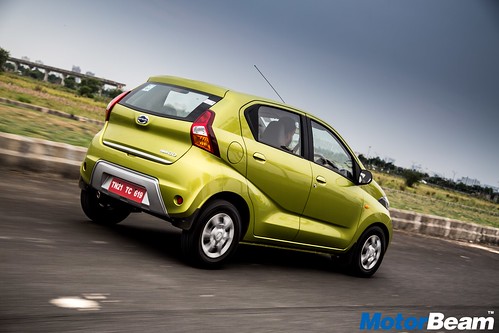 The 799cc is extremely frugal returning a claimed mileage of 25.27 km/l

However, Datsun has said that they will get something new every 6 months and we reckon that it will be eventually getting a 1-litre engine and an AMT. The ARAI certified fuel economy for the redi-GO is 25.27 km/l, which is marginally better than the Kwid. This may be owing to the fact that the redi-GO is marginally shorter (by about, 30 mm) and approximately 25 kgs lighter than its French cousin. We reckon that in the routine driving cycle, one should be able to extract around 15-16 km/l, which is quite respectable. 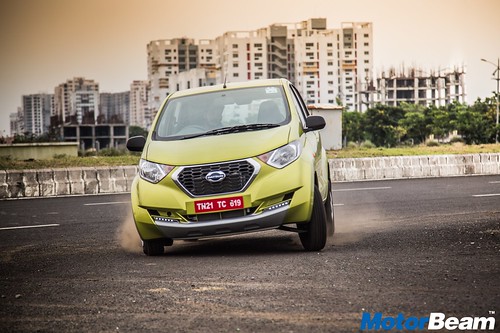 Driving Dynamics – The redi-GO shares its underpinnings with the Kwid as they both are based on the Renault-Nissan CMF-A platform which was jointly developed for low cost cars. Ride quality was quite good, especially at slow speeds and it would filter most of the undulations without transferring them to the cabin. However, large potholes did make their presence felt. The redi-GO also has the segment best ground clearance of 185 mm which ensures that even the tallest speed breaker will stay clear of its underbelly. Datsun claims to have tweaked the suspension to an improved ride quality and we were quite happy on this front. 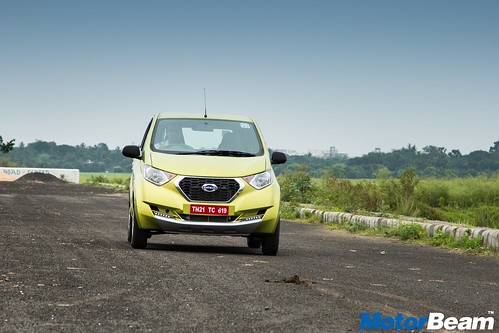 The ride quality is comfortable enough, especially at low speeds

The speed sensitive power steering feels very light at low speeds making driving in the city and crowded areas a piece of cake. The car offers good manoeuvring ability at low speeds and can zip around without much effort. However as you speed up, the steering barely weighs up offering little feedback. Therefore quick change of direction at higher speeds is not recommended for this tall boy, which does have some body roll. For all practical purposes, the handling is quite reasonable and at this price point, you would have to be plain greedy to expect anything more. Datsun has opted for 13-inch wheels with 155/80 section tyres. These will be available throughout the redi-GO range. Datsun claims that the redi-GO has the best braking performance in the segment but we found the brakes to be spongy which end up biting too suddenly. This may be due to the fact that all the cars at the drive came straight out of the factory with barely any kilometres on the odometer. 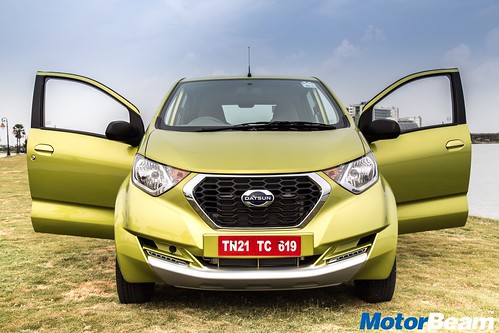 Datsun is promising to offer lowest maintenance cost in its segment

Safety and After Sales Service – Datsun will provide driver-side airbag as an option on the range topping trim of the redi-GO but ABS is not available with the hatchback. Still, the Japanese automaker claims that the redi-GO has the shortest braking distance in its segment and the mechanism is such that the brakes don’t tend to lock early. In terms of after sales, Datsun won’t be the best in its segment but the carmaker is improving the network rapidly across the country and currently has 220 outlets pan India. However, they are claiming that the Datsun redi-GO will have the lowest cost of ownership amongst its rivals. 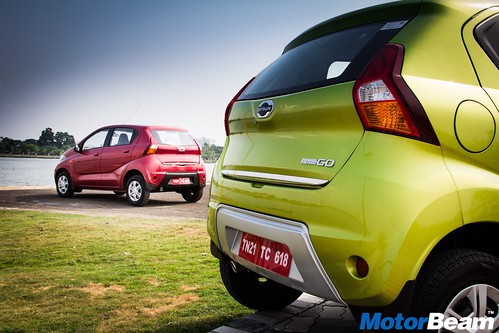 Verdict – The is no denying that the Datsun redi-GO is a very well engineered car and offers a lot to the first time car buyer. The external design is very sporty with some dynamic elements and there is generous cabin space courtesy of a cab forward design. Datsun will also offers numerous customisation options at the dealership level. We know for certain that Datsun will price it very aggressively and will undercut the competition by a good margin. It’s biggest competitor will be its cousin, the Kwid, which, though pricier, feels a little more desirable with its SUV inspired design and more features. Nevertheless, it is the redi-GO, which will offer more value to the buyer and will be a tempting option as a first car. 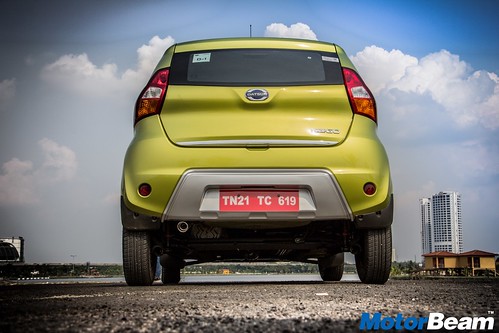 Buyers have the choice of customisation at dealer level

* Sporty and off-beat exterior styling on an entry-level hatch
* Drivability in the city is good
* Interior is quite spacious for a car this size, especially the headroom
* The ride quality is good and comfortable
* The pricing will be aggressive
* Customers will get various customisation options at dealer level

* NVH could have been better, there is a lot of noise creeping inside the cabin
* Exposed metal behind the B-pillar
* Brake pedal bite is too sudden
* The steering feels vague at high speeds 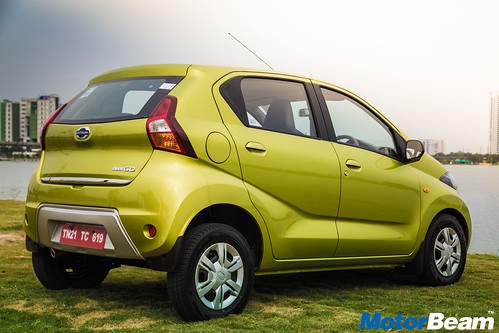 The rear makes the tall-boy hatch design quite prominent