Ferrari’s product planners seem to be quite good mind readers when it comes to generating ideas for a new product or a model line expansion. Ferrari’s engineering team is also accomplished and is able to support the product drive as envisaged. As is the tradition with all modern mid-engined Ferraris like the 458 and its derivatives (458 Italia and 458 Spider), Maranello created a great car, but the question that lingered was something like this: how to keep interest in the car and take it to the next level? In terms of positioning, Ferrari is very clear where it wants this new addition to be: the 458 Speciale has to be the top performing model in the 458 family on all accounts without compromise. 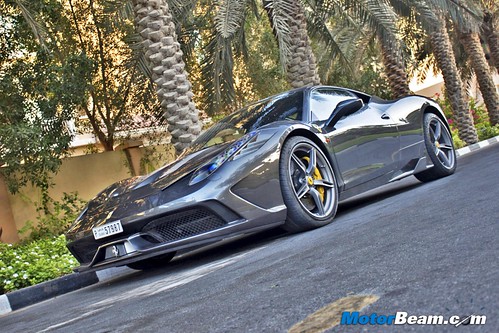 Ferrari focussed more on performance than just visuals, the Speciale makes that obvious

The recipe used in this car is more engineering focused and by this we mean that elements deemed necessary – be it weight saving measures or advanced aerodynamic tweaks among others have being meticulously addressed. The weight saving chapter is quite interesting. In cold climate markets, the car will be offered without air-conditioning and track purists can even order the car without radio or CD player. Giving the Speciale its individualistic visual identity are the new forged wheels, vents in the bonnet, finned side sills, taller rear spoiler and redesigned bumpers. 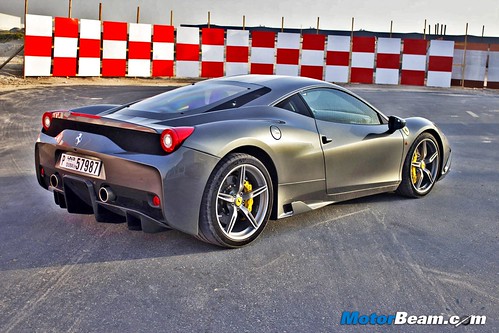 Ferrari has made the 458 Speciale faster by dropping some kilos

The bumpers are also functional and include active aerodynamics designed by Ferrari Styling Centre in cooperation with Pininfarina. They may appear small, but the front and rear movable flaps are specifically designed to balance downforce and cut drag at speed. The 458 Speciale has an downforce (Cl) value of 0.53. Thanks to active aerodynamics, the latter does not penalise the Cd which is just 0.35. Ferrari’s obsession with aero-elements for a road-baised car is at its peak out here. Meanwhile, at the rear, the 458’s triple exhaust tips have been replaced with a conventional set-up placed slightly higher up. 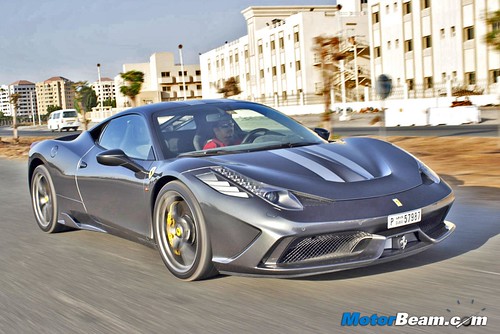 The car looks sinister in this paint job, the yellow callipers stand out

As expected, the spec sheet suggests further optimisation of power-to-weight aspects and as a result, the software managing the engine has been revised along with power bump to 597 HP at 9000 RPM. Torque stands at 540 Nm at 6000 RPM and this makes the mid-rear-mounted 4497cc direct injection engine the most powerful naturally aspirated 8-cylinder which Ferrari has ever developed. Among key engineering challenges besides just boosting power was to improve torque across the entire power curve and this exercise involved increasing the compression ratio to an exceptional 14:1, the highest value ever achieved by a naturally-aspirated V8, which in turn was achieved by cleverly altering piston geometries. 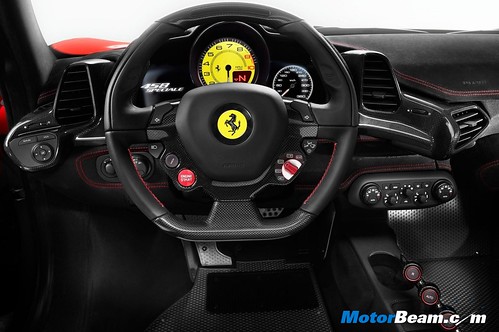 The interior makes one feel special, just like the name of the car suggests

Ferrari has excelled in transforming the road going berlinetta, the 458, into the genuine track focused 458 Speciale

The drive to Jebel Jais mountain route in Ras Al Khaimah is quite popular with the motoring fraternity these days as it allows drivers to extract undiluted driving pleasure – be it a sports car or supercar without penalties. Once settled in, we find that the onboard ergonomics are functional with all controls clustered around the driver and on the F1-inspired steering wheel. This concept has been further enhanced by the use of the iconic bridge, a carbon-fibre wing that extends over the central tunnel section, putting the F1 gearbox controls at an ideal angle to the driver. There is also a comfortable leg rest cushion on the driver’s side of the tunnel. 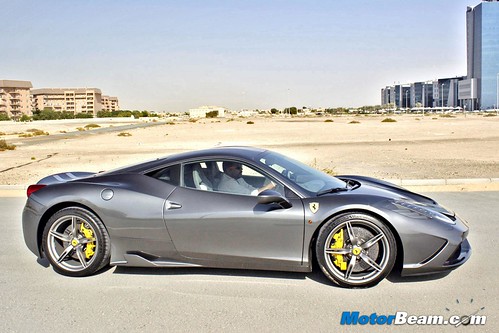 The Jebel Jais winding route which runs for several kilometres offers pretty fast corners in both directions which in turn demands concentration from the driver’s part and complete faith in the car. This car’s chassis set-up is very good even in sport mode which does help a spirited driver to overcome a driving challenge and motivate one to push to higher levels of achievement. We note that the car is at its best behaviour over really twisty routes with demanding switchbacks and camber changes. The car’s Michelin Pilot Sport Cup 2 tyres really do their job well in keeping it in contact with the road. 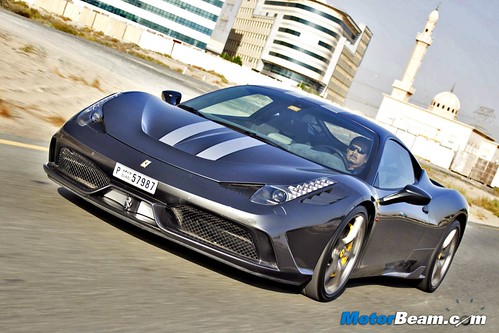 The engine is the highlight, redlines at a mad 9000 RPM and emits an unadulterated note

Thanks to an additional 35 HP and roughly 90 kgs less mass and a retuned exhaust, the Ferrari 458 Speciale is slightly louder than the regular 458. Its 7-speed gearbox is programmed to shift faster, while steering is calibrated to offer quicker turn-in and most of all bigger brakes help it stop shorter. This means, the Speciale is a notch above the car on which it’s based in most departments and on performance/dynamic level, be it in a straight line or around a track. Ferrari has improved on the 458’s sublime chassis with a fresh dose of clever technology and engineering and the fruits of these enhancements are quite evident when you drive the car. 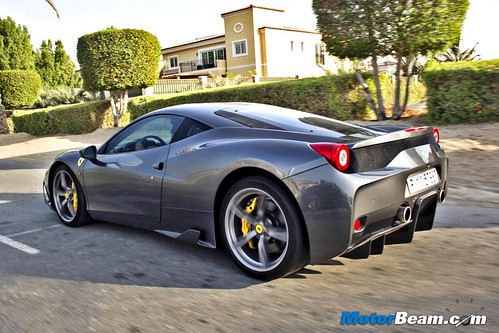 The chassis is super responsive, helping one exploit it to the fullest

Irrespective of whether it’s a regular patch of road or on the track, drivers will surely feel connected with the Ferrari 458 Speciale, thanks to the lightning fast speeds with which it responds to every input and the consequently natural control that it offers. Even in extreme manoeuvres, this finely-tuned handling chassis balance enables the car to reach the highest performance levels of any Ferrari V8 that we have experienced till date. 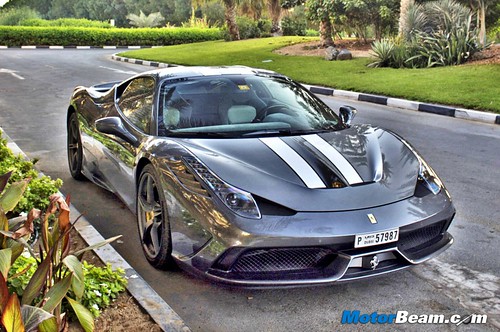 Gears change with super quickness, the gearbox is of course F1 inspired

The F1 dual-clutch transmission is a blast to operate. It now features a new control logic that delivers an even keener sense of urgency during gear shifts. The car feels much sportier as it shifts up through the gears, with response time to commands more prompt than ever, thereby guaranteeing 40 per cent faster longitudinal acceleration with engine revs adapting 20 per cent more rapidly. Conversely with the Fast-Down Shift strategy, when down-shifting, the transient time required for engine revs to match the gear ratio is 44 per cent faster. 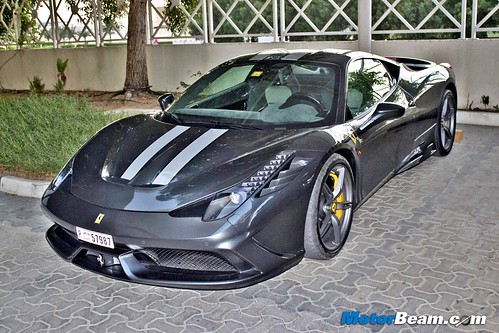 The computers in the car are programmed to reduce the differential locking torque during understeer to liven up the handling. On oversteer, the differential unlocks and F1-Trac cuts engine power to keep the rear end from overtaking the front. The beauty of the programme is that it’s working even when you’re not exploring the extremes of those scenarios and as a result, the Speciale doesn’t overwhelm its occupants on the move with unpredictablity. It remains calm and surprisingly is very smooth even at normal road going speeds which we found pleasantly surprising over the recently tested McLaren 650S. Steering weighted well and basically point and shoot with no questions asked.

The perfect road legal with sharper reflexes Ferrari 458 Speciale joins the Ferrari range alongside the regular fare and like all specially created Ferraris, it is aimed at a specific kind of user. In this case, those looking for more track day type of fun without actually having to go into the cumbersome bolt-on/off process, here comes a perfect factory designed package.