The entry-level Indian crossover market is well segmented into quite a few areas. For those who want a hatchback which is called a crossover, there is the Volkswagen Cross Polo and Toyota Etios Cross, for those who want a crossover with some SUV-ness injected into it, there is the Renault Duster and Nissan Terrano. Right between the hatchback crossovers and compact SUVs sits the Ford EcoSport, a mix of both crossover and SUV. Now the Fiat Avventura is here to take a small chunk in the crossover market from well established rivals. The Italian beast isn’t just a hatchback with muscular body bits, instead, it’s a car which takes on Ford’s best selling EcoSport. We pit them against each other to see if the Punto based Avventura can hold a candle to the Fiesta based EcoSport.

Motor Quest: The Fiat Avventura is a new car which is being solely launched in India currently, it’s in the first generation. The Ford EcoSport was launched in India last year and is the second generation of the hugely popular model whose predecessor was a Brazil only offering. 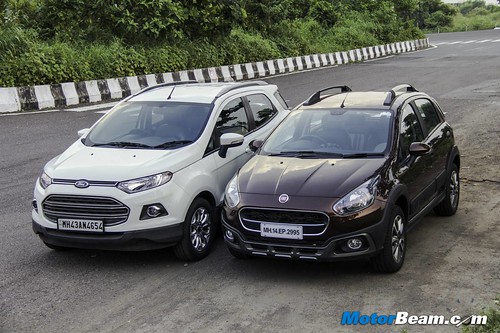 Styling – Both cars duck under the 4-metre length mark but the Ford EcoSport is longer, wider and much taller than the Fiat Avventura. The bigger dimensions are immediately apparent as the Ford looks bigger than the Fiat. However, size aside, the Avventura is the car with the more appealing elements. The EcoSport is quite an appealing car but its design invokes either a love it or hate it feeling. The Avventura on the other hand is easily the better looker with really sharp highlights which make it such a looker on our roads. Both cars run on 16-inch wheels, have roof rails (the one on the Avventura are functional) and use all-round black body cladding. 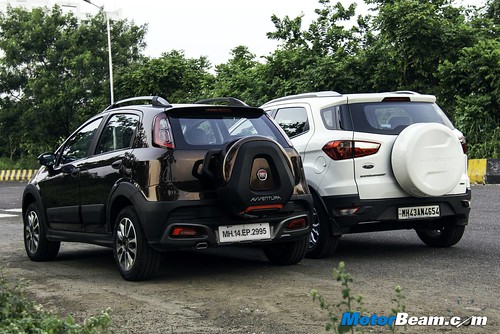 Fiat’s design of cars has always been excellent and the Avventura is no different, there is simply no way you can point something on the exterior to be not attractive. This car manages to turn heads more than the Ford. The tail section of both cars is really good but the Fiat with its gorgeous LED lights and cover for the tail gate mounted spare wheel manages to draw more eye-pops. The EcoSport doesn’t get a cover on the tail gate mounted spare wheel and the tyre can be seen, the cover on our test car did not come cheap at Rs. 12,000/-. So while the EcoSport looks more of an SUV, the Avventura is the more attractive car here.

Interiors – Both cars have big dashboards, the one on the Ford is the bigger unit but the design elements on the Avventura’s dash are more appealing. Build quality is much better on the Fiat as the car feels robust while the EcoSport does have some panels which lack solidity. However, the Ford annihilates the Fiat in all other things. Let’s start with equipment, there is much more on offer on the EcoSport including keyless go, push button start, Bluetooth audio streaming, rear parking sensors and six airbags to name a few. The few extra features on the Avventura are the ambient lighting, rear AC vents and gimmicky meters (compass and inclinometer) which have little use in regular driving situations. So the EcoSport comes with more equipment and the Ford has better ergonomics too but that’s not all as the American vehicle beats the Italian when it come to space as well.

Not only does the Ford have more interior room than the Fiat, it also has better seats and a bigger boot

Both cars have a very similar wheelbase but the EcoSport has more interior room with better knee and legroom at the rear along with much better headroom as well, it also has the bigger boot which is much easier to open too. The Fiat is a nice car to be in but the EcoSport is just better and aiding comfort of the rear passengers are adjustable rear seat headrests and a seat which can be reclined a bit. The seats on the EcoSport are better and there are more storage bins in the Ford so the cabin is more practical too. The wipers on the Avventura are better (there is also a delayed swipe) and so is the headlight illumination. The EcoSport does manage to beat the Avventura with ease in the interior department with higher equipment and more space. However the Fiat has quite a lot of features on the lower trims (all variants get 16-inch wheels with alloys, etc). 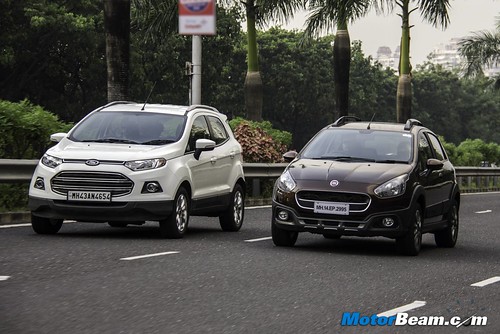 The EcoSport manages to beat the Avventura in performance, it has better engines

Performance – While Fiat offers two powertrain options on the Avventura, Ford offers three including the multiple award winning 1.0-litre EcoBoost engine. With the pint sized motor under its hood, the EcoSport’s performance and efficiency is simply unmatched. The DV5 mill generating 125 PS and 170 Nm, returning a terrific claimed mileage of 18.9 km/l. Fiat should have offered the 1.4-litre T-Jet motor on the Avventura as it would have been a good rival to the EcoBoost engine powering the EcoSport. The other petrol engine offered by Ford on the EcoSport is the 1.5-litre Ti-VCT unit that outputs 112 PS and 140 Nm. In comparison, Fiat’s 1.4-litre FIRE unit produces 90 PS and 115 Nm. 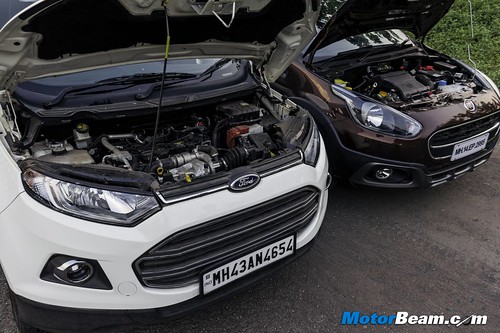 The petrol Avventura is lighter than the petrol EcoSport but with much more power on tap, the EcoSport offers better performance. Not only does the Ford feel quicker, it also pulls stronger and has the better mileage here. Ford offers both a 5-speed manual and a state of the art 6-speed dual clutch PowerShift automatic gearbox on the 1.5-litre engine, the ARAI figures are 15.8 km/l for the manual and 15.6 km/l for the automatic. In comparison, the petrol Avventura returns 14.4 km/l which is surprising as it has lesser power and torque than the EcoSport while also weighing lesser. The gearbox on the EcoSport is better too. 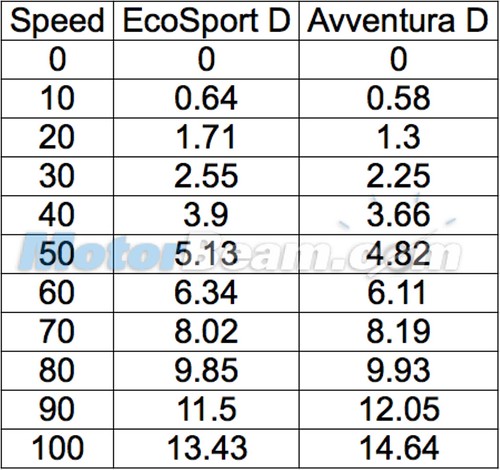 Things are more evenly matched when we consider diesel engines of these cars. The diesel Avventura belts out 93 PS and 209 Nm from its 1.3-litre Multijet motor. Meanwhile the EcoSport’s 1.5-litre TDCi mill generates 91 PS and 200 Nm. As evident, the EcoSport’s diesel engine has lesser output than the Avventura but somehow the Ford has more punch and is faster too. Performance of the EcoSport is better than the Avventura, the Ford feeling more smooth to drive with better punch for city drivability. When accelerated flat out, the EcoSport easily beats the Avventura in the 0-100 km/hr sprint, taking 1.3 seconds less. This advantage further stretches as the EcoSport is quicker to 130 km/hr by 3 seconds. The top speed of the Ford is higher too. 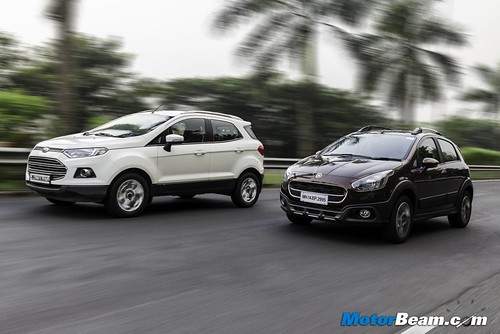 The gearbox on the EcoSport is better too, the Ford just has the better powertrains

There is much less of lag on the EcoSport compared to the Avventura, making the Ford the more lively car of the two which helps in both city and highway driving. Both cars are mated to a 5-speed gearbox and the one on the Ford car is better. The clutch is lighter on the EcoSport and although there is no dead pedal on the Ford, the pedal placement is better (the Avventura has a dead pedal but when you clutch, you hit it). The diesel EcoSport weighs more than the diesel Avventura and in spite of that the Fiat has the lesser mileage of 20.5 km/l compared to the EcoSport’s 22.7 km/l. Petrol or diesel, the Ford EcoSport has better performance while also being more frugal (with a higher range as it has a 7-litre bigger tank) than the Fiat Avventura. 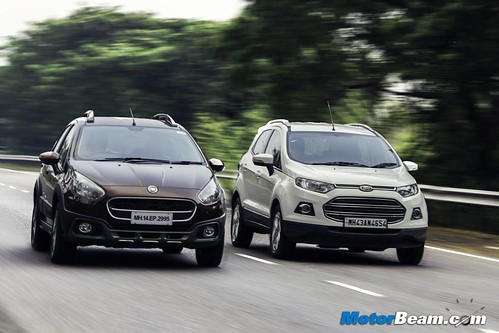 Fiat continues to excel in the dynamics department, the Avventura handles better here

Driving Dynamics – Ford cars are known for their dynamics and the same is true for Fiat cars too. However, the EcoSport isn’t your regular Ford because it doesn’t have the same ride and handling balance as other cars from the company’s stable. The Avventura on the other hand lives up to the Fiat name. Simply put, the Italian crossover has a better ride and handling balance than the American vehicle. Both cars have good body control but the Fiat is more eager to turn in and the tyres on the Avventura are much better too which keeps you glued to the roads at all times. 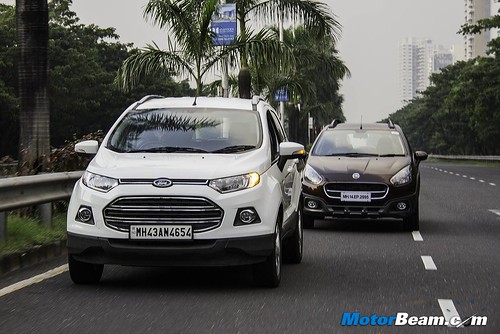 When it comes to ride quality, stability, braking, the Avventura beats the EcoSport

Even on the ride quality front, the Avventura just beats the EcoSport hands down. The Fiat glides over bumps where the EcoSport can get disturbed easily. High speed stability is better on the Fiat and so is the steering feel and feedback which is a gem. Ford uses an electric unit on the EcoSport (making the steering lighter at low speeds) while Fiat continues to use a hydraulic one (now you know why the Avventura with less weight and less output is less frugal). Braking performance on the Fiat is better too and that’s largely due to the fantastic tyres which ensure supreme grip at all times. The higher weight and taller height rob the EcoSport from coming close to the Avventura in driving balance. Neither cars can off-road but the EcoSport has fantastic water wading capability while the Avventura has 5 mm more ground clearance. 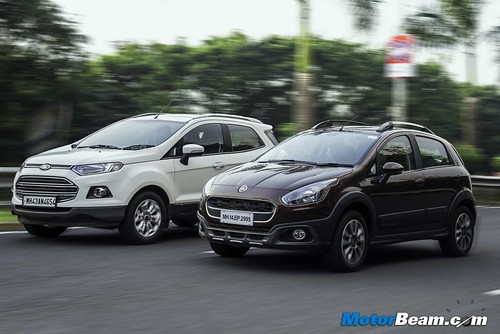 Safety and After Sales Service – The Ford EcoSport received a 4-star rating from Euro NCAP while the Fiat Avventura is yet to be tested. However, the Punto has received 5-stars and the Avventura is based on it. The EcoSport gets side airbags on the top trim while Fiat makes do with only dual front airbags. Service quality of Ford is better than Fiat but the latter is putting up an extensive network. Still, Ford has the bigger network between the two. Some parts on the EcoSport should be cheaper as Ford uses child part strategy which prevents full replacement of parts thereby saving cost of repair. 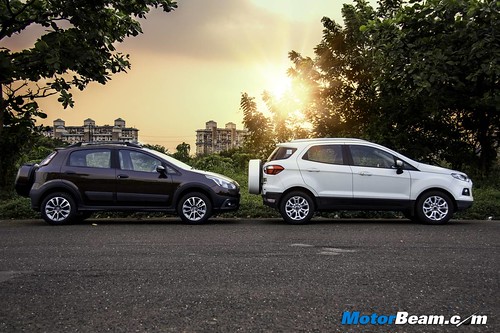 Verdict – Between the Ford EcoSport and Fiat Avventura, both cars excel in various parameters. The EcoSport wins the interiors and performance rounds while the Avventura wins the exteriors and dynamics rounds. As an overall vehicle though, the EcoSport just manages to be better as it’s a more complete package and more convincing as a compact crossover/SUV. Fiat will price the Avventura aggressively, offering it for much cheaper than the EcoSport. Yes the Avventura is the more desirable car here and considering it will offer a lot of value, we finally have a genuine alternative to the popular EcoSport.

The Fiat Avventura is a very appealing car with sharp dynamics and a splendid ride quality, it’s only let down by its engines which don’t have the same punch as the competition. The EcoSport is the better car but the Avventura is a splendid effort which makes for an excellent alternative to the Blue Oval. 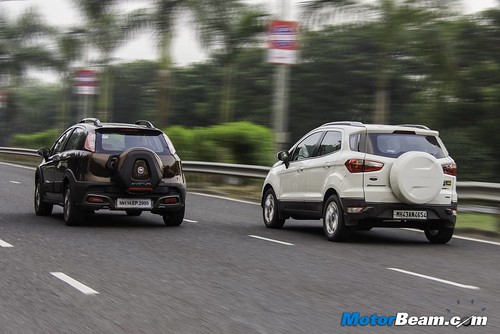 Is Fiat Avventura The Best Hatchback Based Crossover?