Performance and affordability were two sides of a coin for Indian enthusiasts as one really had to break the bank to get something fast and fun. Not anymore because for bikers, the KTM Duke 390 changed everything while the recently launch Fiat Abarth Punto brings respite to car lovers. Now this might sound ridiculous as one is a heavy car and the other is a light bike but what’s common between both is their penchant to go fast. How do these two performance game changers fare against one another?

Motor Quest: KTM launched the Duke 390 in India in 2013 while the Fiat Punto Abarth was launched in 2015. The Duke 390 is only offered in one variant, in two colours while the same is true for the Abarth Punto as well. 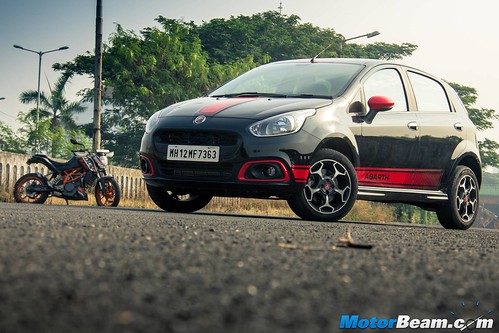 Both these vehicles are pure muscle in every way

Styling – If attention is all what you seek, the Duke will disappoint you because the design simply won’t catch eye balls. It’s not that the KTM isn’t good looking but one really has to be a naked bike lover to appreciate the minimalistic panels and that orange coloured frame and wheels. One can sit next to the orange machine and just stare at the tasty hardware bits like the white coloured WP suspension, gloss black finish on the front upside-down forks, exposed trellis frame, orange wheels, aluminium swingarm and the list can go on and on. 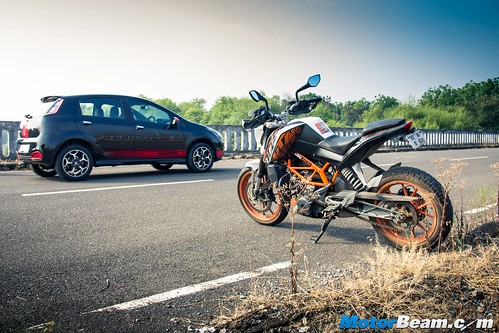 While pure visual drama for enthusiasts, the common man won’t notice either

In contrast, the Fiat Abarth Punto has the show to grab attention quickly with those Scorpion wheels, red graphics and sporty body kit. The replacement of the Fiat logo with that of Abarth is just the icing on the cake. However, some might find the graphics a bit over the top on the Punto Abarth and even though it is based on the regular Punto, this car still attracts attention for one big reason, low sales of the model, making it quite exclusive on our roads.

Instrument Cluster and Switchgear – Step inside or in the case of the 390, step onto the saddle and neither has appreciable ergonomics. While the car has the steering too close to the chest, the bike’s upright riding position isn’t that generous on the shoulders and upper back. But the Fiat will carry 5 in comfort while one has to be brave enough to carry a pillion on the Duke. That said, the KTM’s console is much superior to the Abarth’s, displaying the kind of data which even cars thrice the price of the Punto don’t offer. 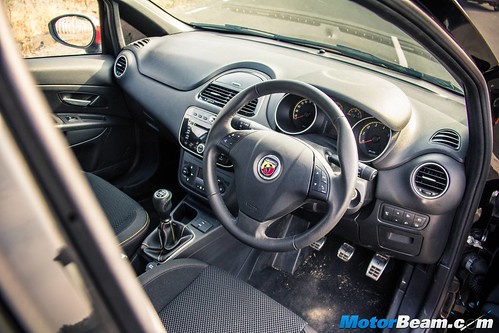 Being a car, the Punto Abarth is without doubt more comfortable

Ergonomics – This section is pure pointless because one is a car and is thus naturally more comfortable with the bucket like seats which give good back support. The pillion, or rather the co-passenger, is also quite comfortable thanks to option of controlling weather and not fearing the sun or rain. On the bike though, one is exposed to these elements and of course pollution too but you sit on the motorcycle which makes you one with the machine, that certainly sounds more exciting to us, no? 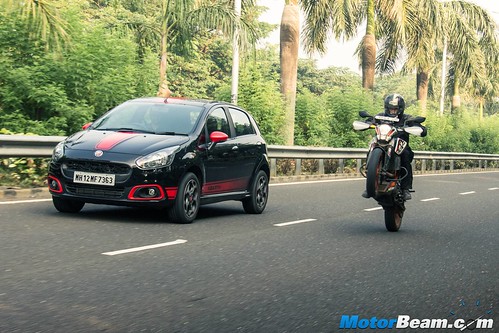 Performance – There is a world of a difference between the performance of these fast machines, the KTM drawing power from a 373.2cc single while the Abarth’s force fed 1.4-litre mill packs in more than thrice the power at 145 HP. Torque output too is superior in the 4-pot mill with 200 Nm. The Duke 390 might just output 44 HP and 35 Nm but the light weight makes it much quicker in the 0-100 km/hr sprint, taking just 5.6 seconds against the Italian beast’s 8.98 seconds. The KTM continues to out accelerate the Fiat till it hits its top speed of 170 km/hr while the Punto will head onto a top whack of 190 km/hr. 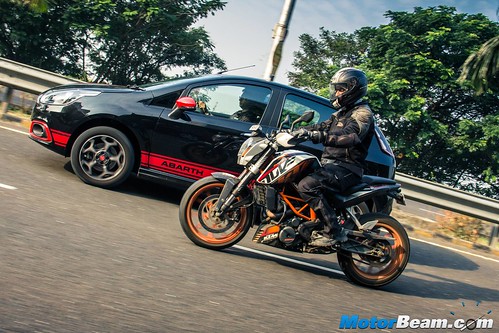 With more cylinders under its belly, the Punto Abarth is a more refined vehicle

But the character of both vehicles is similar as one likes to keep one wheel up while the other likes to spin its front wheels in glee all the time, smoking incessantly. The mid-range punch is similarly outstanding in these machines with the top-end putting a big grin on the face of the pilot. The 1400cc motor is much more refined than the 390’s and the former also boasts of better overall NVH, it sounds better too near its 6500 RPM redline while the Duke’s limiter politely governs things at 10,500 RPM. 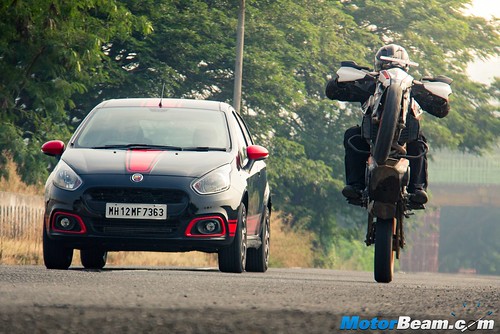 The Punto loves to spin its front wheels, the Duke stands up

The KTM’s 6-speed box is slicker in shifts compared to the Fiat’s rather rubbery 5-speed transmission but the table turns when one talks about clutch feel although the Duke 390 gets a slipper function, the Punto Abarth actually doesn’t need one! Both these automobiles have an appetite to drink so drive them the way they are supposed to and you will get under 6 km/l in the Fiat and around 18 km/l on the Duke, there is never a free lunch! 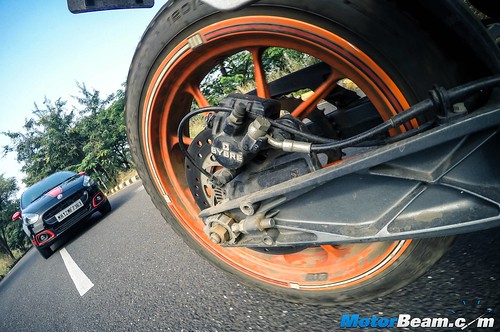 Dynamics – Show these vehicles a series of corners and they totally light up by offering splendid handling, thanks to their stiff suspension. The Duke feels nimble thanks to its low weight, the Metzelers offering stellar grip while the heavier Fiat is super composed around the twisties offering splendid control and precise feedback from the hydraulic steering. The 390 too has a feedback rich steering but the Fiat’s is super communicative. Both get all wheel discs and ABS but the Duke could do with better initial brake bite while the Punto definitely needs better tyres. 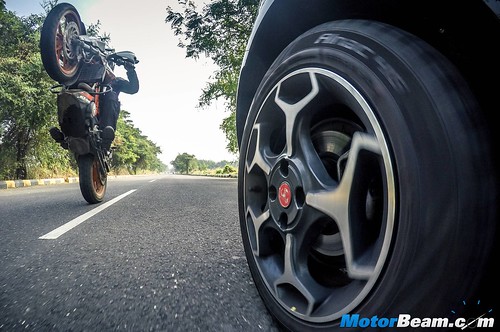 The Fiat loves to drift and has a much better ride quality than the Duke, the Abarth feeing more stable as windblast is a non issue for the car. One can duck down as much as possible (at the cost of visibility) on the Duke 390 and manage to reach its top speed quicker, no such advantage in the Punto Abarth so the lack of mystery can be a bit boring. 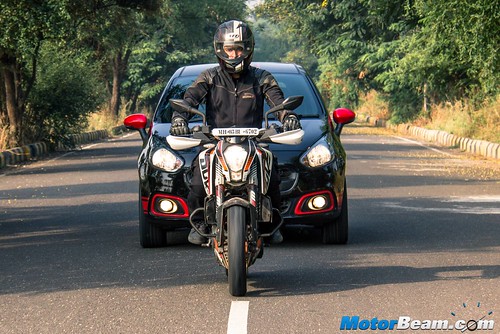 We all know who emerges ahead in this unconventional shootout

Verdict – Different strokes for different folks, that’s how we sum up these awesome performance machines. Saying one is better than another is impossible because both offer hair raising thrills at a price which isn’t out of reach, thanks to both being manufactured in India with local content. The Duke 390 is cheaper, faster and can aim at the sky or tip into a massive lean, while the Fiat is an attractive Italian offering fun performance and comfort at the same time. Tough choice this but both the KTM and Abarth are pure unadulterated fun and that’s something impossible to match at this point. European machines for the win! 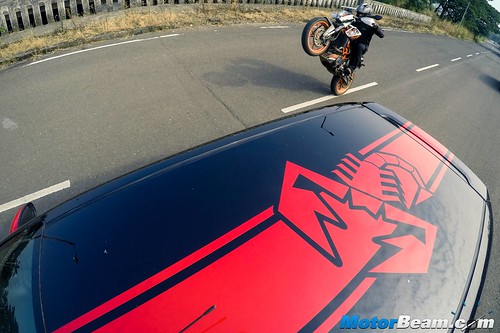 That roof and graphics on the Punto Abarth are eye catchy

“On one side is a tarmac scorching performance hatchback while on the other is a fast street-fighter. The Punto is a driver’s car like no other, its affordability playing to its advantage but so is the Duke 390 as it too is fast, fun and light on the wallet. If I had to buy either one of these, I would fight and fight till I get both because Fiat and KTM in a garage is a performance match made in velocity.” – Faisal Khan, Editor, MotorBeam.
“For me, being a car guy, it’s a no brainer that the Punto Abarth is the one I would pick. Bikes are boring (did I just say that) and in spite of having access to a KTM 390 Duke 24/7, I haven’t ridden it even once. The comfort and grip on 4-wheels is just another feeling but that said, the hype created by the KTM Duke 390 does seem justified when I see the price and acceleration numbers.” – Javeid Khan, Deputy Editor, MotorBeam.
“I am a bike guy, give me any bike, even a Hero Splendor and I would take it up over a car. Speed is one thing but as the age old saying goes ‘4-wheels move the body, 2-wheels move the soul’ and thus I would rather ride than drive. Among these two offerings, the Duke 390 has my interest because not only is it faster, sharper, sexier but also much cheaper to buy and run.” – Dhanil Vira, Road Tester, MotorBeam. 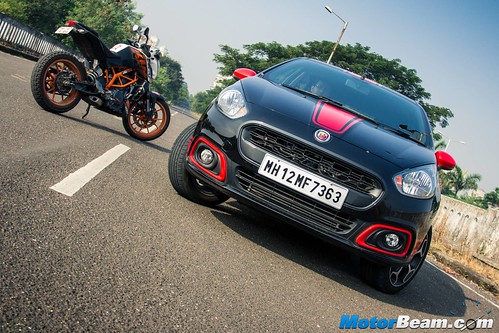 Which of these pocket rockets would you choose and why?