It’s American, red (ok, Ruby Red but still close) and is a sub 10-second car. I am not talking about the Ford Mustang here but the Ford Aspire which is as much of a performance car in India right now for the money that the Mustang was in its early days. And while 100 PS might not sound like much when many cars are producing more, it’s how the power is delivered that matters. Case in point is the video below as two 100 PS cars take on each other in a quarter-mile drag race and it’s quite evident that the Aspire does more justice to its spec sheet.

As you can see in the video above, the Ford Aspire offers terrific performance. I can keep on praising the 1.5-litre diesel motor endlessly, as the 215 Nm of torque comes in a linear manner, enough to make you believe you are driving something with a much bigger engine. It’s only when you stop at the fuel pump that you realise you have done almost 650 kms on a single tank because the car is returning us 16 km/l even after driving with a very heavy foot, 80% running being in the city. Out on the highway, the fuel economy number can stretch to almost 20 km/l. 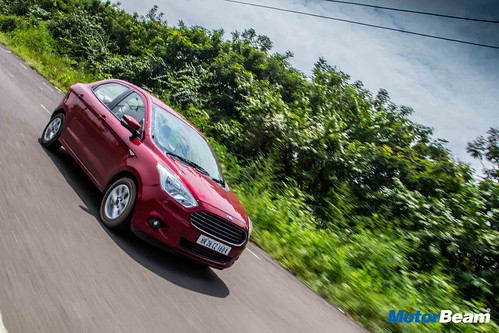 What makes the drive experience so good is the fact that the gearbox is slick shifting, the clutch is light, there is no turbo lag, power delivery is linear and yet there is a kick in the pants feel at around 2000 RPM when the turbo builds up strong and the acceleration pins you back in the seat. Imagine getting this feeling every day you drive because the lightness of the car ensures a terrific power to weight, to put it into numbers, 100 km/hr comes up in 9.72 seconds and before you know it, you are doing 100 miles per hour. 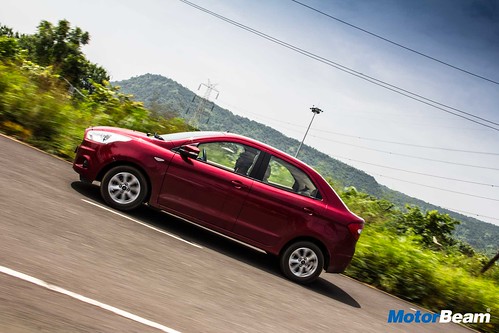 The Aspire is so much fun behind the wheel, yet it’s a family sedan

However, all this power isn’t of much use hadn’t it been for the fantastic control of the chassis. The steering is responsive, light to twirl at low speeds and weighs up well at high speeds, the car remains glued to the road in a straight line while around corners, you do miss wider rubber. The tyres are just adequate for the kind of thrust the Aspire diesel has to offer but on the flip side, it quite makes up for it in the ‘kitna deti hai’ game. 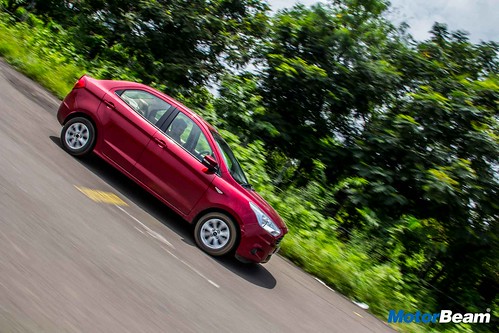 The ride quality although stiff, is still very compliant

The post-monsoon condition of Mumbai roads is terrible so the good ride of the Ford Aspire is a boon but there is a catch. Speed-breakers made without any thought have to be carefully tackled, so is the case when exiting a mall parking because the downslope is so much that the under bumper flap touches. But the aero efficiency offered is a bigger boon than saving the undersides of the car on bad roads as the Aspire has great body control and stays planted through long sweepers.