The compact sedan segment is a heated battlefield with India’s top selling car being a compact sedan. The demand is there and so are plenty of rivals, fighting in this space. Ford launched the second generation Figo with the compact sedan Aspire in 2015 and it has done decently for them, although it deserved better sales. There were a few things missing and the petrol engine was quite lacklustre, the American car maker has now resolved both of these and also reduced the price of the car, making it a great proposition. We drove both the petrol and diesel manuals in hot, dry and dusty Rajasthan to get a feel of the facelifted model. 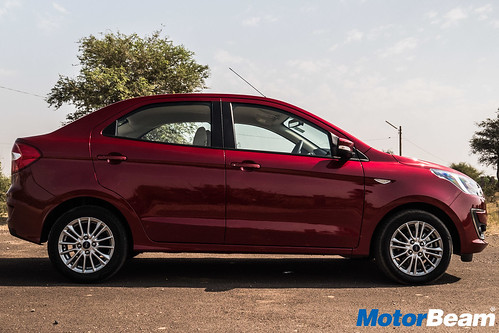 Exteriors – The Ford Aspire now comes with smoked headlamps, however, there are no projectors or DRLs in this car. It gets a chrome surrounded grille with a small Ford logo over it. The front bumper now looks even sharper and it gets a black fog-lamp housing with a chrome insert, while the rear gets a small change in the design with faux air vents on either side. On the side, there are no updates except the new 15-inch multi-spoke alloy wheels on the Titanium trims. The Ford Aspire looks fresh now and the proportions look balanced in spite of the truncated boot (the Aspire that is exported is over 4-metres in length). 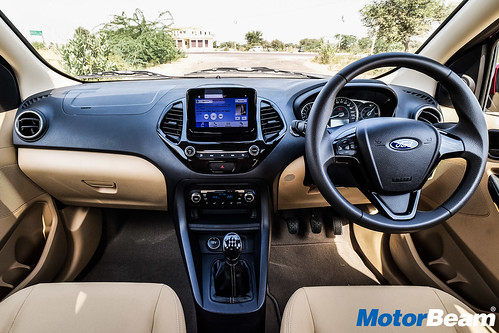 Airy cabin thanks to dual-tone treatment, front door pockets are quite big

Interiors – As you step inside, you will notice the new 6.5-inch touchscreen infotainment system with both Apple CarPlay and Android Auto connectivity. The centre console looks neater now as the massive onslaught of buttons has been removed in lieu of the slick Sync 3 system (even lower models get a touchscreen and not the el-cheapo mobile docking system). The equipment list remains the same as earlier with a few more features, it now gets auto-dimming cabin mirror, reverse parking camera, reverse parking sensors, automatic headlights and automatic wipers. The car also comes with push button start and both the sun visors now get a mirror. There are two USB ports right ahead of the gear lever. 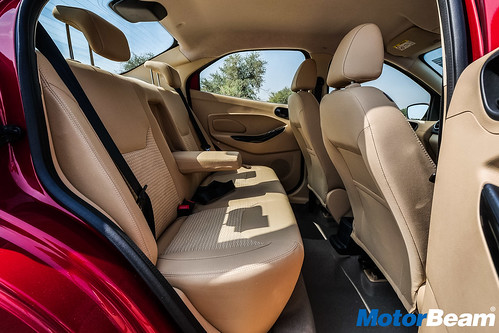 No change whatsoever at the rear, door pockets would have been nice

The Ford Aspire offers decent amount of legroom and headroom on the rear seat, however getting three adults in the rear isn’t easy due to the width of the car, Ford knows that and hence there are only two adjustable headrests at the rear, there is a centre arm rest too but that gets no cupholders, neither do the door pads. The seat back is scooped out, there are magazine holders behind the front seatback and the only cupholder for rear seat passengers is the one in between the front seats. The Aspire gets a new key which has boot release on it, imperative as there is no electromagnetic tail gate opener. The car also misses out on a passive entry system which could be added in the near future.