Since the time the Ford EcoSport was rumoured to enter India (November 2011) till today, we have carried 67 posts on the vehicle including text and video reviews and a comprehensive comparison with its arch rival, the Renault Duster. The EcoSport has been very delayed and prospective buyers are quite frustrated with this delay. However Ford hasn’t delayed the car intentionally, the American automaker has been working aggressively on localizing parts and components so it can price the Ford EcoSport very aggressively, preventing it from the pricing blunder which happened to the new Fiesta.

Bookings for the Ford EcoSport is finally open, this time officially, which signifies the launch is very near. One can book the EcoSport at a Ford dealer for Rs. 50,000/- while some dealerships are asking for Rs. 1 lakh as booking amount (Ford should take quick action against such practise). Even before the launch some dealers are quoting a waiting period of 1-3 months. While the launch date is yet to be announced, we can expect the company to put its compact SUV on sale on either of the following dates of June – 20, 21, 24, 26 or later.

Some dealers are saying the launch could take place on 25th June, but considering the KTM Duke 390 and Mercedes-Benz E-Class facelift arrive on the same date, it won’t be a wise move by Ford to launch the EcoSport on the same day as the vehicle won’t get complete media attention. The 1.0-litre EcoBoost engined EcoSport will not be abundant in supply as the 3-cylinder turbocharged motor is imported. Ford knows diesel rules the roost and thus the diesel EcoSport will be kept in high supply. Majority of the cars will be painted in the flagship ‘Mars Red’ colour.

Ford Brazil has given the EcoSport a new feature. While the Indian spec model let’s you unlock the doors/boot and start the car without using the key (available on Titanium and Titanium + variants but not on the AT), one can open the windows using the key on the Brazilian model. The American car major will add more features to the EcoSport over the years and the mid-life facelift is expected to come in 2016. Ford is betting big on the EcoSport and plans to sell it across the globe, making a slew of variants at its Chennai facility for the export market. 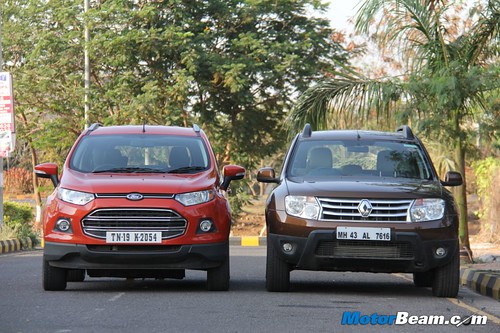 While the sales are extremely low, Maruti keeps the top spot. The May 2020 hatchback sales are quite terrible to see. Usually the sales are 10   END_OF_DOCUMENT_TOKEN_TO_BE_REPLACED

QJ SRK 600 is a Benelli TNT 600i under a new Chinese brand. While Benelli is an Italian motorcycle brand, it is now owned by Zhejiang Qianjiang   END_OF_DOCUMENT_TOKEN_TO_BE_REPLACED