The DZire might be the top seller but the Figo Aspire has a lot going for it, including performance & safety

The compact sedan segment is booming and new entrants are coming in quick. The number of options in the sub 4-metre sedan space has increased drastically and there are so many models on sale from global car makers that it actually comes as a surprise. What is the surprise part one may wonder. It is the fact that these pseudo sedans are India specific because no where else in the world are customers interested to buy such a body style, most prefer a premium hatchback instead. However in India, the demand is too high to ignore this segment. The latest entrant in this space is the Ford Figo Aspire and we have already pitted it against all other cars in its segment, other than the segment leading Maruti DZire. Is the American compact sedan better than India’s top selling car? 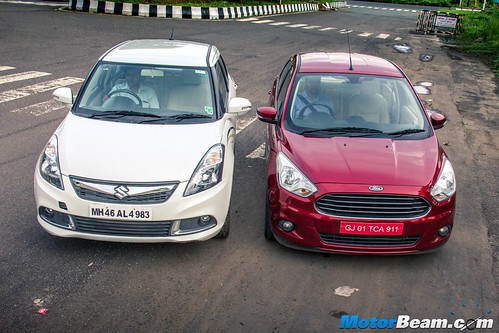 Styling – The biggest issue with compact sedans is the way they look because every model is a hatchback which has been modified to incorporate the third box, thereby making the vehicle look like a sedan. The result is the boot seems like an after thought and the same is true for the Maruti DZire which does have ungainly proportions. With the recent facelift, Maruti has indeed induced some freshness in the car but it’s far from being a looker as its design flow isn’t natural and the boot does seem out of place on what is otherwise a Swift at the front and most of the side. Meanwhile, Ford has done a fantastic job with the Figo Aspire which doesn’t have any design compromise at all, the third box being a natural fit on this American vehicle. 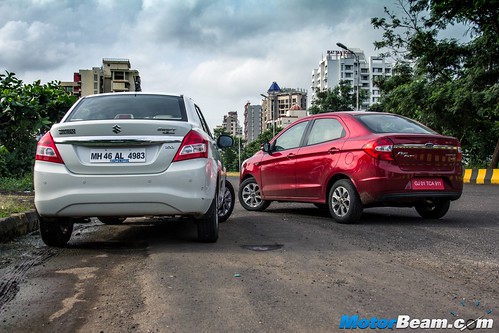 The boot on the Figo Aspire is much smoothly integrated, doesn’t look out of place

What makes the Ford Figo Aspire such a looker are the nice design bits like the Aston Martin inspired front-end and the rich paint job that does give the car a strong presence. Neither Maruti, nor Ford have refrained from adding chrome on their cars but it’s more subtle on the Figo Aspire while the Swift maker has used chrome to boost the premium quotient of its sub 4-metre sedan. Being the newer car here and also having a more cohesive design, the Figo Aspire is not only better looking than the Swift DZire but also the best looking car in the compact sedan segment.

Interiors – Both cars use dual-tone black and beige interiors with the seats finished in beige colour for that airy feel, the said colour also associated with premium appeal in our country. The dashboard design on the Figo Aspire looks more appealing than the older DZire but the Maruti has a better instrument cluster as it’s much bigger than the one on the Ford. It’s almost even when we factor in equipment as the DZire has some features which the Figo lacks and vice versa. Maruti has given its Swift based sedan a push button start, keyless go, electric folding rearview mirrors and reverse parking sensors. Meanwhile, the Figo Aspire gets Sync with voice commands, AppLink and Emergency Assistance, side curtain airbags, MyKey, leather seats and gear shift indicator.

Both cars get very comfortable front seats while the ones at the rear are better in the Figo Aspire. This is where the Ford trumps the Maruti easily. Not only does the Aspire have more legroom but also boasts of better knee room and headroom, it also offers a better rear seat experience courtesy of the larger windows. The Figo Aspire also has more storage bins on the inside with large door pockets while it also has the bigger boot, having a capacity of 359-litres against the DZire’s 316-litres. Both cars have good quality although there is certain areas of cost cutting on the Figo Aspire (like the lack of vanity mirror on the sun visor and finishing inside the boot) but build quality is superior on the Ford. 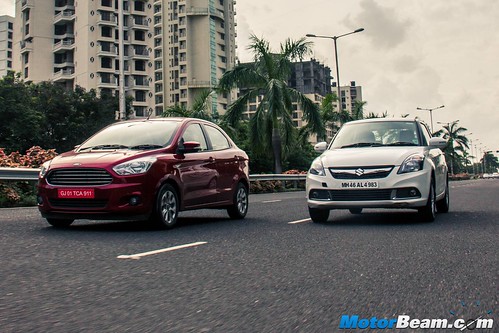 Performance – Both these cars are offered with petrol and diesel engines with Ford offering two gasoline options. The 1.2-litre Figo Aspire outputs 88 PS and 112 Nm while the DZire’s petrol mill generates 84.3 PS and 115 Nm. There is a vast difference in the petrol powerplants of these cars and although both have good low-end performance, the Figo Aspire more so, it just lacks mid and top-end punch where the Maruti DZire truly excels. The K-Series unit is a rev happy motor and also sounds sweeter than the Ford, making it the better engine of the two, the DZire also beats the Figo Aspire in mileage, returning a km/l more. Both cars have a smooth shifting 5-speed manual gearbox and a light clutch. 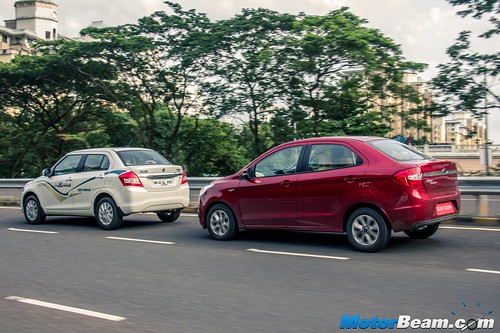 Maruti Suzuki also matches the 1.2-litre petrol powertrain to a 4-speed automatic gearbox which is good enough for the job but completely lacks excitement while Ford offers a more powerful engine for the petrol automatic, it’s the 1.5-litre Ti-VCT unit that develops 112 PS and 136 Nm, paired to a 6-speed dual-clutch automatic gearbox. Thus between the automatics, the Figo Aspire not only offers better performance but crisper shifts too and doesn’t rob away the fun to drive element which the dated 4-speed auto does in the DZire. The Ford’s state of the art automatic gearbox makes it the more frugal car of the two. 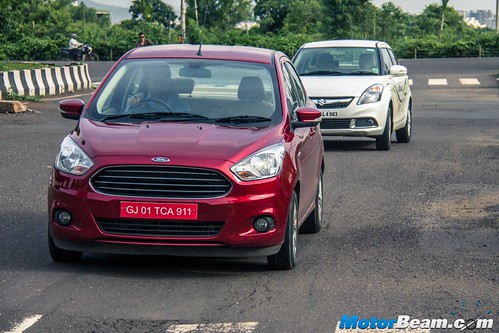 Coming to the diesels, Maruti Suzuki employs the now ubiquitous 1.3-litre MultiJet motor in the Swift DZire that outputs 75 PS and 190 Nm while the Figo Aspire is much more powerful, thrusting out 100 PS and 215 Nm. The Ford oil burner has so much more performance on tap, having a better low-end than the Maruti, resulting in better city drivability. Unlike the Fiat sourced mill, the DuraTorq unit isn’t very fast revving and top-end isn’t as strong as the DZire but the Figo Aspire is a whooping 4 seconds faster in the 0-100 km/hr sprint, it also has a higher top speed. Both cars have slick shifting 5-speed manual transmissions but the Figo Aspire has a lighter clutch and fuel efficiency is on par for both and they return close to 18 km/l. 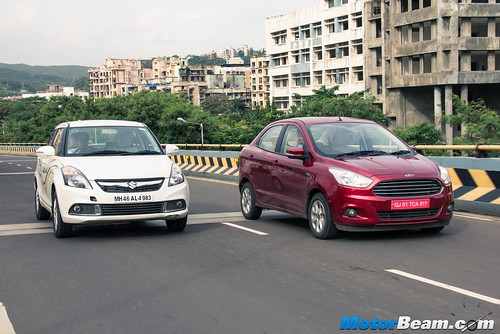 Driving Dynamics – With the DZire being a Swift underneath, its handling is praise worthy but when you have a Ford on the other side, things don’t look so bright for this Maruti. This is because although the Maruti DZire has good handling and steering feel, the Figo Aspire just beats it fair and square by offering better handling, more steering feel, higher feedback and better body control, this in spite of using smaller tyres. The American car’s advantage can be attributed to the superior chassis and suspension tuning. 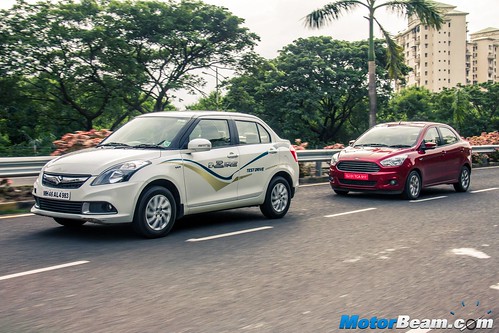 The Ford also rules when it comes to stability, braking and steering feel

The Ford Figo Aspire is also the more stable car of the two and also beats the Maruti DZire in terms of ride quality, the car with the Blue Oval doing a better job of tackling the bumps of our bad roads. The Figo Aspire also has the better brakes and when you factor in all together, the Ford just turns out to be the more dynamically rich car here, that and the punchy diesel mill makes it a revelation to drive fast, even on inconsistent Indian tarmac. The Swift DZire is by no means bad, it’s just facing a car which has set the benchmark for handling in the compact sedan segment. 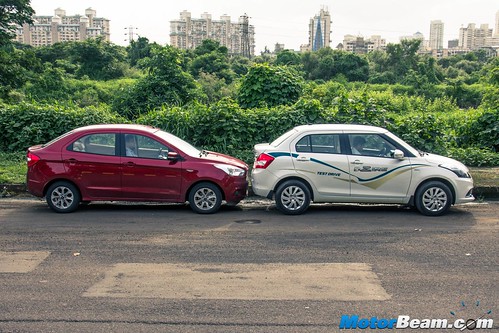 Ford scores very high on safety, all variants get airbags while top-end gets 6

Safety and After Sales Service – The Maruti DZire gets dual front airbags and ABS as standard on the top-end Z trim while the mid-level V trims get only ABS. Meanwhile, Ford has offered dual-front airbags as standard on all variants of the Figo Aspire while only the two Titanium variants get ABS. The top-end Titanium+ trim gets 6 airbags, a segment first. Ford also offers MyKey and Emergency Assistance on the Figo Aspire which are two useful safety features. The automatic model gets TCS, ESP and Hill Hold Assist. No one beats Maruti Suzuki in service with its vast network but Ford has a different approach with its child parts strategy which makes replacing parts more cost effective. 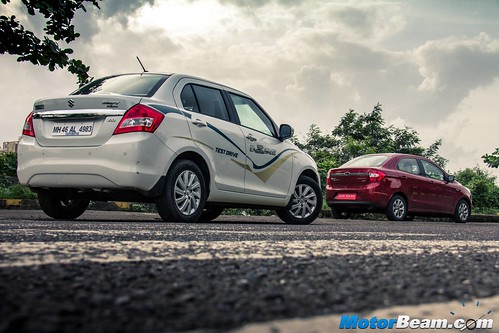 The Figo Aspire is just ahead of the DZire in most ways, making it our choice here

Verdict – The Maruti DZire is the top selling car in the compact sedan segment and although new rivals have come time and again, its sales have remain unaffected. At times, the DZire also outsells its younger sibling, the Alto, making it India’s top selling car. So yes, the DZire has a strong fan following but the Figo Aspire manages to be a better product by offering more bang for the money. Ford has done a terrific job of packaging the Aspire which not only looks better than the DZire but also drives better. The diesel mill on the American car is superior to the one on the Indo-Japanese vehicle and the Figo Aspire is also the safer car of the two. Thus the Figo Aspire is better than the Maruti DZire in quite a few areas, thereby comfortably making it our winner in this shootout.

The DZire’s biggest USP is Maruti Suzuki’s massive service network while the Figo Aspire manages to outdo the former in design, space, performance, technology, handling, braking and safety. The Ford is easily the better car in front of the Swift based sedan. 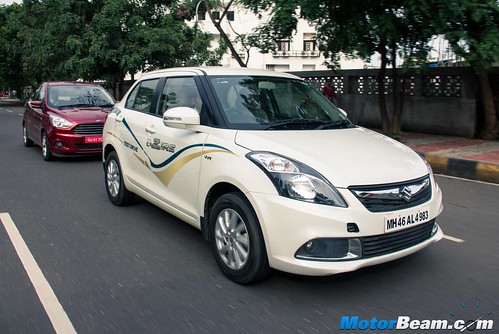 “The Swift is one of the best hatchbacks around and the DZire manages to outsell it because of the desirability of sedans in the Indian market. Where the Swift lacks, the DZire too has the same shortcomings and in front of the Figo Aspire, the Maruti simply feels a bit old now. Ford has studied the market very well and understood what buyers are looking out for, the Figo Aspire is not only practical but also a lot of fun to drive, a very rare combination in this segment.” – Faisal Khan, Editor, MotorBeam.
“The facelifted DZire does have improvements including fresher looks and more equipment but that’s not enough to fend off the new Figo Aspire as the Ford vehicle has a lot going for it. It’s rare to see a new car beat the market leader in almost all areas but the Blue Oval manages to do it with its stupendous diesel motor being the segment benchmark in terms of performance. Then there is the dynamics, build quality and space which further impress on this American compact sedan.” – Javeid Khan, Deputy Editor, MotorBeam. 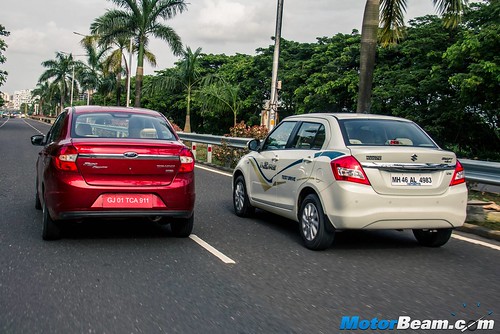