Even though there is no dearth of compact SUVs in the Indian market, many manufacturers are launching compact crossovers which are essentially tweaked versions of their respective hatchbacks. Honda had introduced the WR-V more than one year back and while it is based on the Jazz, it comes with quite a lot of tweaks, mainly to the exteriors and few to the interiors as well. Ford is the latest company to join the bandwagon and with the Freestyle, they’re actually offering a highly improved version of the existing Figo because the former gets many significant changes that up the VFM quotient of the car. We decided to put both of these cars against each other to tell you which one you should go for.

Motor Quest: The Ford Freestyle was unveiled earlier this year in India and the company terms it as a Compact Utility Vehicle (CUV). The Honda WR-V was unveiled in 2016 and the W in the WR-V stands for WOW. 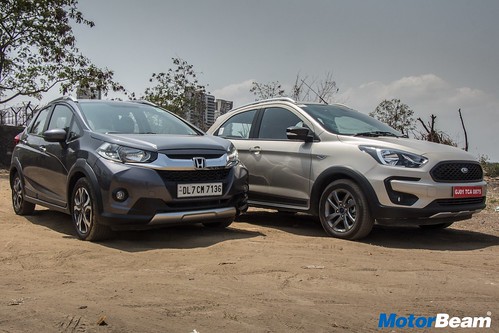 Of the two, it is the WR-V that has better road presence

Exteriors – Both the Ford Freestyle and the Honda WR-V are hatchback-turned-crossovers but in terms of sheer design and looks, it is the latter that looks more tempting and radically different from its hatchback cousin. While making a crossover, it’s a given for any manufacturer to add slightly larger alloys and a much-required body cladding to spice up the side profile. But what about the face and the rear? This is where the WR-V impresses us. Despite being based on the Jazz, the WR-V gets a distinctive front fascia and there are no similarities between the two when it comes to the front. The WR-V gets a thick chrome grille, headlamps with LED DRLs and an aggressive-looking dual-tone bumper. As said earlier, besides the black cladding and the new alloys (16-inchers), the Jazz and the WR-V are near identical. That’s not a bad thing and that brings us to the rear profile of the car. Again, Honda has managed to impress or rather WOW us. The WR-V gets distinctive-looking split tail lights and a redesigned tailgate with a dual-tone bumper. In terms of dimensions, the WR-V trumps the Freestyle and is a much bigger car. The Honda is longer and taller by 45 and 31 mm respectively and what it translates into is better road presence than the Ford. In terms of width and ground clearance though, both the crossovers are closely matched. 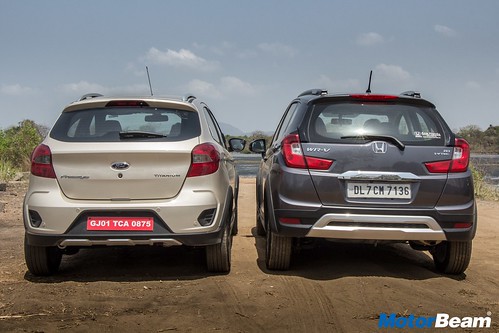 To a layman, the Freestyle can easily pass off as a Figo

Shifting focus to the Freestyle, it looks like a jacked up Figo and nothing else. The Freestyle isn’t a radically different looking car like the WR-V, that’s our point. The front fascia largely resembles the Figo and makes you wonder, hey, is this a Figo? Same isn’t the case with the Honda. The Freestyle, however, gets black treatment for the lights, grille and a dual-tone bumper with faux skid plates. The positioning of the Ford logo is different in the Freestyle. Side profile is the same story as the Honda’s but the rear isn’t. The rear profile, again, is largely identical to the Figo save for the dual-tone bumper and the revised tail-lights. So, overall, both the Freestyle and the WR-V look good in their own respects but it is the Honda that manages to look butch and bulky on the outside. 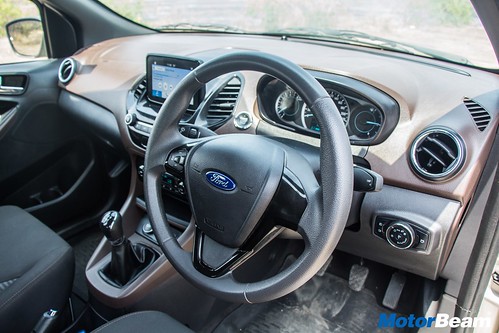 Interiors – Coming to the cabin of the Freestyle and the WR-V, both the vehicles get similar cabins as their hatchback cousins, with subtle differences though. The WR-V gets an all-black dashboard with silver inlays. Rest of the elements in the cabin like the steering wheel, instrument cluster and centre console are all similar to the Jazz. However, the WR-V additionally gets the DIGIPAD touchscreen infotainment system. 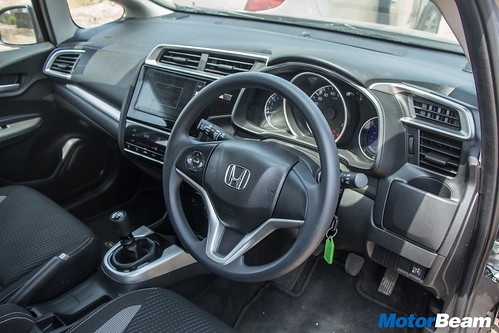 While the Freestyle’s dashboard is identical to the Figo, the former gets a dual-tone black and brown dashboard and piano black finishes on the centre console and the steering wheel. The Freestyle also gets a 6.5-inch SYNC3 touchscreen infotainment system with Apple CarPlay and Android Auto connectivity. 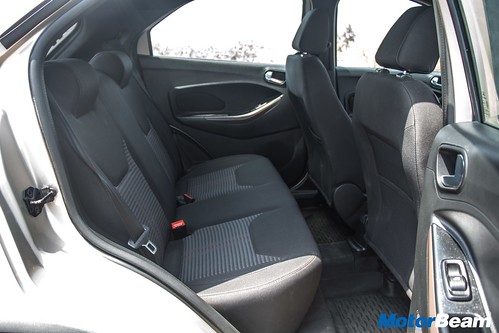 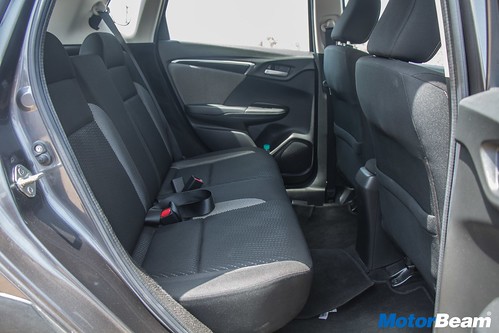 Coming to the seat comfort, the duo offers similar levels of comfort. Both the WR-V and the Freestyle offer decent knee room and shoulder room but headroom is tight, especially in the Freestyle. The rear doors in the Freestyle also miss out on water bottle holders. Rear seat headrests in both the cars are fixed. Where the WR-V is at a clear advantage is in terms of boot space. The Japanese gets a 363-litre boot which is leagues ahead in terms of practicality when compared to the Ford’s 257-litre boot.