Hero MotoCorp is the top-seller in the 2-wheeler market but in spite of leading in motorcycle sales, its presence in the 150cc space is quite diminutive. This is in spite of India’s largest 2-wheeler manufacturer having five motorcycles on sale in the 150cc segment (Achiever, Hunk, Impulse, Xtreme and now Xtreme Sports). In fact, Hero’s sales in the 150cc segment is so low that all its 150cc products combined don’t sell as much as the new kid on the block, the Suzuki Gixxer’s solo sales. Clearly something is amiss and to address the issue, Hero has been launching new products one after another. Post the arrival of the updated Xtreme, it’s now the Xtreme Sports which is vying for customers’s attention but does it deliver? A quick spin helps us understand “THE ALL NEW 15.2 BHP XTREME Sports”, just like what Hero likes to call it on its brochure. 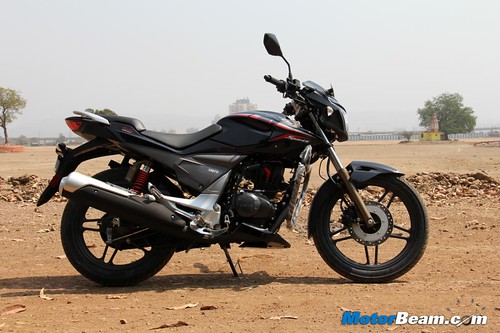 The styling is similar to the now discontinued CBZ Xtreme, yes, that’s right

It’s not secret that the new Hero Xtreme hasn’t been well received by the market. People still like the pre-facelift model and thus to rekindle the flame of the old Xtreme, Hero has brought out the old model with a new name and more power, or so it seems. Remember, in April 2011, Hero launched an update to the CBZ Xtreme and the Xtreme Sports is very much similar to that bike. So while the Xtreme gets a new design, the Xtreme Sports uses an older design and is priced at a premium, makes no sense, right? Things like some body panels, tank, exhaust, split seats and grab rails are more or less identical between the old CBZ Xtreme from 2011 and the new Xtreme Sports in 2015. Hero has given the bike what they call ‘wolf shaped’ headlight but the tail light is the same as the regular Xtreme. Overall, the Xtreme Sports isn’t impressive on the design front. 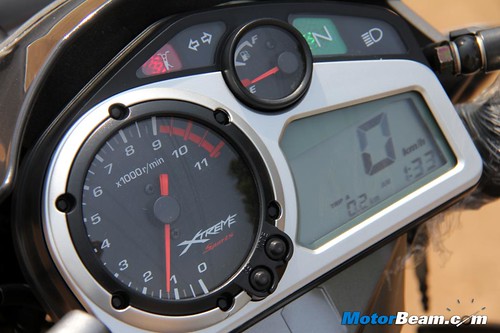 The regular Xtreme has a better console, Sports’ placement of ignition key is awkward

Similar layout with similar fonts means Hero went digging its old inventory to bring out the new Xtreme Sports and thus it misses out on an illuminated key ring, service due indicator and there is no mobile charging port under the seat, all this being present in the regular Xtreme. The bike does get a side stand indicator but the positioning of the key is weird, it’s placed above the front fork like a cruiser bike and this change seems to be done for the sake of it because the old CBZ Xtreme didn’t have it. Also, there is no engine kill switch so if you want to shut the bike at traffic signals, either you need to have arms as long as Indian cops (kanoon ke haath) or you stall the bike, the repercussion of the latter on the motor in the long run won’t be very positive. 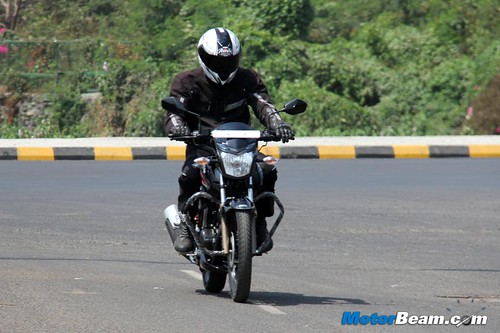 Coming to the heart of the matter, the Hero Xtreme Sports gets more power, 1 PS more than the regular Xtreme, an increment of torque by 0.7 Nm too, thanks to an increase in compression ratio. So the 149.2cc Honda power unit now belts out 15.2 BHP of peak power at 8500 RPM and 13.5 Nm of peak torque at 7000 RPM. For starters, the engine is smooth, typical of what a Honda motor is like and as you dial in the revs, you will be pleasantly surprised at the way the power comes in with vibrations not being an issue as seen on the Karizma twins. However, as you push the bike near its redline, the vibrations are felt on the pegs and they can be quite a lot to deal with, making one keep the mill in the mid-range for a smooth ride. 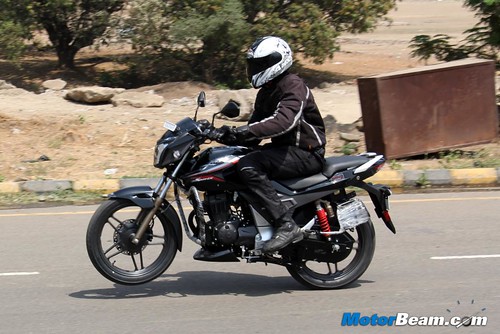 In spite of quicker acceleration, the Xtreme Sports still isn’t as quick as its rivals

On low revs, the Xtreme Sports does feel punchy and due to the narrow rear tyre (still wider compared to old Hero 150cc bikes), it is off to a quick start and should be as quick as its rivals in the 0-100 km/hr sprint (taking around 17 seconds to do the ton). Thus, the Xtreme Sports is at least a couple of seconds faster than the regular Xtreme which is quite substantial. Still, even though it has more power than its rivals, it won’t beat it in outright acceleration due to lower torque and higher weight, it is the heaviest bike in the segment, weighing in at 146/147 (rear drum/disc) kgs. A fuel efficiency of 45 km/l is expected on the Xtreme Sports which isn’t class leading but is not bad either. We found the 5-speed gearbox to offer good shifts. 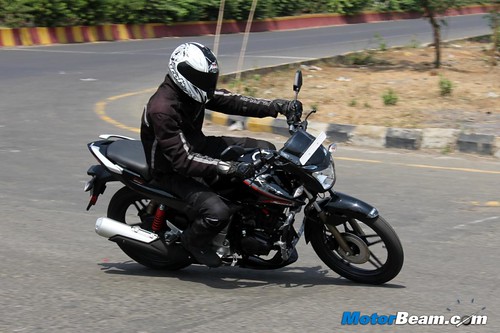 Smaller tyres, 18-inch wheels, higher weight and the lack of a monoshock suspension are recipe for lack of excitement on the dynamics front and the Xtreme Sports just won’t inspire confidence to ride hard and fast around the twisties. While it is easy to manoeuvre in congested traffic, this isn’t the bike which will plant a smile on your face when you hit the curves. While it’s stable on the straights, it doesn’t stay planted at high speeds. What is good though is the ride quality, the front suspension is soft with good travel, doing excellent bump absorption. Our test bike was equipped with a rear drum and the rear brake felt spongy with little feel on offer. The rear disc model should do better but integrated braking should be standard on this bike. Even the ergonomics aren’t perfect, the seat is too high which becomes a bother for both short and tall riders, the former having issues with their thighs while the latter sitting too high. The left side peg doesn’t have a spring action so when you engage the side stand, the peg closes and you have to open it every time you get on the saddle. 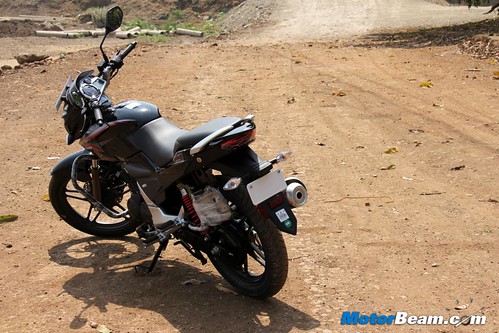 The Xtreme Sports doesn’t make a strong case for itself, it’s not the fastest in its class

So how does the Hero Xtreme Sports fare? For starters, it costs Rs. 1000/- more than the regular Xtreme which by the way has more features on offer and in terms of design itself, is fresher of the two. The price difference between the standard and rear disc variants is Rs. 3500/- which means you should opt for the latter as the rear drum offers poor feel and feedback. Thus, you end up paying as much money as its Japanese rivals which are better in multiple ways. While the Xtreme Sports boasts of the most power against its Japanese rivals, it isn’t faster, making one question the need to add power when the focus should be on reducing weight which will boost both performance and economy. The Xtreme Sports simply doesn’t make a strong case for itself and a person looking to buy a Hero bike in the 150cc segment should opt for the regular Xtreme instead.

If you must have a 150cc motorcycle from Hero, you are better off buying the regular Xtreme over the Xtreme Sports as that offers more bang for the buck with more goodies on offer. At its current price, the Xtreme Sports simply doesn’t make a strong buying proposition. 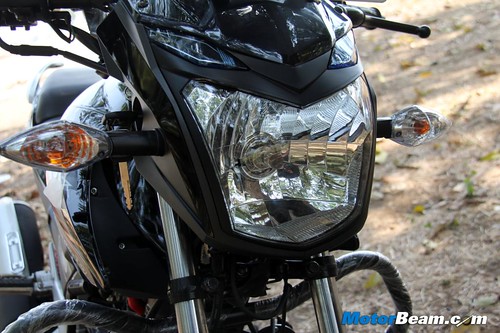 Hero needs to up the game if it wants to beat Suzuki, Honda, Yamaha in 150cc bikes

* Smooth Honda engine isn’t high on vibrations like we expected it to be
* Plaint ride quality, the Xtreme does good work in absorbing bumps on the road
* Regular Xtreme and Xtreme Sports aren’t priced too apart
* Hero’s massive service reach and cheap cost of maintenance is a big plus

* Fails to impress as a package in front of its Japanese rivals
* Increase in power not helping it beat its primary rivals which with lower power figures are faster
* Dated design and console was already seen 4 years back
* Bike’s hardware is a good 5-years old, the Xtreme Sports is pre-2010

Does This CBZ Ad Take You Down Memory Lane?