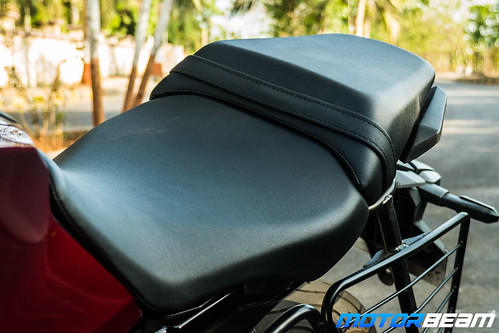 The split seat setup hardly leaves any room for the pillion

Ergonomics – As soon as you jump on the seat, you get acquainted with the compactness of this bike. The seat height is at 800 mm which means that no matter the rider’s height, the bike will fully accommodate the rider. The foot-pegs on this motorcycle are centre-set. Alongside this, the handlebar’s setting leads to an upright position for the rider. However, the cushioning is on the harder side and the space for the pillion rider is almost negligible. 41mm USD forks at the front and a preload-adjustable monoshock at the rear render many alternatives for the rider, while the swingarm is a steel-plate unit. Conclusively, the bike is set up towards a firmer side. 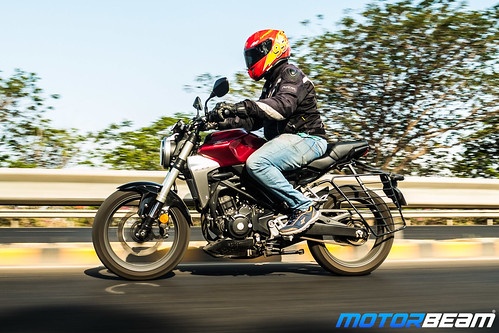 Performance – The Honda CB300R is powered by a 286cc, DOHC, single-cylinder engine churning out 30.9 BHP of power at 8000 RPM and 27.4 Nm of torque at 6000 RPM. The CB300R isn’t boastful in any sense for its power figure, however, the torque shows a massive increase by almost 7 Nm over the CBR250R. The engine is extremely refined in its performance. Additionally, the bike packs a great low-end punch with a reasonable mid-range. It struggles a lot in its high-end and redlines at almost 10,500 RPM with a top speed of 150 Km/hr. Another shortcoming is that the on and off throttle transition is quite choppy for Indian conditions. 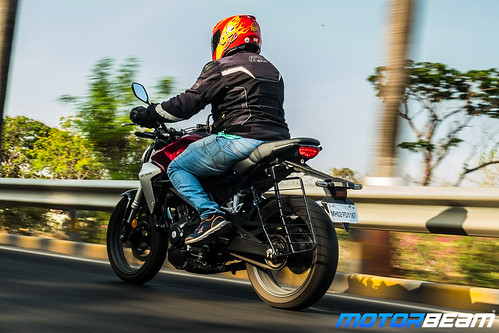 As evident as it is, the street-fighter manages very well in the heating department. The exhaust sounds quite throaty for a single-cylinder engine. The power mill couples with a smooth and slick-shifting 6-speed gearbox. But, the clutch is on the heavier side and the missing out of a slipper clutch is such a sigh! Furthermore, the bike’s low-end punch also adds up for its plausible mileage which is going to range between 25-30 Km/l. 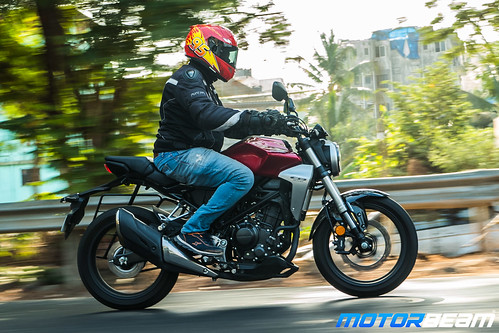 The firm suspension setup leads to a harsh ride

Riding Dynamics – The bike’s overall setup is really harsh for our bumpy roads. On the flip side, the front-end weight combining with the nimble character of this bike ensures that for one, the bike is fun to handle around twisty corners. The bike faces no issue whatsoever while reaching triple-digit speeds but we have to keep in mind the actual capability of a bike in this segment. A major breakthrough for the bike is its kerb weight at 147 kgs, which is precisely the reason for its agile nature. 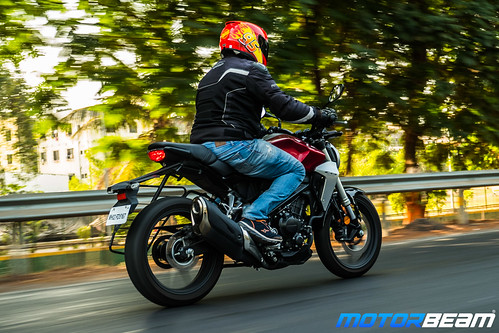