The Honda CBR250R has been on sale in the Indian market since 2011. We were expecting that HMSI would launch its successor the CBR300R but instead, the CBR250R continued to be on sale. However, to keep things interesting Honda launched the CB300R instead. The Honda CB300R is a naked street-fighter that plans to take on the KTM Duke 390 along with the BMW G 310R. We can consider this bike to be a dialled-down version of the Honda’s flagship street-fighter, the CB1000R.

Motor Quest: Honda was the first company to bring out the CBR250R in the quarter-litre segment. The CB300R, however, comes under the CB category and was debuted at the 2017 EICMA. Later on, it went on sale in Asia in 2017 itself and in the US in 2018, although, India welcomed it in 2019. It is one of the Neo Sports Cafe inspired bike. 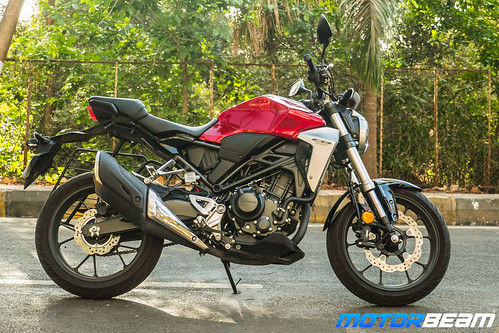 Styling – The Honda CB300R is not any motorcycle but a youngling to the CB600R and a straight descendant of the CB1000R iteration and I state this based on the looks of it. Though it’s a 300cc motorcycle, but the visuals make a clear statement. The CB300R is a dialled-down version of the aforementioned models in terms of power, weight and size as well. The bike appears pretty compact when compared to the rivals in its segment. But we cannot unsee the fact that the compactness bites back when we talk about the 10-litre fuel tank. The bikini fairing pumps the aesthetics a bit higher and also leaves the radiator less exposed. How on earth could I miss out on the round headlamp? The bike’s identity and the essence of a neo-sports cafe motorcycle are perfectly balanced by the headlamp and the styling of the bike as a whole. The Honda CB300R gets an all-LED treatment, the headlight, the turn indicators and the tail light, all of these are LEDs. 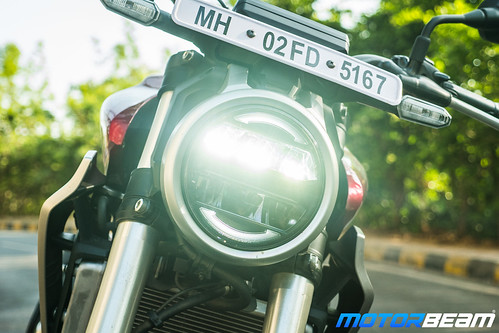 The chassis exposure is adequate like any other 300-400cc bike out there. The rear end is kept pretty clean, not too is much going around the LED tail-light, rear fender, under-seat reflectors and a short exhaust canister. The tyre hugger has been kept of adequate size as well. The only bothersome part about at the rear end is the saree guard present only on the Indian-spec Honda CB300R. The saree guard is removable so it’s more of nitpicking for the appearance. In conclusion for the looks, there’s not too much to complain about. 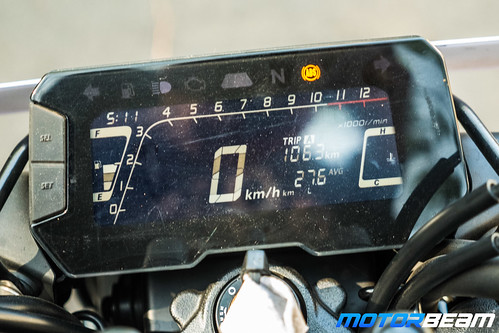 The all digital instrument cluster shows a plethora of information

Instrument Cluster and Switchgear – It is equipped with an all-digital LCD instrument cluster, with plenty of information – twin trip metres, odometer, speedometer, tachometer, fuel-meter, and even provides you with real-time fuel economy while you cruise down the roads. However, it misses out on 3 basic indicators – gear position, range and side-stand indicator. The cluster looks premium with a black surround, however, the bezels are quite thick. Similarly, the switchgear is quite premium for its segment, with a supreme fit and finish. The additional bonus here is an engine-kill switch. There is a minor catch to the switchgear, the irregular placement of the indicator switch in place of the horn is going to take some time getting used to.

Honda CB300R Production Might Be Doubled Thanks To High Demand