The Honda CBR150R is a rider’s delight, and although not very fast, it does put a smile on your face every single time.

When Honda launched the CBR150R at the 2012 Auto Expo, everybody was taken by surprise. The reason behind the shock was that the motorcycle was already present in India at the Chennai MMSC race track for Honda training school. Honda decided to enter this fast growing 150 cc segment. Just a year before that, the Honda CBR150R was updated with fuel injection in Thailand, which was subsequently launched in India. The CBR150R has been received well by the Indian market and Honda is selling decent numbers of this machine too. We ride it for longer than the usual to find out how it’s like to live with the baby CBR. 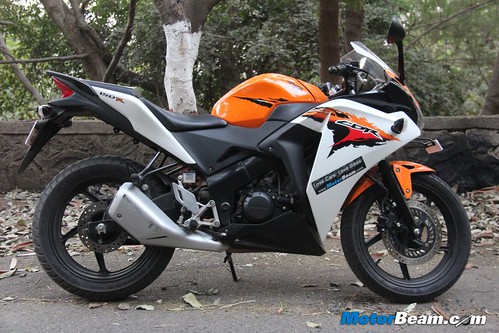 The appearance of the CBR150R is similar to that of the CBR250R. The edgy panels and the well-shaped tank looks sporty from every angle. It’s a complete attention grabber. The full-faired Honda CBR150R grabs a lot of eye balls, despite the “Repsol orange” being projected here, we think the paint and sticker job does not do justice to the design. The single Y-shaped headlight with gigantic pilot lamps looks distinctive and adds character. 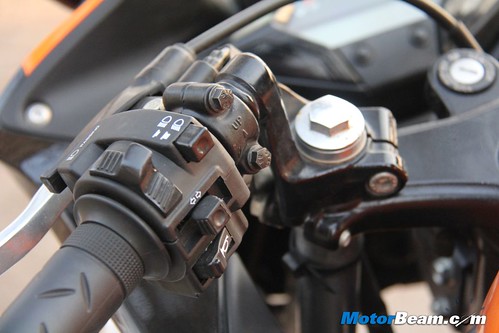 The switch gear is a massive disappointment on the Honda CBR150R. The indicators and lights are on the wrong side than usual. This means when you want to indicate, you switch on the high beam and vice versa, a thing which irritated to the very last day of the test. Neutral indicator in the middle of the speedometer looks like an afterthought. Only a single trip meter is a shocking fact at this price. The riding position is bit painful for the first 2-3 days, no back pain but wrist does take the hit. After some days on the Honda CBR150R, one gets easily adapted to the position. After you are used to the bike, long trips are not a problem. We took the Honda CBR150R for 250 kms and 500 kms weekend rides and there were no aches during the entire ride. 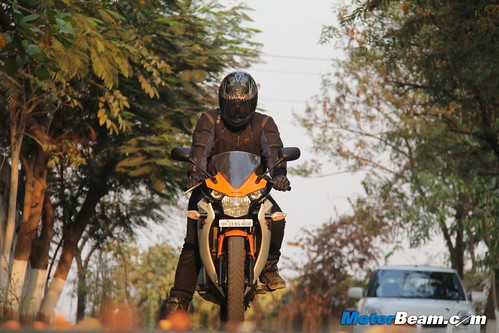 The seats for the rider and the pillion on the CBR150R are extremely comfortable, well-cushioned, proportionate size for every type of rider. We have really bad roads here, which are part of the daily commute and the ride quality truly impressed us. Ride quality is excellent thanks to the mature setup and massive 190 mm ground clearance, which also helps. The Honda CBR150R has been criticised for its poor low down torque and drivability in the city, but as the kilometers rise, one gets used to the drivability and finds sufficient grunt under 6000 RPM to keep you at pace with moving traffic. The CBR150R is easy to manoeuvre in the city, the short wheelbase helps to chuck the bike into gaps. There is no heaviness in the steering either. Heating was never an issue even in the meanest traffic jams and even if the fan comes on, it’s utterly quiet. 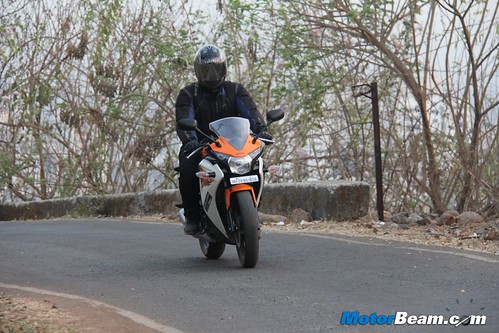 The Honda CBR150R is powered by a 149.4 cc, liquid-cooled, DOHC, 4-valve short stroke engine which produces a maximum power of 17.6 BHP at 10,500 RPM and a peak torque of 12.66 Nm at 8500 RPM. Surprisingly, the engine idles at a distinctly high, 1800-1900 RPM! The fact is, this engine is an engineering marvel. This is only a 150 cc motor but it redlines at a stratospheric 11,800 RPM. While other bikes may redline up to the same, it is not in the same tune as that of the CBR150R. It’s similar to the VTEC system which is found in Honda cars, which means, it becomes completely berserk after it reaches a certain RPM range all the way to the redline. The precise fuelling, the ballistic mid-end and the stupendous top end power are the party pieces of the CBR150R. 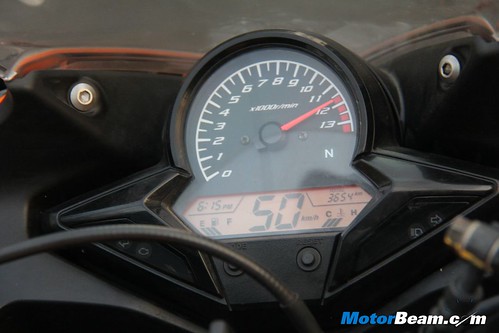 A bike which is quite under 8000 RPM, suddenly turns into an immensely loud screamer all the way to the redline. It’s the power after 8000 RPM which is highly addictive and makes it impossible to ride slow on an open or twisty road. This engine is mated to a 6-speed gearbox which is slick and smooth. Gearing is spot on but acceleration is not impressive off the line. But when it reaches the powerband, it makes rapid progress. First gear tops out at 52 km/hr, second one at 78 km/hr, third at 105 km/hr, fourth at 122 km/hr, and fifth gear takes you upto a speedo indicated 141 km/hr. The braking performance is as good as the engine performance. 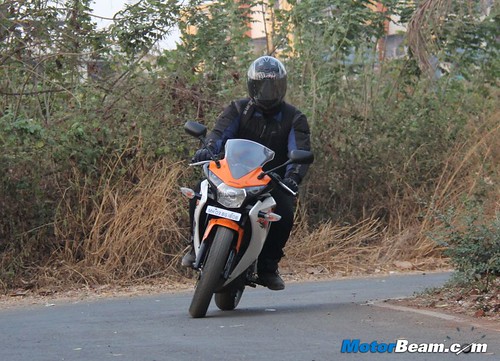 Dynamics of the Honda CBR150R are astonishing. The motorcycle responds extremely fast to steering inputs, thanks to the clever rake and trail setup. The bike turns in sharply but lacks that little bit of crispness what we would have liked. The extremely short wheelbase of 1305 mm, mature suspension setup and the able chassis makes turning the CBR150R into corners a delight. You can enter a corner at high speed and exit without any rear wheel drama and then blast away extremely quick due to the top end surge, which makes the baby CBR extremely exciting to ride. At the very limit, it runs wide, but in an entirely predictable manner, no nasty surprises. The tyres played an important role; our test bike was equipped with soft compound MRF Nylo Grip rubber which aided a lot of confidence during cornering and braking.

Apart from the slightly buzzy rear view mirrors and the windshield at higher RPMs, no rattles or vibrations were experienced even at the redline. Red line cut-out is extremely smooth with absolutely no jerkiness, the rider can hold the redline till as much time as he wants. Reserve light blinks when only 2-litres of fuel is left in the tank. Despite the service, brakes kept squeaking, a problem which is faced by owners and has not been addressed. Most production bikes are shod with TVS tyres, which are extremely hard and don’t inspire confidence when riding spiritedly. We highly recommend switching to REVZ radial tyres from MRF for leech level of grip and safety. There is wind blast at medium and high speeds and despite the helmet, it gets annoying after some time. After service, the bike’s fuel economy dropped by 3-4 km/l, maybe the valves were cleaned? (This is usually done at Honda service centres which is subjected to all bikes). Km/l number did return to normal after some 400 odd kms. 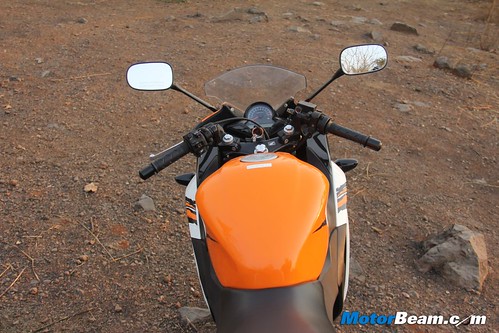 Cockpit seems messy, full of cables, not as tidy as the CBR250R. Fuel filler cap when lifted, comes in the hand; shocking fact is that the flap mechanism is omitted on the baby CBR. Spring loaded rider foot pegs are also missing on the CBR150R. Oil dip stick is black in color; you can measure the quantity, but not the quality. Rear suspension is not an adjustable unit on this Honda. In spite of riding in this changing weather and dusty area, chain lubing was not required for our entire test period and no chain noise was heard whatsoever, and the chain sprocket till the very end was lubricated. Headlights do an excellent job, illumination and spread in the dark is quite spot on. Rear view mirrors are wide enough and do an excellent job to show what’s behind. 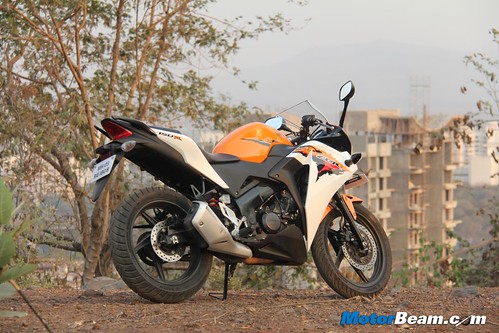 No doubt that the Honda CBR150R is an every day practical sports bike, it looks apart, it’s extremely comfortable for both the rider and the pillion, returns excellent fuel economy, has a crazy engine and equally amazing dynamics. But it lacks a lot of essential goodies at this price point. During the entire period the Honda CBR150R showed how user friendly the bike is and how it can be ridden by a newbie. While most companies give you exactly what you want with a compromise to live with, Honda on the other hand gives you a neutral, easy, everyday bike and encourages you to become better and extract as much as you can from the motorcycle. There is one thing we can vouch for too, we have tasted first blood, and it’s absolutely delicious!