This time around, Honda Drive To Discover 7 takes us through the wildlife trail of Pench and Bandhavgarh

A couple of years ago at Honda’s ‘Drive to Discover 5’, we had explored some national parks in southern India. Our troupe of Honda Mobilio’s passed through Bandipur Tiger Reserve & Nagarholle Tiger Reserve in the quest to come face to face with one of the most majestic animals to roam the planet. Unfortunately, to our dismay, the tiger eluded us despite numerous attempts. To make up for our disappointment, Honda organised the latest edition of ‘Drive To Discover’ through wildlife trail between Pench and Bandhavgarh and we hoped for better luck this time. 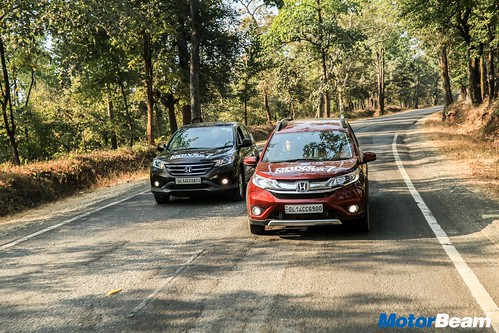 Honda’s annual event ‘Drive To Discover’ is into its 7th season and we have been religiously attending since the last 5 consecutive years. Unlike routine media drives, this is a far more relaxed event which focuses on exploring less known parts of the country while experiencing a broad range of Honda cars. The drive was flagged off from Nagpur and we were to drive to Khajuraho through the wildlife belt of Pench, Kanha, Bandhavgarh and Panna. 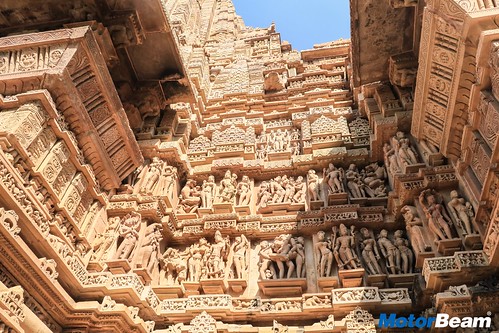 We discovered some new places and monuments during our drive

We were allotted a Jazz for the first leg of the drive between Nagpur and Pench Tiger Reserve. Just as a precaution, Honda had kept an extra spare wheel in the boot. The Jazz is known for its versatility and we could easily accommodate our luggage in the boot inspite of an extra tyre. The drive passed through majorly good roads and we cruised on the highway effortlessly with the i-DTEC delivering around 18 km to the litre. We reached our destination in a couple of hours and were ready for the more exciting part of the drive – the jungle safari. 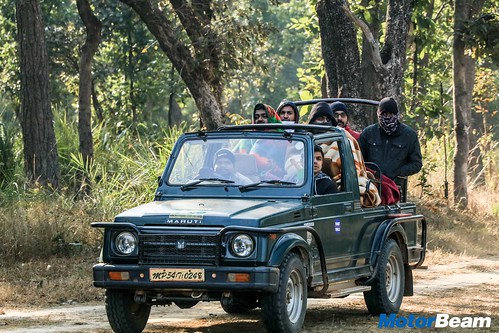 Pench Tiger Reserve is spread out over a large area of approximately 1150 sq. km and is home to around 31 tigers. Furthermore, as per the ruling of the Supreme Court, only 20% of this area is accessible to tourists. Which means nobody except the folks from Forest Department can access the major part of the reserve making it even more difficult to spot the wild cat. The gates to the core area open at 3.00 pm and we were soon inside. Private vehicles are not allowed in the reserve and we sat in the open top Gypsy scanning vividly for the wild beast. 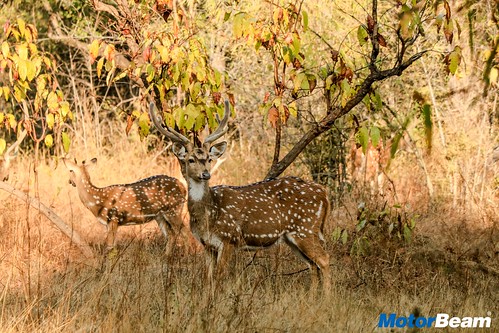 First up we spotted some deers in the jungle

The first couple of hours were mostly uneventful. We had seen enough of deer, jackals, fox and birds, but there was no sign of the tiger. We did hear the calls of the deer indicating that the tiger is on the move but there was nothing to be seen. Nature has a unique way by which the animals warn each other of lurking danger and we tried hard to listen to these signals. As the clock ticked, we knew that time is running out and chances of spotting the striped cat were getting bleak. Then it happened. A train of Gypsy’s came charging at us and as they passed, our guide stated that the tiger was on the move and we quickly turned around and followed the convoy. 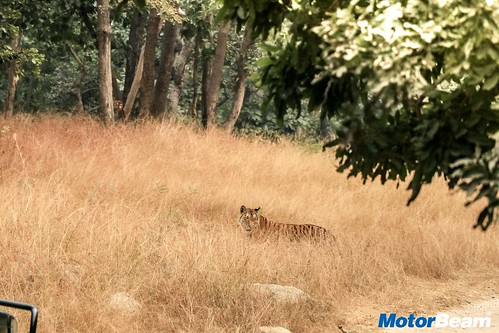 Finally we saw a young cub walking out of the woods

Everyone stopped and stared through the lush green jungle and there it was. A young cub, about 2 years old was walking out of the foliage towards us. Initially we could only see the stripes moving through the vegetation and then it came into view. Believe me, words cant express the sheer sight of the tiger in person. No doubt it has been described as one of the most majestic animal. Over 20 safari vehicles were parked to catch the glimpse of the tiger and it was least bothered by the number of people around. The guide mentioned that the tigers in the reserve are quite used to tourists and aren’t shy anymore. 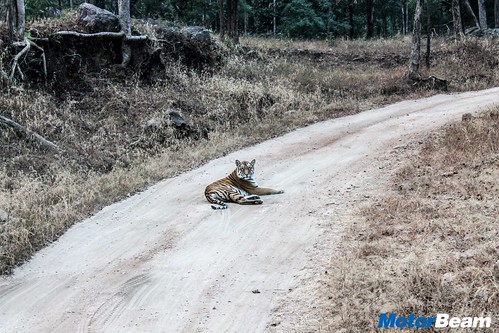 Seeing a tiger so close to you is a breathtaking experience

Next day we set out to Bandhavgarh via Kanha. On this second stint, it was the CR-V which was going to be our companion for the day. The drive was long and we had to stop for lunch en-route. Post lunch as we drove towards Bandhavgarh, we ended up losing our way. No ‘Drive To Discover’ event has been without a twist in the plot and this time we were about to get into some serious trouble. There was no mobile network throughout our drive, which meant we had to ask locals for directions and most of the times they were not accurate. As we moved towards Bandhavgarh post lunch, we ended up missing a crucial turn and ended up heading deep inside the forest. There was barely anyone inside. Few locals asked us to keep going ahead as it was a shortcut. 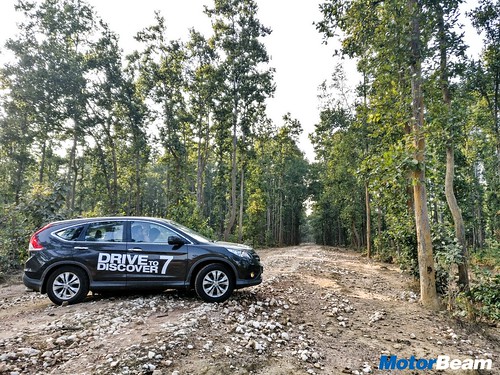 However, the forest kept getting more and more dense and we moved ahead. Getting lost wasn’t really the problem now, the CR-V runs on gasoline and was almost empty by now. With no fuel pump around, night approaching and dropping temperatures, this was heading into a nightmare. But we didn’t have an option, with a light foot, we kept moving on. The terrain was quite rough, thankfully it was the CR-V which did make it across eventually, a sedan or hatch surely wouldn’t have made it. We breathed a sigh of relief as we got to tarmac and found a fuel pump with the ‘distance to empty’ reading a mere 5 kms. Talk about some adventure. We continued on our way and reached our destination Bandhavgarh and called it a night. 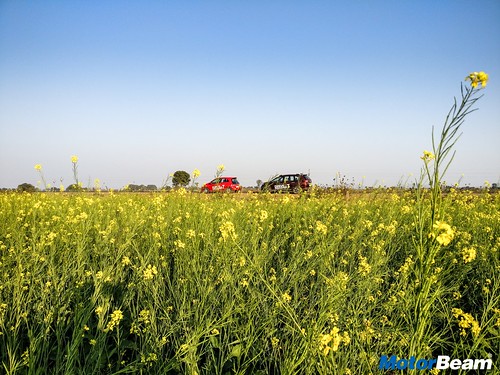 Early next morning, we were out of bed by 5 am. The temperature had dropped to 2 degrees, that’s awfully cold for someone who hails from Mumbai. The excitement levels were quite high though. We were scheduled for an early morning jungle safari and there were not one but two things in our favour. Firstly, early morning was supposed to be the best time to spot the tiger and Bandhavgarh Tiger Reserve had the highest population density per unit area making the probability of spotting the striped cat quite high. As we set out in the open safari, it was so cold that one felt the cold air blowing from inside you. However, our safari turned out to be disappointing. Over 3 hours, we heard the calls of the deer, saw pug marks but failed to catch a glimpse of the tiger. 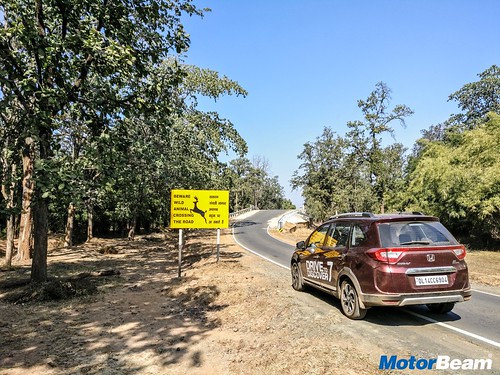 For the next route, we had the Honda BR-V at our disposal

Talking to others who had been on previous safaris made us feel a lot better. There were people who had been on as much a 10 safaris around the various national parks in India and hadn’t been lucky enough to spot the wild cat. We were certainly quite lucky as we managed a close encounter with the tiger in our very first safari at Pench. Our drive through the nationals parks was over and now we to drive to our final destination which was all about history, quite interesting one too. For the final leg, we had the Honda BR-V at our disposal and by noon we set out for Khajuraho. 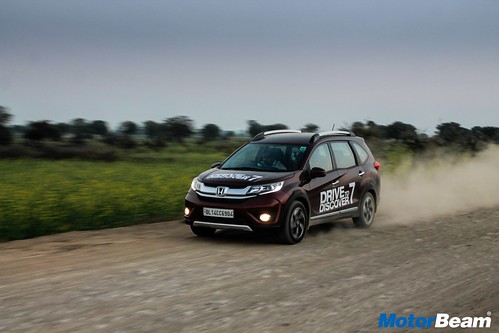 The drive to Khajuraho was mostly uneventful. It was a long stretch and we managed to take a shortcut which had a long off-road section. We were unaware as it wasn’t really marked on maps but the crossover stance of the BR-V helped us navigate this without a hitch. The route was passing along very dense forested areas and spotting some jungle animals like fox and jackals had become a common sight. We reached Khajuraho by late evening and immediately went into sight seeing mode. Khajuraho is famous for its temples which are a UNESCO world heritage site. Khajuraho is where the Kamasutra was born and the temples exhibit some very fine and explicit carving of the people in the act. The architecture is is nothing short of brilliant and it stands tall even today even though man’s understanding of engineering was limited at that time. 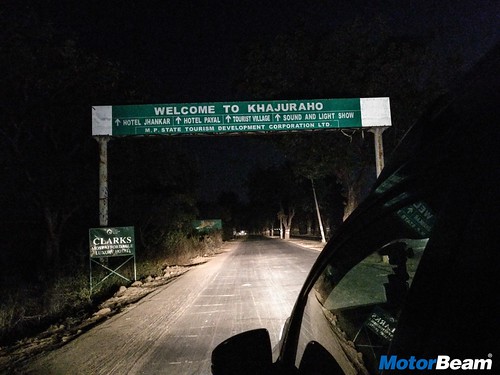 Alas, our trip has come to an end. Like always, this edition of ‘Drive To Discover’ too will be etched in our memory for a long time. The wildlife experience was surreal and it was really amazing to be up close and personal with nature. We still can’t get over experiencing the might of the tiger in person. We also had a chance to experience the durability and reliability of a range of Honda cars. Right from the Jazz to the CR-V, our drive enabled us to experience the performance and dynamics of these vehicles through some tough terrain living upto Honda’s principle of ‘Man maximum, Machine minimum’. 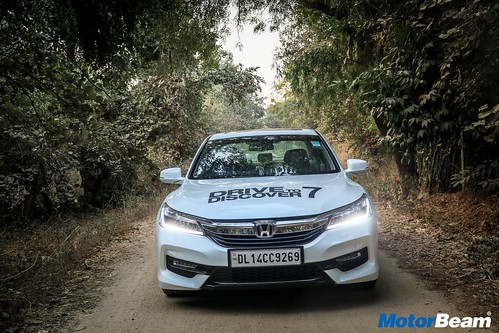